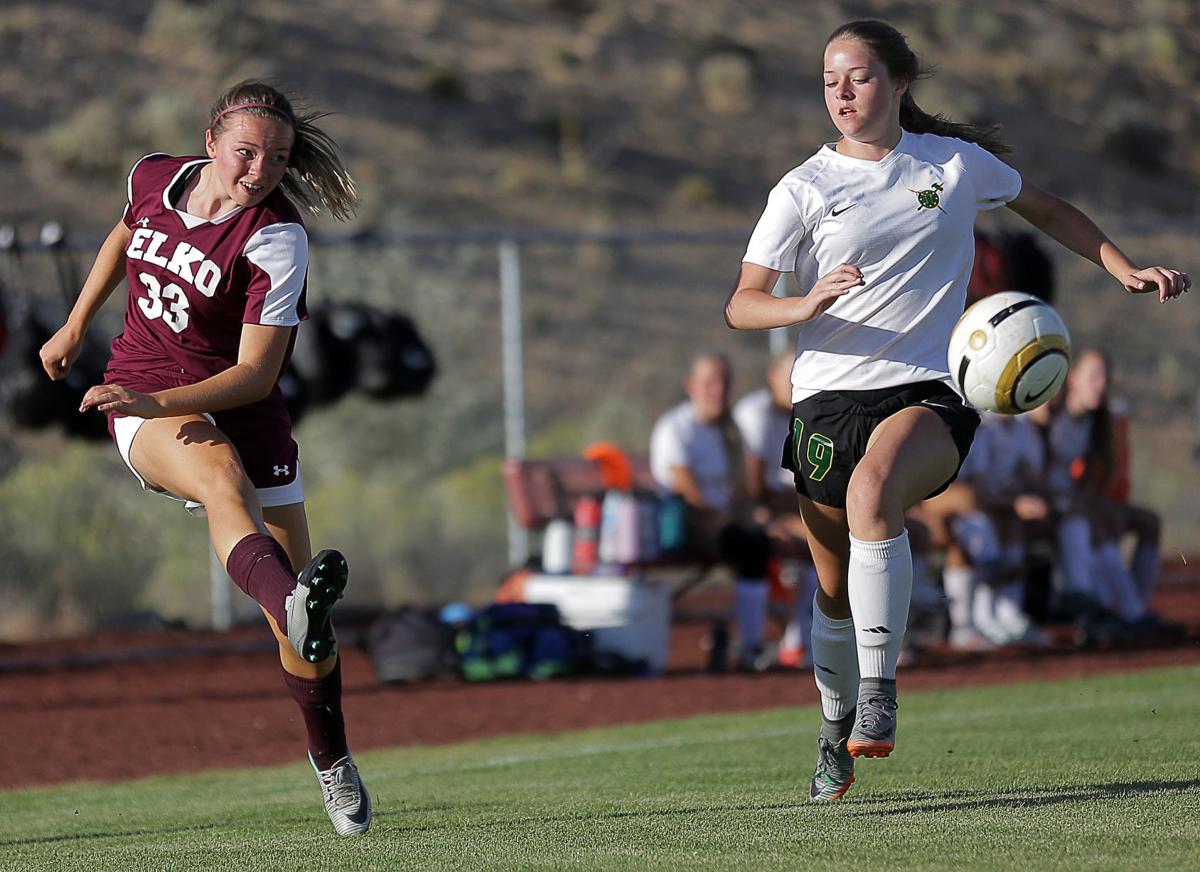 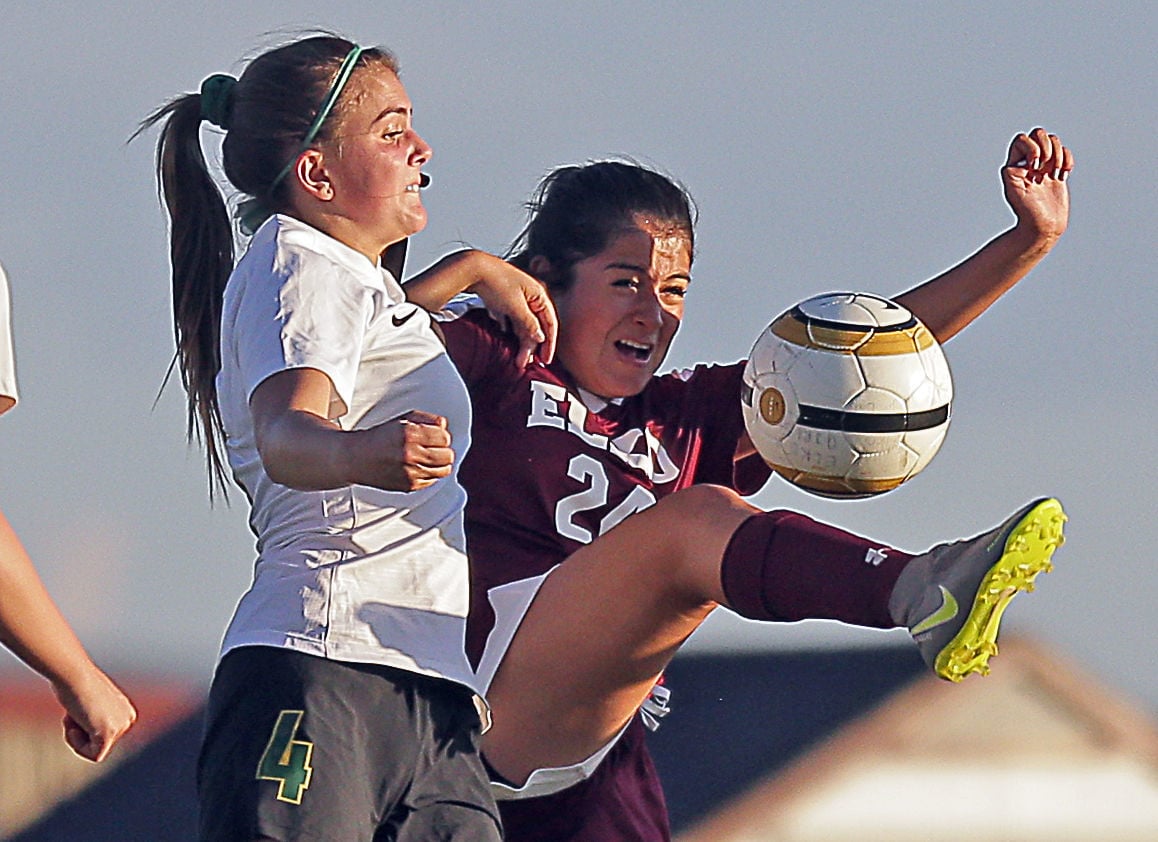 Elko's Denise Vargas, right, tries a bicycle kick in the second half Friday against Incline, at Adobe Middle School. 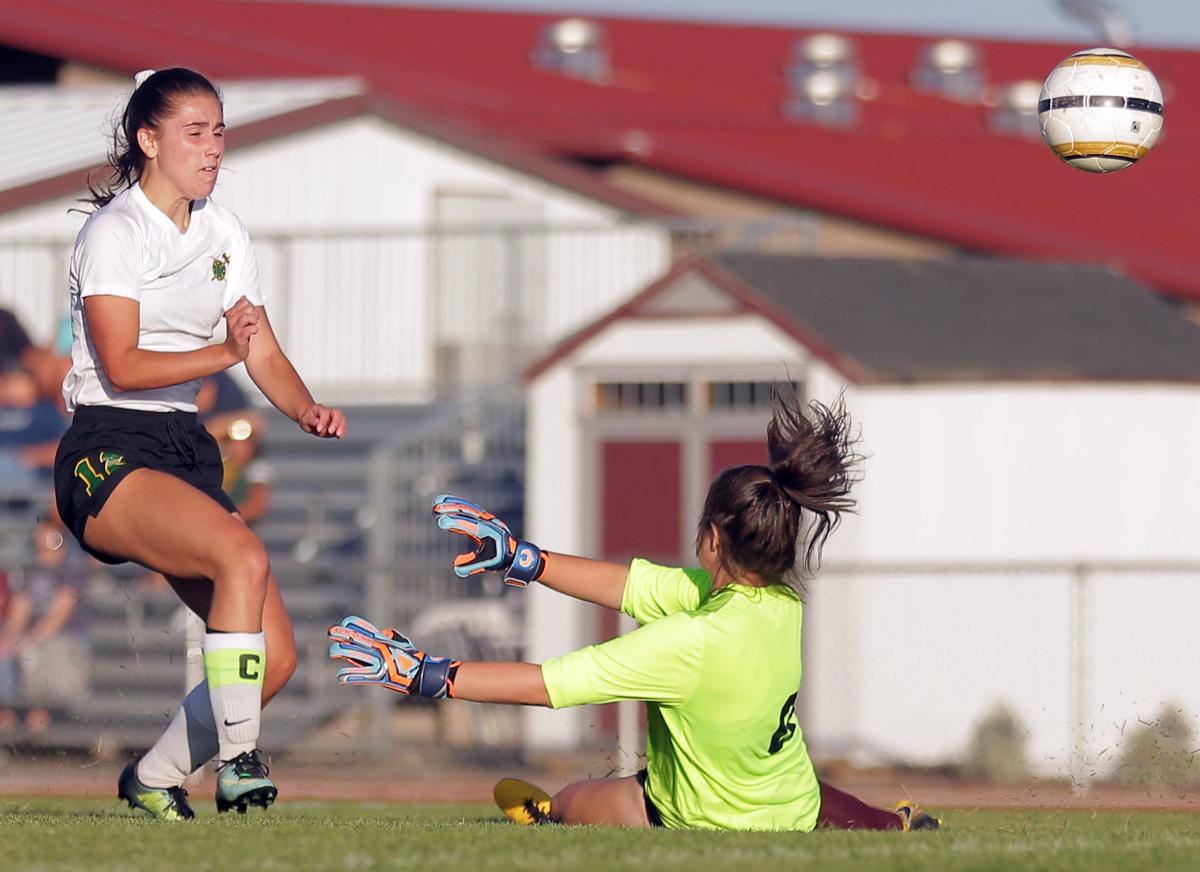 Incline's Sami Giangreco lifts the Lady Highlanders to a 2-1 victory with a chip over Elko goalie Elayna Orr in the 50th minute Friday, at Adobe Middle School.

ELKO — After winning their league opener last week, the Lady Indians won nearly every battle of their home-opening soccer match Friday against Incline — except the one on the scoreboard.

Despite playing the majority of the game on the right side of the field and creating multiple scoring opportunities, Elko did not cash their kicks — Incline did.

The Lady Highlanders scored first and last in a 2-1 victory.

Almost immediately following the opening kickoff, Elko found an open shot from near the edge of the 18-yard box but the ball was not struck well from the left wing.

Incline advanced the ball down the field with a long kick but the shot was saved by junior goalkeeper Elayna Orr.

The Lady Indians moved the ball down the right side of the field and found senior Summer Nielsen, who hit her kick on the move but the ball was stopped.

For the next handful of minutes, Elko struggled to connect passes — often kicking the ball to nowhere or sending it to Incline’s defenders.

In the 10th minute, the Lady Indians did find feet — stringing together multiple on-point passes.

Nielsen found her second attempt of the contest from distance, but the ball sailed wide to the right of the frame.

Elko got the ball back with an Incline turnover, senior Dariahn Primeaux sending a long boot directly to the goalie.

The Lady Indians fell asleep defensively in the 17th minute and had to scramble back into position, Incline earning a corner kick.

On the boot from the right flag, senior Olivia Smales headed the ball out of harm’s way initially and Orr eventually saved another attempt.

However, the defense was sloppy once again in the back two minutes later.

Incline senior Madison Corneil was the beneficiary, finding space to shoot and scoring the game’s first goal in the 19th minute.

After the wake-up call, the Lady Indians dominated the possession of the ball and the position of the field.

Nielsen crossed a pass to freshman Carly Nielsen but her header deflected off the mark.

Elko found another opportunity from the left wing, but the kick was weak and skipped left.

Freshman Avery Beatty struck a solid shot from outside the box in the center of the field, Incline’s goalie making the save.

Another pass ahead of the pack down the left wing resulted in a whiffed kick beyond the end line.

On a misplayed shot by the Incline goalie, the Lady Indians missed their chance to score — nobody crashing the middle or following the loose ball.

Summer Nielsen possessed the ball on the right wing and dropped a pass back to freshman Peyton Jacaway, who nailed a solid shot that was saved by the Incline goalie.

Jacaway found another opportunity on the left wing after a throw-in, but the shot was also stuffed.

The Lady Indians kept the pressure on and earned a foul just outside the box in the 37th minute, Primeaux’s boot flying slightly high.

After a kick from the left wing, the ball bounced off of a slide by senior Kassi Ortiz.

Summer Nielsen was there for the rebound on the right side, and her kick was true — barely — skipping under the post on the upper-right side of the frame.

The Lady Indians tied the 1-1 in the 38th minute and did not settle, nearly cashing the go-ahead score immediately after.

Primeaux set up the offense from the middle of the pitch and dished a perfect pass to sophomore Liz Luna, whose shot was thumped squarely but missed wide-left.

Elko started the second half with scoring chances in succession, passing effectively — running a give-and-go —Smales sending the ball to Jacaway for a clean look on the left side, the shot sent straight to the goalie.

Jacaway received a cross from the right wing from Summer Nielsen, the ball sent a little high and lofted to the keeper.

Incline’s goalie made another stop, diving to the ground for another tie-preserving stuff.

To take advantage of chances, they have to find the frame.

Because on the other end, Incline junior Jada Moore sent a pass ahead to senior Sami Giangreco — who leaked behind Elko’s defense — Orr advancing from the frame and sliding toward the ball, Giangreco punching the ball just before she arrived.

In the 50th minute, the Lady Highlanders grabbed a 2-1 lead.

Ortiz sent a solid pass to the middle on a corner kick in the 57th minute, and the shot was drilled by a header — the potential game-knotting shot deflected by the Incline defense.

The Lady Indians found more and more shots, but the kicks were nearly always sent directly to the stomach of the goalie.

Elko’s biggest missed chances were a direct kick by Primeaux that warped around Incline’s wall, the goalie making her best save of the game to her left side.

From a drop-ball in the box, the deflection wound up at the feet of Jacaway — who pounded a low-line drive — the shot deflecting off the bottom of the left post with around five minutes remaining.

Elko had other decent looks at the frame, but shots sailed high and over the net.

The game drew to a close with Incline on top, 2-1.

The Lady Indians dominated the Lady Highlanders in the battle of shots, Elko firing 13 attempts to just two by Incline — which scored on each kick.

Elko (1-2 in league) will look to take down a giant in its next contest, facing South Tahoe at noon Saturday, at Adobe Middle School, the Lady Vikings starting their trip Friday against Spring Creek.

TRUCKEE, California — For starting the season with a young, inexperienced roster at the varsity level, the Elko girls soccer team is playing p…

ELKO — The Elko girls soccer team — in the midst of a five-year absence of a postseason appearance — will be “almost brand-spanking new” in 2019.

Lady Spartans fire at will, draw

SPRING CREEK – After watching Incline’s weekend soccer games, it’s hard to believe the Lady Highlanders drove away from Elko County with a 1-0…

Young Elko girls soccer team continues to rack up positive results, winning a 1-0 ballgame Friday against North Valleys in the 79th minute and following with a 2-0 shutout Saturday versus Sparks.

The Elko girls soccer team found numerous shots, including a surplus of direct kicks, the Lady Indians unable to cash any goals Friday against Fallon. However, the Lady Greenwave also misfired on several good looks, the game ending in a scoreless tie. Fallon will face the Lady Spartans at noon Saturday, in Spring Creek. The Lady Indians will take on winless Lowry at 5 p.m. Tuesday, at Adobe Middle School.

After Friday's 0-0 tie versus Fallon, the Elko girls soccer team needed a victory Tuesday against winless-in-league Lowry in order to keep pace with the top of the 3A North. The Lady Indians did just that with a fast start for a 3-0 shutout W. Elko will play a pivotal, tiebreaker contest at 5 p.m. Friday, in Spring Creek.

The Lady Indians entered their road trip after a scoreless tie on Sept. 27, in Spring Creek, Elko opening Friday with a 1-0 loss at Incline and scoring a goal but giving up two Saturday in a 2-1 defeat at defending regional champion South Tahoe.

Lady Indians draw even with Truckee

On Saturday, the Elko girls soccer team found itself locked in a 0-0 tie. Fortunately, the one point the Lady Indians earned was a point that has been hard to come by for opposing clubs, doing so against defending state champion Truckee.

Elko girls soccer team moves to fourth in the 3A North with a pair of home wins, following Friday's 3-0 victory over North Valleys with a 2-0, late-surge shutout W against Sparks.

Elko's Denise Vargas, right, tries a bicycle kick in the second half Friday against Incline, at Adobe Middle School.

Incline's Sami Giangreco lifts the Lady Highlanders to a 2-1 victory with a chip over Elko goalie Elayna Orr in the 50th minute Friday, at Adobe Middle School.