Day 3: Watch as the Senate continues debate in the Trump impeachment trial

ELKO — With several key wrestlers to replace and leaders gone due to graduation, the Elko wrestling team still has some proven products to build around and incoming youngsters to mold.

The Indians will open the 2019-2020 season Friday and Saturday in Ponderosa, California.

As a team, Elko sent nine wrestlers to the 2019 Division 3A Nevada State Wrestling Championships — the Indians finishing as the 3A North runners-up and sixth in the team standings at state — and will return six of the nine state qualifiers for the 2019-2020 campaign.

Leading the way will be now-junior Zeth Kinterknecht, who won the 2019 3A North regional championship and reached the 2019 state championship at 113 pounds.

At state, Kinterknecht went 2-1 with a win by pinfall.

He opened the state tournament with a 6-2 decision over Western’s Anjelo Vigilia and followed with a fall victory against Spring Creek’s Jacob Taylor in 1:44 during the semifinal round.

For his junior season, Kinterknecht is expected to move up one class and wrestle at 120 pounds.

Elko will also welcome back now-junior Darin Legrand, who finished fourth at the 2019 state tourney as a sophomore in the 220-pound division.

He will compete in the same weight class this season.

Legrand was the 3A North regional runner-up a year ago, falling two spots at the state tournament.

At state, he posted an even record of 2-2 with a win by fall.

Legrand won his first match by a 9-3 decision versus Mojave’s Nicholas Service but lost his semifinal contest by fall in 2:42 to Boulder City’s Ryan Vanario.

In the consolation semifinal, Legrand bounced back with a pin victory in 1:22 against Valley’s John Baloyot.

Wrestling for third or fourth in the consolation championship, Legrand was pinned by a head-and-arm from Spring Creek’s Hunter Hood in 4:31.

At the upper end of the weight classes, Elko will also bring back junior Ernie Gregory — who scored four points at the 2019 state tourney in the 285-pound division and will remain at the weight this year.

Gregory, like Legrand, was the runner-up to the 3A North regional title as a sophomore.

At state, he went 1-2 — opening with a win by fall in 1:29 against Virgin Valley’s Wyatt Hillious.

However, he lost his final-two matches by pin — Sunrise Mountain’s Jose Lara closing the show in 2:31 and Boulder City’s Mike Kaposta winning by fall in 1:45 during the consolation semifinal.

As a freshman, Elliot Leaman also took second place in the 3A North regional tournament — competing at 106 pounds.

Leaman lost his quarterfinal match by fall in 3:32 to Chaparral’s Michael Garcia but answered with an 8-5 decision over Fernley’s Brody Garrett in the consolation bracket.

In the consolation semi, Leaman was pinned by Western’s Ernesto Figueras in 4:59.

Leaman will likely climb two weight classes for his sophomore season and wrestle at 120 pounds.

Elko will also return another lightweight for his sophomore season, Grant Castor also qualifying for state as a freshman — giving the Indians two competitors in the state tourney at 106 pounds.

Castor will compete in the 113-pound division this year.

He took third behind Leaman in the 3A North regional tourney and also went 1-2 at state, his order of losses and win coming in the same order as Leaman’s.

He lost his state quarterfinal contest by technical fall with the score at 18-3 against Figueras, but Castor responded with a high-scoring 16-11 decision over Pahrump Valley’s Mason Prunchak in the consolation bracket.

In the consolation semifinal, Castor dropped a 12-7 decision against Garcia.

Elko’s final wrestler with state experience is 285-pound junior Alfredo Flores, who gave the Indians a pair of heavyweight competitors at state during their sophomore years — joining Gregory.

He earned the fourth and final qualification to state during the 3A North regional tournament.

At state, Flores lost each of his two matches — being pinned in 15 seconds by Lara in the quarterfinal round and losing by fall in 55 seconds against Hillious.

Elko head coach Mitch Overlie expects “an immediate impact” from 106-pound freshman Craig Slater, as well as “various other freshman and a couple new faces in the senior class who will find their ways into the lineup.”

The Indians will be without numerous key contributors from last year’s team, including a state champion.

Carl Hansen graduated after locking down 3A North and 3A state championships at 182-pounds.

At state, Hansen went a perfect 3-0 with two wins by fall and another by major decision.

He pinned Virgin Valley’s Nate Abbott in 47 seconds during the quarterfinal round and racked up a 14-5 major-decision victory over Spring Creek’s Cody Jenkins in the semifinal.

In the state final, Hansen completed his journey for his first state championship in short order — pinning Lowry’s Anthony Peterson in 1:46 — capping a stellar senior campaign in which he finished with a 43-3 record.

Hansen qualified for the 3A state tournament three times and was a two-time regional champion, winning the 170-pound class as a junior and dominating the 182-pound division during his senior season.

As a junior, Hansen set the Elko High School record for wins in a season and pins in a season — coming out victorious 47 times and winning 36 matches by pinfall.

On May 3, 2019, Overlie was elected in the MSU Northern Athletics Hall of Fame.

With the Lights, Overlie wrestled four years and was a three-time All-American — placing sixth in the nation as a sophomore, fifth as a junior and second as a senior.

A co-captain during his senior season, MSU Northern won the NAIA national championship in 1998.

Staying with the program, Overlie was a graduate assistant in 1999 as the Lights won their second-consecutive national title – the streak reaching three straight national championships in 2000.

Elko also graduated a pair of state qualifiers in the middle weights.

In the 160-pound division, Ezekiel Stewart placed third in the regional tournament and went 1-2 at state.

He opened the state tourney with a 5-1 loss to Pahrump Valley’s Tristan Maughan but followed with a win by fall in 47 seconds against Chaparral’s Peter Larez.

In the consolation semifinal, Stewart was pinned in 1:21 by Pahrump Valley’s Dylan Wright.

Elko’s final state qualifier was Brandon Mariluch, who wrestled in the 152-pound class.

Like Flores, Mariluch gutted his way to the fourth and final berth to state during the 3A North regional tournament.

At state, he went 0-2 and was pinned in each of his matches — losing by fall in 49 seconds to Boulder City’s Ladd Cox and dropping a fall loss in 1:59 versus Spring Creek’s Caden Constable.

“Losing a strong senior class — led by state champion Carl Hansen, state qualifiers Zeke Stewart and Brandon Mariluch and contributors Gabe Cortez and Shawn Nakamura — are hard wrestlers to replace,” Overlie said. “But the young lineup will prove to have a bright future.”

The Indians will open the 2019-2020 season Friday and Saturday during the PONDO Duals, in Ponderosa, California.

ELKO – The northern lights, also known as aurora, are not just simply the natural display in the Earth’s sky – predominantly found in at the N…

WINNEMUCCA – Entering the 2018 Division 3A state wrestling tournament as one of the clear favorites to win a state championship, Elko’s Carl H…

FERNLEY – When the points were tabulated after the Division 3A North regional wrestling tournament, only one exceeded the total set by the Elk…

Wrestling: Not simply for the boys anymore

ELKO – Wrestling is a sport of toughness, grit, a physical and mental grind.

Elko finishes 6-2 in 3A North duals

SPRING CREEK – The Elko wrestling team put together solid performances at the Division 3A North duals, both individually and as a team.

HEBER CITY, Utah – At the Rockwell Rumble, the Elko wrestling team was held in check.

SPRING CREEK – A trio of wrestlers led the Elko Indians to a top-10 finish Saturday.

RENO — Of 107 teams at the prestigious Reno Tournament of Champions, 87 finished ahead of the Elko wrestling program.

Despite limited team success at the Wiley Dobbs Invitational from Dec. 21-22, in Twin Falls, Idaho, three Elko wrestlers placed in their weight divisions — led by a champion at 120 pounds.

As a team, the Indians finished 18th of 29 teams with 50 points — all but 11 points coming from two grapplers at the 46th annual Buhl Invitational.

As a unit, the Indians ranked ninth of 27 teams with a score of 92 points during the Spring Creek Kiwanis Invitational. Individually, Elko was led by runner-up efforts from freshman Craig Slater and junior Zeth Kinterknecht. 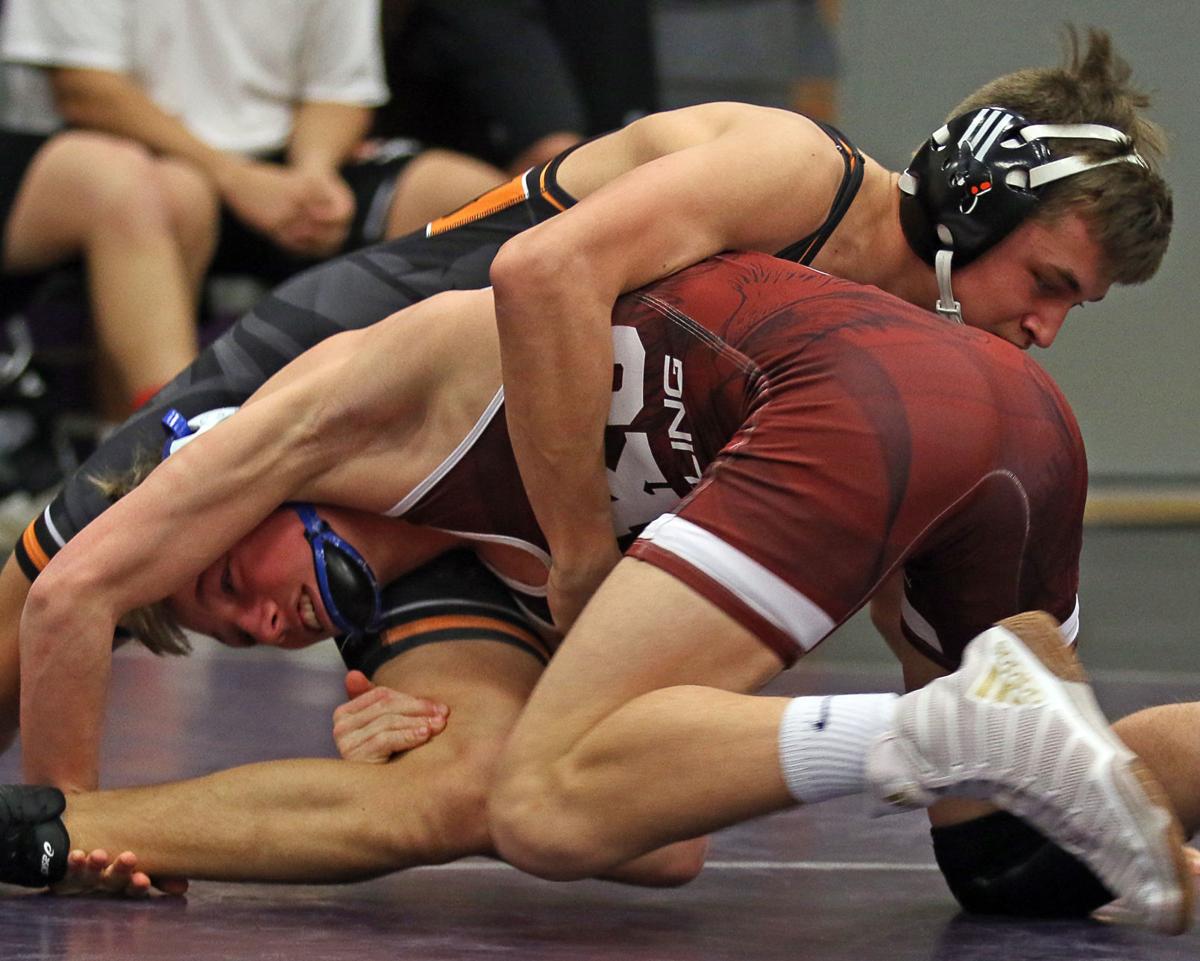 Elko's Zeth Kinterknecht snags a single-leg takedown versus a Fernley opponent during the Division 3A North duals on Jan. 26, 2019, in Spring Creek. Kinterknecht finished the league duals with an 8-0 record in the 113-pound division. 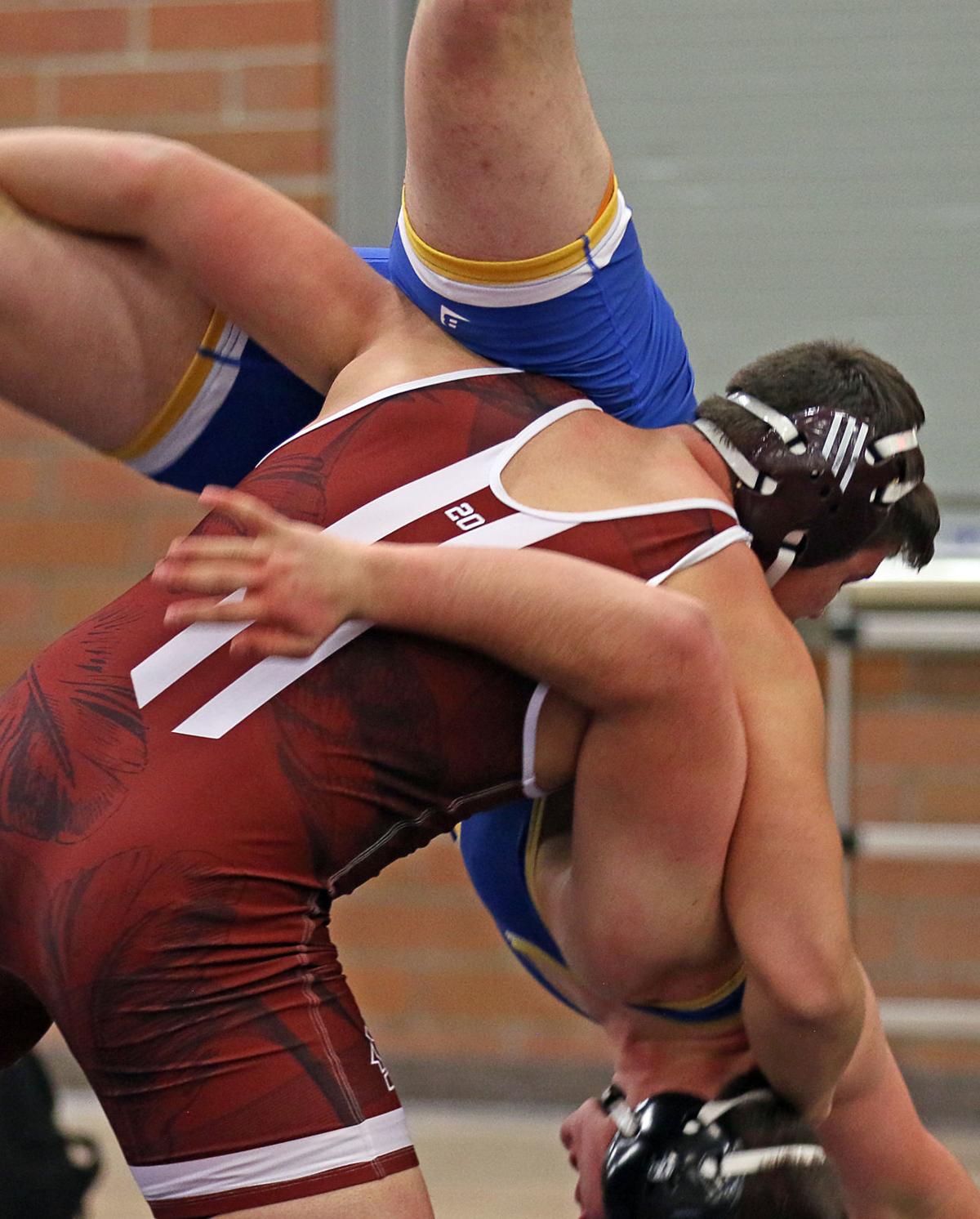 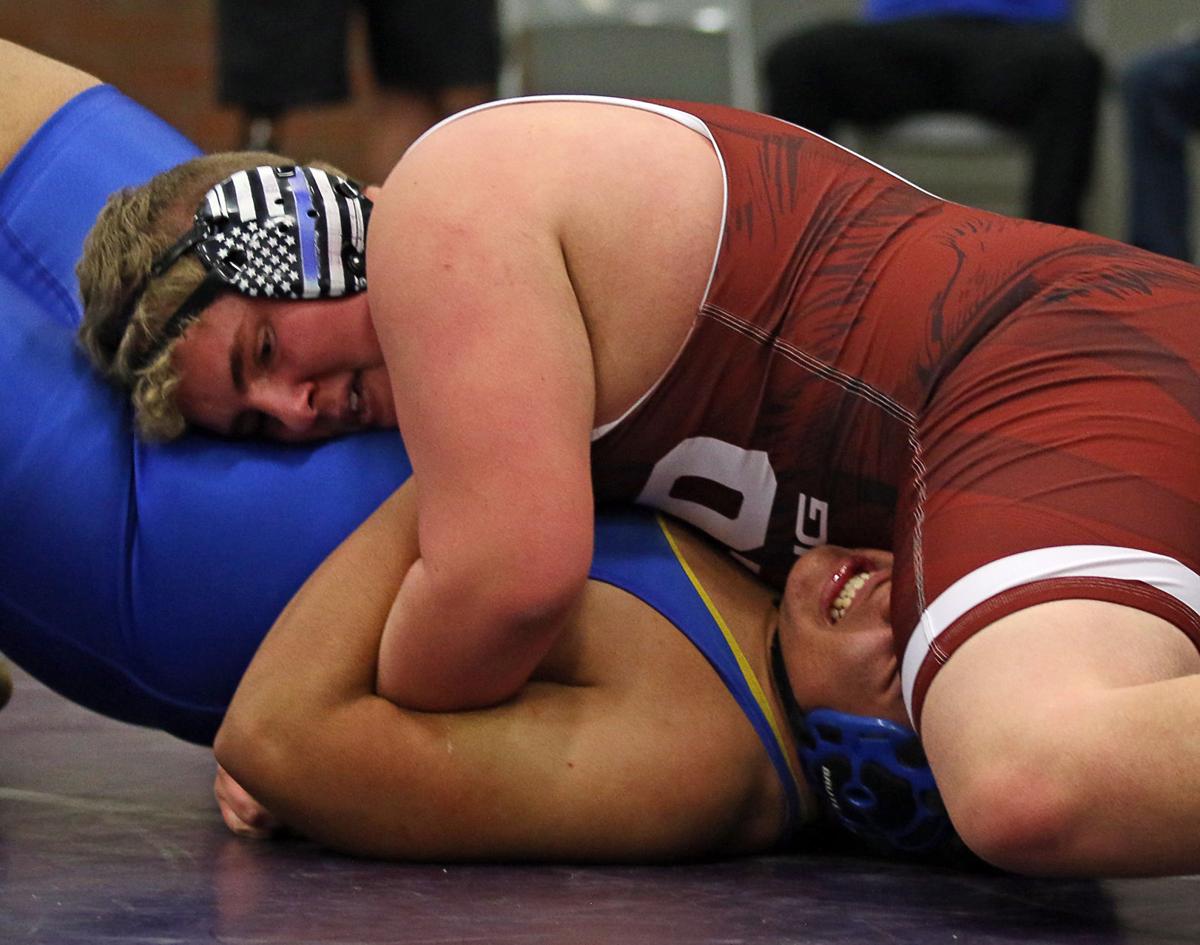 Elko's Ernie Gregory notches a quick pin during the Division 3A North duals against a South Tahoe opponent on Jan. 25, 2019, at Spring Creek High School. 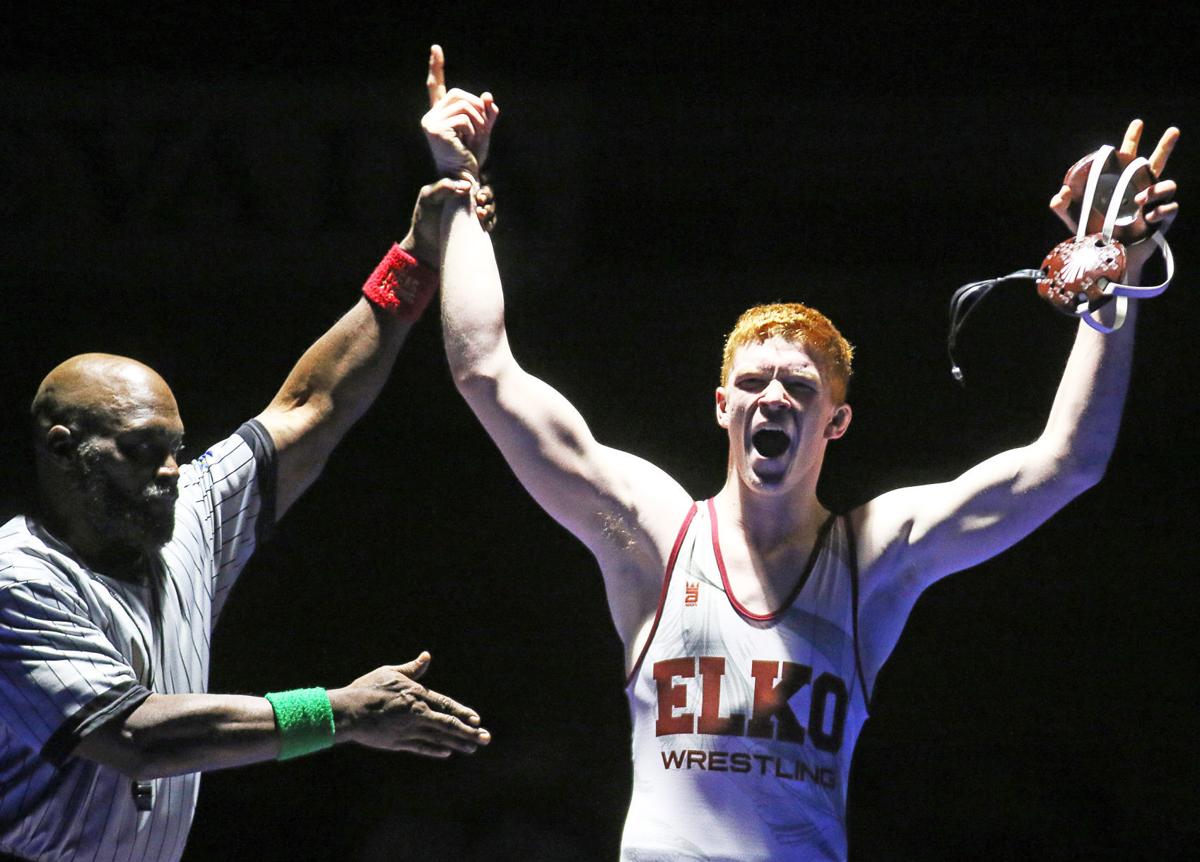 Elko's Carl Hansen shows jubilation as his hand is raised as the Division 3A 182-pound state champion after pinning Lowry's Anthony Peterson in 1:46 in the state final on Feb. 9, 2019, at Winnemucca Events Center.