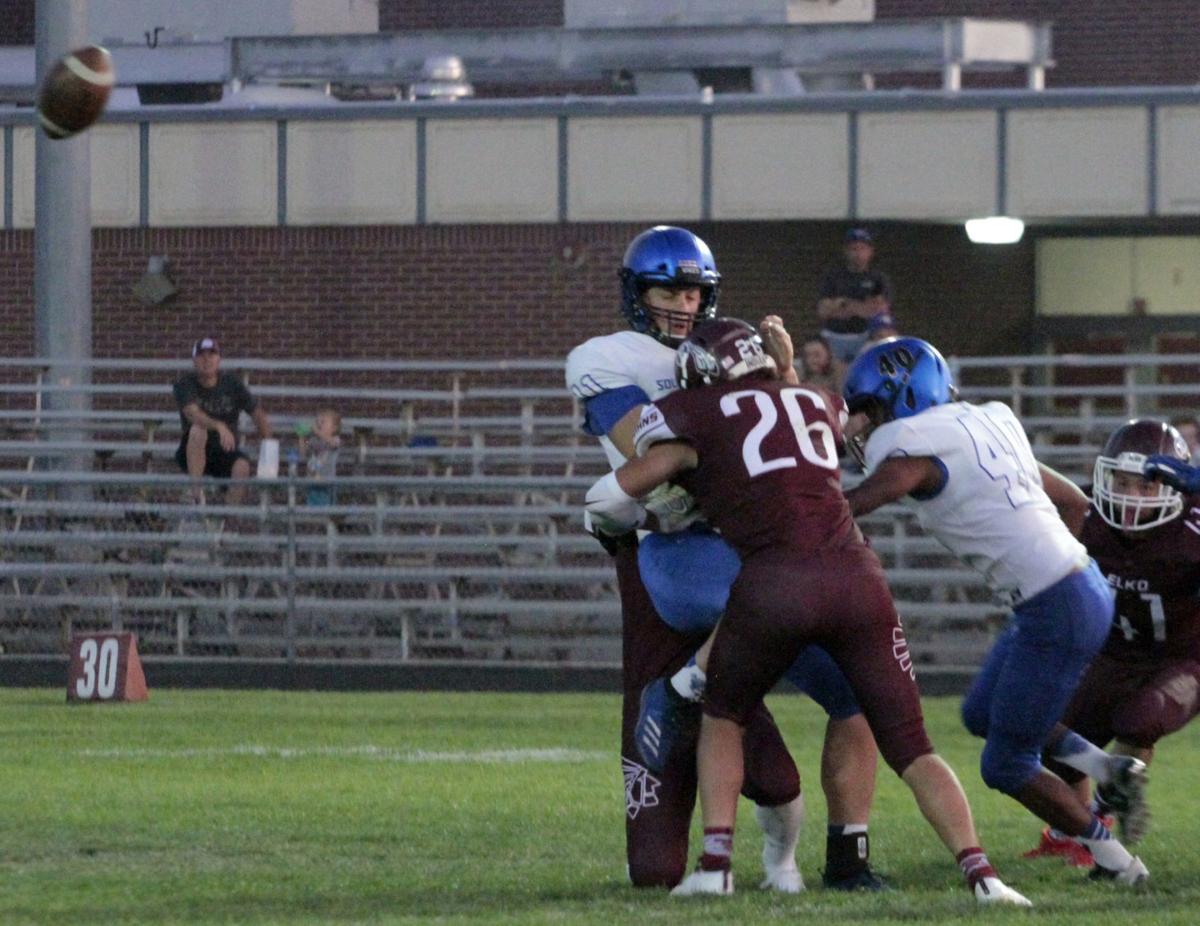 Elko's Cameron Marvel lays a hit on a South Tahoe player Friday night during the Indians' season opener at Warrior Field. Marvel had a great offensive game as well, rushing for 213 yards with a touchdown. Elko won the ballgame by a final score of 36-12. 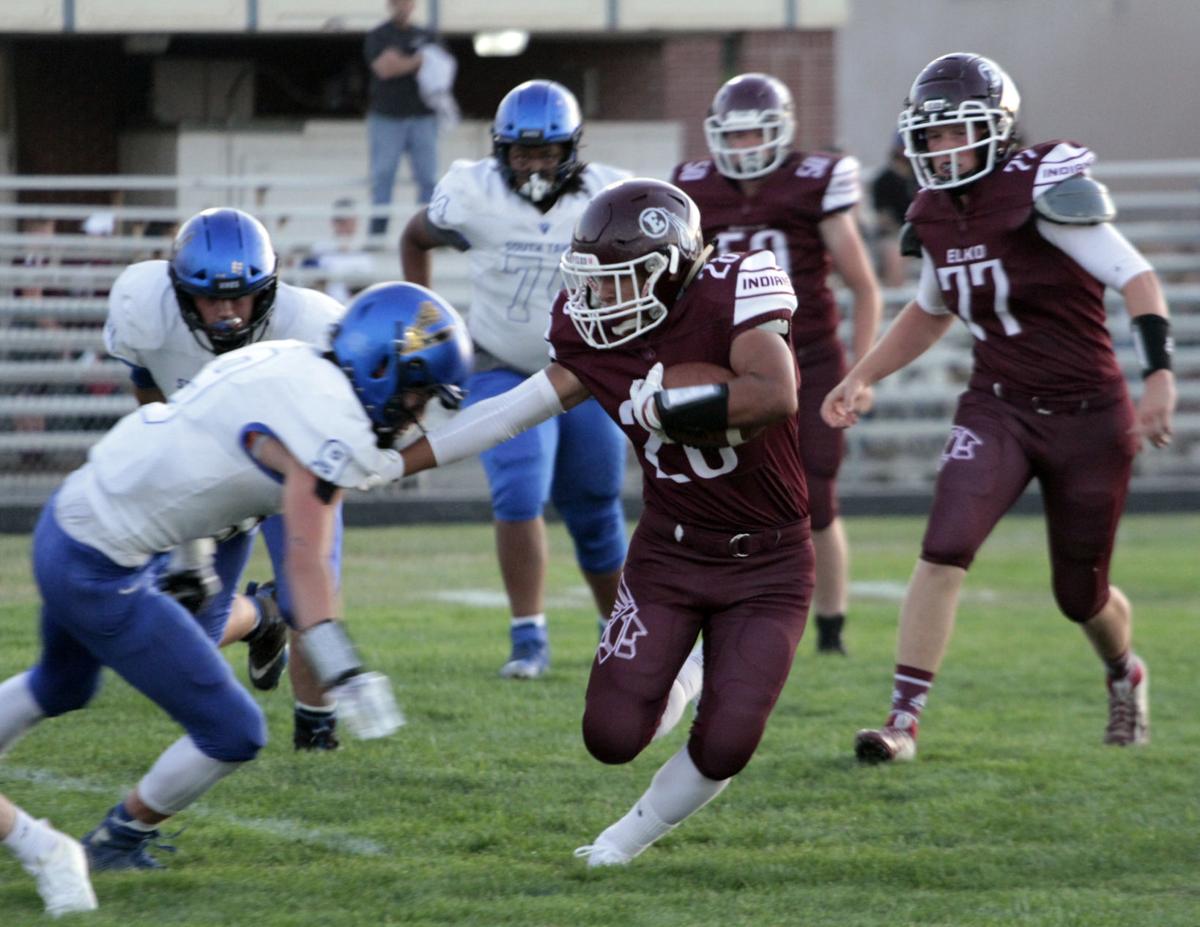 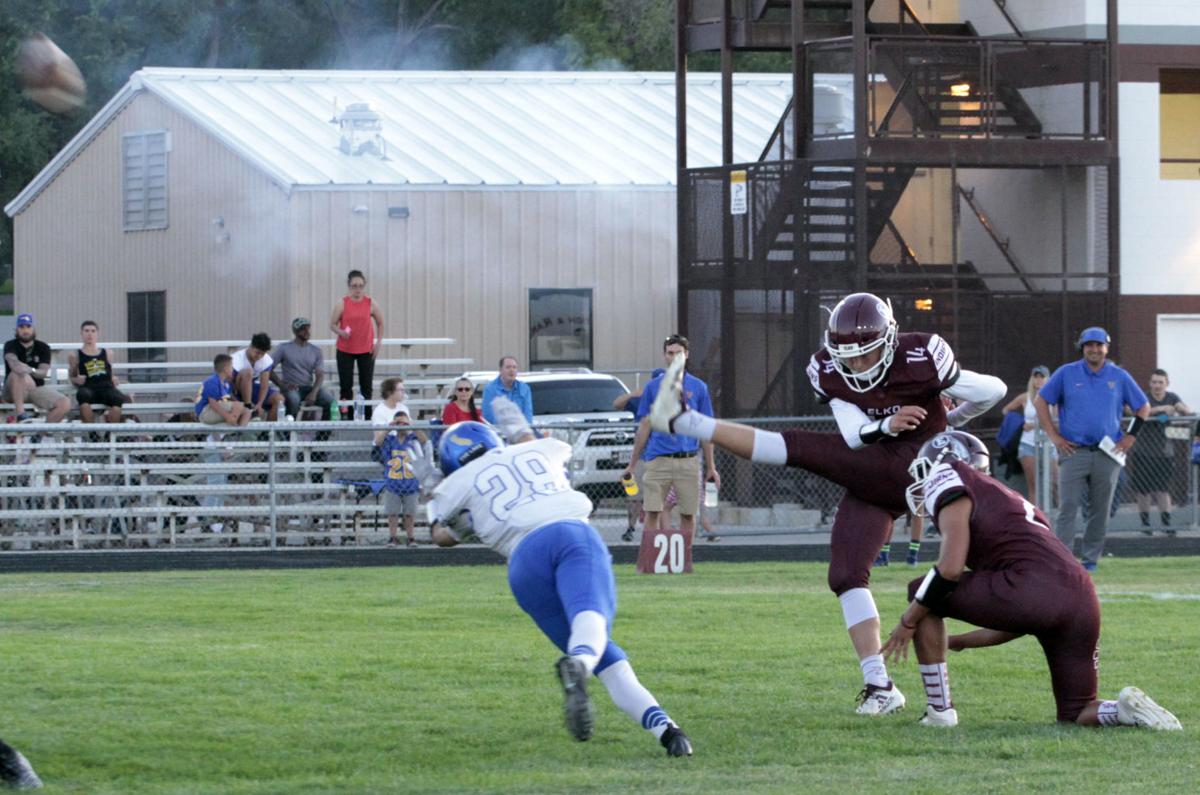 Elko's Jake Zeller (14) kicks the ball Friday against South Tahoe, at Warrior Field. Zeller completed 5-for-9 passes for 65 yards with a touchdown, rushed for 62 yards and another score and made 3-for-5 extra points and nailed a 30-yard field goal. Zeller and the Indians will welcome Lethbridge (Alberta, Canada) Collegiate Institute at 6 p.m. Saturday, at Warrior Field.

ELKO — One game in with a new roster, the Elko football team has to feel fairly good about itself.

The Indians kicked off the 2019 season at home Friday night – hosting South Tahoe – and Elko did not show much mercy for the Vikings in the season opener.

Elko was dominant from the onset, never trailing in the contest — opening a 7-0 advantage in the first quarter and extending to a 20-0 halftime lead — pulling away for a 36-12 victory.

The Indians controlled the line of scrimmage and ruled the number of offensive plays, snapping the rock 71 times and limiting the Vikings to 47 offensive plays.

Elko needed to throw the ball just 10 times, junior Jake Zeller completing 5-of-9 passes for 65 yards with a touchdown and no interceptions — junior Lincoln Ratliff completing his only attempt for 19 yards.

On the ground, the Indians were remarkably efficient.

As a team, Elko carried the ball 61 times for 401 yards — averaging 6.6 yards per tote — punching in four rushing TDs, one each by four ball carriers.

Leading the way with a monster night was senior Cameron Marvel, who racked up 213 yards rushing on 14 carries with a touchdown.

Zeller also notched 14 carries, picking up 62 yards and punching one attempt to paydirt.

Junior Kaiden Cervantes topped the roster with 15 carries, finishing with 53 yards rushing and a score.

Elko’s other rushing TD came from the legs of senior Rolando Acosta, who carried six times for 34 yards.

Acosta made a 22-yard reception and Ratliff’s lone grab went for 13 yards.

Defensively, senior Nick Kinder flew to the football — leading the Indians with 12 tackles.

Marvel and Ratliff each finished with four tackles.

In the kicking game, Zeller made 3-for-5 extra points and nailed a 30-yard field goal.

He averaged 39 yards per punt on two boots with a long of 45, placing each punt inside South Tahoe’s 20-yard line.

In the return game, junior Brayden Barnhurst broke a 30-yard gain on his only chance.

After a 1-0 start to the season and league play of the Division 3A North, Elko will take on a non-conference opponent from outside the country.

ELKO — For the Elko football team, Friday’s season opener will serve as a number of firsts.

Indians have much to replace, learn

ELKO — After one of the more successful seasons in recent years, the Elko football team must start from the bottom up.

ELKO — Elko football coach Luke Sellers said “there haven’t been many, if there’s ever been one.”

ELKO — The first-ever meeting between the Elko football team and a Canadian opponent came down to takeaways and turnovers.

Elko football team looks for 3-0 start with third-consecutive home game, returning to 3A North action against North Valleys at 7 p.m. Friday, at Warrior Field. Here's a look at the matchup versus the Panthers.

On Friday night, the Elko football team saw a 20-0 lead evaporate — the offense going nowhere and the defense unable to make stops late — the Indians surviving a huge rally by North Valleys with a late one of their own.

With 59 seconds remaining, the left-footed boot by senior Jake Zeller lifted the Indians to a two-point victory of 23-21.

Elko survived a fourth quarter rally with one of its own for a 23-21 win over North Valleys and improved to 3-0 on the season. How will the inexperienced Indians react to their first road game of the season in their bid for a 4-0 start at 7 p.m. Friday, in Sparks?

Elko shut down, shut out at Fernley

Elko football team (4-1 overall, 3-1 in league) falls for first time of the season with a 30-0 shutout loss at Fernley. The Indians will look to rebound at 7 p.m. Friday versus Truckee, at Warrior Field.

Coming off a 30-0 shutout loss at Fernley, the Indians (4-1 overall, 3-1 in league) will need to take care of the football , move the chains and get off the field defensively against Truckee (3-3 overall, 2-2 in league) — kickoff set for 7 p.m. Friday, at Warrior Field.

Elko looks for rebound on homecoming

The Elko football team will look to end a three-game losing streak, the Indians hosting No. 2 Lowry for homecoming at 7 p.m. Friday, at Warior Field.

How does No. 6 Elko approach its first-round playoff game at No. 3 Truckee following a 40-point shutout loss? On Oct. 4, Elko (4-4- in league) lost a 23-12 home game to the Wolverines (6-2 in league) — the score closer than the game between the lines — each team committing a multitude of penalties and the Indians scoring an inconsequential touchdown with little time left on the clock. The Indians will kick off at 7 p.m. Friday, in Truckee, California.

TRUCKEE, California — The Truckee football team advanced to the next round of the Class 3A Northern League tournament on Friday night, dominat…

Elko’s Ratliff: Down under, mate — Junior earns football selection for Down Under Bowl

Many folks live out their lives without ever fulfilling dreams of traveling to pristine locations or crossing things off their bucket list. Elko High School junior Lincoln Ratliff will not be one of those people; granted the opportunity to play a game he loves on the Gold Coast of Australia.

Check out what Elko senior Rolando Acosta is up to and where he will he play collegiate football!

Strap up the helmets: Elko football team will rely on size

Paint up, Tribe fans! Elko football is on the way!

Elko's Cameron Marvel lays a hit on a South Tahoe player Friday night during the Indians' season opener at Warrior Field. Marvel had a great offensive game as well, rushing for 213 yards with a touchdown. Elko won the ballgame by a final score of 36-12.

Elko's Jake Zeller (14) kicks the ball Friday against South Tahoe, at Warrior Field. Zeller completed 5-for-9 passes for 65 yards with a touchdown, rushed for 62 yards and another score and made 3-for-5 extra points and nailed a 30-yard field goal. Zeller and the Indians will welcome Lethbridge (Alberta, Canada) Collegiate Institute at 6 p.m. Saturday, at Warrior Field.