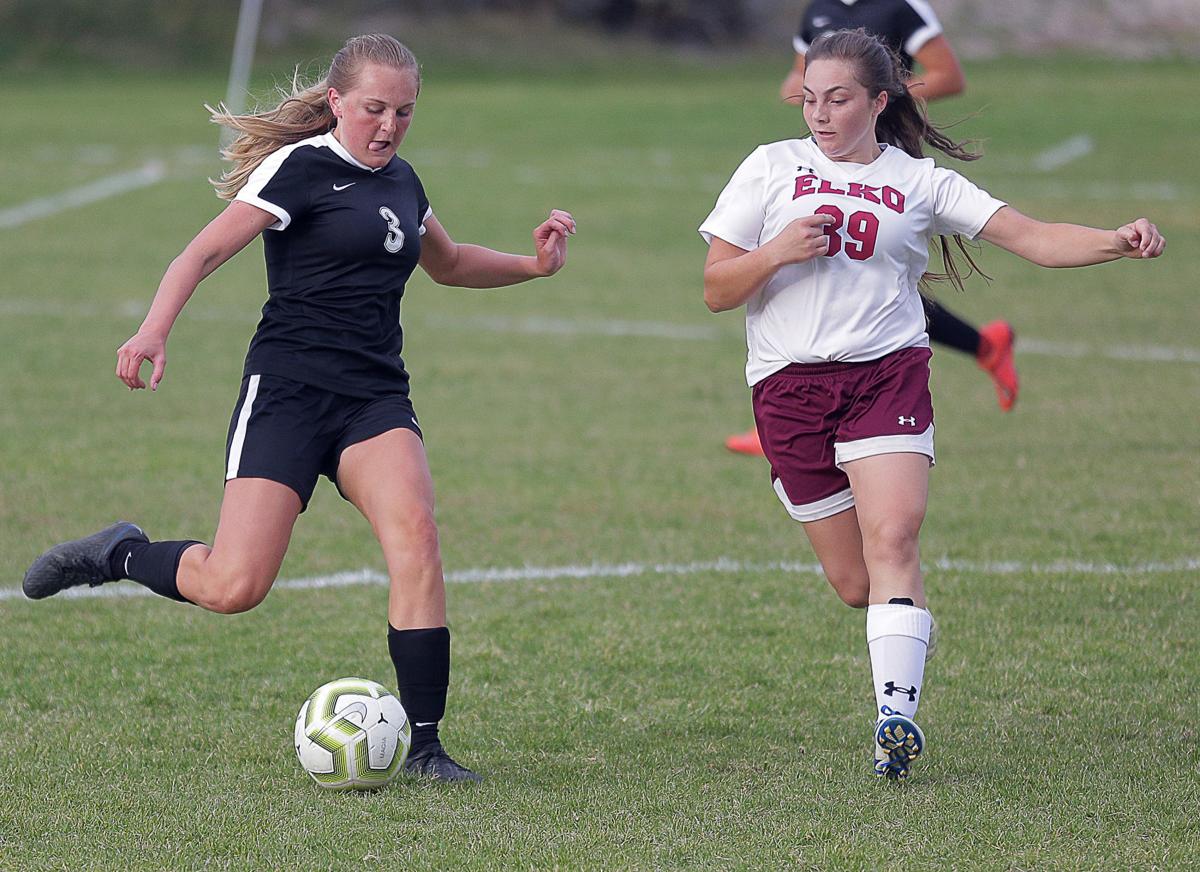 Spring Creek's Libby Murphy, left, sets for a kick Friday against Elko's Kaitlyn Walton, in Spring Creek. The teams entered the match tied in the league standings and played an even contest, battling to a 0-0 draw. 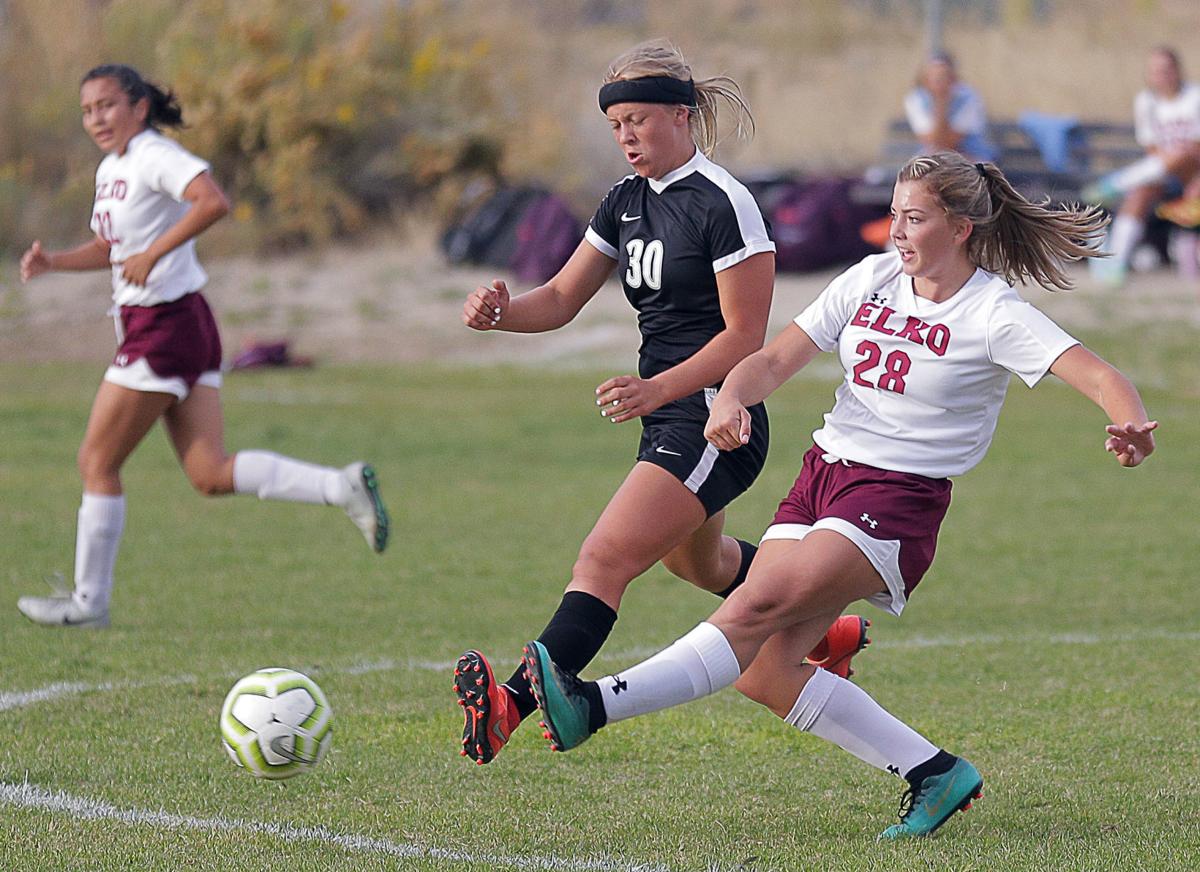 Elko's Dariahn Primeaux (28) makes a pass to the wing in front of Spring Creek's Shyann Lamb (30) on Sept. 27, 2019, in Spring Creek. The game centered around the middle of the field, and neither team was able to break through for a game-changing goal in a 0-0 tie.

Entering the contest tied in the league standings, it was only fitting for the contest to end as a scoreless draw.

In the early portion of the first half, Spring Creek found the better of the field position — the Lady Spartans possessing more frequently and winning the majority of the balls out of the air in the midfield.

In the 12th minute, Elko began to change the field position — passing with better accuracy and making better first touches — leading to a shot for freshman Peyton Jacaway that saved by junior goalie Betsy Fellows.

For much of the first half, the action was back-and-forth — give-and-take — neither team mounting a lot of serious threats, the game playing out between the 18-yard boxes and near midfield.

Senior Dariahn Primeaux found a look from distance for the Lady Indians, but the ball sailed long and wide to the left.

On the other end, Orr came forward for a scoop as Spring Creek junior Ashton Moon bared down from a long pass.

Junior Lydia Binger tagged a shot for the Lady Spartans, the attempt winding up long and wide-right.

As was the case with Orr, Fellows also advanced from the frame and snagged a ball off the grass as Elko made a charge to toward the box.

Passes from both teams were often struck with too much force, the ball beating potential runs down the pitch.

Jacaway tagged another shot for Elko, Fellows on the stuff for Spring Creek.

Fellows made another nice grab after a solid deflection by Binger on an Elko shot, and senior sweeper Olivia Smales got back in transition for the Lady Indians and made a great play against a promising-looking attack down the right side of the field.

Toward the end of the half, senior Libby Murphy booted a kick for the Lady Spartans — Orr making the save — a direct kick flying high and long to close the first 40 minutes.

At the break, Elko and Spring Creek found themselves deadlocked in a scoreless fight.

Opening the second half, sophomore Shyann Lamb drilled a long shot for the Lady Spartans from the right wing — the ball sailing over the crossbar.

One of the closest either team came from scoring happened immediately after, Jacaway dribbling down the middle of the field and smoking a low-liner — Fellows diving for a stop to her right.

The ball momentarily bounced free, Elko’s follow not in time to hit a rebound before Fellows recollected the rock.

Swapping sides, another near goal could have changed the outcome.

From a throw-in, junior Chloe Zuraff found room to operate in the middle — turning her shoulders and hitting a shot along the ground that missed to the left.

The Lady Spartans kept possession on the end of their choice for the next-few minutes, coming close to adding another go-ahead score.

Multiple deflections occurred in the box as Elko did not clear the ball, Spring Creek regaining opportunities — unable to knock anything home.

As the Lady Indians flipped the field down the right side Lamb recovered and made a nice defensive play along the sideline.

Elko freshman Avery Beatty lifted a shot high and wide to the right.

Elko was awarded a direct kick, Beatty taking the boot — sending an on-point pass — the Lady Indians a step slow of heading the ball into the frame.

Orr made another save on the other end for Elko, coming off a clean look for Spring Creek.

Primeaux fired a long attempt on the other side, the ball missing high and wide to the right.

After a change of possession, Spring Creek created a push down the left side of the field by Lopategui — who crossed a picture-perfect pass into the box.

Spring Creek was slow to the ball, which sailed to the weak side without harm.

Elko was then called for a handball between the 18-yard box and midfield, Lopategui drilling a line drive from the center toward the middle of the posts.

Orr never had to move much, collecting the shot firmly.

The Lady Indians nearly left Spring Creek with a 1-0 win, Beatty finding a late look and striking a good-looking shot.

Primeaux launched the last true attempt of the contest, the ball saved by Fellows.

After 80 minutes, the Lady Indians and Lady Spartans were each forced to settle for a point — coming on a 0-0 tie.

The Lady Spartans (4-2-3 in league) will play at 4 p.m. Friday, in South Tahoe, wrapping up the road trip with a noon Saturday date at Incline.

Elko — in reverse order — will open their roadie with a 4 p.m. Friday match versus the Lady Highlanders, finishing with a noon Saturday game against the Lady Vikings.

The Spring Creek girls soccer team played some good ball over the weekend but does not have any points to show for it. On Friday, Spring Creek battled defending regional champion South Tahoe to a 2-1 ballgame — also coming up short in a 1-0 match on Saturday, at Incline.

The Lady Indians entered their road trip after a scoreless tie on Sept. 27, in Spring Creek, Elko opening Friday with a 1-0 loss at Incline and scoring a goal but giving up two Saturday in a 2-1 defeat at defending regional champion South Tahoe.

Lady Indians draw even with Truckee

On Saturday, the Elko girls soccer team found itself locked in a 0-0 tie. Fortunately, the one point the Lady Indians earned was a point that has been hard to come by for opposing clubs, doing so against defending state champion Truckee.

Following the Spring Creek girls soccer team's first win in program history over Truckee by a final score of 2-1 on Friday, the Lady Spartans weren't able to reproduce the magic Saturday in a 3-1 loss to North Tahoe. Senior night for the Lady Spartans will be celebrated when they face Sparks at 4 p.m. Friday, Spring Creek playing its home finale at noon Saturday versus North Valleys.

Elko girls soccer team moves to fourth in the 3A North with a pair of home wins, following Friday's 3-0 victory over North Valleys with a 2-0, late-surge shutout W against Sparks.

After opening its weekend with a 3-0 shutout victory Friday over Sparks, the Spring Creek girls soccer team allowed two second-half goals to North Valleys during a 2-2 tie during a windy, rain-filled match Saturday.

What a difference a game cane make. With some help from a loss and a tie by Incline, the Spring Creek girls soccer team jumped to third in the 3A North standings with a 1- victory Tuesday against Lowry.

The Spring Creek girls soccer team maintained its third-place position in the league standings with a 1-0 victory Thursday on the road in Fallon.

Never mind that Spring Creek senior Kattalin Lopategui stands at 5-foot-1-inch, that she is slight and slender in build or that most people do not know how to correctly pronounce her Basque name. She has big-time game and is now a 1st-Team All-State midfield selection.

Primeaux has elected to play soccer and signed her national letter of intent with Stephens College, an NAIA program, in Columbia, Missouri.

Spring Creek's Libby Murphy, left, sets for a kick Friday against Elko's Kaitlyn Walton, in Spring Creek. The teams entered the match tied in the league standings and played an even contest, battling to a 0-0 draw.

Elko's Dariahn Primeaux (28) makes a pass to the wing in front of Spring Creek's Shyann Lamb (30) on Sept. 27, 2019, in Spring Creek. The game centered around the middle of the field, and neither team was able to break through for a game-changing goal in a 0-0 tie.