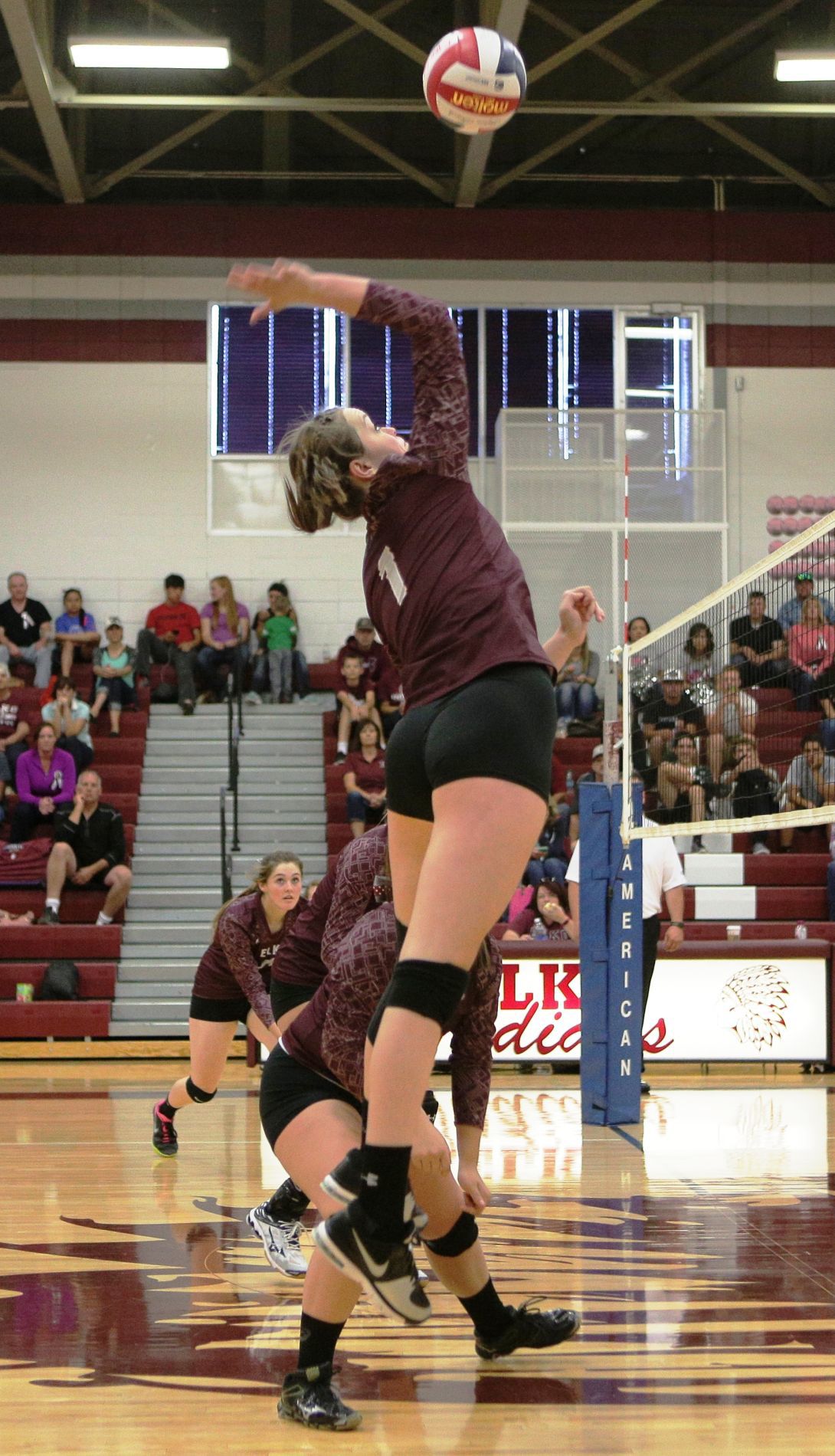 As a senior, Elko High School's Alley Ford drives a kill during the 2015 season against Truckee, at Centennial Gymnasium. She earned 2nd-Team All-League honors for the I-A North as an outside hitter, leading the Lady Indians with a 96.5-percent successful-serve rate. The 2016 EHS graduate is now Spring Creek's head volleyball coach. The Lady Spartans will open the year on Aug. 23 during the Yerington Tournament. 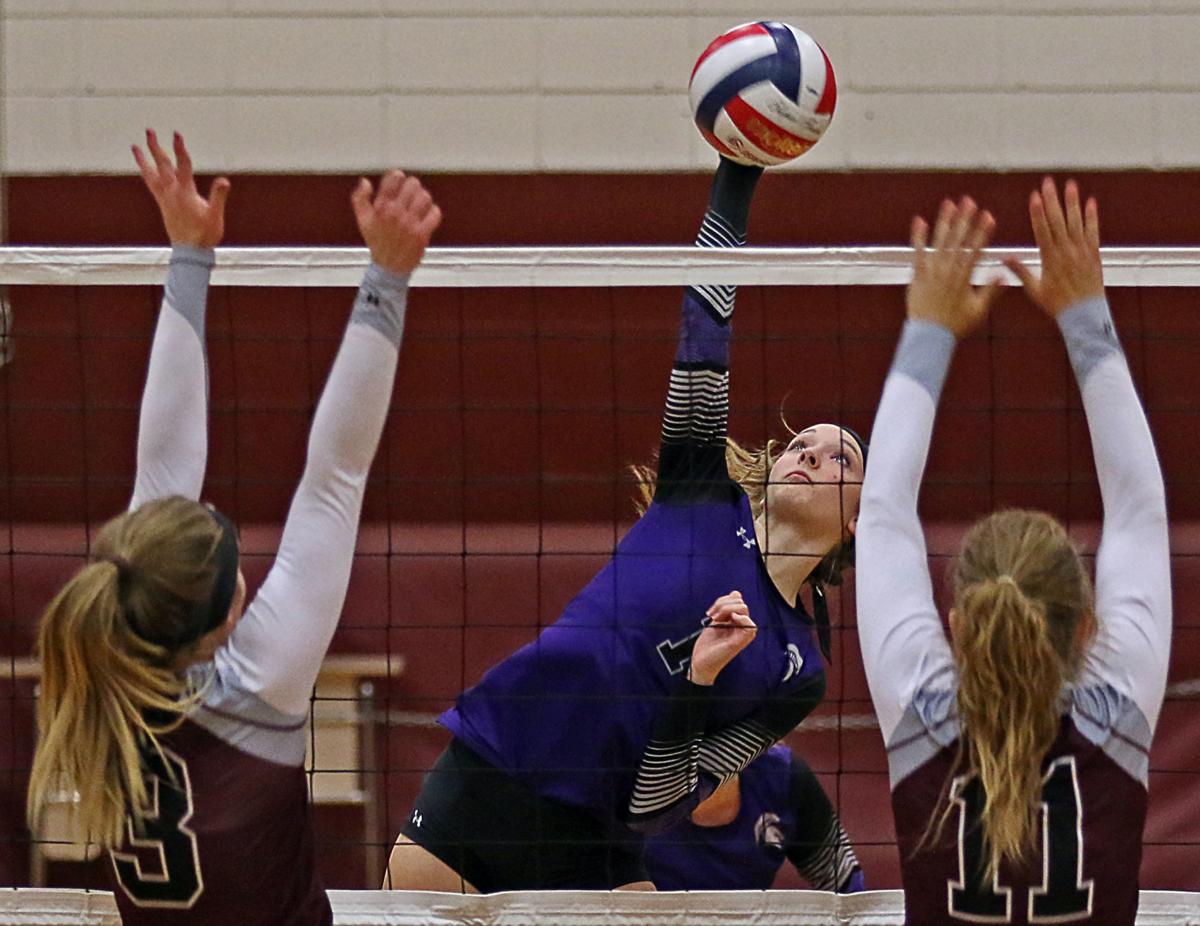 SPRING CREEK — When the Spring Creek volleyball team hits the court in 2019, the girls will be led by an Elko High School graduate.

The Lady Spartans — coming off their first postseason appearance since 2012 — will return a large number of players from the 2018 roster but will have a new coach at the end of the bench.

EHS Class of 2016 graduate Alley Ford is a mere week and a half away from plunging into coaching at the varsity level, the Lady Spartans set to open the year in the Yerington Tournament on Aug. 23 against the hosts.

“When you’re a player, you feel like you have the support of your teammates and coaches,” Ford said. “But the Spring Creek community has been great and made me feel very welcome.”

As for the squad she inherited, Ford will take control of an experienced roster and the most successful volleyball program in Spring Creek’s recent history.

The Lady Spartans bring back eight players from the 2018 team — graduating just four girls in June — another athlete not on the roster this season.

Now a senior, Nicole Southern will once again be the Lady Spartans’ libero.

Southern was an honorable mention for the league awards last season.

She topped the Lady Spartans with a 97.2 service percentage, committing just four errors in 145 attempts.

Southern tied for third on the team with 19 aces.

She closed second on the roster in how she received opponents’ serves with a 1.48 serve-receive rating.

In the backline of Spring Creek’s defense, she made 94 digs and ranked third on the roster.

A defense also needs to be complemented with an offense for a team to have sustained success.

Without question, the Lady Spartans’ most proven weapon returning to the floor is now-junior Kylee Dimick.

While her long, athletic frame allows her to roam to different positions — moving around may have also inhibited her from excelling in one area.

Playing a lot in the middle last year — a spot not typically designed for offensive dominance — Dimick still managed to lead Spring Creek in kills by a wide margin.

She thumped 87 putaways — 31 more than anyone on the team — also notching the best kill and hitting percentages on the roster.

Transitioning to behind the service line, her 22 aces topped the team.

When at the middle of the floor and against the net, many of the shots by Spring Creek’s opponents were stuffed cold.

Dimick finished the season with 28 blocks, 16 more than her next-closest teammate.

“We’ll probably play Kylee at outside hitter, but she’s an all-around player,” Ford said. “She has a great block too, so it’s hard to move her away from the middle.”

Ford expects junior Hailey Cruson to be an impact player after seeing considerable time on the floor as a sophomore.

“Hailey will likely be on the strong side but can move all the way around,” she said.

Last season, Cruson ranked fourth on the roster with 35 kills and added 32 digs.

To provide hittable balls, Spring Creek will look to junior Chelsea Ackerman at its main setter.

She finished the 2018 season with 91 assists, second only to fellow junior Ryley Ricks — who closed her sophomore year with a team-best 111 digs.

“Ryley will bet setting for us as well,” Ford said.

With Dimick likely spending more time at outside hitter than her first-two years on varsity, Ford said she will play senior Cheyenne Cleveland a lot in the middle.

Adding to Spring Creek’s defense, senior Amie Donham will aid Southern along the back row.

In fact, Donham finished her junior year 110 digs — the second-best total on the team.

Alayna Grosz graduated after a 2nd-Team All-League selection at middle-side.

Grosz sparked Spring Creek’s first appearance in the regional tournament after a five-year drought, leading the Lady Spartans in several areas, including digs.

She dug up a team-high 119 shots, which topped even the libero position.

Her 1.71 serve-receive rating was also the best for the Lady Spartans, and she closed the season with 19 aces and 12 blocks.

She ranked second on the roster with a 95.5 service percentage.

Spring Creek also sent off Matty Kennedy, who was third on the team with 23 assists and nine blocks and ranked fifth on the roster with 34 kills and 11 aces, adding 50 digs.

Ford said in the early process of her coaching tenure, she thinks Spring Creek’s strength will come from its defense.

“Our back row will be really good this year,” she said.

A weakness of inexperience at one position could, in fact, become a strength for the Lady Spartans.

As with any new career — athletically related or not — expect a learning curve, ups, downs, bumps and bruises.

Ford said one of the biggest challenges she will face does not directly relate to the sport.

“Volleyball is as much of a mental game as it is a physical one,” she said. “Sometimes, the hardest thing to do is to get the girls out of their own heads.”

As Spring Creek looks for a return to the postseason, the Lady Spartans will need the ability to put bad plays and lost points behind them and quickly refocus on the task at hand — the next point.

The Lady Spartans will open the year at 9 a.m. Aug. 23 against tournament host Yerington, following with a noon contest versus Virgin Valley and a 3 p.m. start against Coleville (California).

Spring Creek will move into bracket play on Aug. 24.

The Lady Spartans’ Division 3A North opener will take place on the road but in front of plenty of faithful fans, facing Elko at 6 p.m. Aug. 28, at Centennial Gymnasium.

Their first home game of the season will be against South Tahoe at 6 p.m. Sept. 6, in Spring Creek.

ELKO — For the third time this season, the Elko and Spring Creek volleyball teams will square off — Friday’s meeting marking a win-and-advance…

SPRING CREEK – After winning two of its first three league matches, the Spring Creek volleyball team has since gone on a three-game losing streak.

Keen named coach of the year, Wright on 1st-team

Spring Creek's and North Valleys' volleyball teams each hunt for first win in league play at 6 p.m. Friday, the match giving one the W and the other another loss and an 0-for record.

Spring Creek girls volleyball teams picks up first win in league play, follows with competitive performance — despite being swept — against Truckee. The Lady Spartans (1-4 in league) will play a big rematch of a two-out-of-three win from the preseason tournament in Yerington against Fernley (4-1 in league) at 6 p.m. Friday, in Spring Creek.

Spring Creek volleyball team was swept Friday by Fernley in its rematch of a best-of-three win during the preseason meeting, but the Lady Spartans wrapped up the weekend with a straight-set victory Saturday versus Sparks. The Lady Spartans will close out the first half of the 3A North season at 6 p.m. Friday in Fallon and noon Saturday at Lowry.

On the road, the Spring Creek volleyball team was a few points away from its first clean weekend of the 3A North season. The Lady Spartans lost a five-set battle on Friday in Fallon but bounced back for a hard-fought, four-set win at Lowry.

The Spring Creek volleyball team suffered the same result in the second meetings as it did in the first matchups with South Tahoe and Dayton, swept in three frames by the Lady Vikings and coming out on the low side of a five-set battle with the Lady Dust Devils.

Lady Spartans get swept, bounce back

The Spring Creek volleyball team split its weekend road matches, being swept by No. 1 Truckee but bouncing back with a three-set sweep of its own versus North Valleys. As the finish line of the regular season approaches, the Lady Spartans will need to start winning each of its weekend games to ensure a postseason berth.

The Spring Creek volleyball team’s season will likely come down to its last-two matches.

The Lady Spartans (5-11 in league) will need wins to punch their tickets to the Division 3A North regional tournament, hosting Lowry (4-11 in league) at 6 p.m. Thursday and facing a do-or-die contest versus Fallon (5-9 in league) at noon Friday, in Spring Creek.

The Spring Creek volleyball needed a pair of home wins to wrap up the season and keep their regional tournament hopes alive, accomplishing the front half of the objective with a four-set win but falling four frames in the finale.

As a senior, Elko High School's Alley Ford drives a kill during the 2015 season against Truckee, at Centennial Gymnasium. She earned 2nd-Team All-League honors for the I-A North as an outside hitter, leading the Lady Indians with a 96.5-percent successful-serve rate. The 2016 EHS graduate is now Spring Creek's head volleyball coach. The Lady Spartans will open the year on Aug. 23 during the Yerington Tournament.