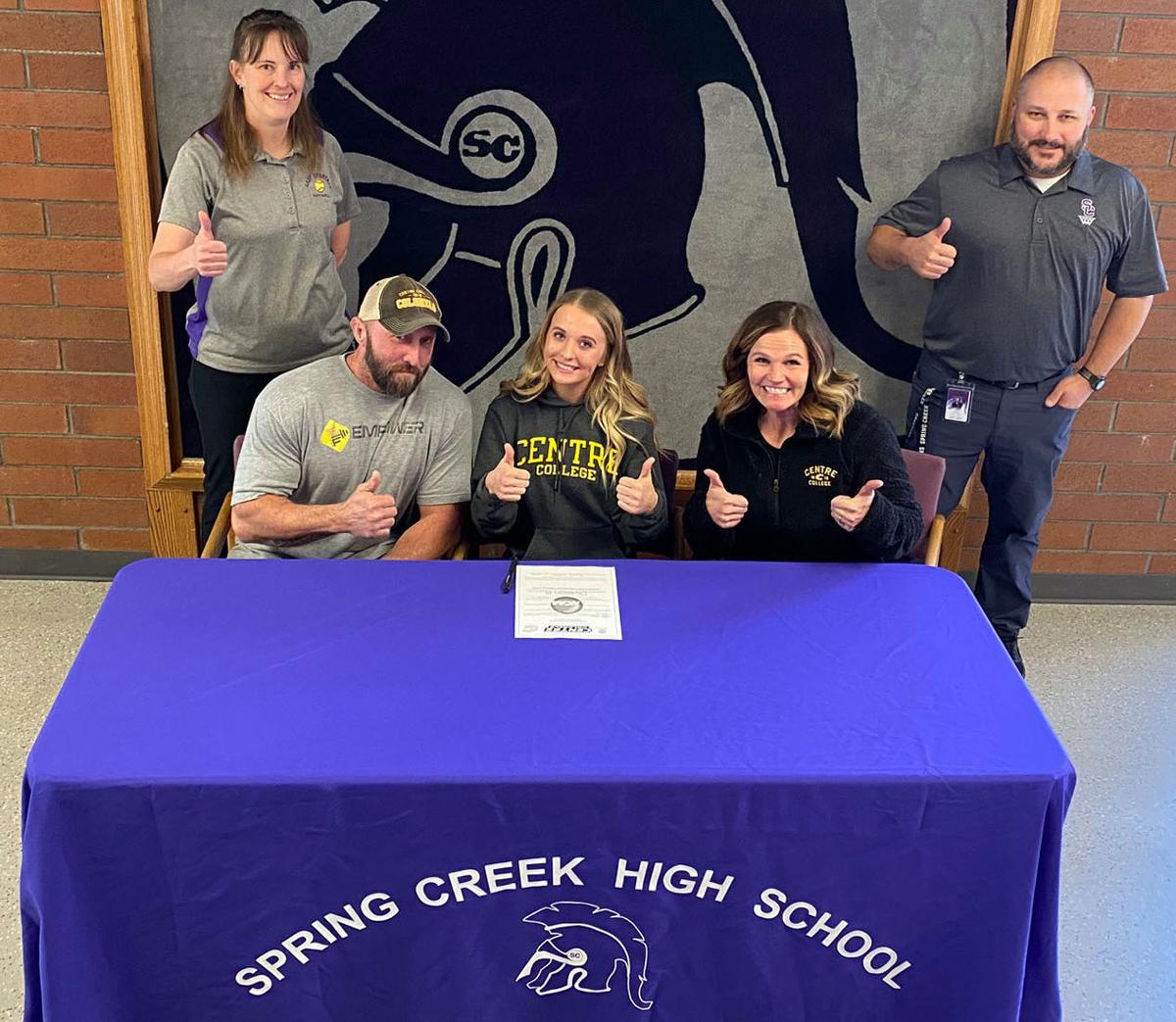 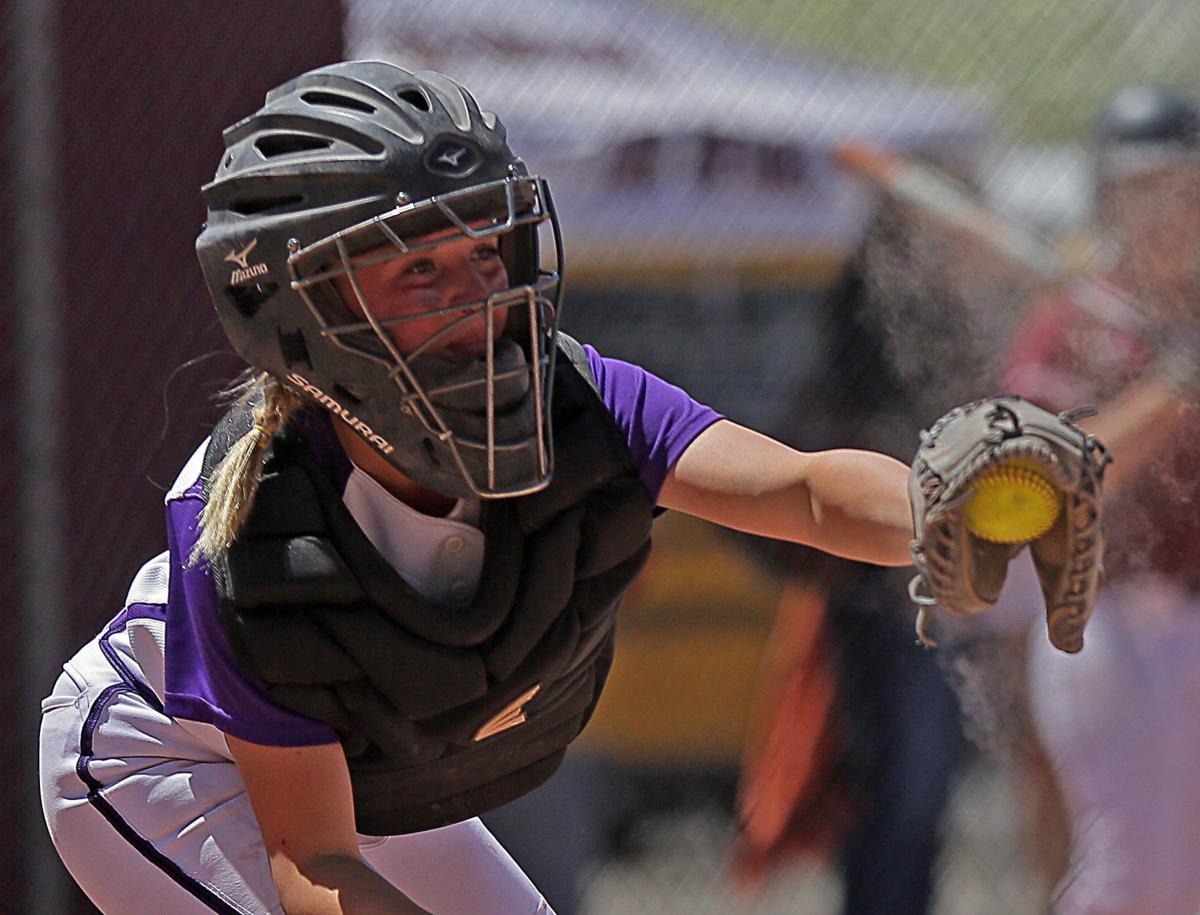 Spring Creek catcher Hailey Watson extends for an outside pitch against Dayton, on May 10, 2019, at Newton Field. Watson has signed her letter of intent to catch for Centre College, a Division III program, in Danville, Kentucky.

SPRING CREEK — She doesn’t play center field, but she’s in the middle of the action and committed to Centre College.

Centre — a Division III program in the Southern Athletic Association — wants Watson to catch, a position she has progressively more for the Lady Spartans.

Watson is a four-year varsity player for Spring Creek, where she began her career at second base and moved to shortstop — doubling as a catcher in recent seasons.

Under Centre head coach Tori Brown — who was hired in the summer of 2017 — the Lady Colonels finished 18-18 overall and posted a winning 10-8 mark in the SAA during the 2018 season.

With the Lady Spartans, Watson has competed in the postseason twice — missing out on the 3A North regional tournament during her freshman year with a 6-18 league record — Spring Creek earning the sixth and final berth to regionals in both 2018 (8-16 in league) and 2019 (8-11 in league).

As a sophomore, Watson earned significant time as a starter and played in 30 games — hitting .218 with a .286 on-base percentage, scoring 19 runs, driving in 12 runs and stealing three bases.

On March 8, 2018, during an 8-7 win over Pahranagat Valley, she tallied her first multiple-hit game of her career — going 2-for-3 with two RBIs and a run scored.

She scored three runs on two occasions, doing so in the first game of the doubleheader against Sparks in a 13-12 loss and during a 16-6 road win over Truckee on April 21, 2018 — batting 1-for-3 with a double and two RBIs.

During her junior season, Watson’s batting average remained at .214 but her on-base percentage jumped to an even .400.

She scored a career-best 22 runs and drove in seven runs, notching three doubles and a triple.

Her best series came against Truckee.

On the next day, Watson capped the series with a perfect 2-for-2 day at the plate with a triple and two RBIs, scoring a season-best four runs and stealing three bases.

She matched her season high for runs scored in a 30-16 victory in the series finale with the Lady Vikings, swiping a season-best four bags in the contest.

Watson stole 11 bases on the year.

As the Lady Spartans begin their season March 5 during the Virgin Valley Tournament, in Mesquite, Watson can do so with a relaxed mind now that her collegiate decision is already made — helping Spring Creek both behind the plate, in the infield and with her bat.

Congratulations to Hailey Watson on signing her letter of intent to play softball for Centre College, best wishes in her senior season with Spring Creek and good luck at the next level.

ELKO – After falling 12-1 Thursday in the opening round of the Division 3A North baseball tournament, the Spring Creek softball team was bounc…

ELKO – The ballgame between the No. 3 Fallon and No. 6 Spring Creek softball teams came down to two innings, the first and the last.

ELKO – As is the case with the baseball teams, both of Elko’s and Spring Creek softball teams will be represented in the Division 3A North reg…

Win, win – Lady Spartans are in

RENO – Well, it came down to the wire – but the finish was sweet for the Lady Spartans.

SPRING CREEK – The objectives are simple, the missions clear.

SPRING CREEK – The Lady Spartans turned some heads early Friday in the first game of the series against the defending state champs.

DAYTON – The Spring Creek softball team’s season has been one of streaks.

SPRING CREEK – There hasn’t been a better time for the Spring Creek softball team to string together some wins.

Stutesman hits for cycle in 2nd game of series

SPRING CREEK – Through five games in league play of the Division 3A North, the Spring Creek softball team is looking for its first win.

Lady Spartans doubled up by Fernley, 14-7

FERNLEY – Despite the lopsided score of 14-7, the Spring Creek softball team had some positive signs in Friday’s loss in Fernley – Saturday’s …

ELKO – Spring Creek’s second league softball game of the season went much better than its first.

ELKO – Unable to play on its home field, the Spring Creek softball team did not find Newton Field, in Elko, any more hospitable Friday.

SPRING CREEK – As the Spring Creek softball team prepares to hit the diamond for the 2019 season, the Lady Spartans will be under the instruct…

FALLON – Spring Creek’s start to its regional softball game Friday against Dayton could not have been better.

It’s do or die time for the Lady Spartans softball team after Spring Creek dropped a 15-1 game at Fallon on Thursday.

SPRING CREEK – Tuesday’s doubleheader between the Elko and Spring Creek softball teams was a tale of two very different contests.

SPRING CREEK – Despite battling the defending state champions hard throughout Friday’s contest, the Spring Creek softball team could not lay a…

SPRING CREEK – The first meeting of the season provided a one-sided outcome.

Don’t count eggs before they hatch, but the Spring Creek softball team appears poised for a postseason push.

Spring Creek catcher Hailey Watson extends for an outside pitch against Dayton, on May 10, 2019, at Newton Field. Watson has signed her letter of intent to catch for Centre College, a Division III program, in Danville, Kentucky.