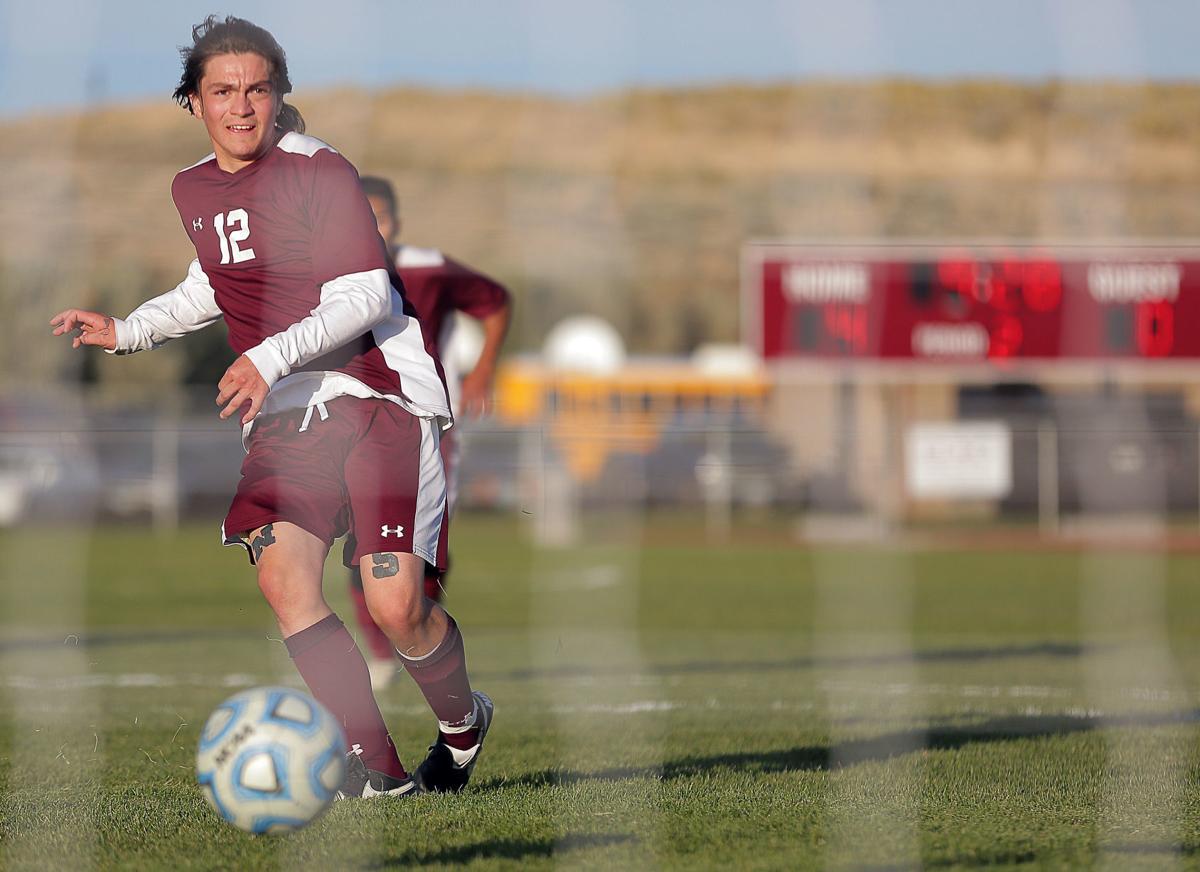 Eko's Noe Guzman opens a 5-0 lead in the second half Friday with a penalty kick against Incline, at Adobe Middle School. The Indians rolled to a 7-0 victory for their third-consecutive win. 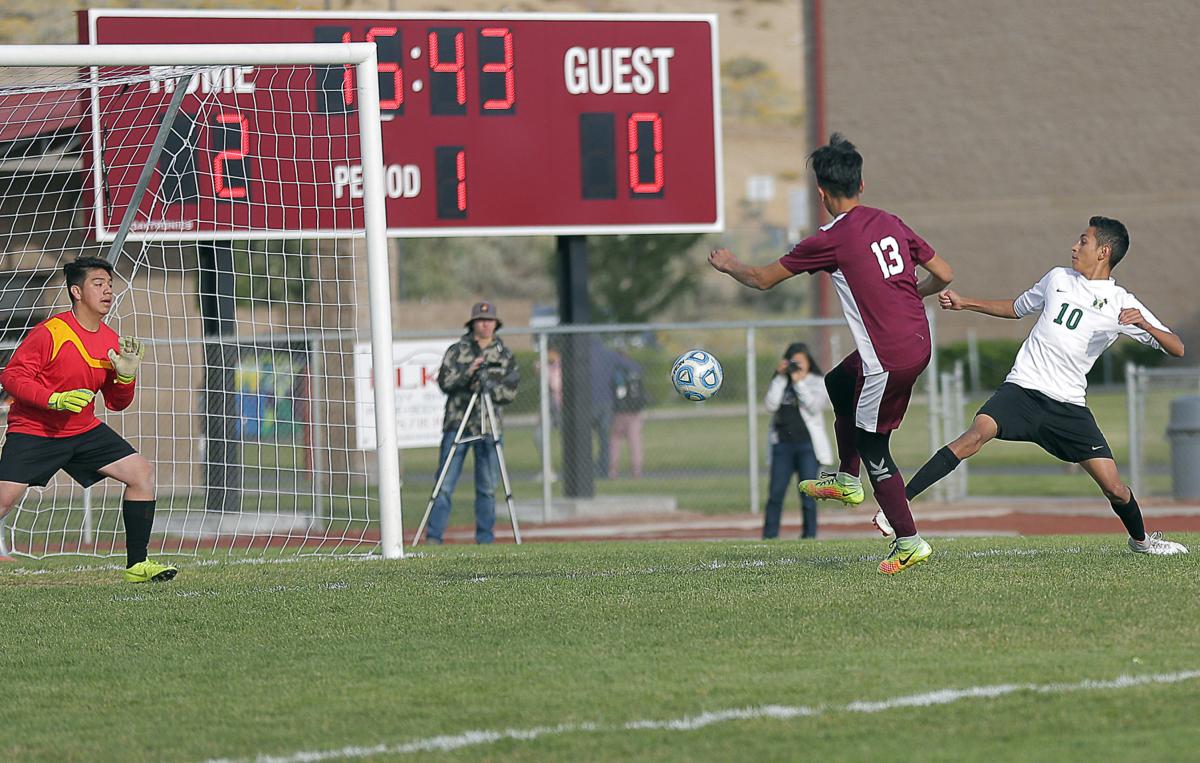 ELKO — In Friday’s soccer match, the Elko Indians put up a touchdown and an extra point.

Against Incline, Elko scored four goals before the break and three more in the second half — rolling to a 7-0 victory over Incline.

Incline found an early shot off the foot of junior Mario Ponce, but Elko found an opportunity down the middle on a through ball and a run by senior Natu Meles — junior goalie Alex Romero sliding forward for the deflection.

Meles crossed a pass to senior Raul Cortes, who headed the ball wide to the right of the frame.

Elko moved the ball effectively, junior Jose Ventura passing to senior Gustavo Cortez on the wing — working the ball back to the middle — senior Sammy Aguirre’s stamp flying high over the crossbar from point-blank range.

In the 12th minute, the Indians were awarded a penalty kick for a foul in the box — Meles striking the lead-changing goal to the lower-left side of the net.

On the other end, Incline freshman Zekarias Kershaw fired a ball over the frame.

Meles took a line-drive from long distance, the ball trickling wide to the left.

Raul Cortes – with an “s” — pushed the ball down the left wing, Gustavo Cortez — with a “z” — trailing the play.

When the ball dropped back, Cortez pounded an offering — sticking the ripped screamer into the far-right side of the frame for a 2-0 lead in the 23 minute.

About 30 seconds later, Cortes grabbed a rebound in the middle and struck his second-chance kick in for a 3-0 advantage.

Ventura nearly booked a score in the 26th minute, and Cortez hammered another kick that was stopped by the goalie.

Sophomore Freddy Cervantes launched a direct kick from near midfield that flew high, and senior Lizandro Rodriguez tagged another shot that was stuffed.

Incline found an open look but also sailed its attempt over the crossbar from the right wing.

Junior Alejandro Rodriguez found another opportunity from the right side, his ball also flying high and wide to the right for Incline.

In the 39th minute, Ventura was tripped in the box on the right side — Meles taking and baking his second PK of the half.

Elko used the lead to give playing time to a bunch of its bench players in the second half, Incline experiencing more success and chances.

Sophomore goalkeeper Eric Azcue made a save on a drilled shot in the middle, and another Highlander attempt smacked off the right post.

Senior Julian Gonzales took a long shot for Elko that was nailed but hit directly to the keeper.

He then hit a free kick to the middle from the wing, Meles heading the ball high.

Meles took a direct kick from the middle of the pitch, smoking a line drive down the middle but the goalie leaping for a deflection.

The Indians crossed the ball to the middle to senior Noe Guzman, the keeper coming forward for the stop just as the run arrived.

Senior Adrian Rodriguez also thumped a ball down the gut, Incline’s goalie going up top for a stop.

The Indians nearly grabbed a 5-0 lead as Cortez connected with Gonzales from the right side to the middle — his kick also saved at the last moment.

In the 71st minute, Ventura was knocked down just inside the 18-yard box — Guzman taking the PK and ripping a low ball to the lower-right side of the frame for a 5-0 lead.

In the 75th minute, Ventura looked to the opposite side of the field — Cortez taking one touch and drilling a quick goal — his second of the contest.

He turned and nailed his third goal of the game — following his four-goal haul last week against Spring Creek with a hat trick — giving hi seven goals in the last-two matches.

He nearly added a fourth goal Friday from the right side, chipping a shot over the frame in the 78th minute.

At the final whistle, the Indians cruised to a 7-0 victory.

Elko (4-3-3 in league play) will take on South Tahoe at noon Saturday, at Adobe Middle School.

The Vikings were 7-2 in the 3A North prior to Friday’s game in Spring Creek.

The Elko boys soccer team finished the first half of the 3A North season on a two-game winning streak with a 5-0 shutout of Spring Creek on the heels of a four-goal haul by Netu Meles, the Indians currently in sixth place of the league standings and the Spartans in a tie for seventh and eighth.

The Elko boys soccer team may have saved its season Tuesday. Entering their road match against Lowry with just one win in league play, the Indians took down the No. 3 Buckaroos by a final score of 2-1. To close the first half of the 3A North season, the Indians will host Spring Creek in a vital game for each squad at 5 p.m. Friday, at Adobe Middle School.

ELKO — The 2019 meeting between the Elko and North Valleys boys soccer teams was a different kind of match than the 2018 games.

Youngsters step up for depleted Elko

SOUTH TAHOE, California — Due to some injuries to key players, it’s hard to say a win and a one-goal loss was not a decent weekend for the Elk…

ELKO — After two games of league play, the Elko boys soccer team is still look for its first Division 3A North victory.

SOUTH TAHOE, California — Despite a close affair, the Elko boys soccer team and second-year coach Alonso Lujan got the ball rolling the right …

Shorthanded, the Elko boys soccer team kept its postseason hopes alive Saturday with a key tie following a blowout loss. The Indians will face another set of road tests as they search for a return to the playoffs.

ELKO — With a 3-0 victory Friday over Fallon, the Elko boys soccer team is still alive for a postseason berth — barely.

Indians flurry in 4-2 victory over Buckaroos

With one game remaining in the regular season, the Elko boys soccer team has given itself a chance to play in the postseason. The Indians opened a 3-0 lead in the first half and beat the team ahead of them in the 3A North standings, ripping off a 4-2 victory Tuesday over Lowry.

The Elko and Spring Creek boys soccer teams will not play in the regional tournament but — despite no playoff appearances — the regular season ended with some fireworks, a far cry from a 5-0 victory for the Indians in the first meeting of the year.

Meles set to strike with Coyotes

Eko's Noe Guzman opens a 5-0 lead in the second half Friday with a penalty kick against Incline, at Adobe Middle School. The Indians rolled to a 7-0 victory for their third-consecutive win.