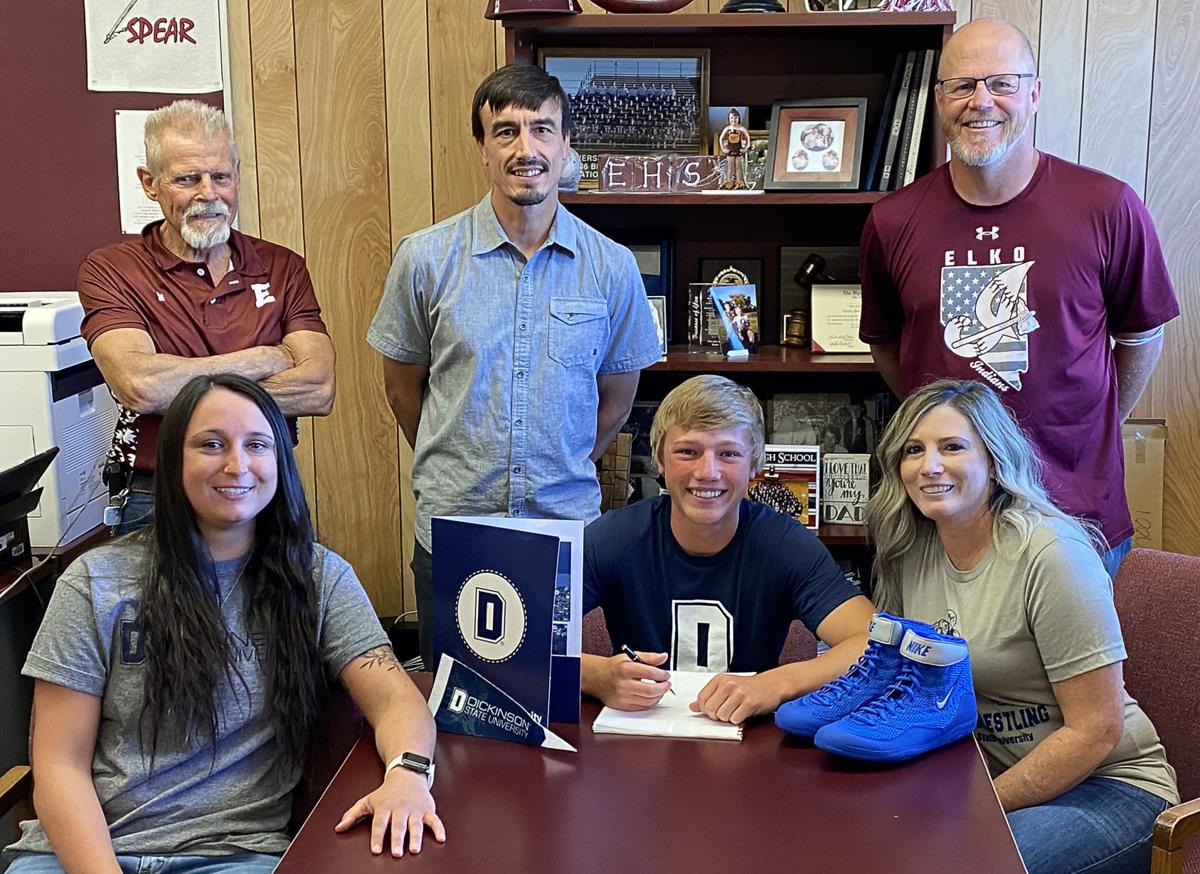 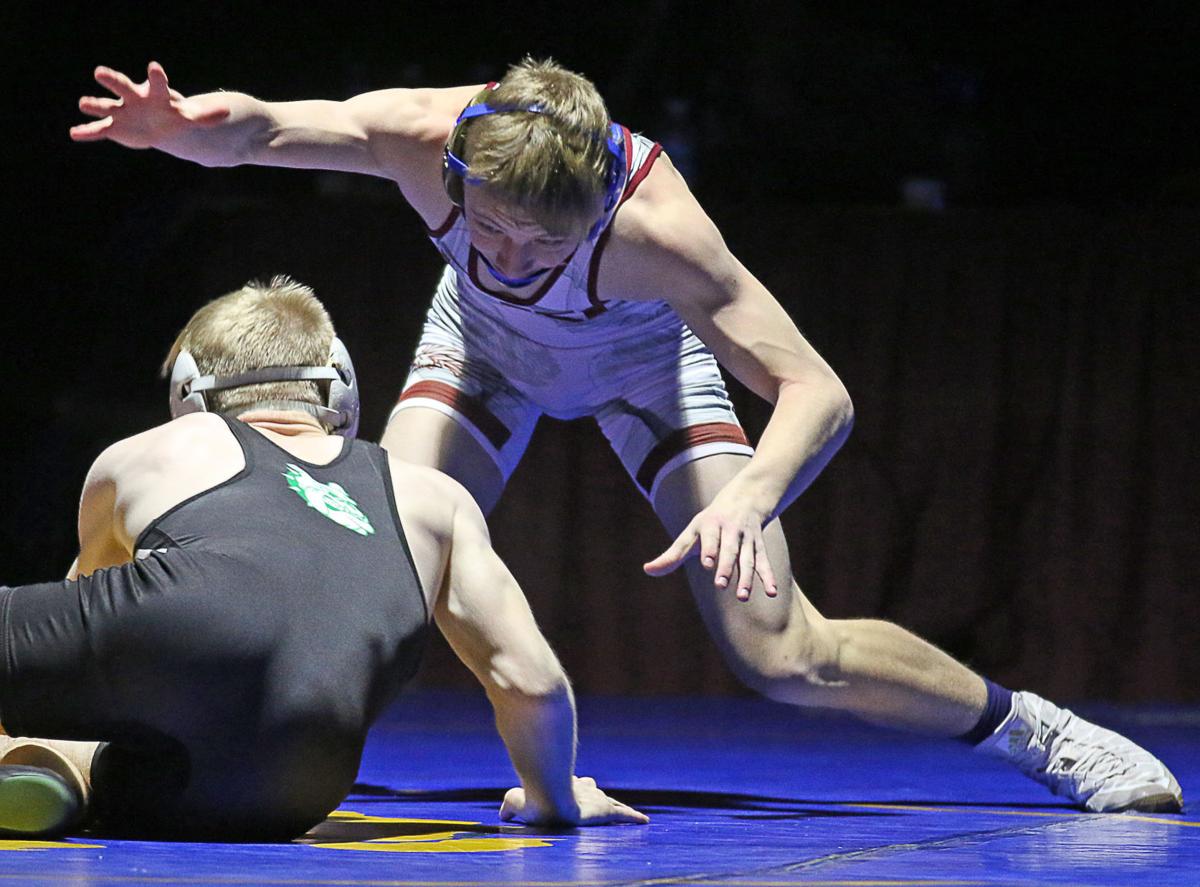 Elko's Zeth Kinterknecht, far, reverses for a point against Virgin Valley's Rudy Cannon during the 113-pound Division 3A state championship on Feb. 9, 2019, at Winnemucca Events Center. Cannon won the match by an 8-3 decision, Kinterknecht finishing as the state runner-up.

ELKO — Despite being stripped of a senior season, Elko wrestler Zeth Kinterknecht still managed to earn a collegiate offer.

Kinterknecht accomplished enough wins, pins and high-placing finished at both the regional and state levels through his junior year to turn some heads and will look to garner more looks and victories in the Midwest.

He has signed his national letter of intent to wrestle for Dickinson State University, in North Dakota.

An NAIA program, the Blue Hawks compete in the North Star Athletic Association.

He made a winter visit — traveling by himself to Dickinson, in December — and loved the trip, despite the fact that he originally wanted to “go somewhere warm.”

“I liked the coach, and the weight room was really nice,” he said. “I’m going to be in there all the time.”

Academically, he wants to going into the medical field and study nursing.

“I want to be an anesthesiologist,” he said. “That’s what I see myself as in 10 years.”

On the mat, Kinterknecht expects to wrestle at the collegiate level at 125 pounds — which is a jump from the 113-pound and 120-pound divisions he competed in at the high school tournaments.

Short-term, Kinterknecht said he obviously wants to wins and would “like to be a role model.”

For the long haul, he hopes that he “will be an All-American and be a national champion.”

“Zethery’s biggest strengths may also be his biggest weaknesses,” Overlie said. “He knows what he wants to do and how he wants to attack. His big focus is on his feet, but he has improved a lot with his hands and his in-fighting.”

Overlie said Kinterknecht will “walk in with some intensity.”

“These guys lost their season, but the NAIA kids only got about half of a season so a lot of those kids got a free year of eligibility and I think a lot of them will go back for another year,” Overlie said. “Which is good, because those older wrestlers can kind of adopt the newcomers into the program and provide leadership in those player/coach deals.”

“I’m happy for him. Zeth has been doing this for a long time, since he was about 5,” said Derril Fry.

While at Dickinson State, Kinterknecht will live in on-campus housing — calling the rooms “really nice.”

As a freshman, Kinterknecht finished fourth at the 3A North regional tournament with a 3-2 record — all three wins coming by fall — in the 113-pound weight class.

In his sophomore season, he won the 3A North regional championship at 113 pounds — going 2-0 with a pair of pins.

At state, he finished second and went 2-1 with a pin — losing in the championship match.

Kinterknecht moved up a division to 120 pounds as a junior, claiming his second 3A North regional title — going 4-0 with three pins.

He took second at state for the second year in a row, closing 2-1 with a win by major decision and another by pinfall before losing in the state final.

His senior season may have been denied due to COVID-19, but Kinterknecht’s wrestling days are far from over — setting foot on the mats at Dickinson State University.

Look to the Chargers and Seahawks to make the playoffs

Spring Creek senior Lydia Binger will serve as a two-sport athlete at the collegiate level.

In total, Elko County and the surrounding areas of Battle Mountain and Eureka knocked down 23 qualifications to the National Junior High Finals Rodeo — taking place from June 20-26, in Des Moines, Iowa — and brought back nine state championships.

Following an amazing career with the Spartans, Boyd has made a verbal commitment to continue his wrestling at the next level at North Idaho College, in Coeur d'Alene.

In total, Elko County and Battle Mountain earned 21 qualifications to the National High School Finals Rodeo — which will take place from July 18-24, at the Lancaster Event Center, in Lincoln, Nebraska.

After an unlikely football season was approved and safely executed, a number of players were recognized with All-League selections of the Division 3A North-East.

FALLON — When searching for the winners of the Division 3A North regional track and field meet, look no farther than Spring Creek.

Elko's Zeth Kinterknecht, far, reverses for a point against Virgin Valley's Rudy Cannon during the 113-pound Division 3A state championship on Feb. 9, 2019, at Winnemucca Events Center. Cannon won the match by an 8-3 decision, Kinterknecht finishing as the state runner-up.