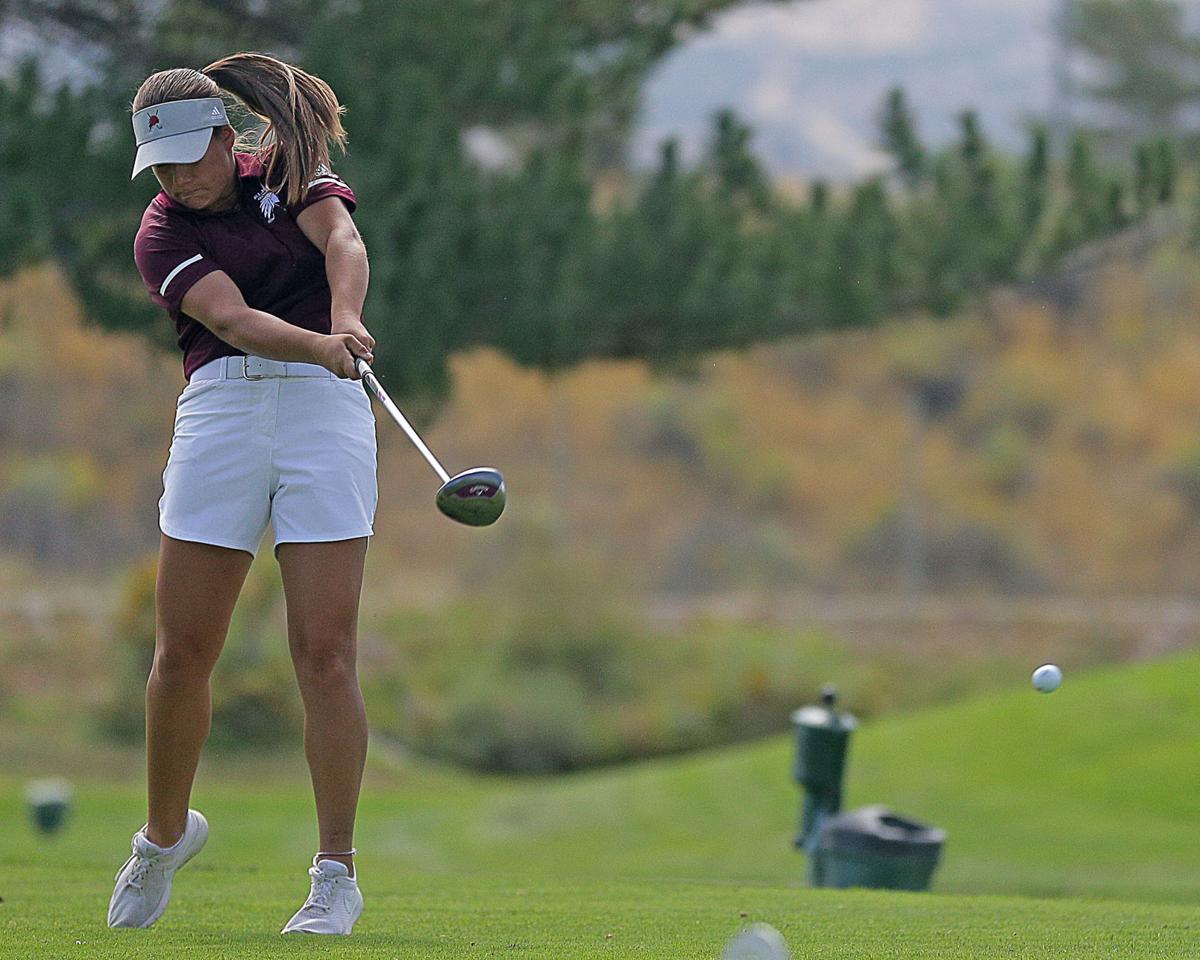 Elko's Caresse Basaraba stings her drive on Sept. 4, 2019, from the tee box of the par-4 seventh hole at Ruby View Golf Course. Basaraba shaved 11 strokes from her fifth-place round of 99, at Spring Creek Golf Course, and placed third overall with a round of 88 on matching scores of 44 on the front and back-nine holes. The Lady Indians won their home tournament with a team total of 371. 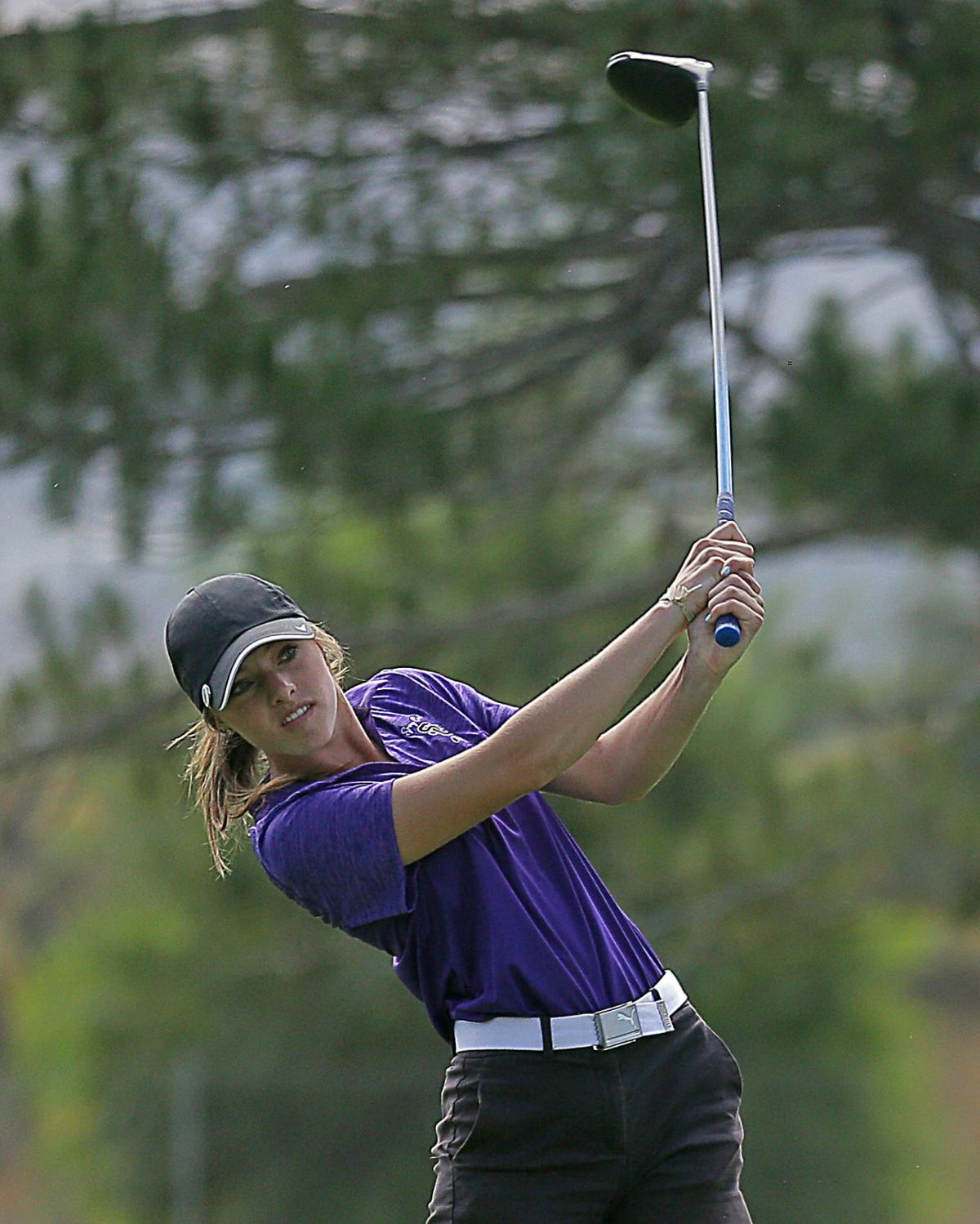 Spring Creek's Emalee Ingram follows through on her drive on Sept. 4 on the par-4 seventh hole, at Ruby View Golf Course. She led the Lady Spartans and placed fourth overall with a round of 92.

ELKO — Two tournaments into the Division 3A North season, the Elko girls golf team has knocked down a pair of wins and raised the bar.

After winning Tuesday’s league opener in Spring Creek, the Lady Indians shot low Wednesday and shaved 35 strokes from their team score — using the friendly confines of their practice surface at Ruby View Golf Course — topping the field for the second time in two days.

Elko won its home tournament with a collective score of 371 — already besting its 2018 season low (373 on two occasions) — opening a 53-stroke lead over second place.

“We shot a 375 on our course last year, so the score we had today was pretty comparable. I think the girls used their familiarity with our course to their advantage, and their hard work is paying off,” said Elko coach Jeff Sarbacker. “We putted better today, but there are still things we’re going to work on.”

Spring Creek took second on consecutive days — the Lady Spartans nearly shooting an identical round as they did on Tuesday at Spring Creek Golf Course — falling one stroke from a 423 to a 424.

The Lady Wolverines of Truckee finished third as a team with a score of 440, but the individual title once again went to Ryan Flynn — who blistered another 76 after winning Spring Creek’s tourney with the same score.

South Tahoe ranked fourth with a 463, flipping spots with Fallon — who fell to fifth with a 467 — Fernley rounding out the qualifying teams in sixth with a 514.

For the Lady Indians, junior Gabby Bement continued her hot start to the year — taking second for the second-straight day — once again setting a personal-record round with an 83, shooting consistently with a 42 on the front-nine holes and closing with a 41 on the back.

Senior teammate Caresse Basaraba improved greatly from Tuesday to Wednesday, shaving 11 strokes and placing third in Elko with a dead-even 88, posting matching 44s on the front and on the back.

“It was a good bounce-back round for Caresse after yesterday,” said Sarbacker.

Spring Creek senior Emalee Ingram also brought an improved performance to Ruby View, finishing fourth overall with a round of 92, cutting eight strokes from her Tuesday total of 100.

Elko placed three girls in the top-five, senior Chilz Negrete — like Bement — notching her second-consecutive personal best with a total of 93.

Her front and back-nine totals were also remarkably similar with a 48 and a 45.

The top-six was rounded off by South Tahoe’s Jenna Shortridge’s round of 94.

For the Lady Spartans, sophomore Jaedin Martinez served as their No. 2 golfer — making a 19-stroke improvement for a 102 and a personal best.

“Jaedin was another big one for us today,” Walker said. “I think she took advantage of the course and kept hitting out of the better grass.”

Elko’s scoring was capped by a 107 from junior AJ Anthony.

Spring Creek’s third-best round came off the clubs of senior Rachel Merwin, who closed the day with a 112.

In a non-qualifying team total, Elko junior Katrina DeGuzman went to the clubhouse with a personal-best 117 for the Lady Indians’ fifth card, cutting 16 strokes from her Tuesday round.

Sophomore Grace Heieie gave the Lady Spartans their fourth and final qualifying score in just her second competitive tournament, shaving 10 shots from her Tuesday total with a 118.

After placing fourth overall Tuesday in Spring Creek with a 98, junior Jordan Maher fell to fifth on the Lady Spartans’ team Wednesday with a 119.

“I thought the girls played well again. I think the pressure of playing with the 1s got to Jordan a little bit, but she still stayed around where she should be,” Walker said. “Anything under 120 is pretty good for her. Her 98 yesterday was unexpected and really good.”

Spring Creek’s roster was closed out by a 121 from senior Marie Howard.

The Lady Indians’ varsity team was finished off with a personal-best 129 by freshman Madison Preston.

After playing last year as a freshman on the junior varsity, Elko sophomore Julianna Lozano also set a personal best Wednesday with a score of 120 — Sarbacker noting the total was 20 strokes less than her 2018 season average of 140.

In their first tournaments of their careers, freshmen Gabriella Peracchi and Reganne Wakefield shot 123 and 156, respectively.

The Lady Indians, Lady Spartans and the rest of the 3A North will have nearly two weeks to prepare for another back-to-back — opening at noon Monday, Sept. 16, during the South Tahoe Tournament, at Genoa Lakes Golf Club.

SPRING CREEK — In the league-opening girls golf tournament, the Elko girls notched a first and a second.

WINNEMUCCA — So far, so good.

TRUCKEE, California — Through two tournaments of the Division 3A North girls golf season, there was one winner.

Relax, sit back and Chilz

Never say die. The Lady Indians nearly won Monday's tournament in Dayton without their No. 1 golfer, Gabby Bement, who withdrew from the event with a back injury. Elko regrouped and pulled off the victory Tuesday in Dayton, benefiting from three girls in the top-10 — including a career-best and second-place 88 from Chilz Negrete, a fourth-place 91 by Caresse Basaraba and a career-record and ninth-place 99 from Julianna Lozano.

There’s quite race brewing in the Division 3A North, currently two points separating first and second place. After the sixth girls golf tournament of the season, Elko has won three tournaments — Truckee earning its third title Tuesday. The Lady Wolverines finished with a round of 388, the Lady Indians finishing two strokes off the lead with a 390.

Lady Indians do it again

Following Wednesday's withdrawal of Gabby Bement (back injury) for the third time in four tournaments, the Elko girls golf team rallied once again and won Lowry's tournament with a team score of 404, besting second-place Truckee by 10 strokes.

The Elko girls golf team collected its second state championship in the past-four seasons, regaining its 2016 hardware with a 2019 state title. A nine-stroke first-round lead turned into a 36-stroke domination, the Lady Indians wining first in both rounds — closing the tournament with a 370 for a two-round total of 733. Caresse Basaraba and Gabby Bement earned 1st-Team All-State honors and Chilz Negrete finished with a 2nd-Team All-State selection. Spring Creek's Emalee Ingram tied with Negrete for a 2nd-Team All-State nod of her own.

Elko's Caresse Basaraba stings her drive on Sept. 4, 2019, from the tee box of the par-4 seventh hole at Ruby View Golf Course. Basaraba shaved 11 strokes from her fifth-place round of 99, at Spring Creek Golf Course, and placed third overall with a round of 88 on matching scores of 44 on the front and back-nine holes. The Lady Indians won their home tournament with a team total of 371.

Spring Creek's Emalee Ingram follows through on her drive on Sept. 4 on the par-4 seventh hole, at Ruby View Golf Course. She led the Lady Spartans and placed fourth overall with a round of 92.