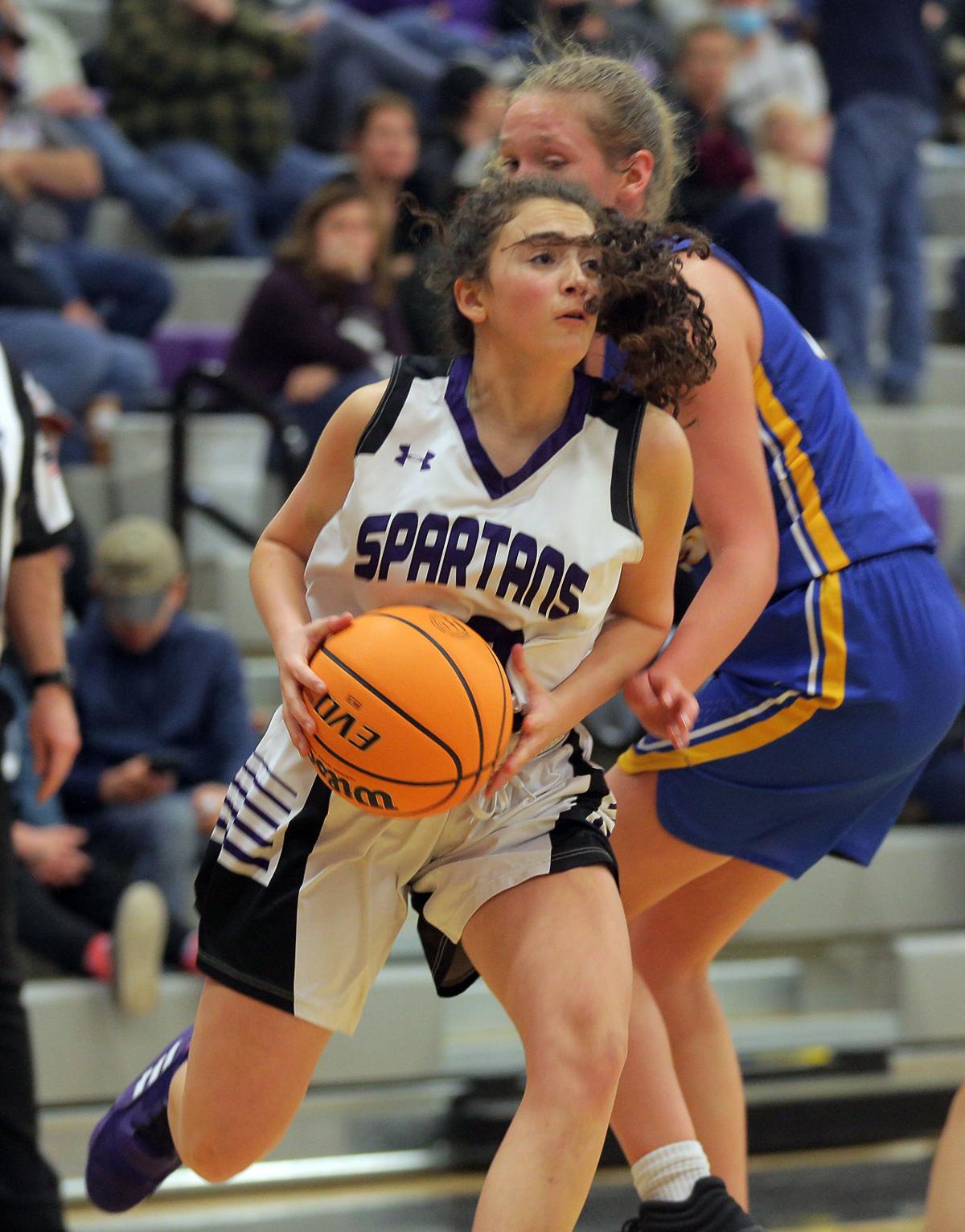 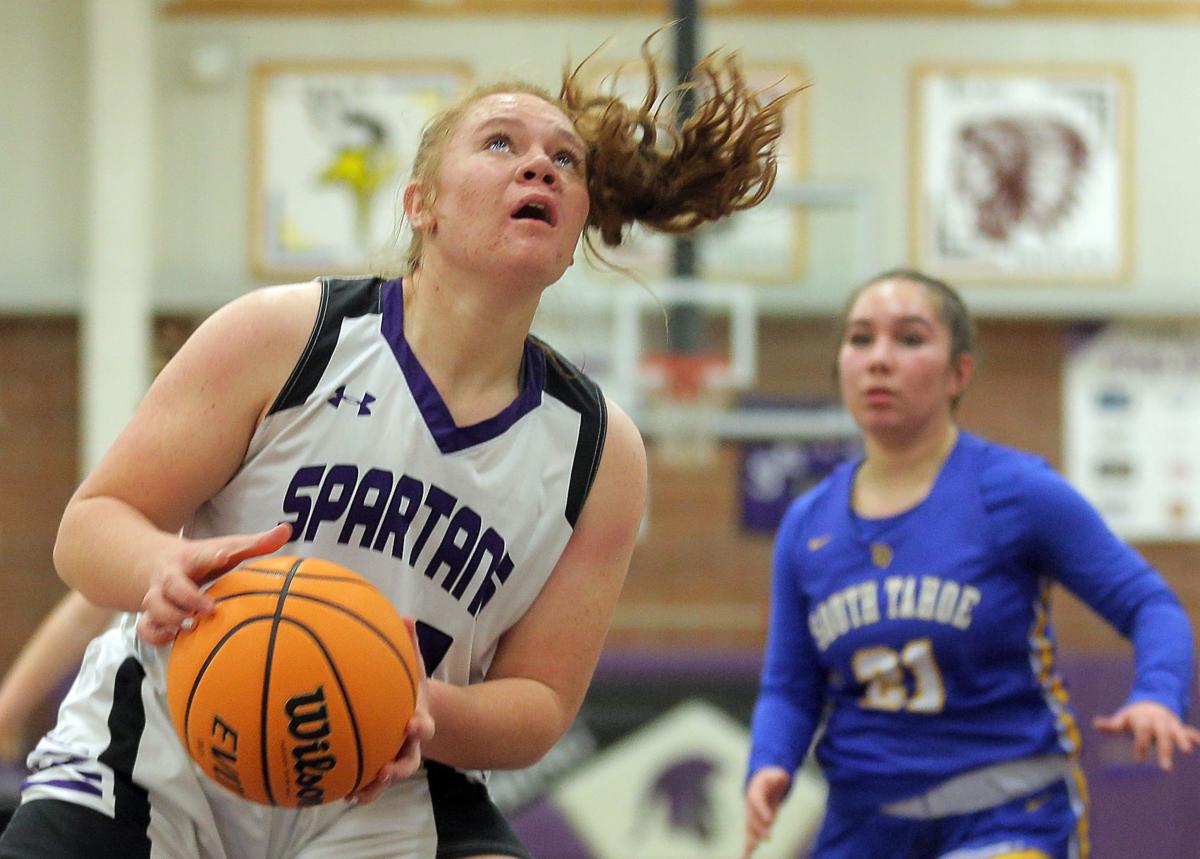 Spring Creek's Ella Buzzetti gathers for a layup against South Tahoe on Friday, Jan. 14, 2022, in Spring Creek. Buzzetti scored all seven of her points in the first half, and the Lady Spartans exploded for a 28-3 advantage in the second quarter during a 67-41 victory over the Lady Vikings.

SPRING CREEK — Thanks to a 28-3 explosion in the second quarter, the Spring Creek girls basketball team rolled to its 14th-consecutive victory.

On Friday night — after a 12-12 tie with South Tahoe — the Lady Spartans cruised to a 67-41 victory over the Lady Vikings.

The Lady Vikings began the game well, both on offense and defense.

Spring Creek found the board on a transition deuce from senior Payge Walz on an outlet by senior Shyann Lamb.

Gonzalez stroked a long two and dropped a floater down the middle for an 8-2 advantage, and junior Kiva Davis added a deuce for a 10-2 tally.

The Lady Spartans earned a free throw from junior Ella Buzzetti and a floater off a curl by Walz.

Spring Creek began to change the complexion of the contest on the defensive end, pressing full court and playing hard-nosed man in the half-court.

Buzzetti drained a long two-point jumper and brought the margin to three at 10-7, then Lamb made a steal and raced to the cup for a layup.

After forcing another turnover, the Lady Spartans went to the front on the offensive glass — Walz pulling down a board and sticking the put-back for an 11-10 lead.

Lamb was fouled after snagging another steal and hit 1-of-2 free throws for a two-point cushion, which was erased with a clean to the stripe on the other end by Gonzalez — who scored nine points in the opening frame.

After the first, Spring Creek found itself in a 12-12 tie.

Gonzalez continued her excellent work with a crossover and left-handed finish for a 14-12 South Tahoe surplus, but Lamb tied the game with a pair of free throws — starting a Spring Creek explosion.

Walz reeled in another takeaway and drove the floor, finishing after a filthy Euro step.

Lamb stole in the inbound pass and banked home her shot on the left side, and Buzzetti scored on the break from a Magic Johnson-like bounce pass through defenders by Lamb.

With Gonzalez on the bench, the Lady Vikings could not handle the ball or break Spring Creek’s trap — turning the rock over with regularity.

Lamb scored once again from a steal, Walz finished against contact on the right side and drilled a runner.

She then completed an old-fashioned three after a dime from junior Brynly Stewart, who also set up the next score on a three by Lamb.

Gonzalez ended a 22-0 run with a free throw, but the half closed with consecutive triples by junior Taylor Brunson — who hit her shots from opposite corners.

Stewart opened the third quarter with a pump fake and drive for a deuce on the baseline, Keim was fouled after an offensive board and cashed both freebie and Lamb scored from another steal.

South Tahoe gained a three from the right wing by Davis, but Lamb got the bounce on a mid-range J.

The Lady Vikings scored the next five, as senior Sage Smith followed up a missed shot and Gonzalez buried a pull-up trey — making the score 48-23.

Lamb worked free after a series of screens for a three on the right side, but Smith stuck a two-point jumper on the other end.

Baisley answered with a jumper for the Lady Spartans, opening a 28-point lead at 53-25, Lamb pushing the advantage to 31 with a triple from the opposite corner of her previous bomb.

Gonzalez cut the deficit to less than 30 with a deuce for the Lady Vikings.

Entering the fourth quarter, the Lady Spartans led by 29 with the score at 56-27.

Freshman Roxanne Keim grabbed an offensive board and made a put-back for a 58-27 lead, but Gonzalez railed a straightaway three for the Lady Vikings.

Brunson swished her third triple of the contest on a pass from Baisley, pushing the margin to past double once again at 61-30.

However, Gonzalez sized up her defender and drilled a rank step-away bomb — assuming the role of the leading scorer in the contest — bringing the score to 61-33.

Brunson got her defender in the air and dribbled in for a midrange jumper, Wolfe sticking a left-wing three for South Tahoe.

Roxanne Keim nailed a long-two from the left wing, sophomore Aiden Menke responding with a bank shot on the right block — Keim then making a steal and going coast-to-coast for a layup.

Wolfe provided the last field goal — hitting her second three of the quarter from the left wing — but the Lady Spartans rolled to a 26-point victory by a final score of 67-41.

Lamb led the Lady Spartans with 22 points — splashing a trio of treys — and sat the entire fourth quarter.

Walz finished with 15 points — providing all of her offense in the first half — and Brunson gave the Lady Spartans their third double-digit scorer with 11 points and dropped three 3s.

Buzzetti scored all seven her points in the first half for Spring Creek, and Wolfe notched six of her seven points in the fourth quarter for South Tahoe — hitting two triples.

Spring Creek’s offense was rounded out by two points apiece from Rylee Keim, Baisley and Stewart.

The scoring for South Tahoe was capped with a deuce by Menke.

The Lady Spartans (14-1, 3-0 in league) will resume Division 3A North-East action against Lowry — likely a contest that could determine the league title — at 6 p.m. Wednesday, in Spring Creek.

The Division 3A North-East title and a first-round bye for the regional tournament may take shape when the Lady Spartans (14-1 overall, 3-0 in league) host the Lady Bucks (10-3 overall, 2-0 in league) at 6 p.m. Wednesday, in Spring Creek.

Spring Creek's Ella Buzzetti gathers for a layup against South Tahoe on Friday, Jan. 14, 2022, in Spring Creek. Buzzetti scored all seven of her points in the first half, and the Lady Spartans exploded for a 28-3 advantage in the second quarter during a 67-41 victory over the Lady Vikings.