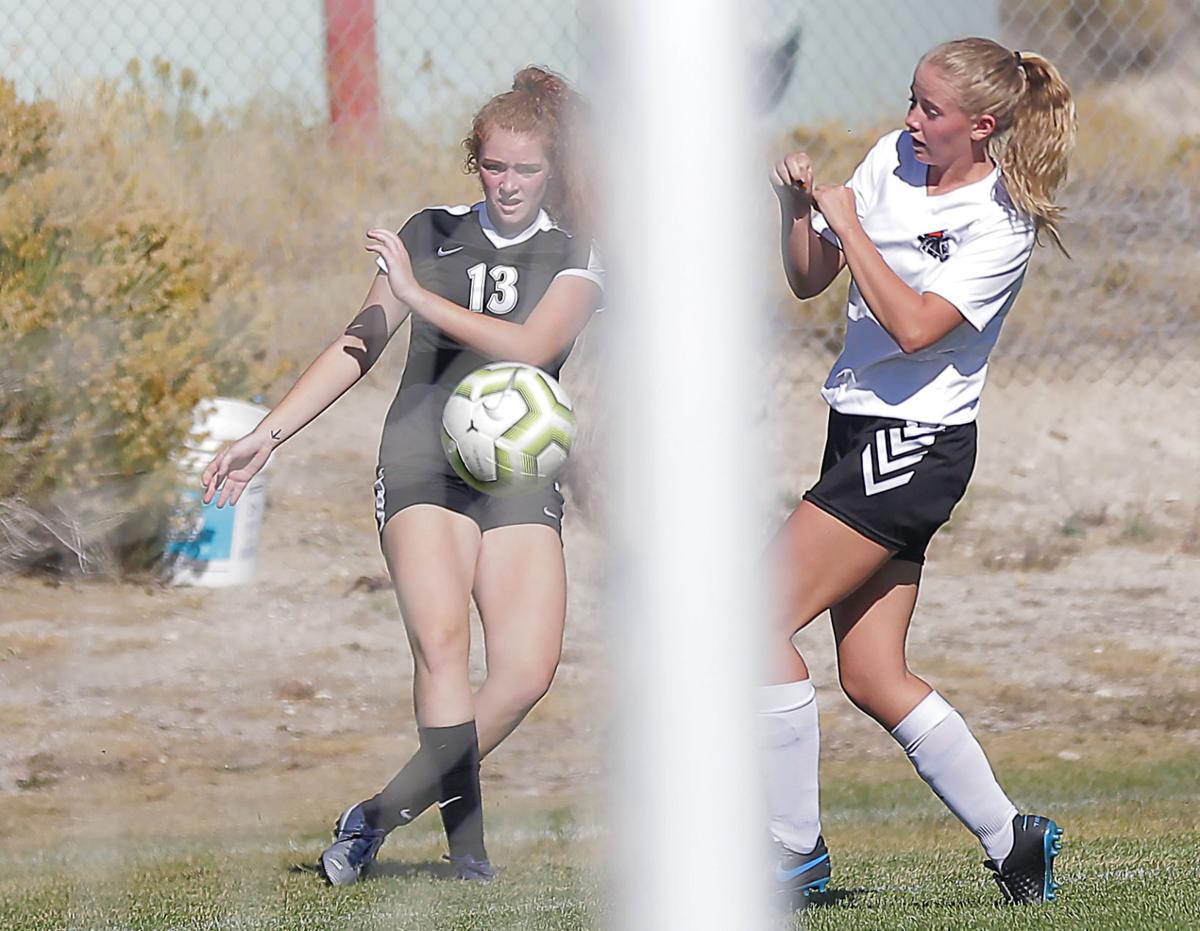 Spring Creek's Avery Beatty, left, crosses a pass against Fernley to teammate Riley Moon for one of Moon's two goals in the contest on Friday, Sept. 24, 2021, in Spring Creek. Beatty netted two goals of her own in a 7-0 victory in the Lady Spartans' league opener. 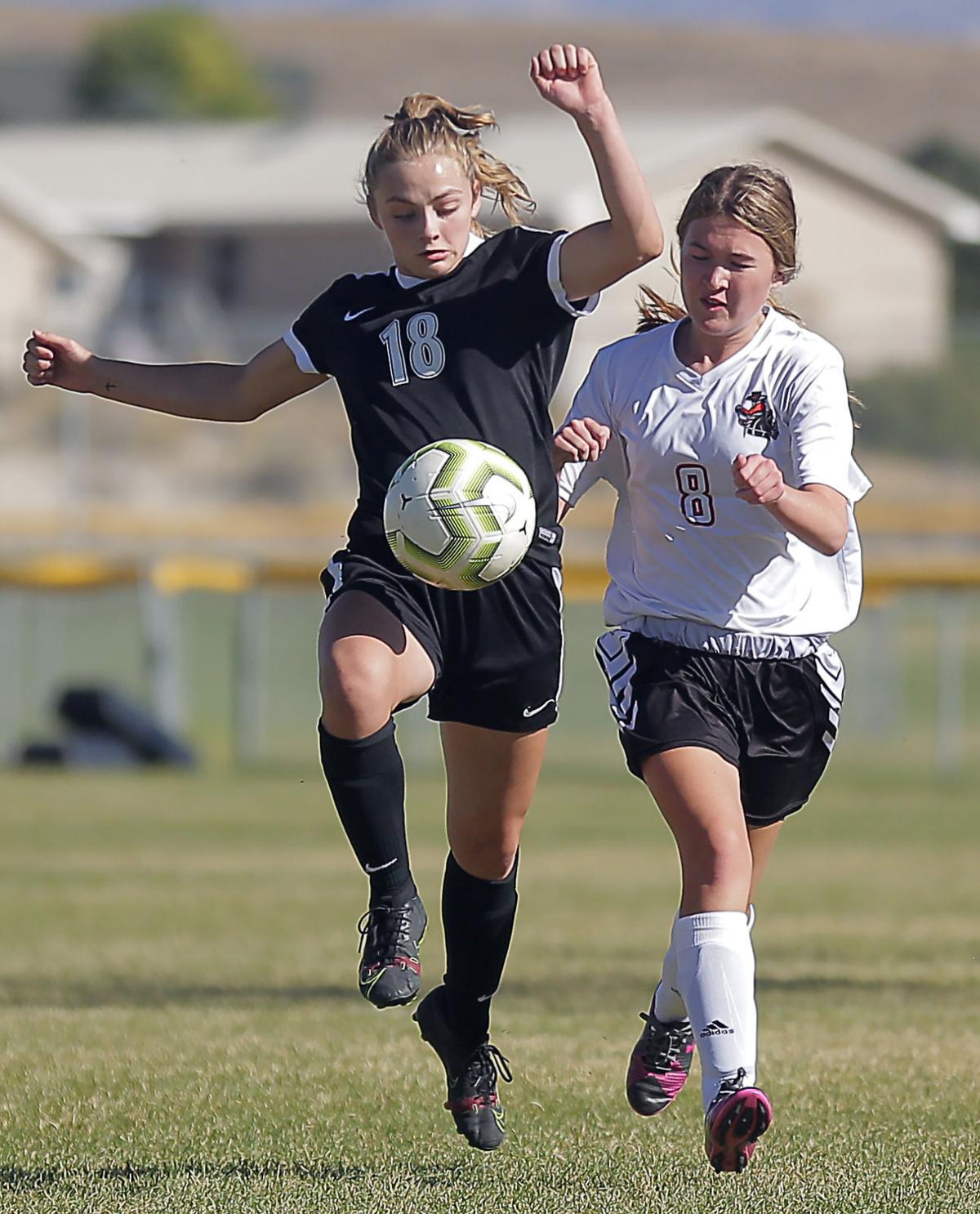 Spring Creek's Jacey Lindquist, left, wins possession of a ball next to Fernley's Amelia Stolting on Friday, Sept. 24, 2021, in Spring Creek. Lindquist gave the Lady Spartans a 3-0 lead in the first half with the first varsity goal of her career. She added two scores in Spring Creek's 4-0 Saturday victory over Dayton.

SPRING CREEK — In its Division 3A North-East opener, the Spring Creek girls soccer team scored in bunches — putting together goals in streaks — rolling to a 7-0 over the Lady Vaqueros of Fernley.

The first push toward either frame was made by Fernley sophomore Kiriann Johnson, who dribbled through contact and multiple defenders before getting off a shot on the left side of the field.

On the other side, Spring Creek junior Syerra Silva had a shot deflected in the middle of the pitch — the ball saved by Fernley’s keeper.

However, in the third minute, the Lady Spartans drew first blood — senior Ellie Herman possessing and dribbling, knocking home a gorgeous shot from long distance in the upper portion of the net for a 1-0 lead.

Moments later, junior Kianna Green one-touched a toe poke from the left edge on a cross from the right — skipping her attempt over the frame.

Silva took a shot from the left side and pushed the kick wide to the left as well, and junior defender Arena McDermott flipped the field with a dribble down the right side — her ball traversing to the keeper.

Spring Creek began to find chances with regularity, a free kick by junior Avery Beatty sailing high over the crossbar.

Silva bodied a cross as the ball went from right to left, but the goalie came forward and pinned the ball.

In the 16th minute, the Lady Spartans’ advantage doubled.

Beatty dribbled deep down the right side and bent a cross low above the ground to the left edge, where junior Riley Moon thumped the ball out of the air for a 2-0 lead.

Moon then found a clean look from the middle but sent the shot wide to the left.

Five minutes removed a two-goal cushion, the margin went to three with a sweet play from a youngster.

After a pass by senior Lexy Ballew, freshman Jacey Lindquist won possession of the ball on the left wing and used some nifty footwork to free herself from traffic, torching the net with a line drive.

In the 21st minute, Spring Creek was on top 3-0 — which remained the score at halftime — despite the Lady Spartans creating a plethora of chances to pad the lead.

Senior Shyann Lamb screamed a low drive on the ground that was scooper up by the goalie, and Moon hit a ball into the side of the frame after a multitude of deflections in the box.

On a long direct kick, Lamb punched a rope off the left corner — Walz then pushing down the left side before having the ball picked up by the keeper in traffic.

Senior Abigail Waldron hit a low roller from the middle, which was saved by the keeper, and Spring Creek freshman goalie made a save on a Fernley free kick.

Walz had a kick that was stopped after a great pass to the left wing on a long free kick by Beatty.

Near the break, Silva dribbled down the field and turned the baseline — her cross grabbed in a jam.

To start the second half, she had an attempt that was saved by the Lady Vaqueros’ goalie — who made a nice snag on a hard shot by Walz ahead of the field on the left wing.

But, Spring Creek finally extended its lead to four in the 52nd minute.

After a scoreless stretch of about 30 minutes, Beatty pounded a ball with authority from the middle for a 4-0 tally.

The Lady Spartans had consecutive free kicks that were saved, and Silva missed a shot wide —Spring Creek sending another ball toward the frame in the middle that was punched out with a toe stab.

In the 63rd minute, Moon booked her second score of the contest with a wide-open gimme on the left edge from a corner by Lamb.

Lamb pushed a ball wife to the right after a nice give-and-go play with Lindquist, and Ballew sent a kick wide to the right from the middle.

Walz came extremely close to opening a six-goal lead on the left side, but the ball was deflected around and finally grabbed.

Beatty did, in fact, open a 6-0 advantage in the 70th minute — scoring wide open behind the defense on the right wing — set up with a great look from a Lamb kick.

Silva then sent a beautiful thru ball toward the right edge to Lamb, who hit her shot with too much sauce and drilled the ball high over the frame.

On a corner kick, the Lady Spartans dribbled the ball in and passed around — setting up a pretty play in the middle — but the ball was missed.

In the 76th minute, Lamb finally got her goal — scoring unopposed on the right wing — assisted on the play by junior Caitlin Cromwell.

Fernley made a rare appearance in Spring Creek’s box late in the contest, but freshman keeper Abby Wakefield came forward for a nice scoop in front of the running offensive player.

At game’s end, the Lady Spartans won their 3A North-East opener by a final score of 7-0.

The Lady Spartans will face Dayton at 10 a.m. Saturday, in Spring Creek.

Lady Spartans tear through Elko in 3

Despite the lopsided outcome, several of the games were close — Spring Creek winning by scores of 25-20, 26-24 in extra points and closing the door with a 25-17 win in the largest margin of any frame in the third.

Elko blows through Dayton in 1st half

Elko (3-0 in league) is in sole possession of first place in the 3A North-East standings and will try to solidify a first-round bye for the regional playoffs — a crossover postseason versus the 3A North-West — in its regular season finale against Spring Creek (1-2 in league) at 7 p.m. Friday, at Warrior Field, during the Indians’ homecoming and senior-night ballgame.

Spring Creek (4-0-1 in league) will begin the second half of the league schedule with what should be its easiest road trip, playing the Lady Vaqueros (0-5 in league) at 3:45 p.m. Friday, in Fernley, and closing against the Lady Dust Devils (2-2-1 in league) at 11:45 a.m. Saturday, in Dayton.

Spring Creek's Avery Beatty, left, crosses a pass against Fernley to teammate Riley Moon for one of Moon's two goals in the contest on Friday, Sept. 24, 2021, in Spring Creek. Beatty netted two goals of her own in a 7-0 victory in the Lady Spartans' league opener.

Spring Creek's Jacey Lindquist, left, wins possession of a ball next to Fernley's Amelia Stolting on Friday, Sept. 24, 2021, in Spring Creek. Lindquist gave the Lady Spartans a 3-0 lead in the first half with the first varsity goal of her career. She added two scores in Spring Creek's 4-0 Saturday victory over Dayton.