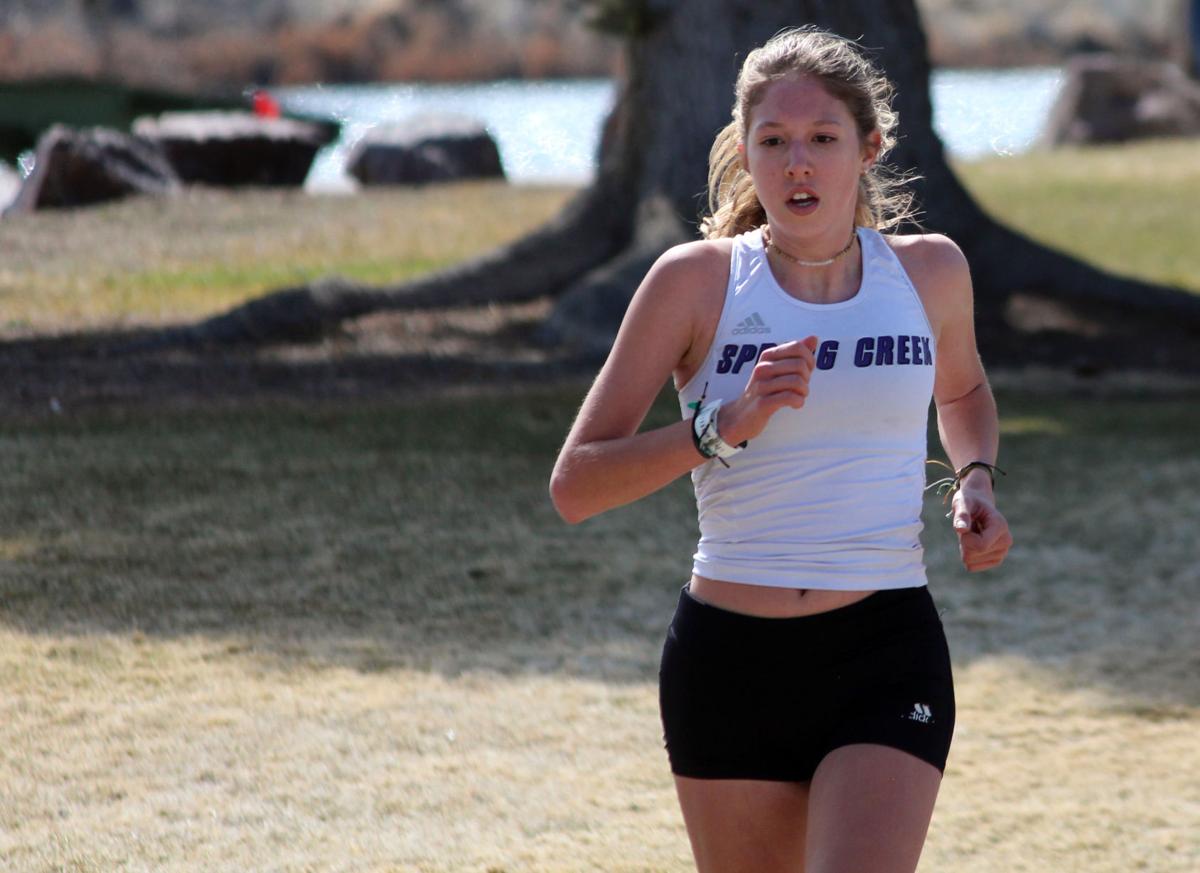 Spring Creek's Kendra Lusk strides for the finish line on Wednesday, March 24, 2021, at the Spring Creek Marina. Lusk won the girls division with a time of 19:13.7. 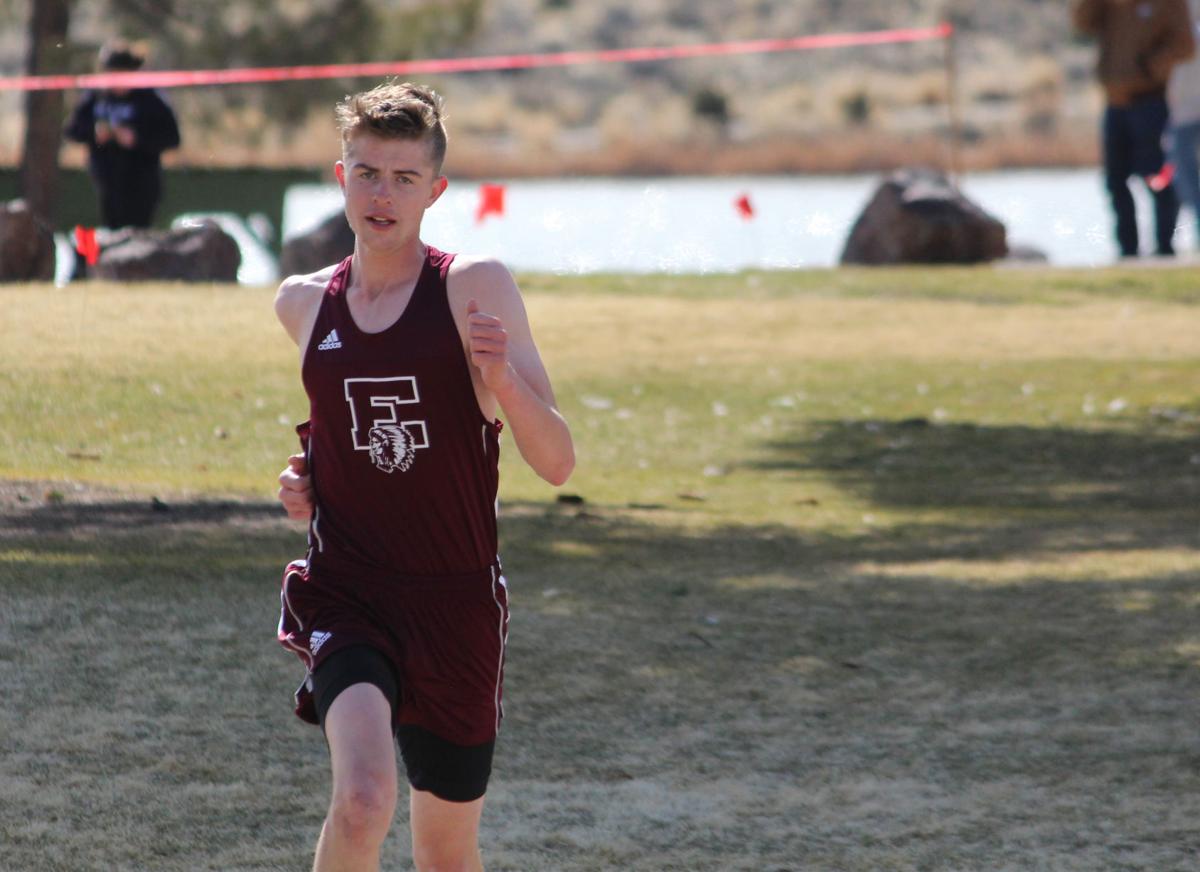 SPRING CREEK — Many cross country runners completed the same course in a matter of a week, others ran around the Spring Creek Marina for the first time on Wednesday.

In Spring Creek’s second cross country meet, both the Spartans and the Lady Spartans took first place against visiting Elko.

In addition, the top spot in the girls race was a familiar face.

However, there was same shakeup atop the leaderboard in the boys race.

Spring Creek senior Kendra Lusk — the defending Division 3A state champion — legged out a sizable lead over the competition.

She was followed in second place by senior teammate Grace Florence, who crossed the line in 21:16.4 — running a nearly-identical race to her 21:16.6 on March 16.

Senior Emma Campbell jumped from her fifth-place 22:07.1 to third place on Wednesday, finishing faster with a 22:00.8.

Freshman Brianna Perchetti capped a top-four streak for the Lady Spartans with a time of 22:09.5.

Elko’s top runner was freshman Reese Hatch, who rounded out the top-five with a time of 23:10.5 in her first trek around the course.

Spring Creek went back to work and back-to-back, senior Jaden Pool taking sixth in 24:14.4 and sophomore Brandi Manhire following with a 24:41.1 for seventh place.

Elko freshman Tandi Ratliff ran second for the Lady Indians and eighth overall with a time of 25:35.3, and Spring Creek junior Jaleesa Woo crossed ninth in 26:51.1.

The Spartans won the team title — crossing 11 runners in the top-12 — but the individual crown went to Elko junior Isaiah Dahl.

In his second run of the season, Dahl darted across the finish line in 17:23.3 — opening a 26.4-second cushion ahead of second place.

Hamilton began a streak of 11-consecutive Spartan runners, third place going to senior Conner Gage with a time of 18:13.2 — more than 14 seconds better than his run on the same course the week before.

Fourth place was claimed by sophomore Joel Herman — who crossed right behind Gage with a time of 18:13.9 — who nearly subtracted 23 seconds from his run on March 16.

The top-five was capped by an 18:45.9 from sophomore Jake Bradford, who made a near 35-second improvement in a week.

Fellow senior Garret Frisbie ran eighth in 19:17.7, and ninth went to the 19:18.5 from freshman Nathan Thomas.

The Spartans flurry of black, white and purple was finished with an 11th-place 19:42.2 by junior Josh Lore and a 19:54.2 for 12th place from sophomore Gage Kelly.

Elko junior Gavin Nicola finished mid-pack in 13th place with a time of 19:54.5, starting a string of three straight for the Indians.

The Spartans sent the final-three runners over the line, rounding out the field with the 24th-place time of 25:09.7 by sophomore Thomas Canning, the 25th 30:19.1 from sophomore Kaleb Costa and the 26th-place 30:20.8 by sophomore Justin Esparza.

Half of the teams will compete in Elko’s second meet of the season at 2 p.m. Tuesday, March 30, at Adobe Middle School.

Other are scheduled to run against Lowry at 2 p.m. Tuesday, March 30, in Winnemucca.

Check out some still photos from the boys race during the Elko cross country meet on March 6, 2021, at Adobe Middle School

Spring Creek's Kendra Lusk strides for the finish line on Wednesday, March 24, 2021, at the Spring Creek Marina. Lusk won the girls division with a time of 19:13.7.