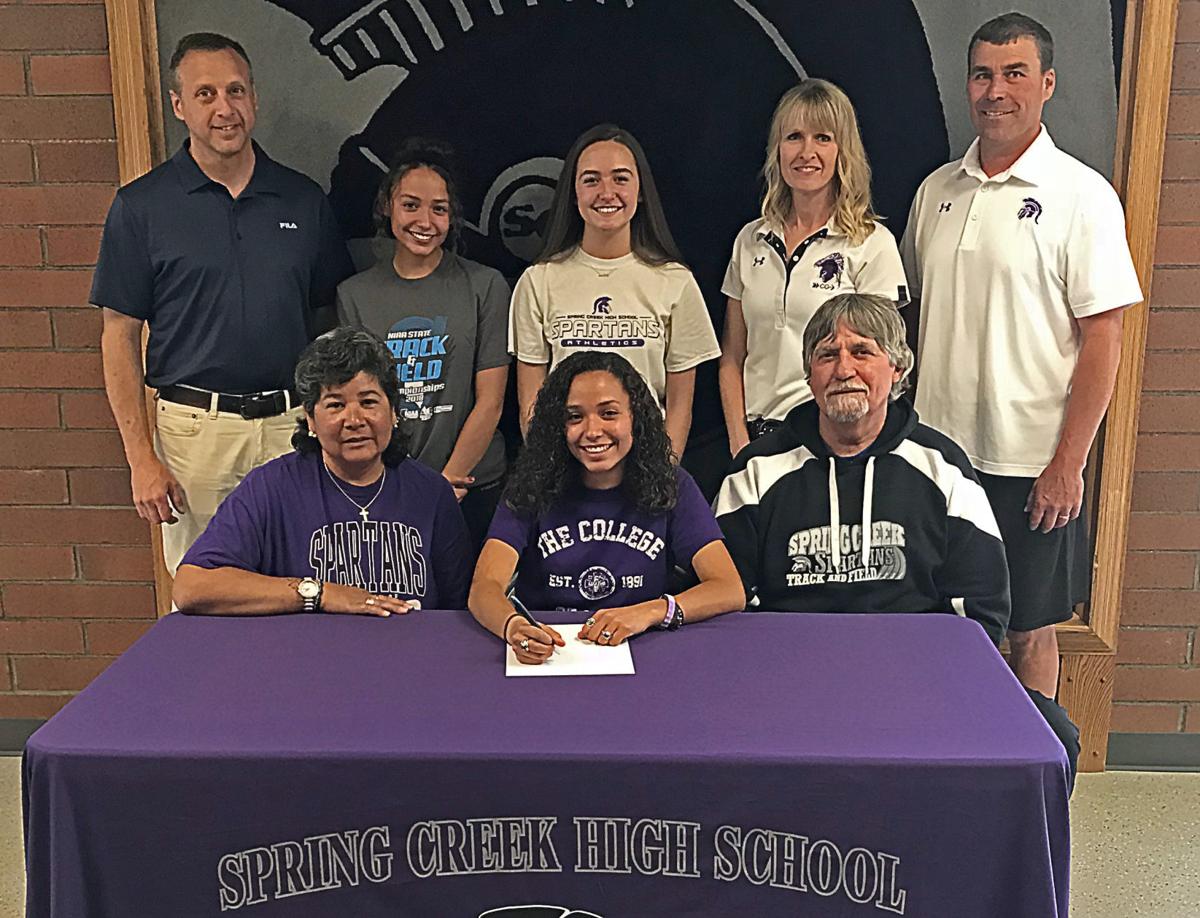 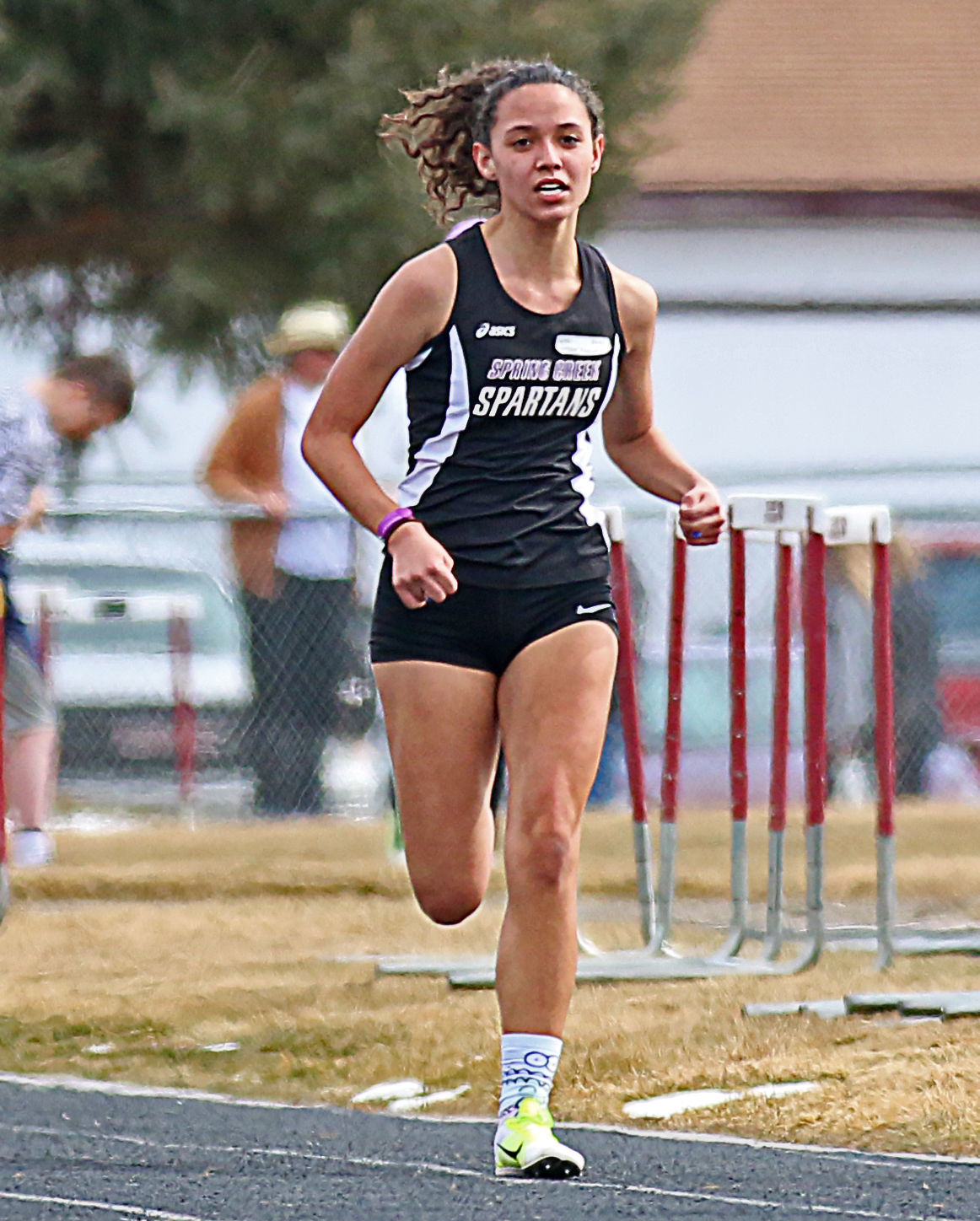 Spring Creek's Larissa Mauer wins the 3200 meters on March 10, 2018, during the Elko League Meet, at Warrior Field, finishing with a time of 13-minutes flat.

SPRING CREEK – Canidae is the biological family of carnivores that includes dogs, wolves and coyotes – animals that run in packs.

For as long as they have been alive, the Mauer twins have done everything together – an inseparable duo.

Spring Creek senior Larissa Mauer will experience what it is like to run alone, signing to compete in three sports at College of Idaho, in Caldwell, originally brought on board to run cross country – now choosing to participate in the indoor and outdoor track seasons for the Coyotes as well.

Twin sister Alandra has decided to hang up her running spikes, at least competitively, and attend College of Southern Idaho, in Twin Falls.

“I hope to know what it feels like to be by myself and experience college on my own. It will be interesting to do something alone and without Alandra. I always took care of both of us,” joked Larissa Mauer.

While one running career appears to be finished, Larissa Mauer hopes to continue her winning ways at the collegiate level and add to an already-impressive list of accomplishments.

“She is the most decorated of our recent runners. I’m excited to see what she can do in college,” said Spring Creek cross country and track coach Todd Mahlke. “She was part of two cross country state championships and finished second twice. She was in the top-four of our runners every year. They’re getting a hard worker.”

Larissa Mauer made two visits to College of Idaho, the first trip coming in February and the second occurring “about a month later,” also considering Eastern Oregon University after a trip in April.

In addition to her success with the Lady Spartans in state cross country championships in 2015 and 2017 and runner-up finishes as a freshman and a junior in 2014 and 2016, Larissa Mauer’s personal achievements are also vast.

She placed in the top-11 in the state cross country meet every year of her four-year varsity career – bookending her freshman and senior seasons in 11th place – ranking sixth in each of her sophomore and junior years.

In the 2016 Division 3A Nevada State Cross Country Championships, she clocked in at 19:45 for the personal-best time of her career.

Cross country was not the only sport she made notable impacts in, also competing at the varsity level all four seasons of her track career.

She did the bulk of her damage in the longest relay, also achieving remarkable finishes in the lengthiest-individual race.

Competing with sister Alandra three times at the state meet in the 4x800 relay, the Lady Spartans came as close as possible to winning a championship in three of the past four seasons.

Spring Creek took second in the event in back-to-back years in 2015 and 2016, falling to third in the Mauers’ junior season, digging out another runner-up finish in the 2018 Division 3A Nevada State Track and Field Championships on May 18-19 at Carson High School.

“The thing I enjoyed the most about running in high school was probably the people. When you are around people who want to win first, they train very well together,” Larissa Mauer said. “In college, I’m looking forward to meeting new people and getting faster.”

Larissa Mauer’s mother, Helena Kizer-Mauer, said Larissa’s decision to run at College of Idaho and Alandra’s choice to focus on school at CSI is “bitter sweet.”

“We have always watched them run together, and now, they won’t run together anymore,” she said. “I’m going to miss watching her (Larissa) run, but we won’t make a lot of the trips. The girls have had great coaches (Todd and Larissa Mahlke), but we have one more coming up, so the Mahlkes aren’t done with us yet.”

Larissa Mauer’s father, Al Mauer, reiterated the sentiments and added that he is excited about what the future holds.

“I think her grades will be there, so I’m looking forward to seeing how she runs,” he said.

While she will be away from Alandra for the first time, Larissa Mauer won’t be entirely alone, as Spring Creek Class of 2017 graduate Cole Campbell also runs for the Coyotes.

While at College of Idaho, she plans to study psychology.

“I want to get my doctorate and go into therapy,” Larissa Mauer said.

Congratulations to Larissa Mauer on her successful high school career and best wishes as she transitions to the collegiate level, taking her first steps into adulthood and her first ones by herself in the Cascade Collegiate Conference, strides tailor-made for a gifted athlete and an ambitious young woman.

The College of Idaho cross country programs are not only winning, they’ve found something in Elko County Athletes.

If you haven't noticed, College of Idaho's Larissa Mauer — a Spring Creek High School Class of 2018 graduate — is tearing up all running surfaces in cross country, indoor track and outdoor track. Check out her achievements and progression here!

Spring Creek's Larissa Mauer wins the 3200 meters on March 10, 2018, during the Elko League Meet, at Warrior Field, finishing with a time of 13-minutes flat.