ELKO — Due to more added money, the fact that rodeos all over the country have been canceled due to COVID-19 and a field like never before at the Silver State Stampede — records came and records fell.

Altogether — strung across three performances and two portions of slack — the three-day Stampede welcomed a total of 624 Wrangler National Finals qualifications and 51 world titles across the most-talented entrants ever seen in Elko.

As for timed events, $4,250 was added to the pots of the steer wrestling, tie-down roping and both sides of the team roping — heading and heeling.

“It was a lot of fun. I don’t think they’ve ever had a rodeo that big there as far as entrants or talent,” said PRCA announcer Jody Carper. “COVID helped, but the Stampede committee did a lot of work and got more added money.”

With the best rodeo hands in the world making their ways to Elko County Fairgrounds, several arena records fell — which have been complied by Carper.

“I went back through old rodeos, but I didn’t dig back to 1913 or anything,” he said. “I want to make it interesting (for the fans) and give them some history of the rodeo.”

Along with sharing a total purse of the rodeo that was worth a whopping $111,842, winners of each event were also awarded a pair of the coveted Garcia spurs.

Before he nodded his head, Riggin Smith, of Winterset, Iowa, was chasing an 87 set in 2010 by Jesse Wright — who also rode in the performance.

Aboard Bar T Rodeo’s “Jitter Bug,” Smith saw the 87 and raised the stakes — spurring the red roan for a new standard — posting an 88 for the record and pocketing $3,260 for the win.

With a total of $2,499 Harper was claimed the Nevada Top Gun Award — given to the highest-earning Nevada contestant — earning another $1,000 in prize money.

“Last year, we gave an engraved Henry Golden Boy .22-caliber rifle in memory of Walter Leberski,” said Stampede Committee member Alkie Mariluch. “This year, the engraving place was closed because of the coronavirus, so we gave the $1,000 instead.”

While Harper lost his bid late to win the saddle bronc, Keatchie, Louisiana’s Will Lummus wasted no time to slam down the winning run in the steer wrestling.

As the third man out in Friday’s performance, Lummus lit up the scoreboard and tied the arena record with a time of 3.6 seconds — sealing his victory early — stacking $2,454 into his jeans.

Entering Sunday’s third and final performance, a pair of 4.6s topped the leaderboard.

That was before Baker City, Oregon’s Garrett Rogers and Ellensburg, Washington’s Jake Minor took their throws.

With Rogers on the front, he cracked a knot around the steer’s horns and gave a nice handle as he went left — Minor nearly throwing his rope too high on the right leg but coming away with a clean heel shot around both feet.

Rogers and Minor each raked in $3,474 for their efforts.

The tie-down roping turned into the fastest-ever collection of times at the Stampede.

Although the arena was not broken, it was tied — twice.

The first to do so happened to be the very-first man to throw his rope.

Garrett Busby, of Steamboat Springs, Colorado, knocked a start at the barrier and was as smooth as glass on the ground — stopping the lock in 8.0 seconds — matching the 8.0 set by J.C. Malone during the 2016 Stampede.

Busby survived a loaded field of calf ropers during the Friday and Saturday performances, as well as a pair of slacks, but he could not fend off all comers.

During the Sunday performance, Fillmore, California’s Tyler Forsberg made his charge for first.

Forsberg also made a quick catch and blew threw his calf on the ground with a strong flank and a rapid tie, posting an 8.0 of his own.

Busby and Forsberg each tied the arena record and added $2,623 apiece to their causes.

Also competing in the team roping, Busby was named the Stampede’s All-Around Cowboy.

On top of Bar T Rodeo’s “Head Honcho,” Foss showed the pony who was boss.

Starting from the right side of the announcer’s stand and circling around to the left, Foss was never anywhere but in the horses’ neck and right in the middle.

After a competitive, steady dose of similar runs in the barrel racing — one woman dashed to the top.

Running in the dark during Saturday night’s performance, Arlington, Arizona’s Tanya Jones stamped the victory by a slim margin of five-hundredths of a second.

Jones was tight to the barrels and her sorrel, strip-faced horse ran hard — making a great push around the third barrel — serving as the difference in a knife-fight type of event for a time of 16.15 and the $2,365 payday.

The winning ride in the bull riding came late in the rodeo.

After Saturday night, the top scores were pair of a 84.5s.

Derek Kolbaba notched an 84.5 on Friday and D.J Parker Jr. matched the score in the Saturday performance.

Despite getting over the front of the bull and loose with his inside foot, Carter withstood the bull’s challenge to drive his face in the dirt and went to the top of the standings with an 85-point ride for a check worth $3,638 — the largest of the rodeo.

The 2020 Stampede Grand Marshal was former announcer Zeb Bell, who has called rodeos for 48 years, including the Wrangler National Finals Rodeo on numerous occasions, was chosen to announce at the 1996 Atlanta Olympics and the World Equestrian Games, in Spain.

The 2020 winners of the Stampede's poster contest was Tom Baker, who drew a work of a rodeo clown as a barrelman.

Congratulations to the winners of the Silver State Stampede, kudos to the Stampede committee and Bar T Rodeo for producing a stellar event and thanks to all of the entrants — including some of the finest hands the world of rodeo has even seen — for traveling to Elko.

The Gold Rush is on 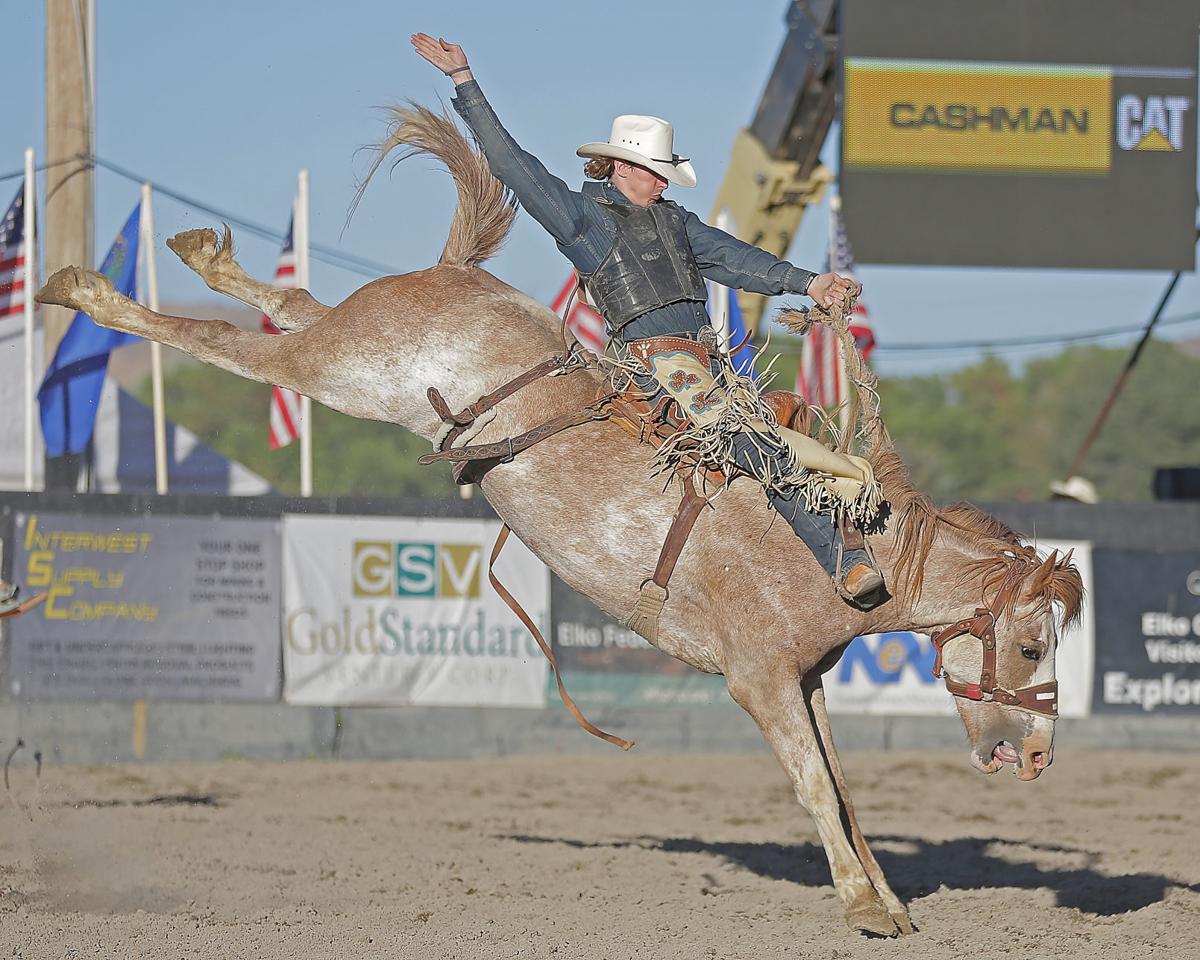 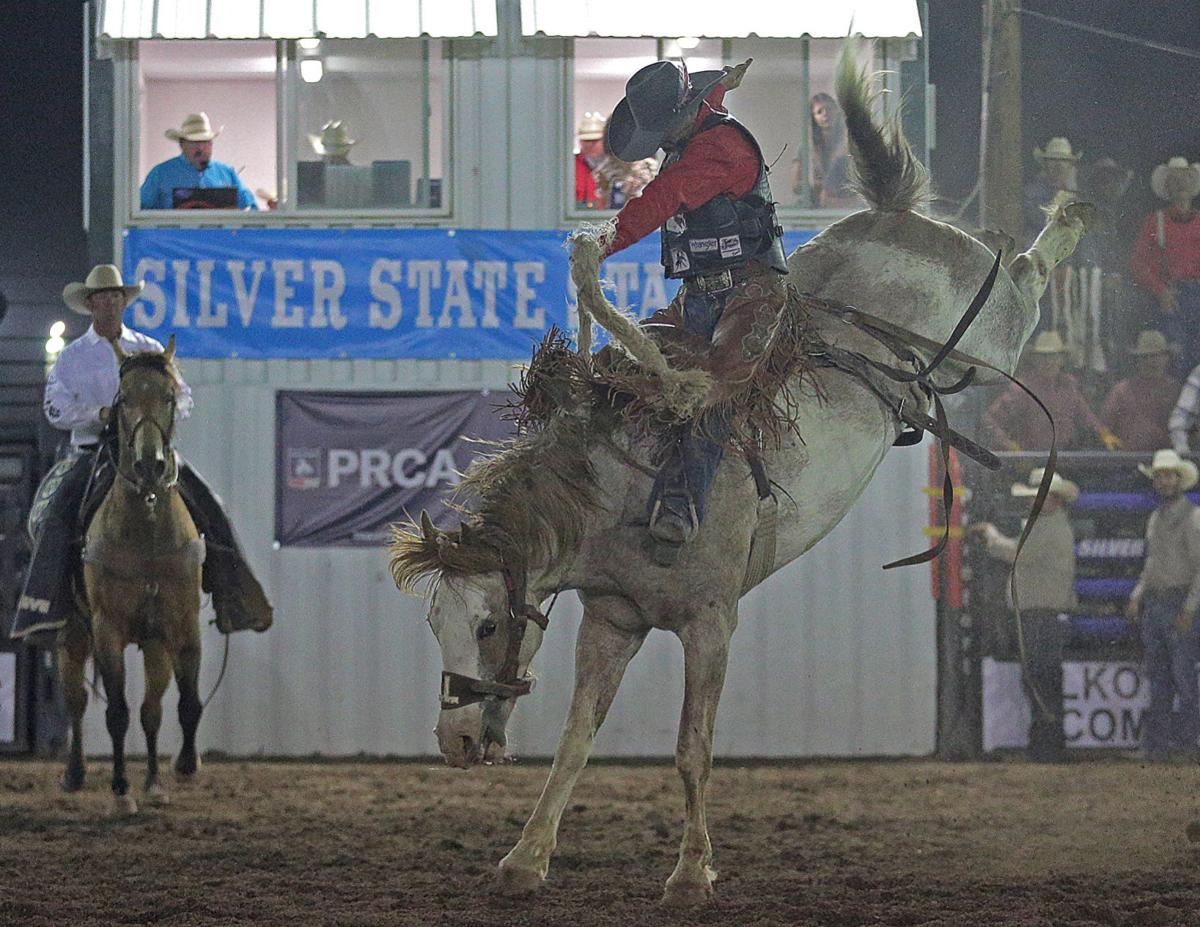 Paradise Valley's Joe Harper knifes his bronc for 86.5 points Friday during the Silver State Stampede, the highest-marked saddle bronc ride of the performance. Harper earned the Nevada Top Gun Award, given to the highest-earning Nevada contestant of the rodeo. He placed second for $2,499 and claimed the $1,000 prize for the Top Gun. 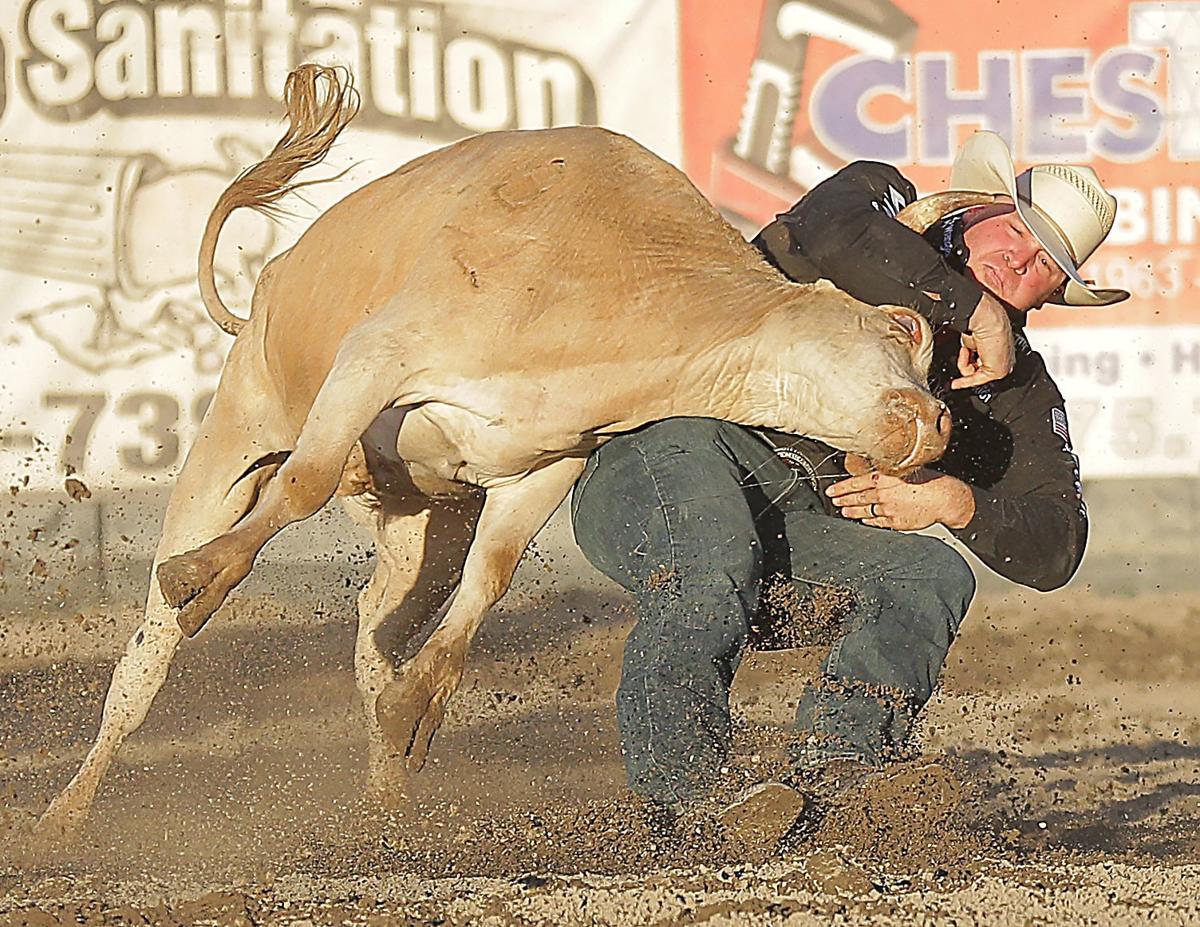 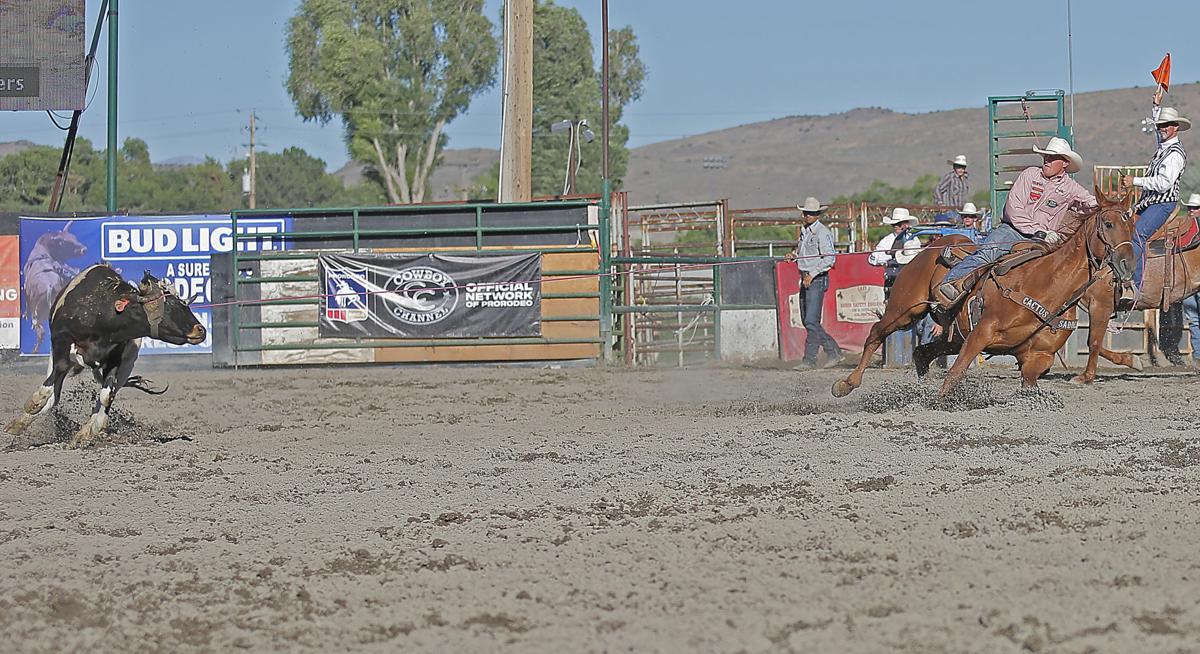 Garrett Rogers turns a steer Sunday in the team roping for partner Jake Minor during the Silver State Stampede, at Elko County Fairgrounds. Rogers and Minor tied the arena record with a time with a 4.2 seconds. They each won $3,474 on the run. 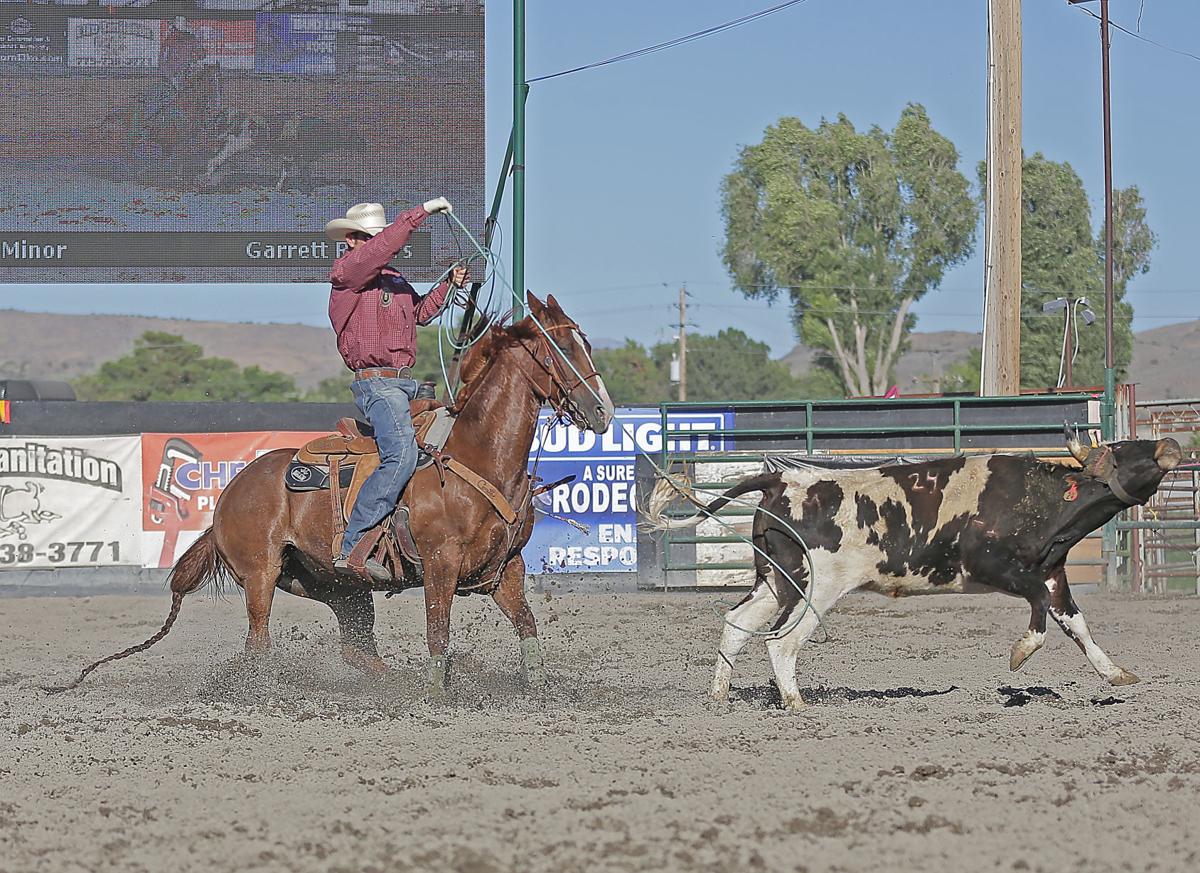 Jake Minor pulls his slack on a heel shot Sunday for partner Garrett Rogers during the team roping of the Silver State State Stampede, at Elko County Fairgrounds. The duo stopped the clock in 4.2 seconds, tying the arena record. Rogers and Minor each collected $3,474 on the run. 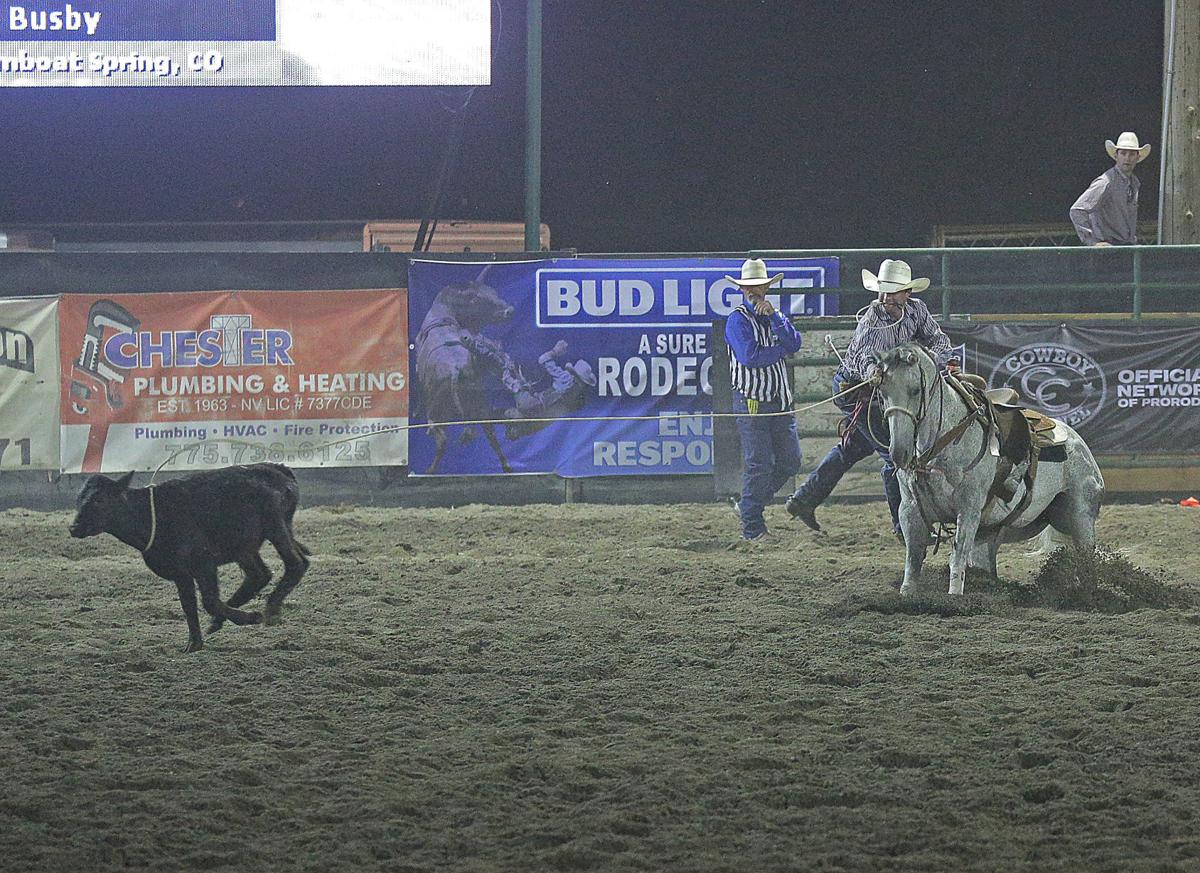 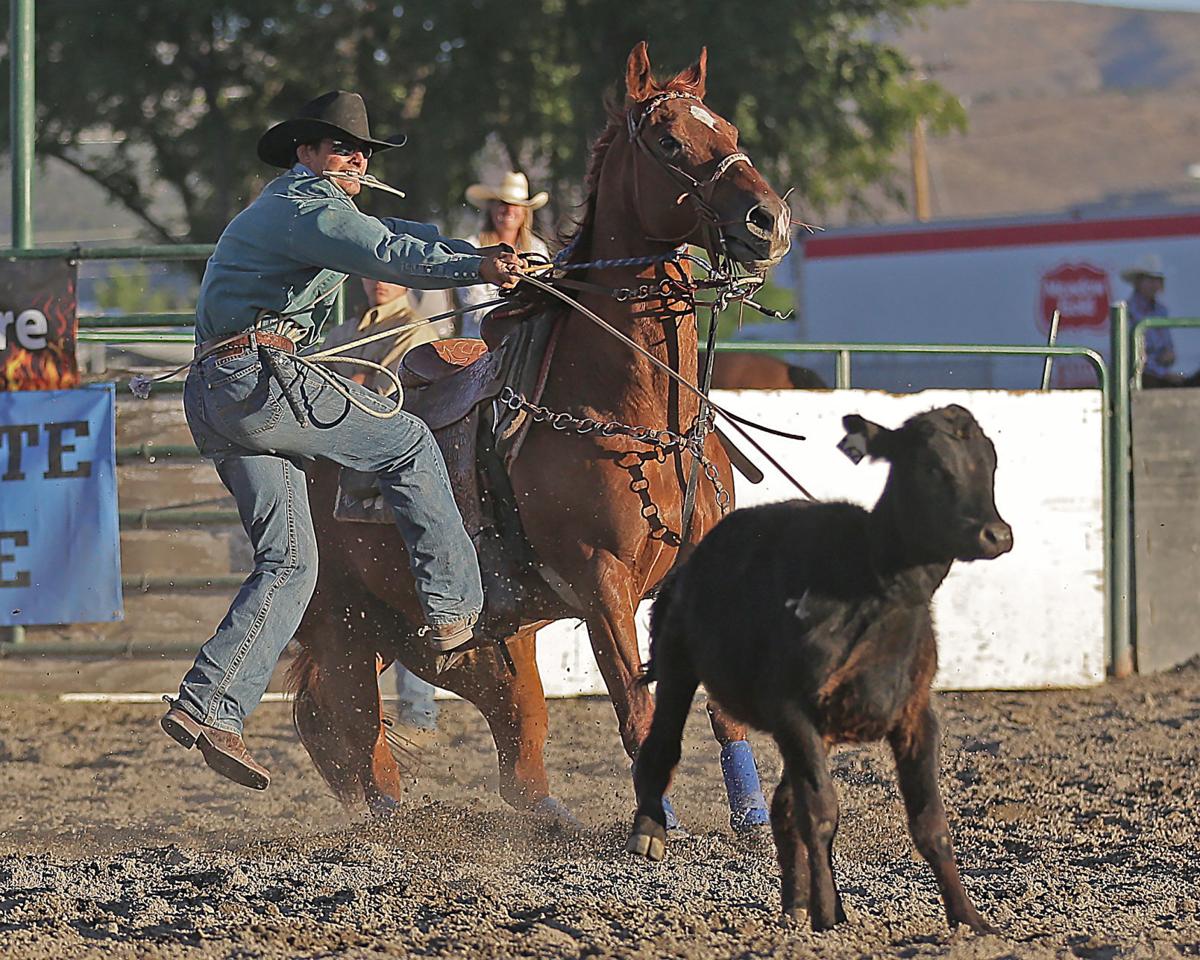 Tyler Forsberg ties the arena record of the Silver State Stampede with an 8.0-second run during the tie-down roping on Sunday, at Elko County Fairgrounds. Forsberg's time matched the 8.0 of Garrett Busby during the Friday performance. Each cowboy earned $2,623 and split the victory. 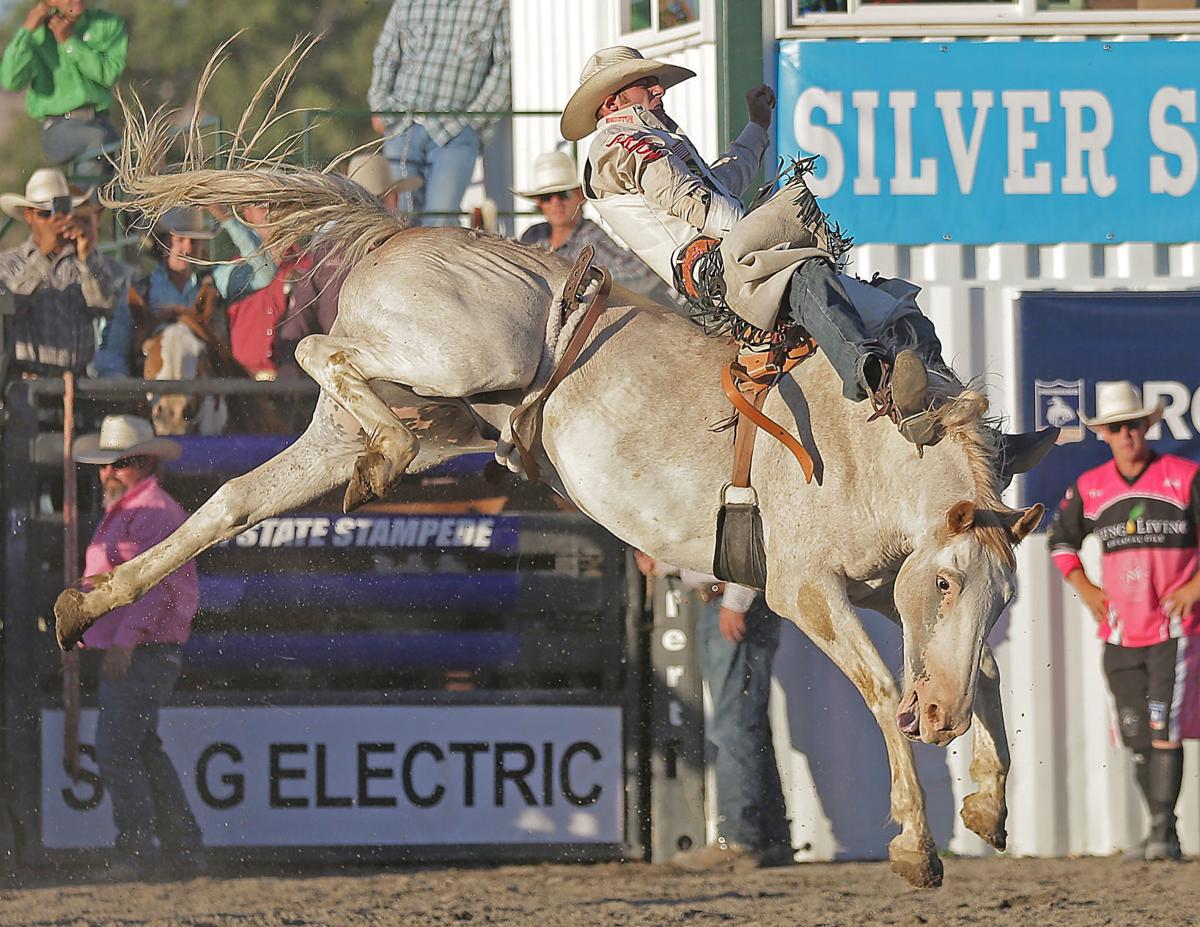 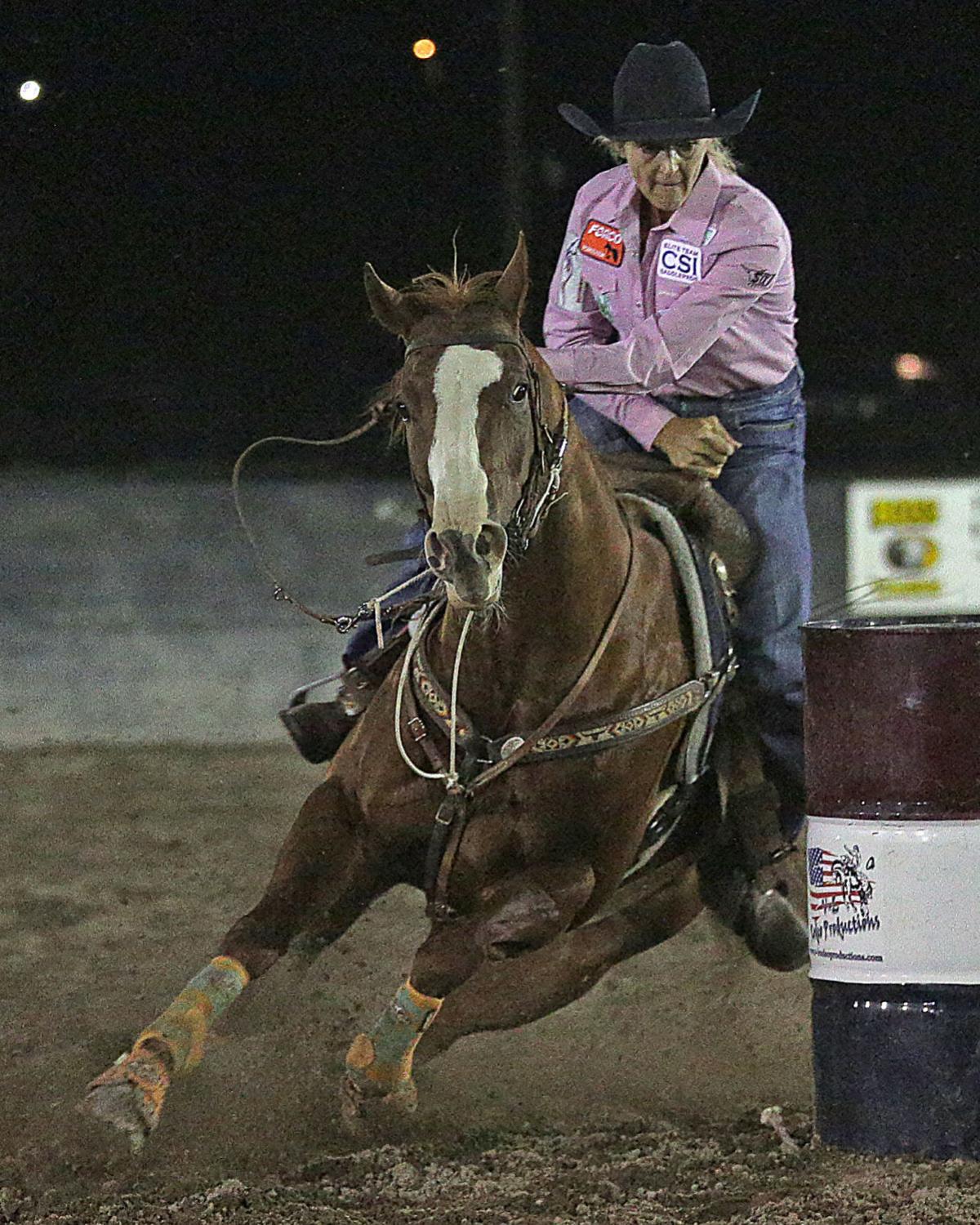 Tanya Jones turns the second barrel Saturday during the Silver State Stampede, at Elko County Fairgrounds. Jones' third barrel probably served as the difference in her winning the event by five-hundredths of a second. Clocking in at 16.15 seconds, Jones nailed down the win and claimed $2,356. 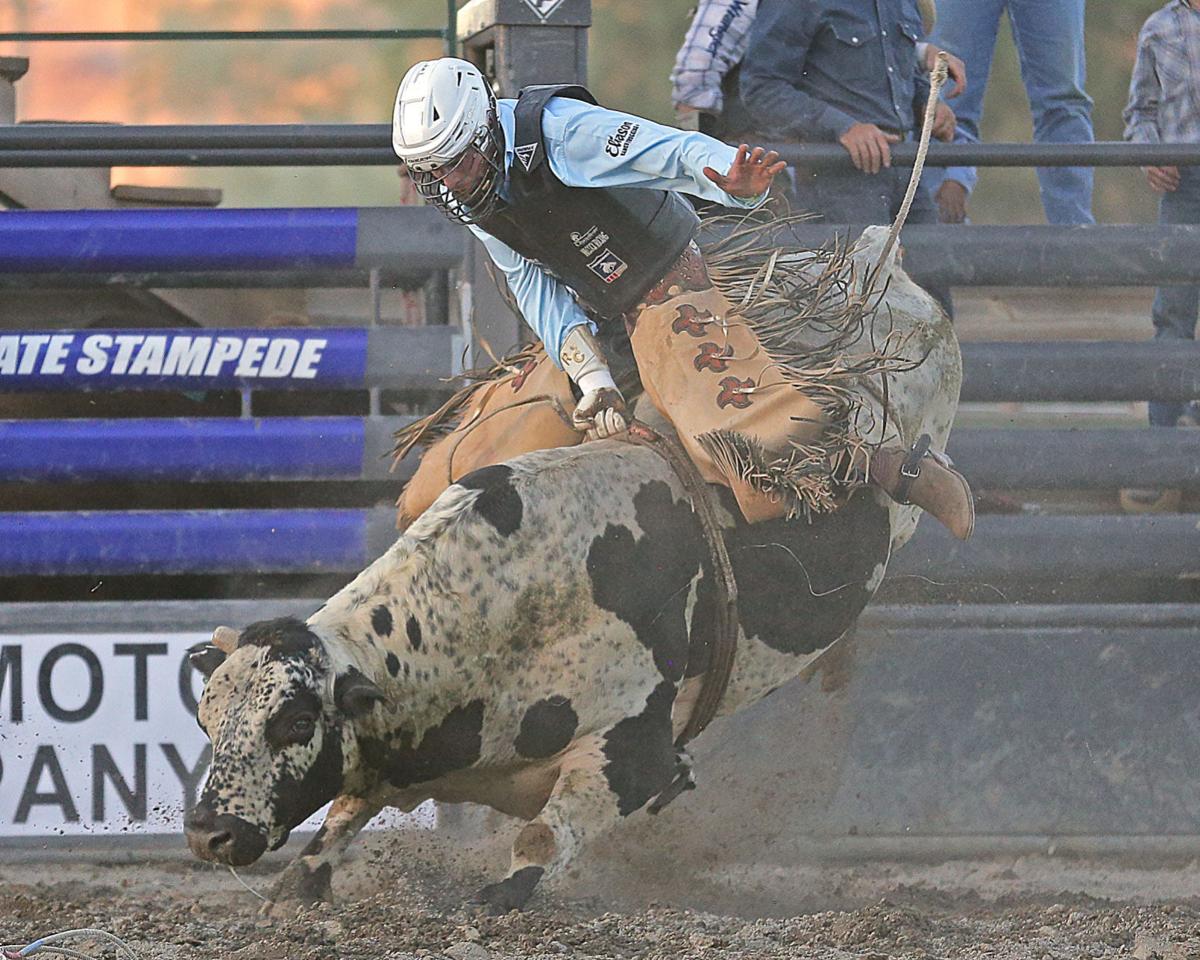 Riker Carter rides a Bar T Rodeo's "Diggit" away from his hand during the Sunday performance of the Silver State Stampede, at Elko County Fairgrounds. Carter won the event with a score of 85 points for $3,638 for the largest check given at the rodeo. 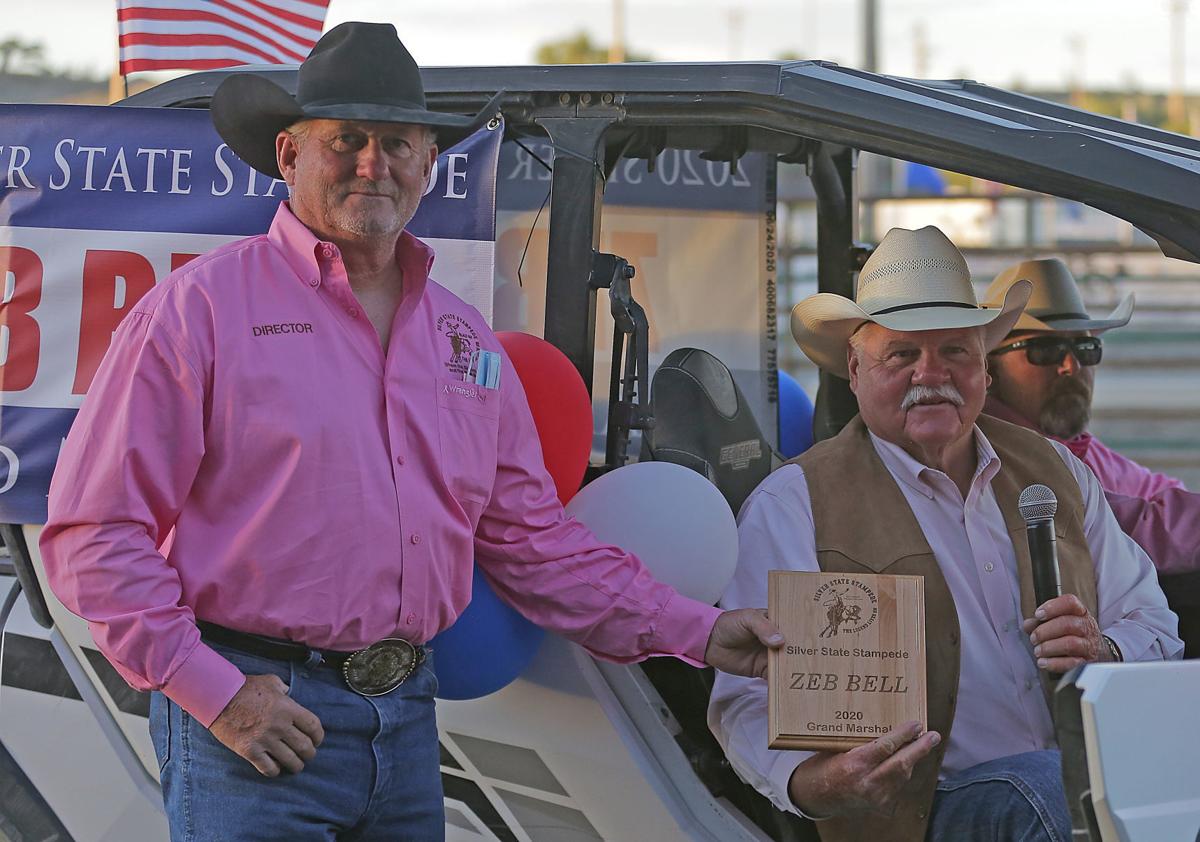 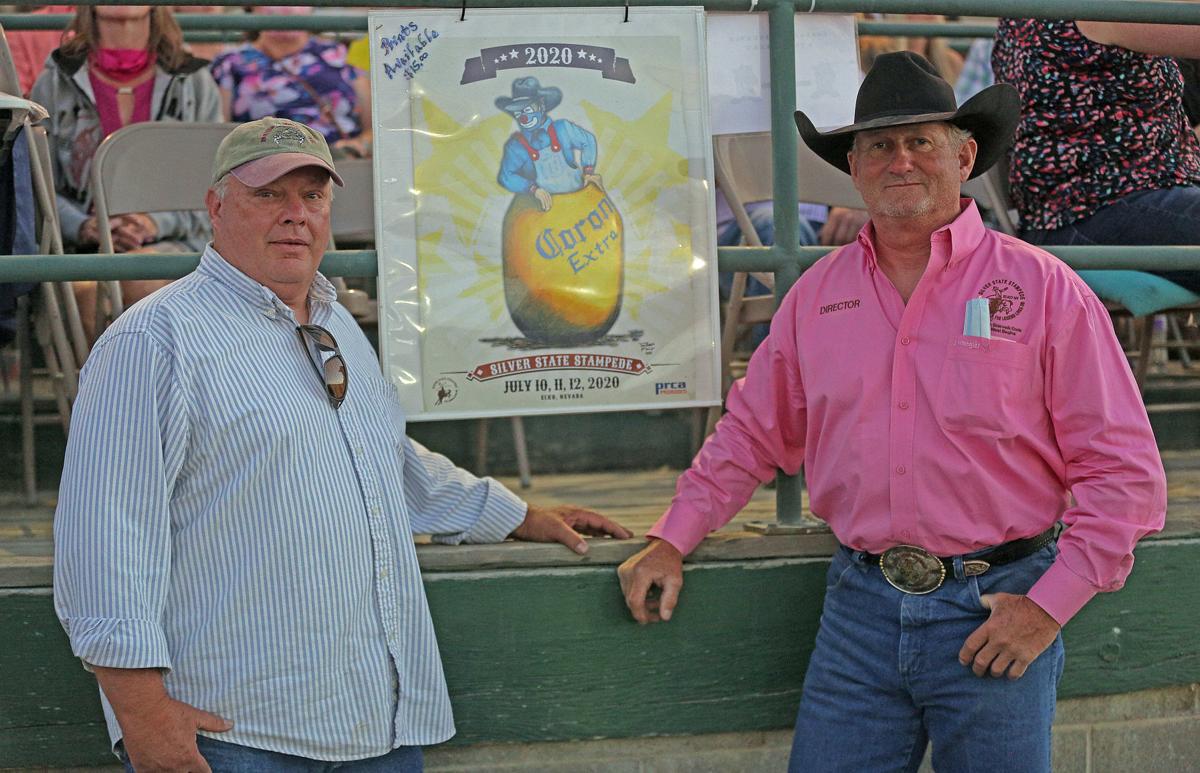