ELKO – The time has come; the stock will be loaded.

Now, all that’s left to do after a year of anticipation is to nod your face and the release the beasts.

The Silver State Stampede will kick off at 6 p.m. Friday with mutton busting, followed by the performance of the Professional Rodeo Cowboys Association at 7 p.m.

Here’s a look at what and who to watch in the first of three PRCA perfs.

Following the grand entry and the presentation of the flags, the action will pick up quickly with the first set of Old West Bronc riders.

The PRCA portion of the Stampede will get underway with the steer wrestling as the first event — the first name on the day sheet sure to bring a chorus of locals cheers.

Battle Mountain’s Hank Filippini will be the first bull dogger of the Stampede.

Between April 19 and 21, Filippini earned $1,739 for a round-winning tie with Elko’s Dakota Eldridge on matching 5.4-second runs.

During the Dixie National Rodeo, from February 7-13, Filippini made his fastest run of the season — sharing fourth place with two-time and defending world champion Tyler Waguespack — throwing one down in 3.7 seconds for $764.

He will compete Friday morning during the slack of the Dinosaur Roundup Rodeo, in Vernal, Utah, quickly loading up and making the trek back to Elko.

He is scheduled to be the only man out the chutes Friday night, awaiting a matchup with Bar T Rodeo’s “Clamity Springs.”

The horse has only bucked out once, CSI teammate Bronc Marriott scoring 74 points on the horse on May 10 during the Las Vegas Helldorado Days, the horse accounting half of the total — the judges awarding Clamity Springs 18.5 points on each side and Marriott given 18 on one side and 19 on the other.

A former winner of the Stampede, header Clay Berry, of Plymouth, Utah, — who claimed the 2014 Stampede team roping title with partner Britt Newman — is set to stick bones for another heeler, firing from the box Friday with Wellsville, Utah’s Brad Freeland.

The biggest influx of local talent will take place in the classic event of rodeo.

Winnemucca’s Shaun Mentaberry has drawn Bar T’s “Scarlett,” which has bucked off one of its two cowboys in the 2019 season.

In two trips during the Pony Express Rodeo, in Eagle Mountain, Utah, the lone score aboard the animal was 59 points by Chase Bennett — the horse marking 32 and Bennett finishing with 27 — Scarlett racking up 38 points in a buck-off of Austin Amick.

Paper Clip has shown to be a jump-kicker in two trips during the ’19 season — a horse that is rider friendly — averaging 34.75 points per outing for an average ride score of 75 points.

For Friday, Stremler has drawn Bar T’s “Continental,” a horse that has not been bucked at a PRCA rodeo since 2017, providing an intriguing matchup.

Also scheduled to ride will be two cowboys who are currently ranked in the top-50 of the world standings.

Tygh Valley, Oregon’s Johnny Espeland has won $19,176 and is 41st in the PRCA standings — drawing up with Bar T’s “Oliver Twist.”

The horse has been bucked once this season, scoring 32 points — Morgan Wilde scoring 39 of his own — the horse-cowboy combo accounting for a 71-point ride.

Treyson Antonick, of Overton, Texas, is currently 46th in the world standings with $16,030 in winnings.

He has drawn Bar T’s “Bertha Boy” and could be in for a pile of points, if he can ride correctly — the horse averaging 38.6 points in five trips with one buck-off — the average ride currently set at 74 points, the cowboys accounting for only 35.4 of the points.

He played a part in the 2018 NFR as well, loaning his horse “Greta” to Chubbock, Idaho’s Matt Shiozawa — an 11-time NFR calf roper — for several of the rounds.

Marsing, Idaho’s Megan McLeod-Sprague — who has always seemed to do well in the barrel racing in Reno — turned in another stellar performance during the Wildest, Richest Rodeo in the West.

McLeod-Sprague finished third in the average with a three-run time of 51.85 seconds and gained another $3,548.

In total, she hauled home $7,788 from Reno and will test her luck on the ground Friday in Elko.

Fallon’s Billy and Levi Quillan are slated to board their bulls during the Friday performance.

Billy Quillan has made the whistle twice in 10 tries and should climb on the back of Bar T’s “Water Head.”

Levi Quillan is still looking for his first-qualified ride of the season after seven no-scores.

His hunt for his first score of the year will not be easy on Bar T’s “Spicy Pickle.”

The bull has yet to be ridden in four trips this season, the bull racking up an average tally of 40.75 points by himself.

Tickets for the Stampede will be sold at the gate but are also available at several local stores, including J.M. Capriola Co., Boot Barn, IFA, Roy’s Market and the Elko Area Chamber of Commerce.

A family package — two adults and two children — is available for $35.

Stampede is back for 3 days of PRCA action

RENO — He’s not from Nevada, but he has family ties among the rodeo elite. 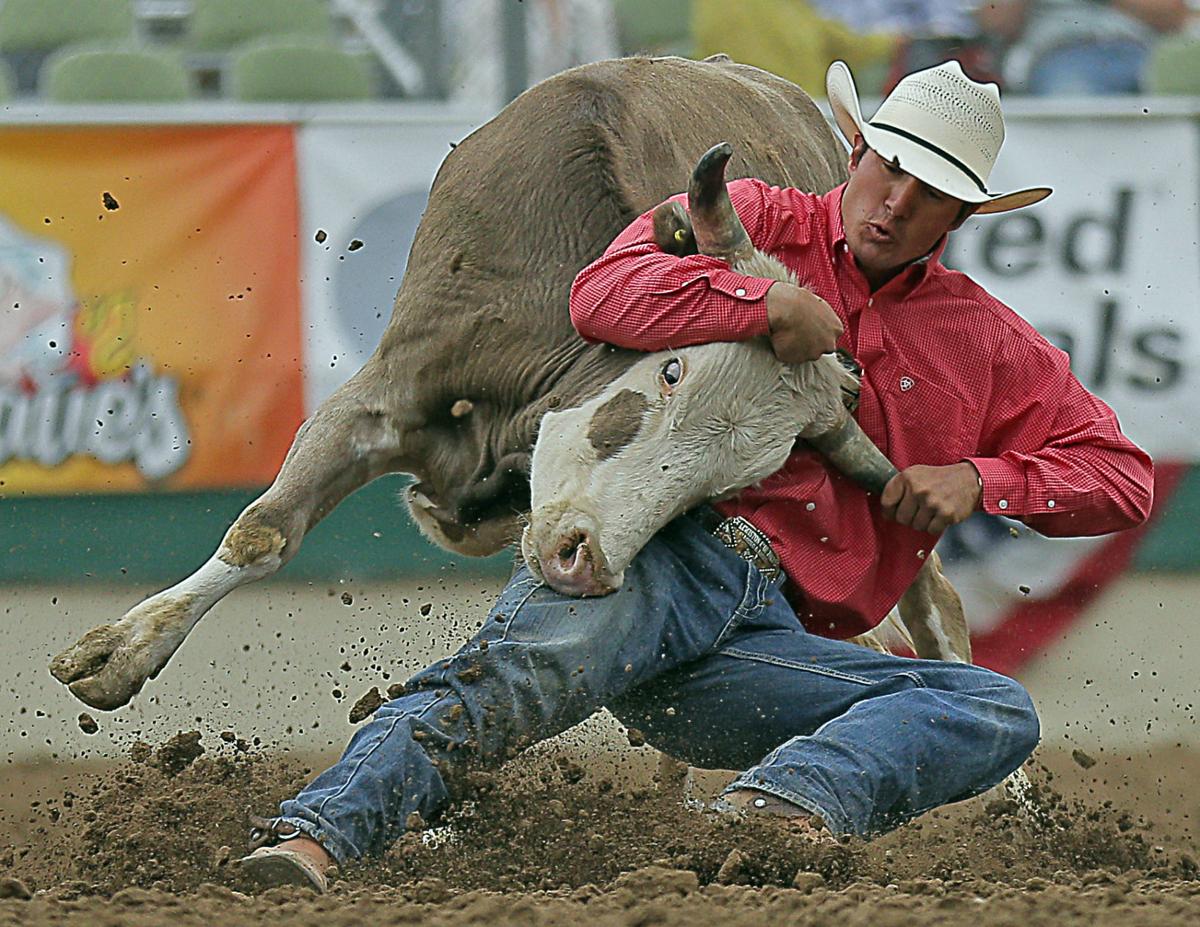 Battle Mountain's Hank Filippini slides his first steer on June 28 during the Reno Rodeo. Filippini will be the first PRCA competitor of the Silver State Stampede, which gets underway with the mutton busting at 6 p.m. Friday at the Elko County Fairgrounds. 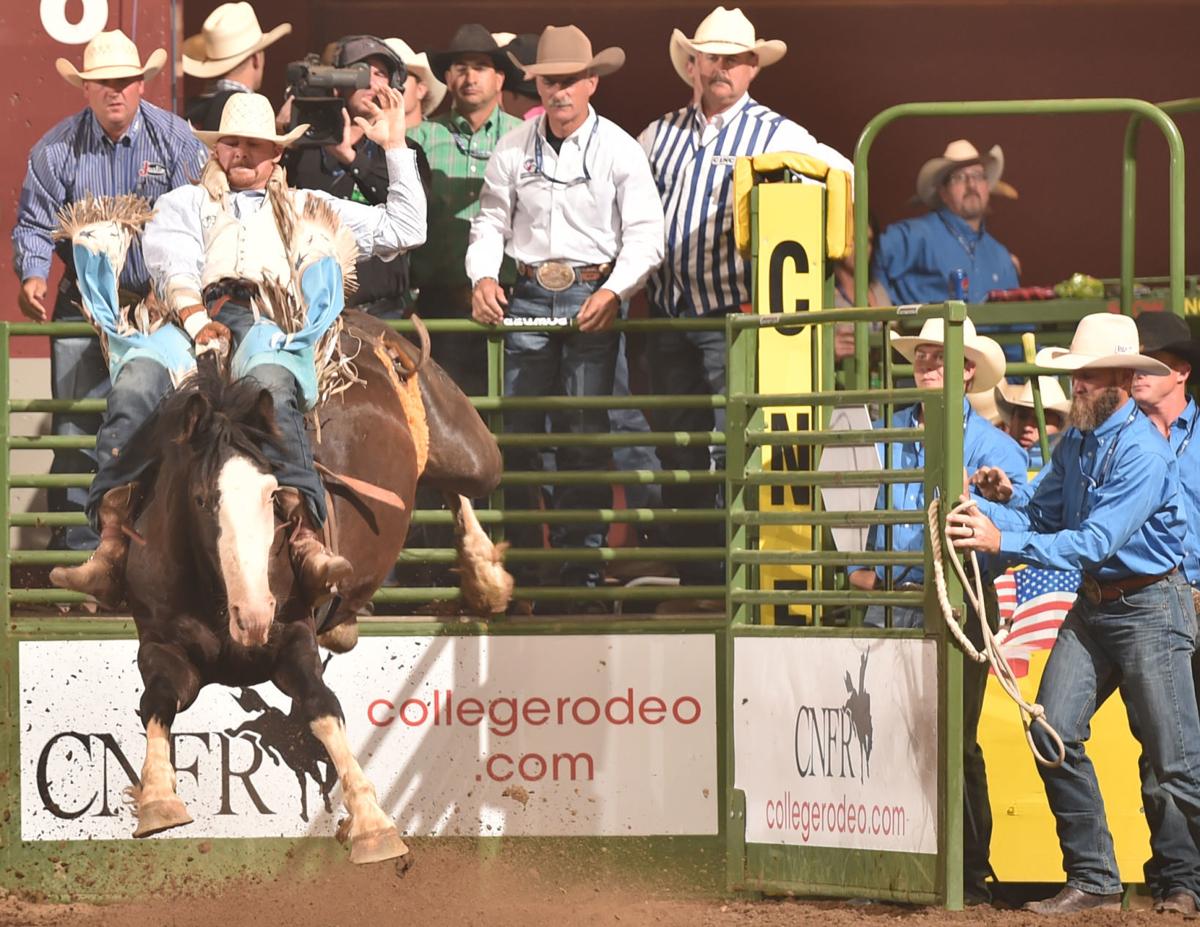 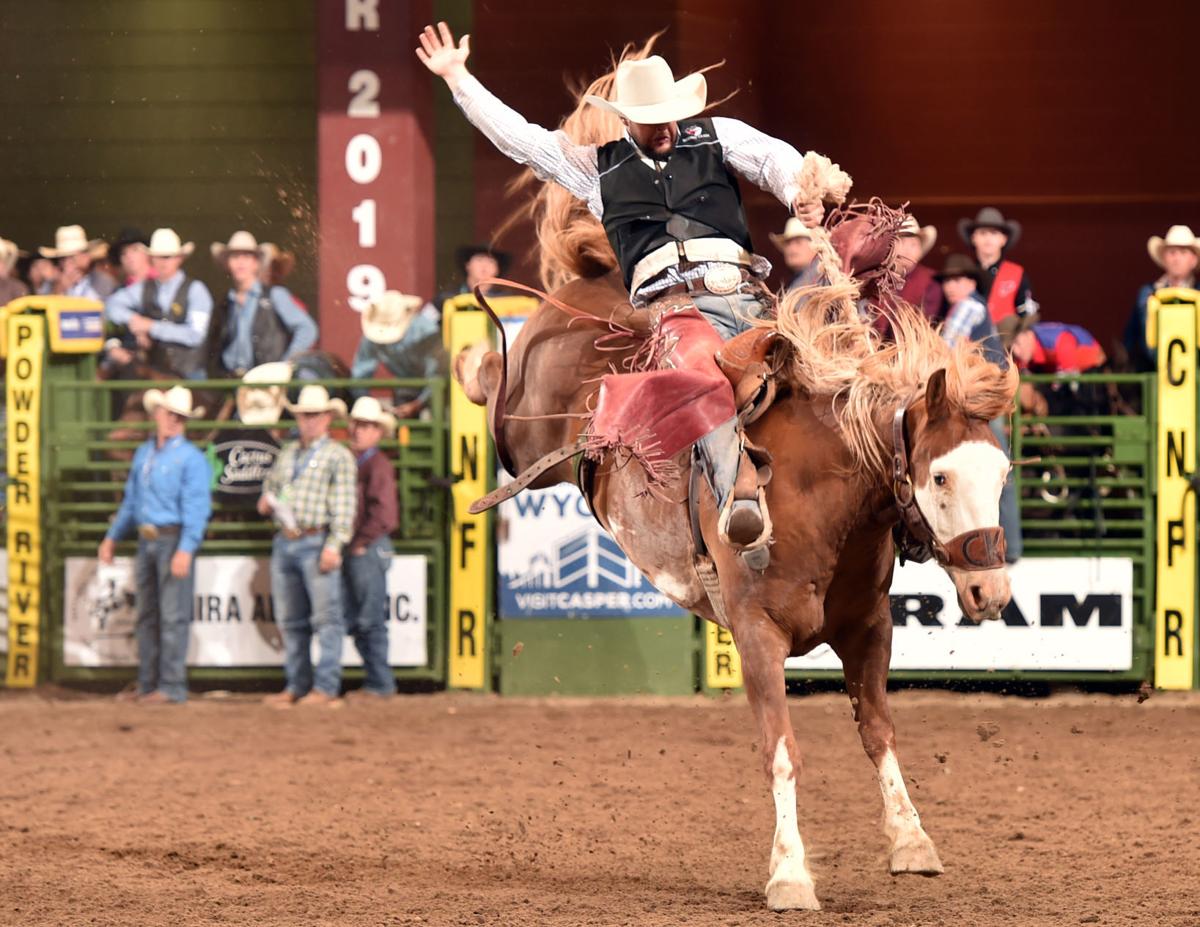 Shaun Mentaberry makes a 58.5-point saddle bronc ride on July 11 during the College National Finals Rodeo, in Casper, Wyoming. He placed 21st with a score of 63.5 points on his first ride and rounded out the top-20 average with a two-round total of 122 points. Mentaberry will climb on his bronc Friday during the Silver State Stampede. 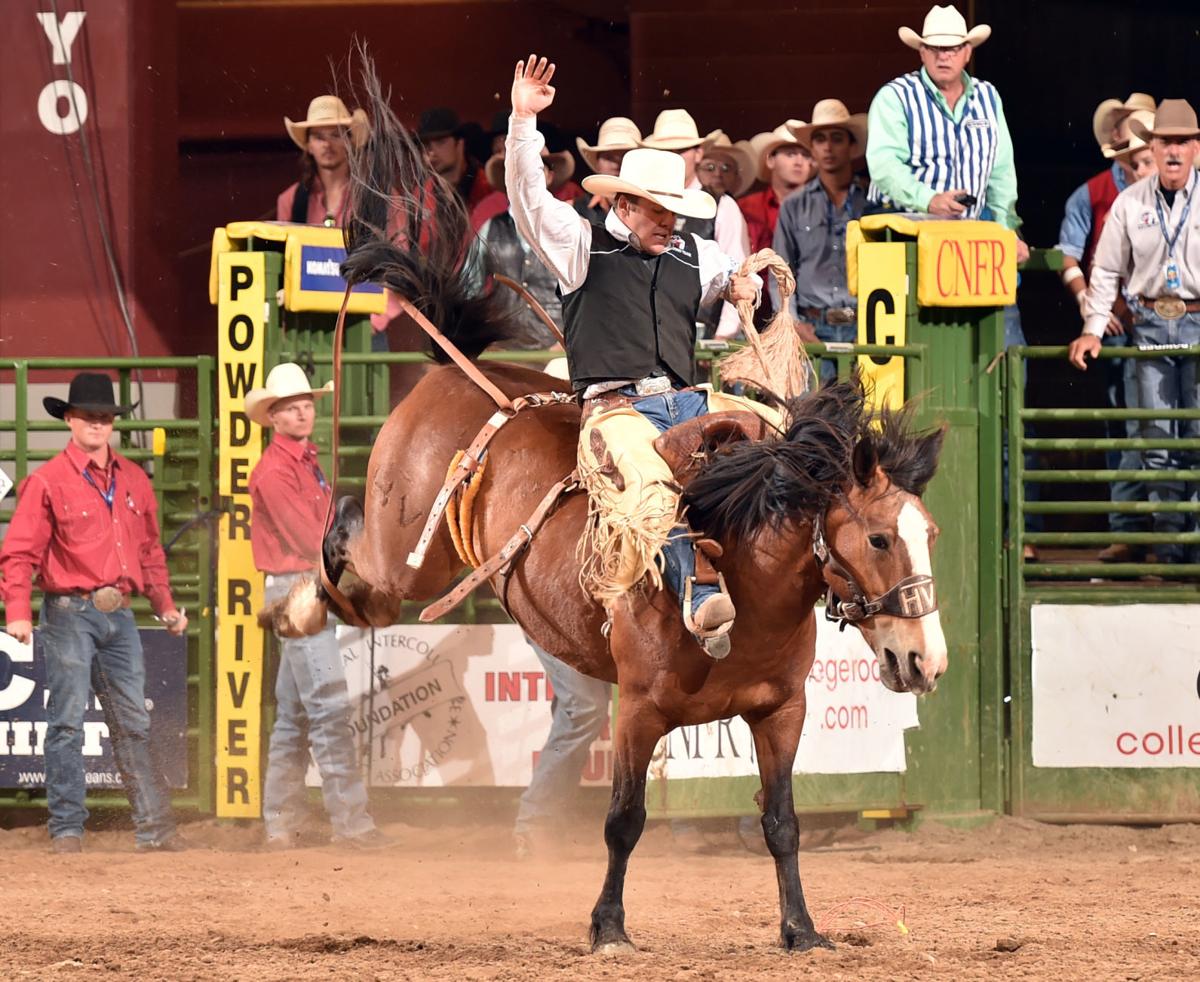 Luke Logan scores 69 points on June 9 during his first saddle bronc ride of the College National Finals Rodeo, in Casper, Wyoming. He will mount up Friday during the Silver State Stampede. 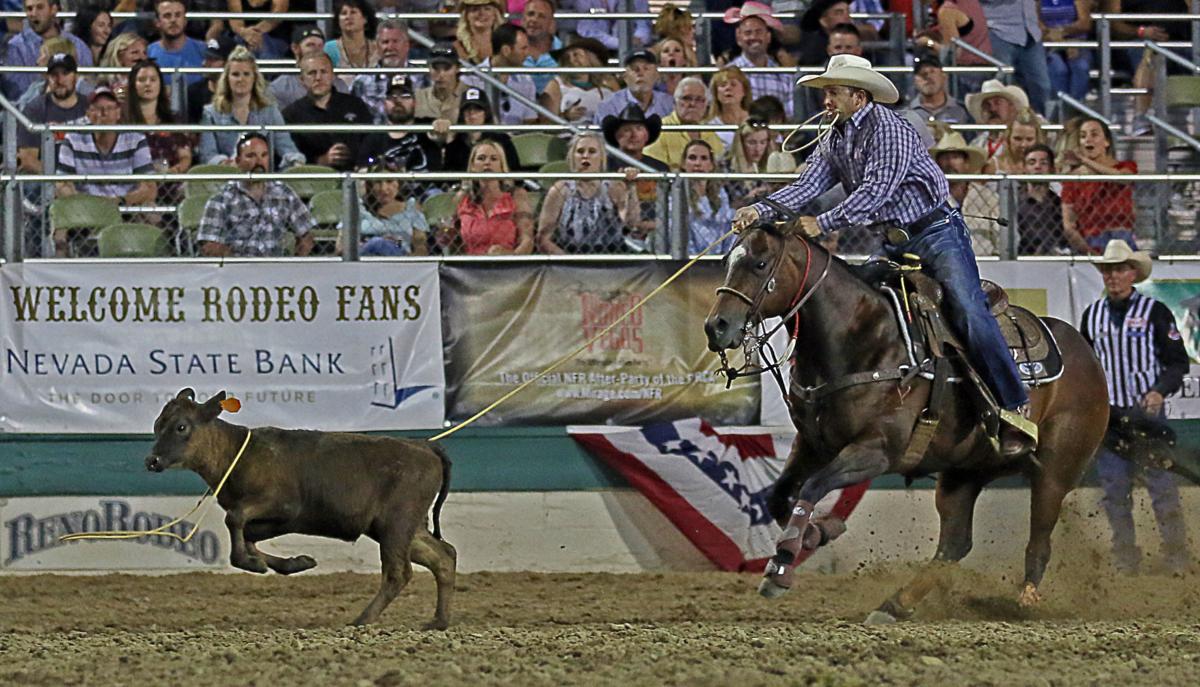 Jake Hannum, a 2007 NFR qualifier, ropes his third and final calf on June 23, 2018, during the short-go of the Reno Rodeo. He tied for the round win with a time of 8.6 seconds and placed sixth in the average. Hannum will rope Friday night during the Silver State Stampede. 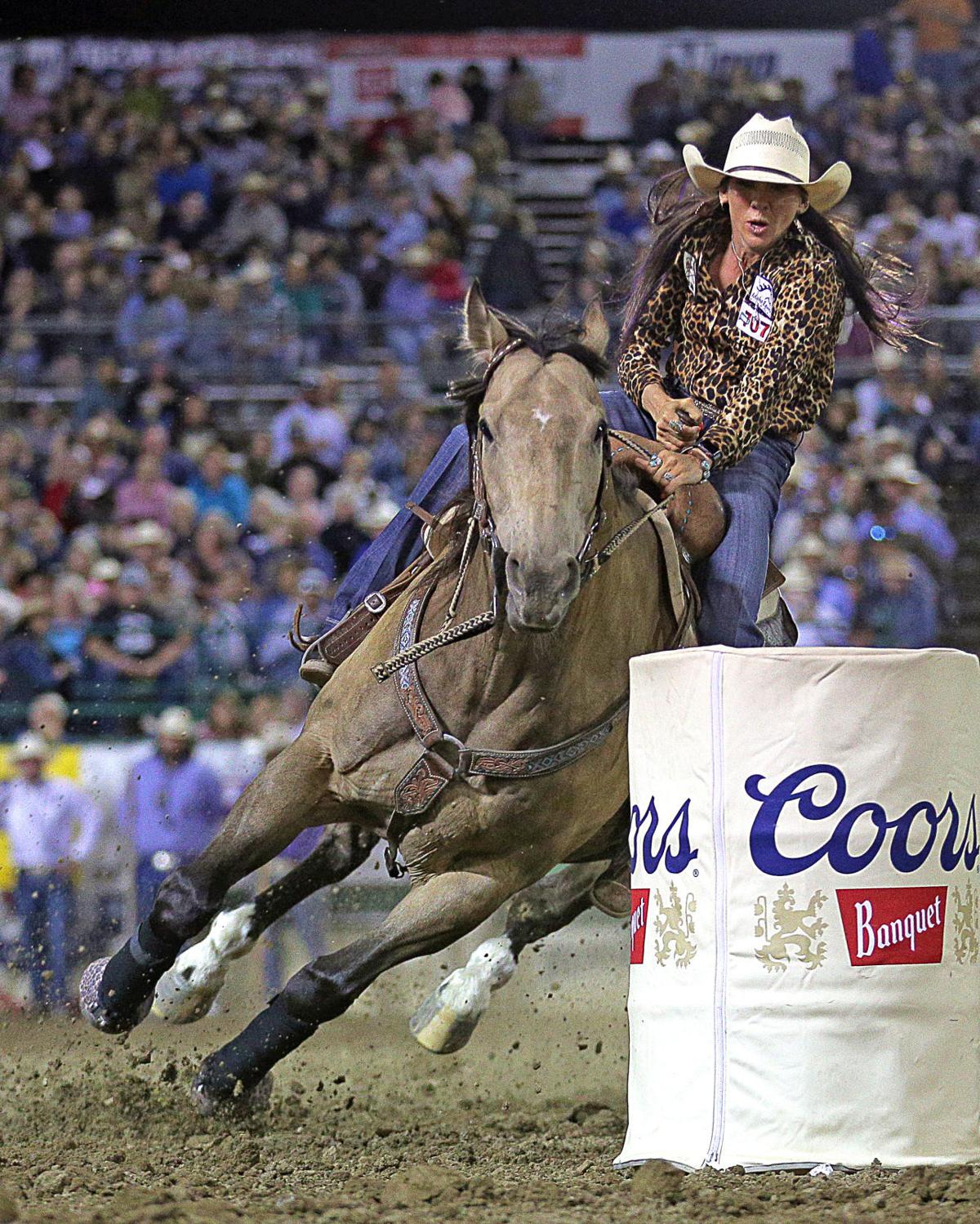 Megan McLeod-Sprague enters the second barrel June 29 during the short-go of the Reno Rodeo. She placed on each of her three runs and won third in the average, winning $7,788 in Reno. She will compete Friday during the Silver State Stampede.