ELKO — The second performance of the Silver State Stampede has plenty of possibilities for high scores and fast times, the talented field possessing the potential to climb the leaderboard.

The performance will kick off at 6 p.m. Saturday with the mutton busting, the PRCA portion of the event opening the chutes at 7 p.m.

Get to the Elko County Fairgrounds early, gates opening at 4 p.m. daily through Sunday.

Also, four cowboys without a WNFR under their belts are vying for their first trips — all currently ranked in the top-24 of the world standings — the first coming in the form of 21st-ranked Payden Hurst.

He will be followed by No. 24 Anthony Thomas and No. 20 Chad Rutherford.

The first man from the chute with back numbers to his credit is four-time WNFR qualifier Austin Foss, who will be followed immediately by seven-time qualifier and 2015 PRCA world champion and 2015 WNFR average winner Steven Peebles.

Elko’s Tony Barrington — who placed fourth at The American — will look to place his name in the top-50 of the world standings.

Back to another man who has dominated and is currently doing so again; Tim O’Connell.

After making six trips to the WNFR and winning three straight gold buckles and three-consecutive WNFR average saddles (2016-2018), O’Connell has overcome a serious injury and is pushing hard for his fourth world title — currently No. 1 in the PRCA standings.

Needing to move up two spots from 17th to 15th, Taylor Broussard searches for his second WNFR back number.

Closing the event, say hello to Minden cowboy Wyatt Denny — who went to the three-consecutive WNFRs from 2016 through 2018.

Bring on the beef, both with the bovine in the arena and the brawn of the men who are trying to slap steers down fast.

Stan Branco has one WNFR to his credit, but the appearance came clear back in 2013.

Tanner Brunner has made two trips to Sin City and is in a solid position for his third, currently ranking ninth in the world.

Another one-time WNFR (2019) dogger will make his bid for a second time in as many seasons, as Stetson Jorgensen dogs toward the end of the first-third of the event.

The stock for the older group bucks like big bulls.

During Saturday’s performance, there are a number of capable teams that are looking for a berth in the Wrangler Nationals Rodeo for the first time and a few who have been there already — including a 20-time cowboy.

The Utah team of Zane Barnson and Cole Wilson can shake up the top of the board; Wilson coming off a second-place finish at the Bob Feist Invitational with partner Pace Freed to the tune of $50,000 apiece.

Freed and Wilson roped their final steer in 8.35 and closed with a six-head average total of 46.96 seconds, missing out on first place and $75,000 each by eight-hundredths of a second as Kal Fuller and Reagan Ward posted a 6.04 in the short-go for a six-head time of 46.89 seconds.

From Valleyview, Alberta, Canada, header Clay Ullery has notched a stellar start to the season and is in seventh place — sticking for Tyce McCleod.

While Garett Chick has not made the WNFR on the front side, the guy on the back end has — a lot.

Walt Woodard, a true legend of the sport, brings his 20 WNFR appearances and two world titles to the Stampede — winning his first gold buckle in 1981 but not claiming his second until 2007 after a 26-year span.

Behind Chick and Woodard will be a team with half of its members possessing WNFR experience.

Tate Kirchenschlager made his first WFNR in 2019 — currently 18th in the standings — and he will hook bones for Ross Ashford, who is 31st in the feet-grabbing standings.

Toward the end of the event, meet a world champ.

Although Ponoka, Alberta, Canada’s Levi Simpson has qualified for just one WNFR — he made the trip count — he won the 2016 world championship and the 2016 WNFR average title with Jeremy Buhler.

On Saturday night, he will latch horns for two-time WNFR heeler Shay Carroll.

Following the conclusion of the steer wrestling, buckle up — grab the rope strap — as one of the fan-favorite events of the Stampede rolls on with the Old West Broncs.

Cowboys will ride saddle bronc horses in everyday-working saddles, the riders allowed to rope-up — ride as, ride can — the top-eight from Friday and Saturday’s long round making it back for a two-head average battle in the short-round at 5 p.m. Sunday.

Get on the edge of your seats.

Making his first appearance at the Stampede since 1998, the years have not knocked off all the antics and death-defying stunts of The Wild Child — so take in the Clown Act — as he defies gravity on his motorcycle.

The spurs of the cowboys in the bronc riding are sharp, quick and flashy — providing seven WNFR riders with a total of 48 WNFR back numbers, three gold buckles and five WNFR average wins.

Six-time WNFR qualifier Isaac Diaz will start the streak — currently ranking 15th in the standings for trip No. 7 — followed by Brody Cress, who has earned three straight trips to the WNFR and spurred his way to a pair of average crowns in 2017 and 2019.

As of now, he trails just one man in the world standings — Cress in second — behind Wyatt Casper, who has already nailed down $134,781.

Shorty Garrett currently ranks fourth in the PRCA standings as he attempts to book his first December berth in Vegas.

He will be followed by 2015 world champ Jacobs Crawley — who has also won two WNFR average titles (2013, 2015) and made nine-consecutive WNFRs — starting a brotherly string ahead of Sterling Crawley, who has reached the WNFR on six occasions.

Jacobs is currently seventh in the world, just two spots ahead of Sterling in ninth.

Welcome two-time world champion Taos Muncy, who has reached 10 WNFRs and topped the field in 2007 and 2011.

Allen Boore’s lone trip to the WNFR came in 2016, searching for his return to the Super Bowl of rodeo, off to a hot start and currently fifth in the world standings.

Cajun flavor, ‘Hot-Sauce’ Cody DeMoss — a 13-time WNFR qualifier — has nailed down a 2012 WNFR average win but is still looking for the elusive gold buckle.

Watch the video board and the times during the tie-down roping, as the lead could change hands a number of times.

Currently 18th in the world standings, Ike Fontenot will be followed by Caddo Lewallen — each pushing for their first WNFR qualifications — Lewallen all the way up the third in the PRCA standings.

In 2019, Tyler Milligan booked his first back number — making a splash — winning Round 7 and splitting the win in Round 8, placing in six of 10 rounds at the WNFR.

He is currently fourth in the PRCA standings, just ahead of fifth-place Timber Moore — a six-time WNFR qualifier — who is looking for a return to Vegas after a two-year drought from a string of five-straight berths to the WNFR (2013-2017).

Stetson Vest is 24th in the world standings, attempting to make his second WNFR with his lone trip coming back in 2013.

Another one-time qualifier and 2016 Stampede champ, J.C. Malone, is eager for his second back number after qualifying for the 2017 WNFR.

After the tie-down roping, all fans — especially the kids — will love the exhibition of riding skills performed by the EhCapa Riders.

The crowd should marvel at one of the most-amazing talents, hardest-working, best-horsemanship hands of any generation.

Sherry Cervi, a 19-time WNFR veteran, still has what it takes to topple the newcomers, as she did in the 2016 Stampede.

Brittney Barnett and Megan Swint will each look to pad their cases for their first WNFR bids, Barnett currently 11th and Swint ranking 26th, respectively.

Little brother can ride, too.

Roscoe Jarboe — a three-time WNFR bull rider — is currently 22nd in the standings during his journey for his fourth appearance in Vegas.

While Jarboe looks for his fourth qualification, the guy who will ride behind his already has four back numbers — as Jordan Spears will spur for WNFR No. 5.

Elliot Jacoby has tallied a pair of WNFR qualifications in consecutive years, b but he has not been back since 2014.

What do you say, TJ?

TJ Gray has not been to a WNFR as a contestant, but he’s well on his way through this point in the season and is currently seventh in the world standings.

Bad enough to get in one of six circles and attempt to avoid a costly hospital trip that may be caused by a fighting bull?

The last person remaining in their circle takes home the prize money, the fans’ reactions and the bragging rights at the Cowboy Bar.

Speaking of the Cowboy Bar, the beverages will be served and a dance will take place during and after the conclusion of Saturday’s slack performance of the rodeo — which includes a world-renowned, hometown talent.

Eldridge jumped to second place in the PRCA standings with a second-place, $27,250 finish at The American.

After the rodeo reboot — due to COVID-19 — near the end of May, Eldridge has won just $1,463.52 following his big day at The American on March, at AT&T Stadium.

Stick around for the slack and give a champion a champion’s cheering from the hometown crowd.

In the event, Battle Mountain’s Hank Filippini will also compete.

During the team roping, Eldridge will head for travel partner Clayton Hass.

The slack will include steer wrestling, team roping and tie-down roping — the day sheet loaded with big names, WNFR qualifiers, world champions, WNFR average champs and a multitude of up-and-comers who figure to be the next generation of rodeo stars. 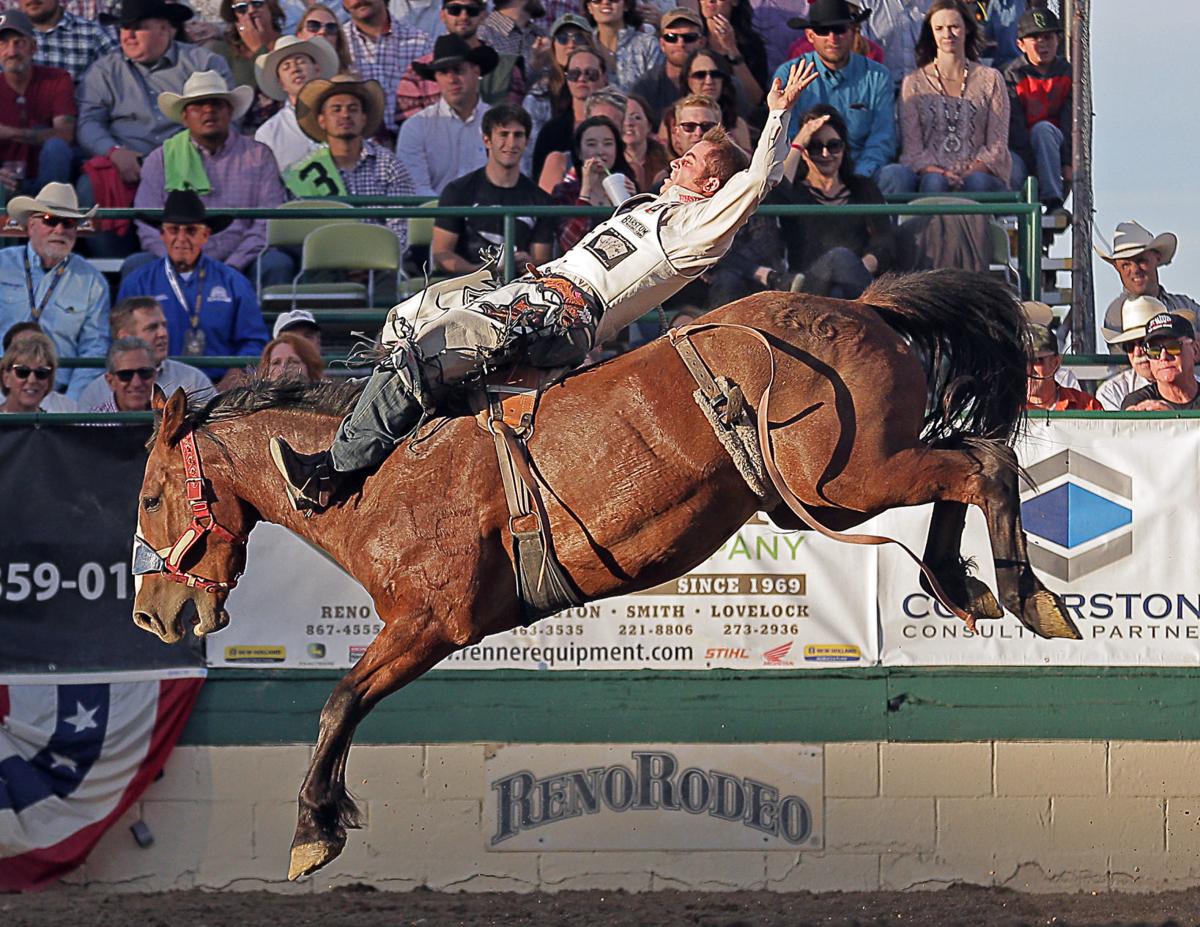 Austin Foss scores 82 points on June 29, 2019, during the short-go of the Reno Rodeo. He will ride Saturday night in the Silver State Stampede. 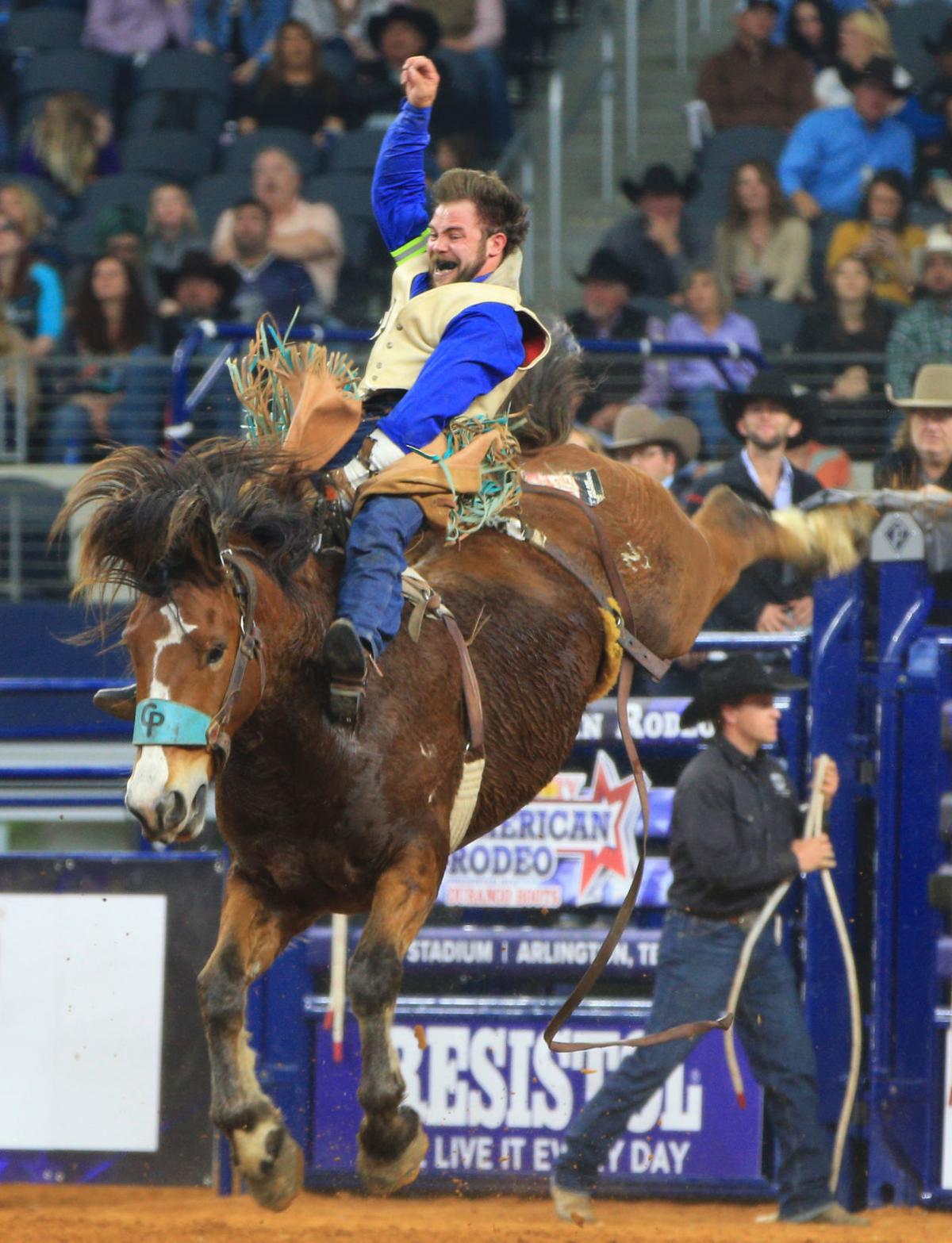 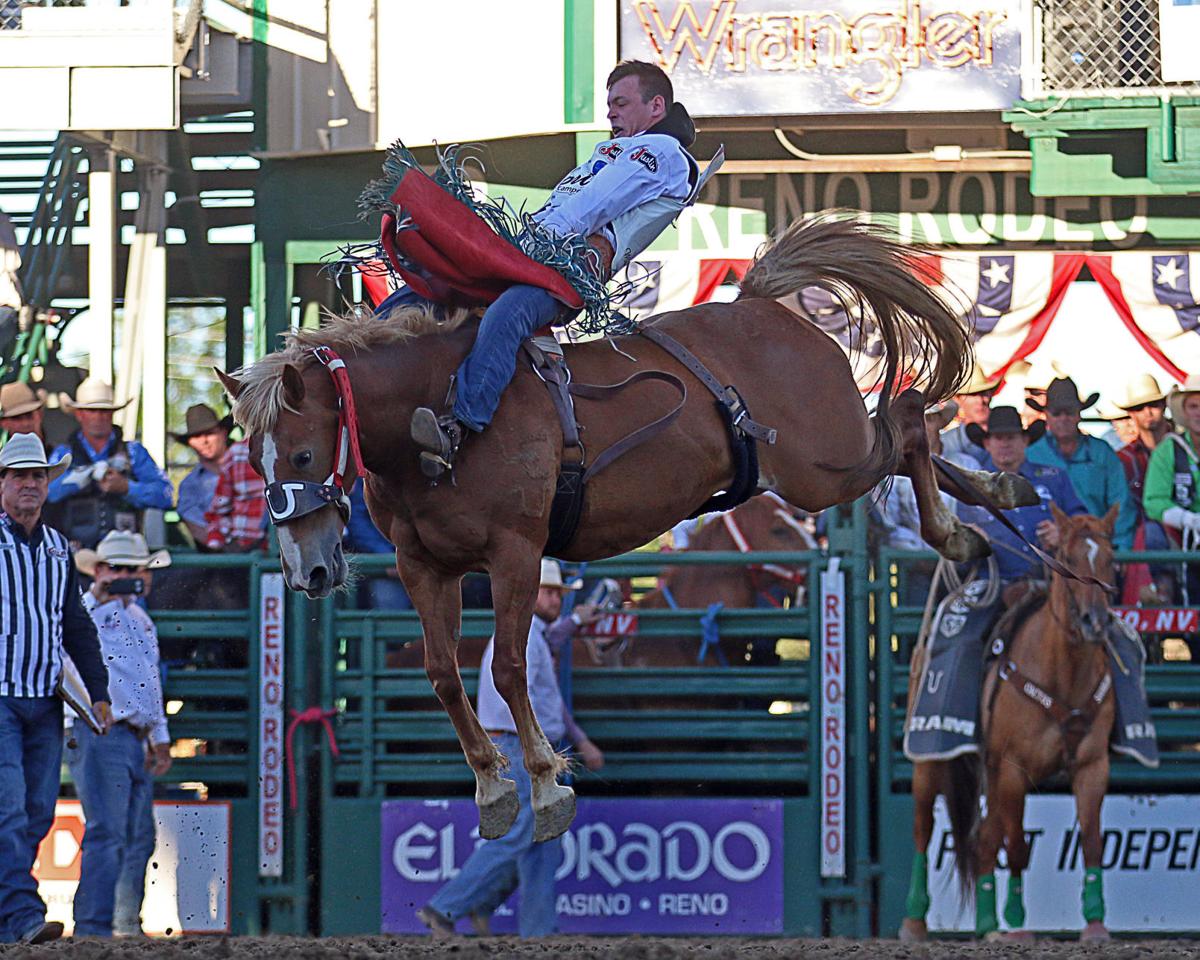 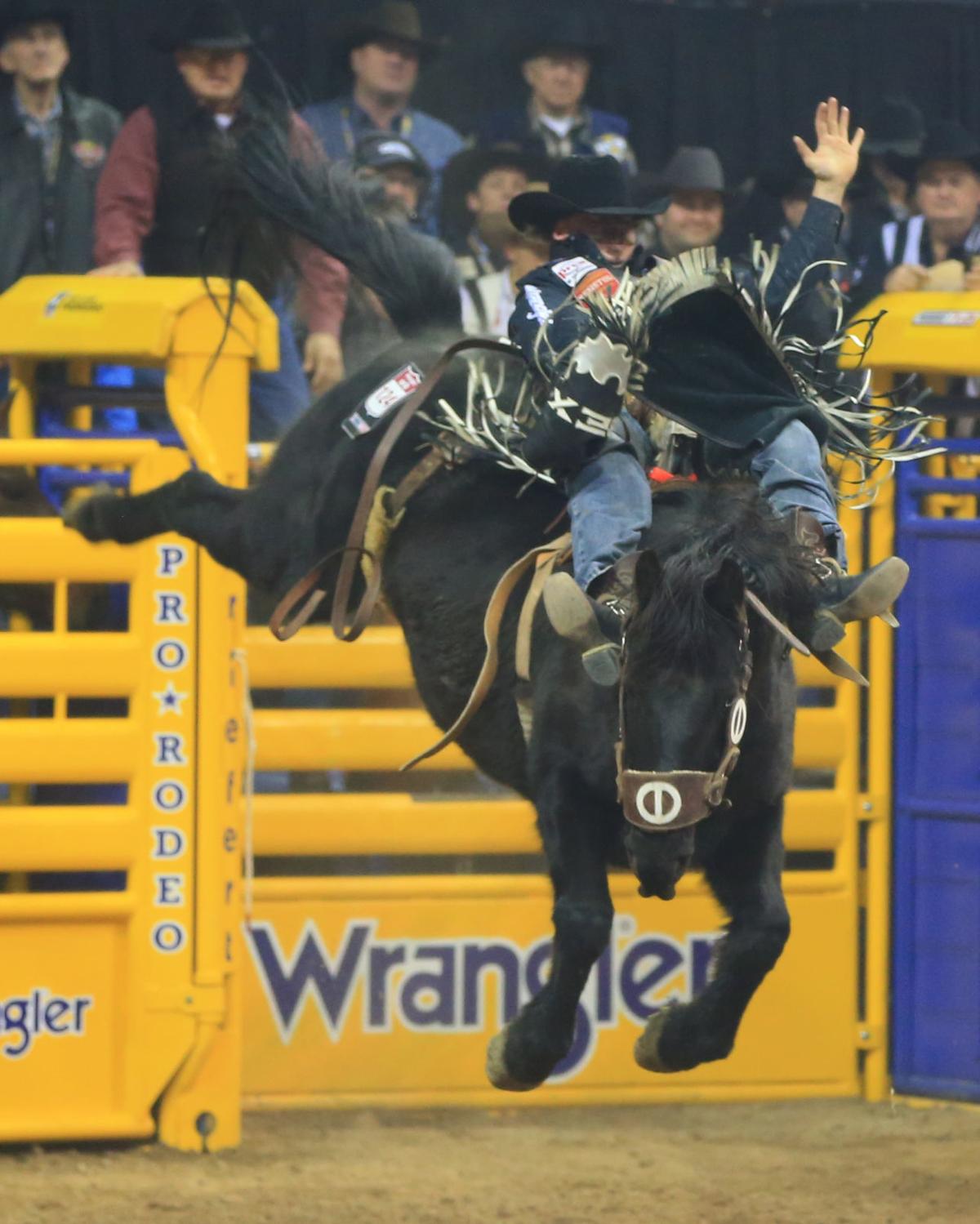 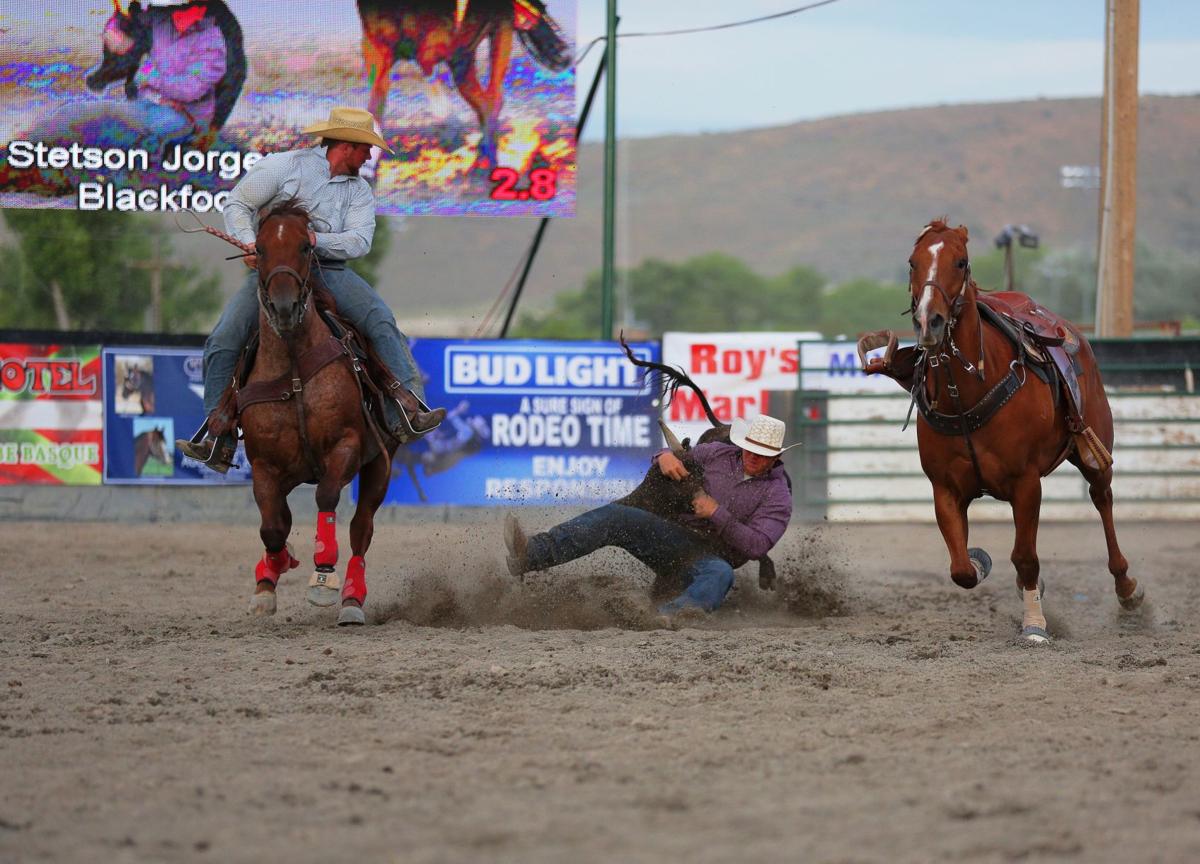 Stetson Jorgensen, of Blackfoot, Idaho, gets down on a steer in 2016 at Elko County Fairgrounds. He led the Silver State Stampede with a time of 4.8 seconds on the run. 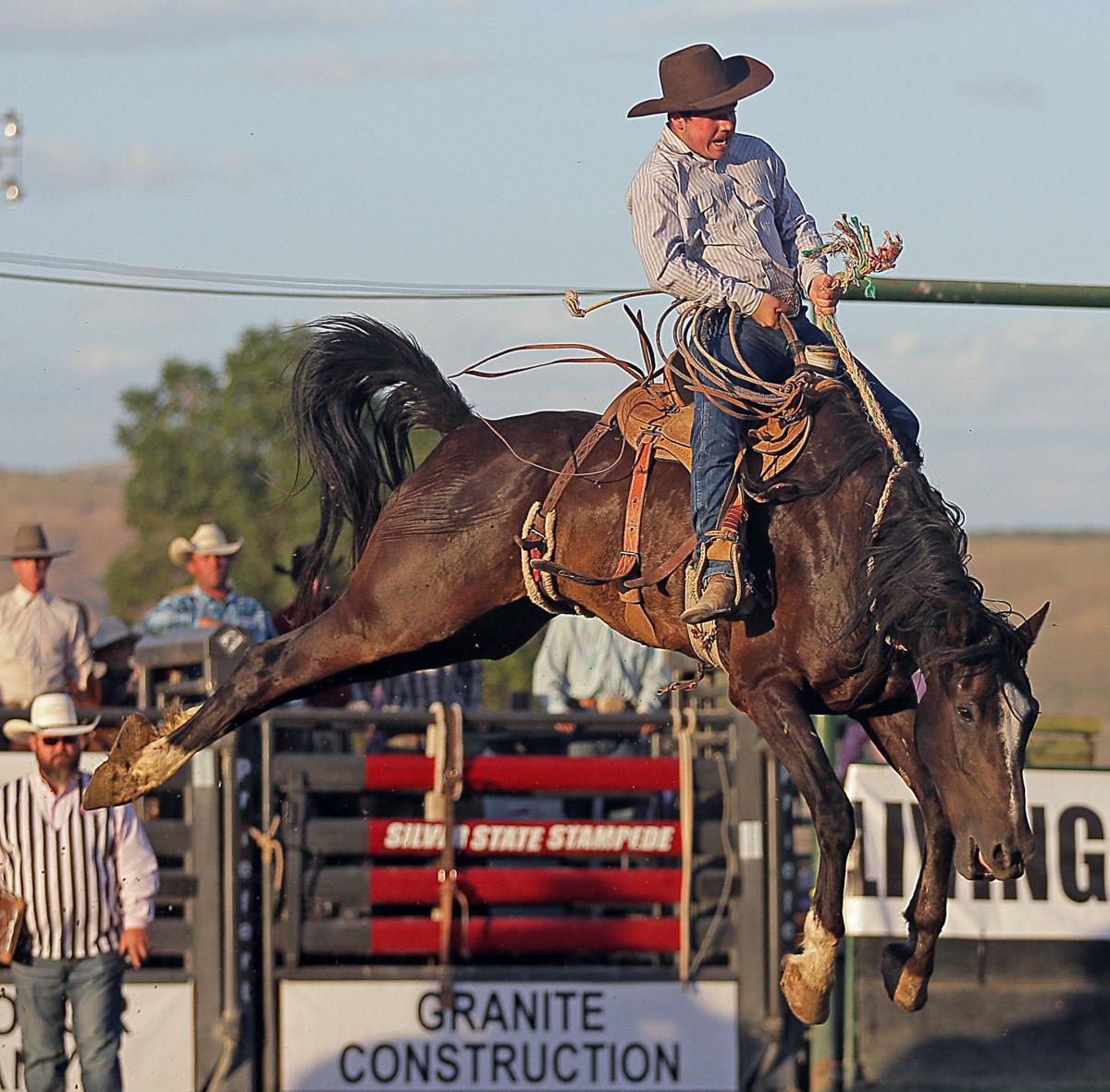 Travon Cowdell wins the first round of the 2019 Old West bronc riding with a score of 84 points. He earned $900 for the ride and finished second in the average with a two-horse total of 155 points, snagging another $1,012.50. 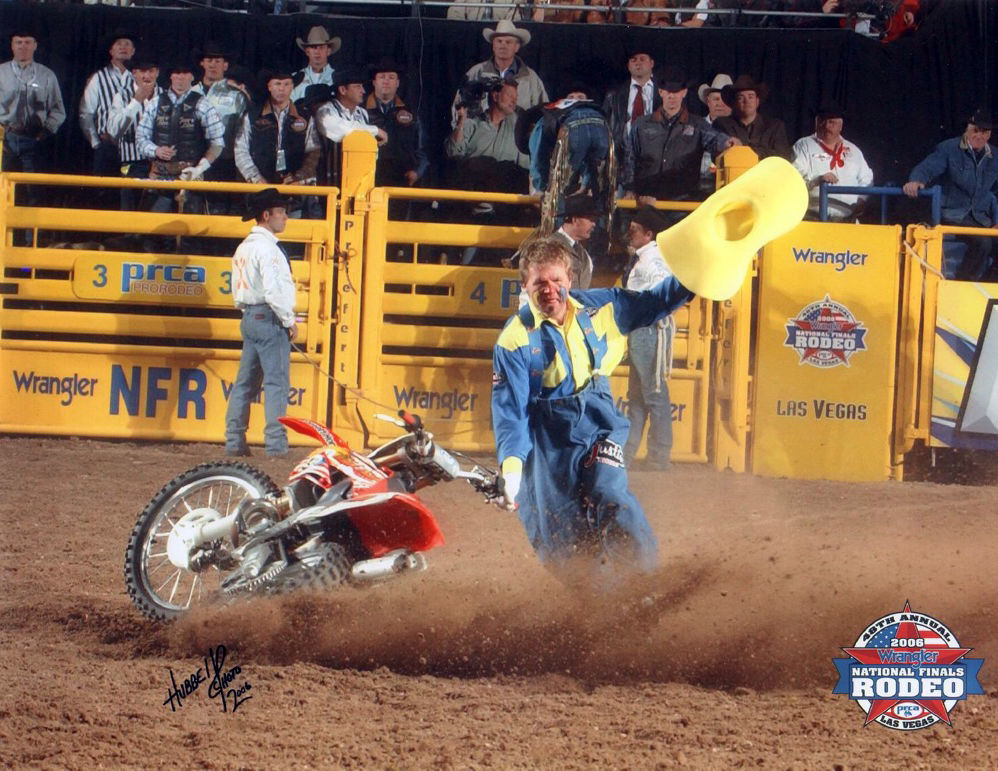 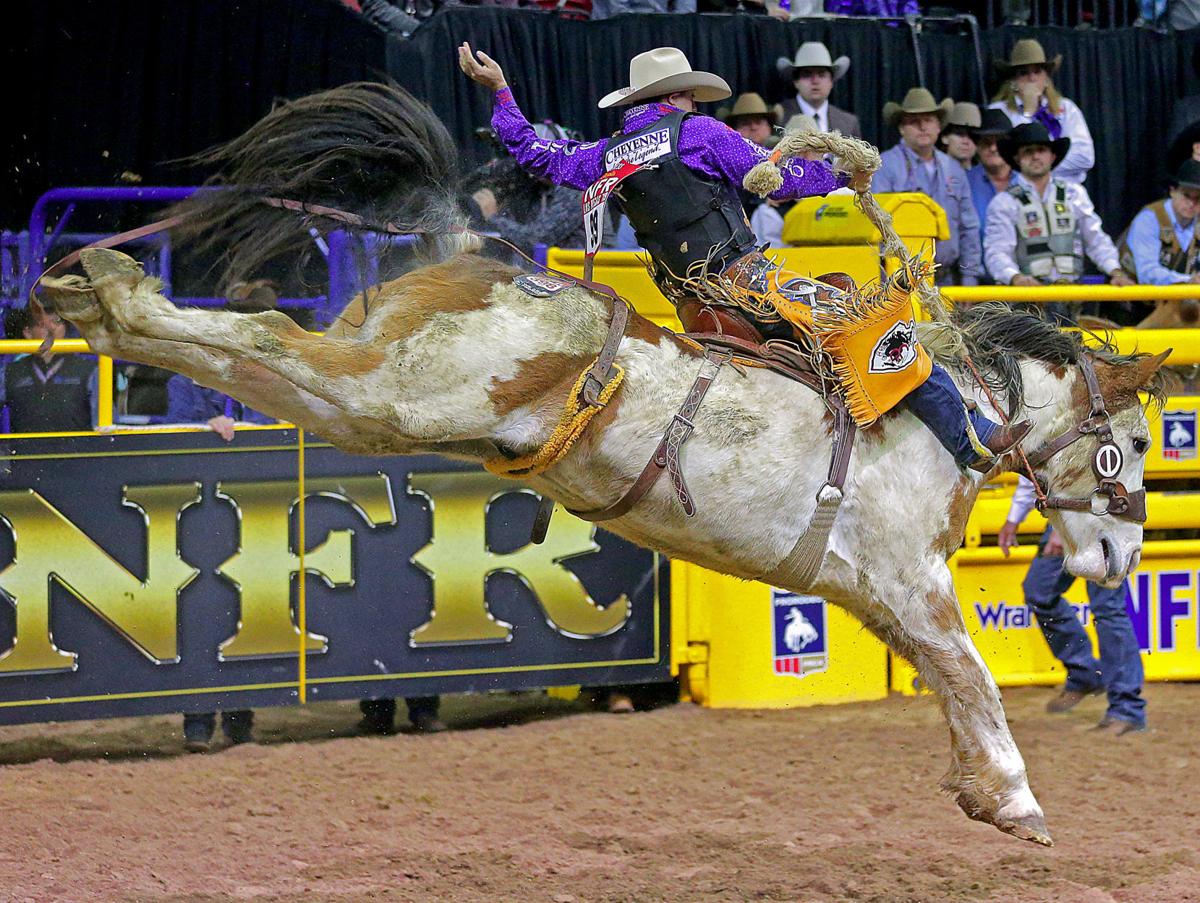 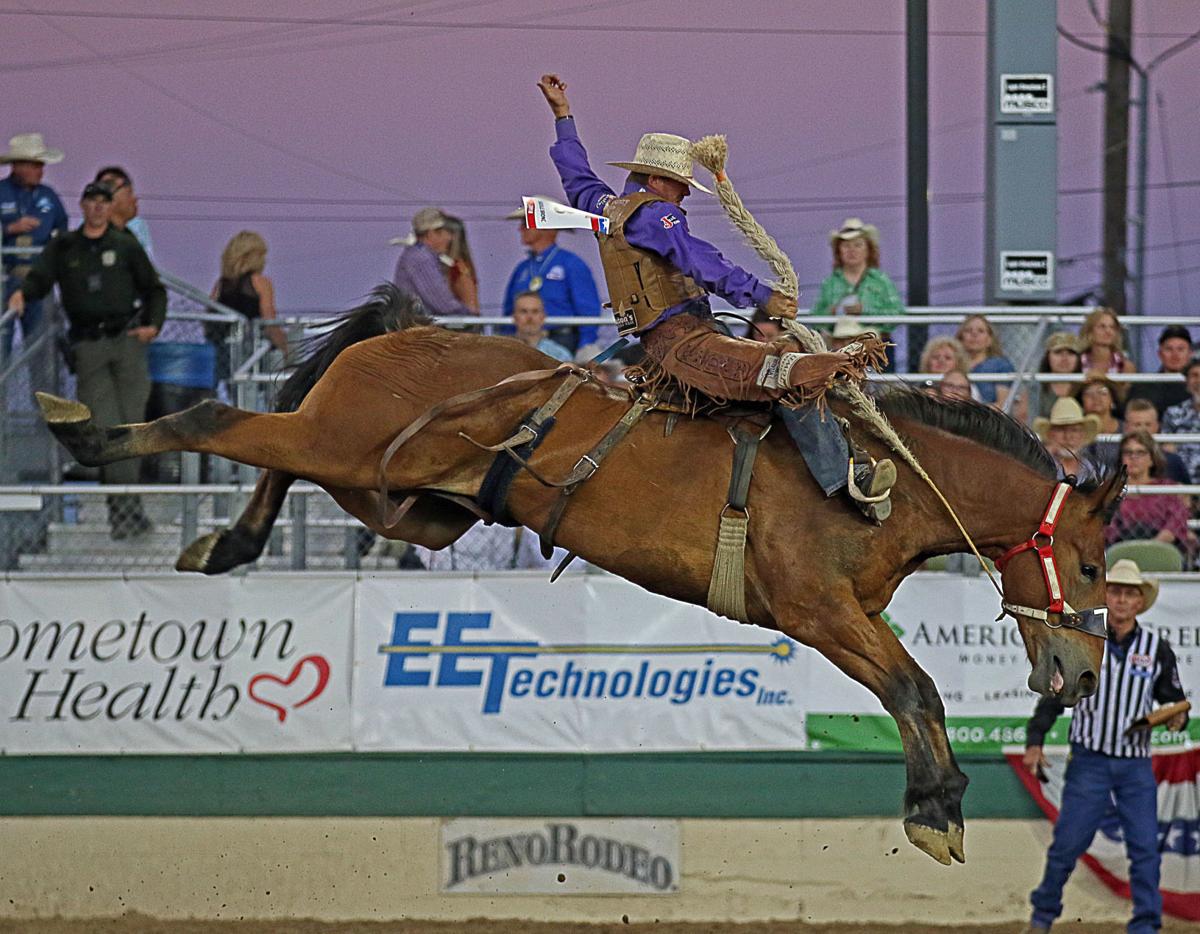 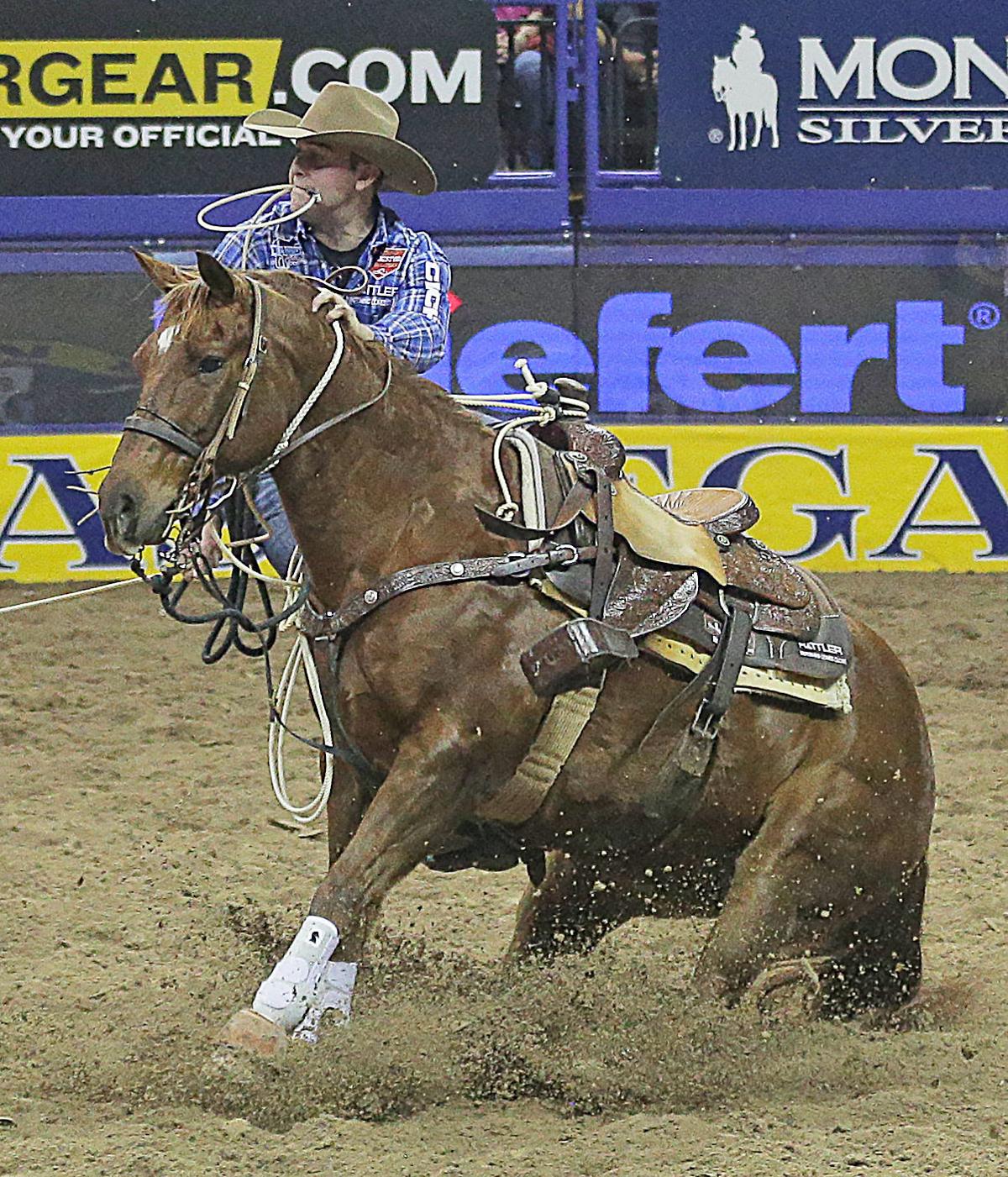 Tyler Milligan dismounts the American Quarter Horse Association PRCA Tie-Down Horse of the Year — Little Smart Leo "Big Time" — during the seventh round of the Wrangler National Finals Rodeo on Wednesday, Dec. 11, 2019, at Thomas & Mack Center, in Las Vegas. Milligan won the round in the tie-down roping with a time of 7.5 seconds. 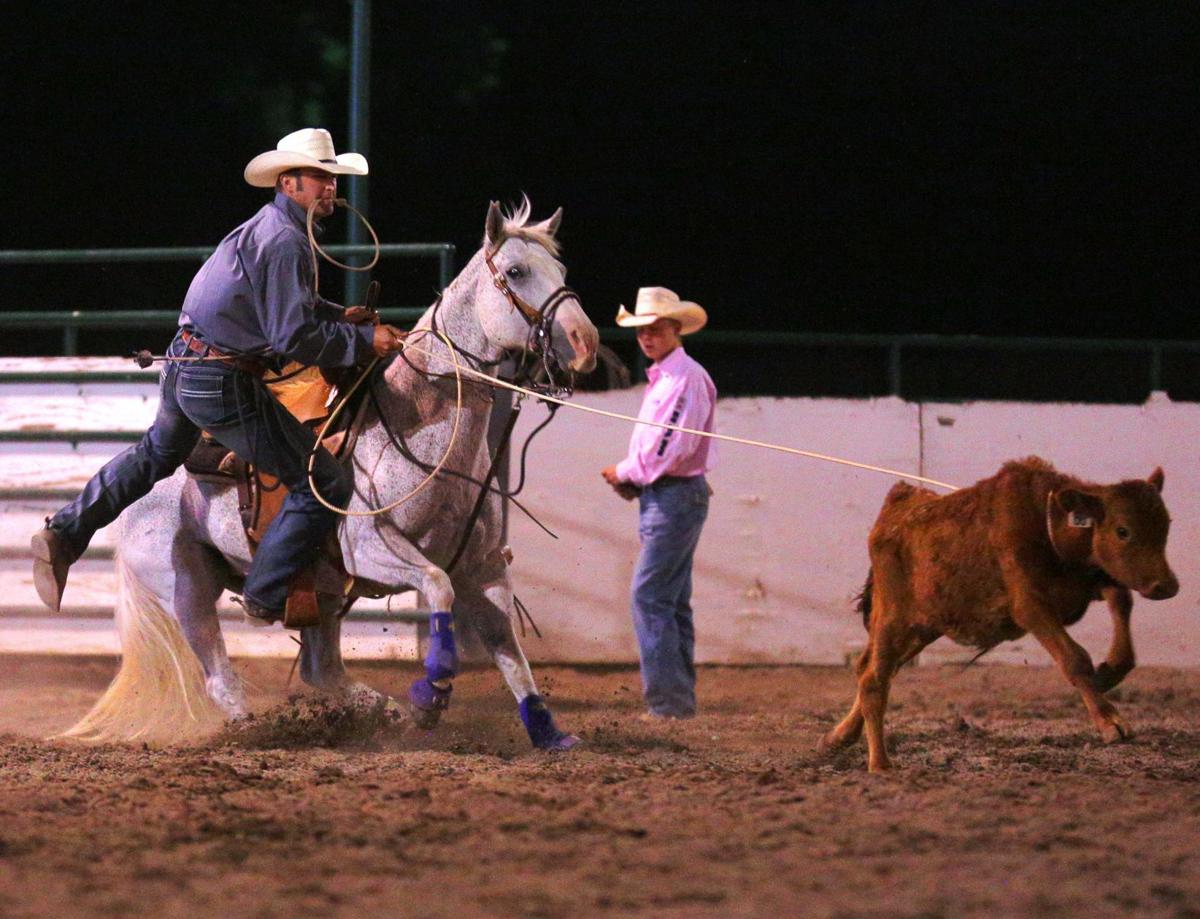 J.C. Malone dismounts his horse during the 2016 Silver State Stampede, at Elko County Fairgrounds. Malone won the tie-down roping by a full second, finishing with a time of 8.0 seconds and winning $1,520. He will rope Saturday night in the Stampede. 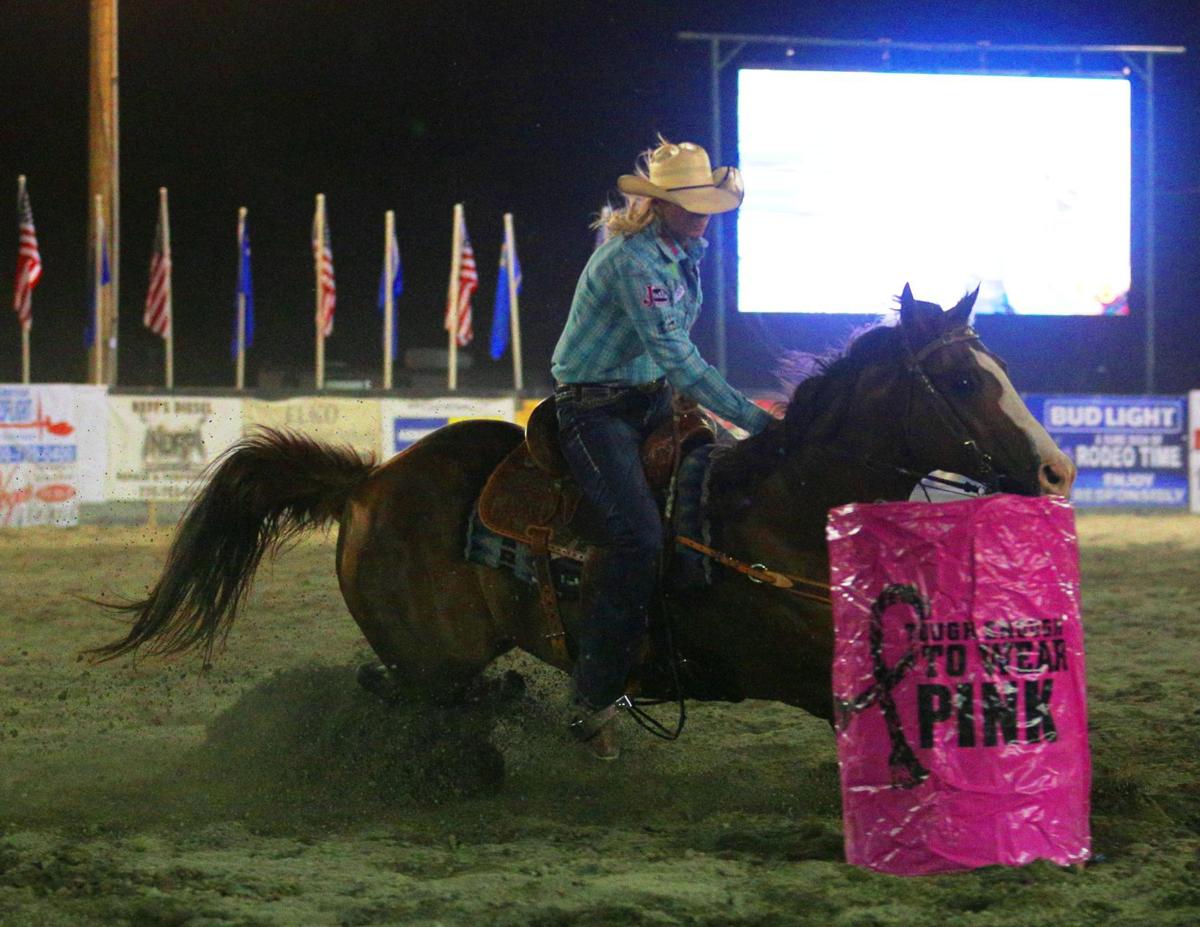 Four-time world champion barrel racer Sherry Cervi approaches the first barrel during the 2016 Silver State Stampede at Elko County Fairgrounds. Cervi won the event with a time of 17.60 seconds, earning $1,084 and aiding her charge to become the first $3 million cowgirl in the event. 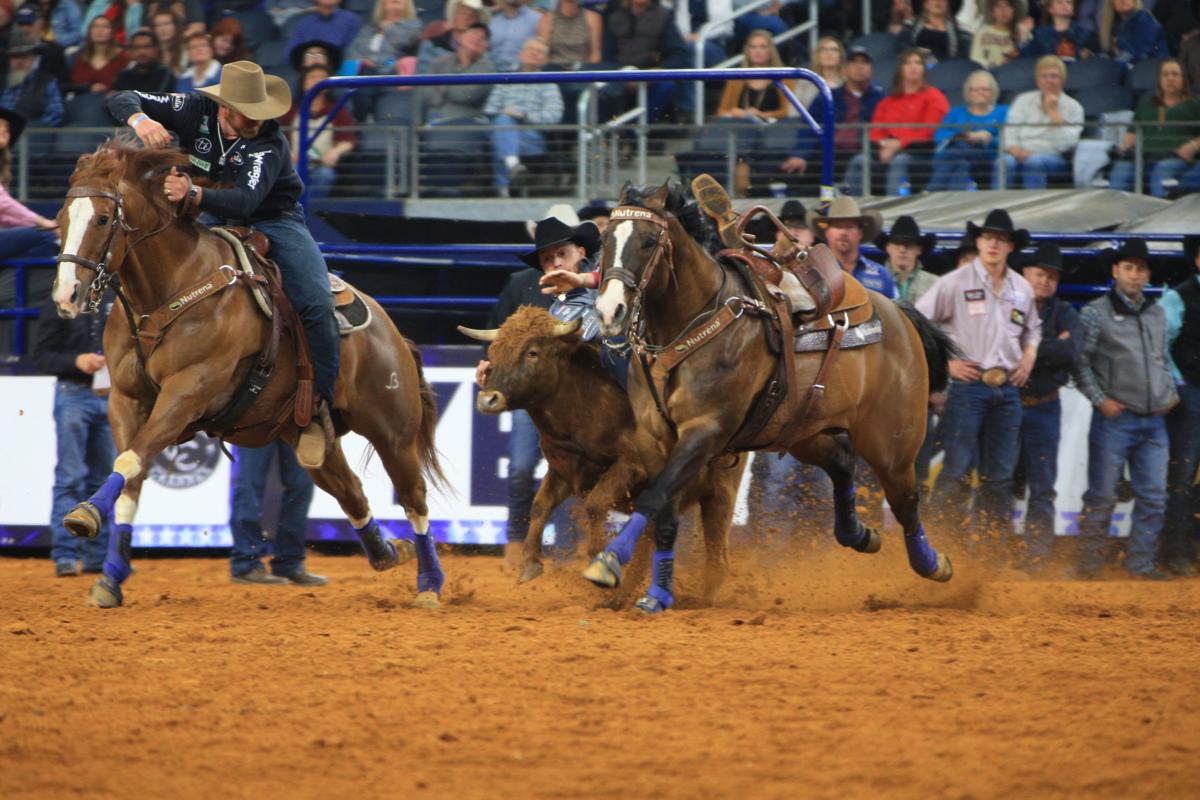 Elko's Dakota Eldridge, right, slides off Clayton Hass' horse "Benz" while Hass hazes, at left, during the short-go round of RFD-TV's The American on Sunday, March 8, 2020, at AT&T Stadium, in Arlington, Texas. Eldridge placed second in the round and won $25,000 with a time of 4.8 seconds.