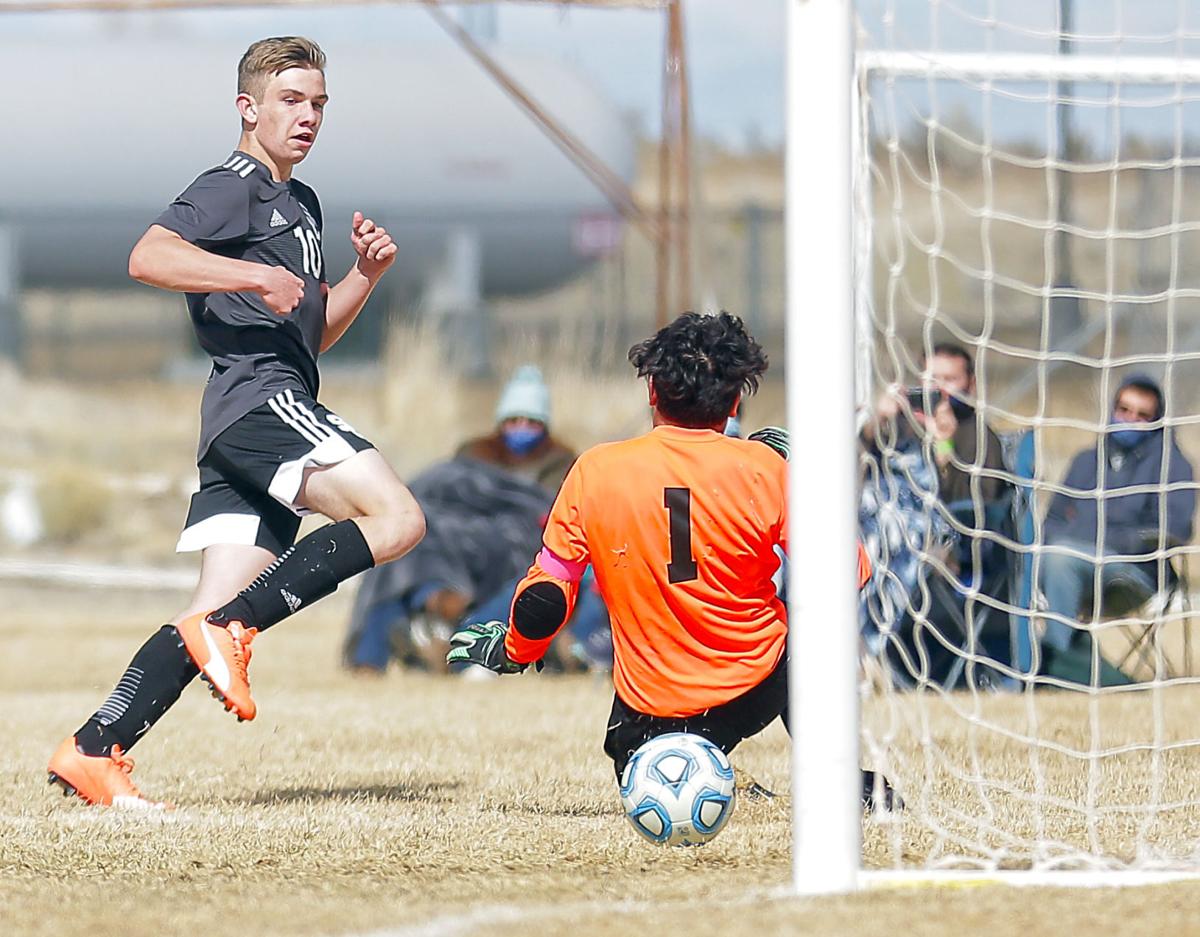 Spring Creek's Spencer Anderson, left, crosses a shot to the right post for one of his four goals during a haul against Battle Mountain on March 26, 2021, in Spring Creek. The Spartans won the contest by a final score of 6-2. 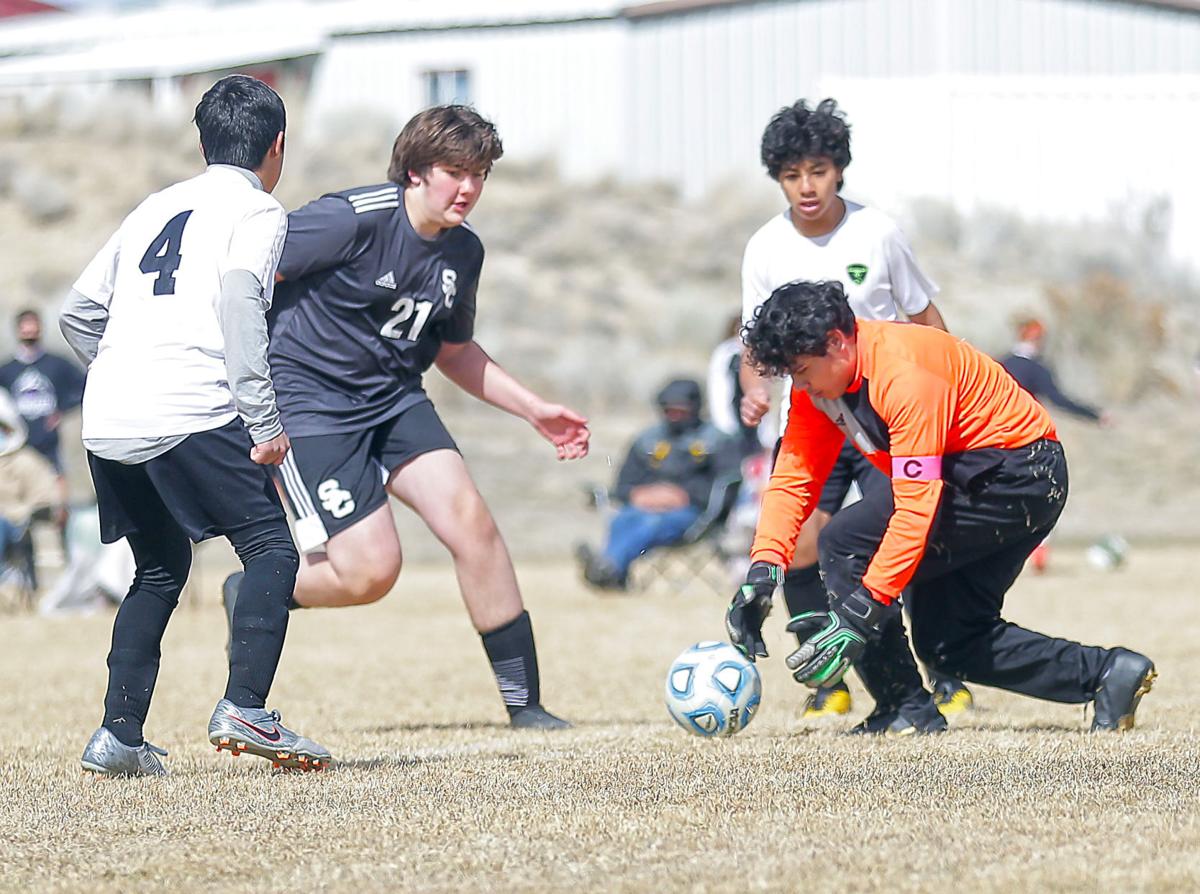 Spring Creek's Robert McAnany (21) eyes a loose ball after a bobble by Battle Mountain's goalie early in the second half on March 26, 2021, in Spring Creek. McAnany charged the ball and poked a shot through the three defenders, giving the Spartans a 3-0 lead in a 6-2 victory.

SPRING CREEK — On Friday, in a non-league contest, the Spring Creek boys soccer team took advantage against Division 2A program Battle Mountain in a 6-2 victory.

The Spartans opened the contest with a haymaker and staggered the Longhorns early, sophomore Spencer Anderson beginning what would eventually turn into a haul with the game’s first goal just three minutes into the contest.

In the 16th minute, Spring Creek extended its advantage to 2-0 — Anderson setting up a score.

With a long ball from the left side, Anderson connected with senior Tyler Ley on the right wing — Ley’s shot striping the net.

Freshman Nathan Morrill tried his hand — more like his foot — and nailed a solid ball on a line that was batted out by Battle Mountain’s goalie.

The Spartans earned numerous corner kicks but could not capitalize on boots from the flag.

On the other side, senior goalkeeper Darryn Spring made a save — Anderson flipping the field but having his shot deflected.

Another try from the left wing on a breakaway by Anderson was clapped with a one-handed save by the Longhorns’ keeper.

Ley nearly scored on another thru ball, but the keeper came forward for a last-second snag.

Battle Mountain’s best shot in the first half came off the foot of No. 19 from the right side, but his long-distance was rip was sent directly into Spring’s chest.

Anderson found another chance for the Spartans but sent the attempt wide to the right.

After a rebound, Morrill came extremely close to sticking home a put-back bunny on a shot by Ley from another look-ahead pass from Anderson.

From a corner kick, the Spartans missed a decent chance to pad their lead — the shot by freshman Darin Meza sailing over the crossbar.

The Spartans began the second half just as they did the first, on the offensive.

On a ball crossed from the right wing to the center of the box, sophomore Robert McAnany collected the loose change as the goalie bobbled the save.

McAnany poked the loose ball through a crowd of two defenders and the keeper — opening a 3-0 lead in the 42nd minute.

In the 43rd, the Spartans went back for more.

An attack down the left side by Anderson led to his second goal as he crossed a ball across the goalie’s face to the right side of the frame for a 4-0 lead.

Battle Mountain found the scoreboard courtesy of a Spring Creek foul inside the box, leading to a successful penalty kick by No. 6.

Trailing by three, the Longhorns sliced the deficit to a pair just two minutes later.

No. 6 used some crafty footwork and ball handling inside the box, beat numerous defenders and sent his rope into the right side of the net to make the score 4-2.

Ley nearly scored to make the game a three-goal affair once again, and Battle Mountain failed to utilize a free kick — the shot saved by sophomore backup goalie Tarron Metz.

On its own free kick, Spring Creek was topped initially but wound up with another try — the shot beaned by senior Ryan Nordstrom over the frame.

For the Longhorns, No. 19 stamped a hard ball that also sailed high.

Anderson essentially iced the contest with his hat-trick shot, once more racing behind Battle Mountain’s defense and winning a one-on-one with the goalie for a 5-2 lead.

The advantage grew to four in the 79th minute.

From a free kick, Nordstrom sent the ball short to Anderson on a run down the middle.

Anderson poked his kick between the keeper and a defender, the ball actually bouncing off the defender and back into his own frame.

The Spartans improved to 4-4 on the season (3-4 in league) with a non-conference, 6-2 victory over visiting Battle Mountain.

The Spartans will host Fallon (1-5 prior to Friday’s game with Dayton) at 2 p.m. Saturday, in Spring Creek.

Look to the Chargers and Seahawks to make the playoffs

Spring Creek's Spencer Anderson, left, crosses a shot to the right post for one of his four goals during a haul against Battle Mountain on March 26, 2021, in Spring Creek. The Spartans won the contest by a final score of 6-2.

Spring Creek's Robert McAnany (21) eyes a loose ball after a bobble by Battle Mountain's goalie early in the second half on March 26, 2021, in Spring Creek. McAnany charged the ball and poked a shot through the three defenders, giving the Spartans a 3-0 lead in a 6-2 victory.