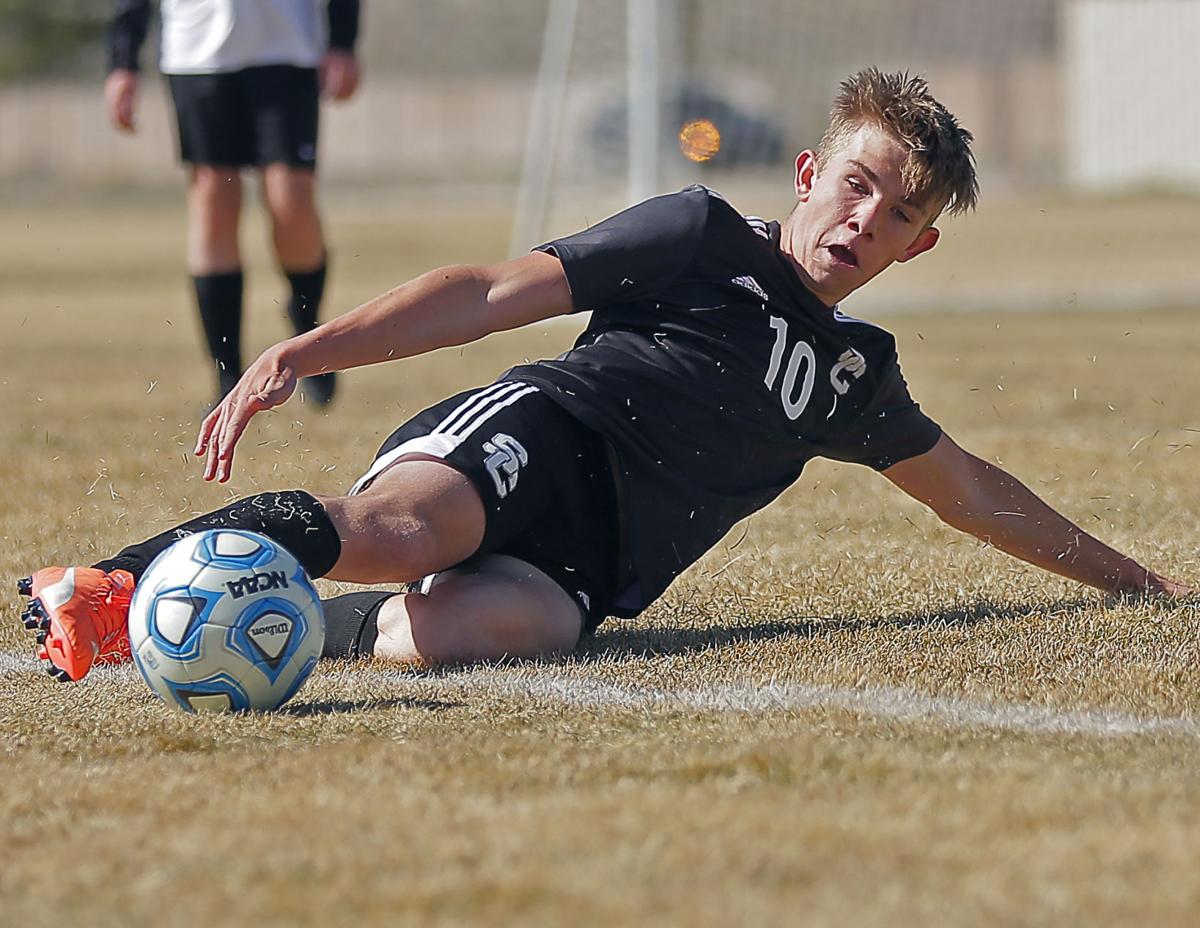 Spring Creek sophomore Spencer Anderson tries to save a ball from going out of bounds against Fernley on Saturday, April 10, 2021, in Spring Creek. Anderson gave the Spartans a 1-0 lead with a penalty kick in the 46th minute, and No. 3 Spring Creek earned a 2-0 victory over the No. 4 Vaqueros in the postseason round. 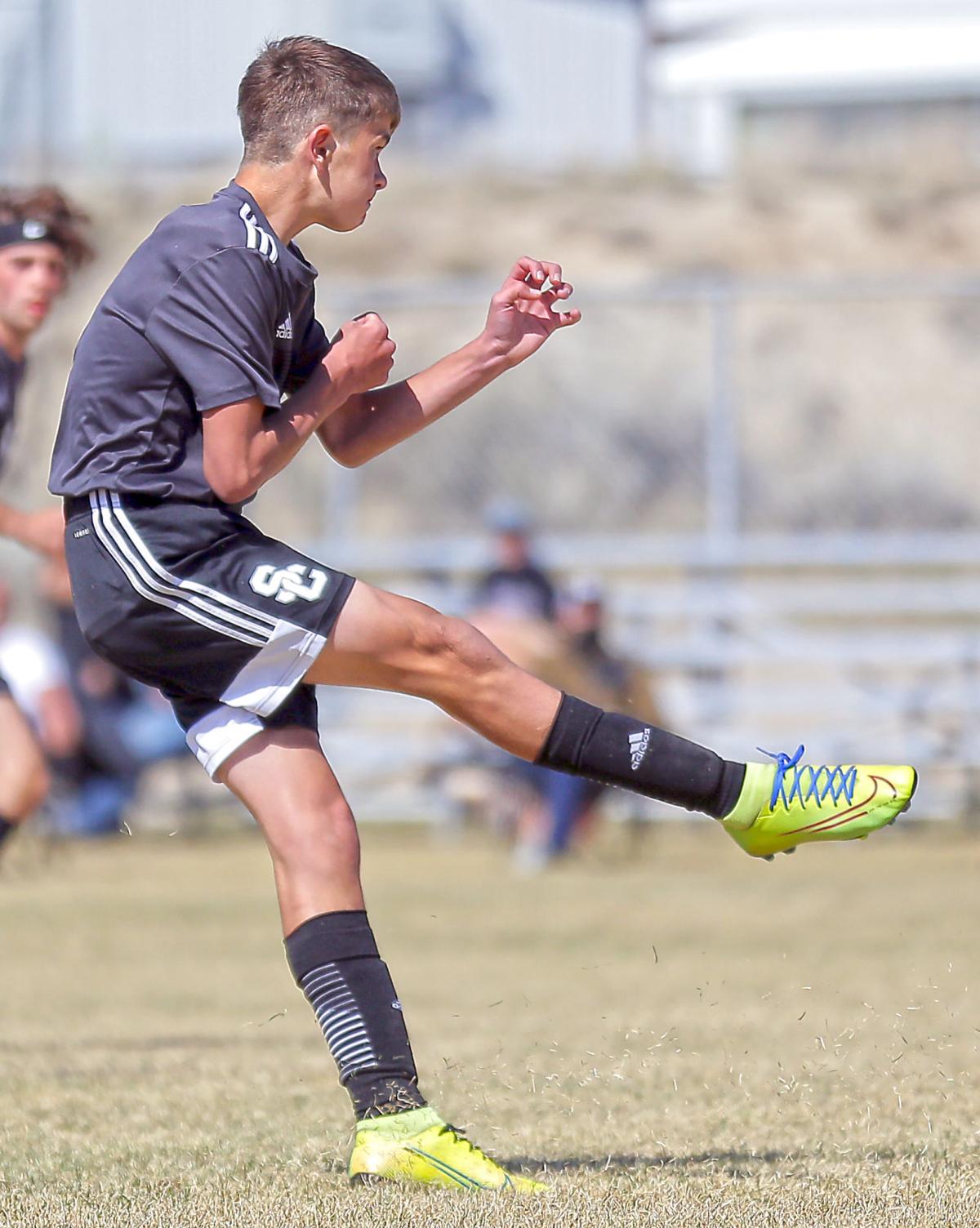 Spring Creek's Carson Fisher takes a shot against Fernley on Saturday, April 10, 2021, in Spring Creek. Fisher gave the Spartans a 2-0 lead in the 65th minute with a line drive into the upper-right corner of the net.

SPRING CREEK — The Spring Creek boys soccer team has a program to work with.

On Saturday, No. 3 Spring Creek won its postseason matchup against No. 4 Fernley by a final score of 2-0, both goals coming in the second half.

Spring Creek’s first scoring opportunity came on a header by freshman Carson Fisher, but the ball flew over the frame.

The Spartans created several chances but could not convert on tries from corner kicks or throw-ins near Fallon’s frame.

Senior Tyler Ley made a nice drive through several Vaquero defenders, but the goalie came forward for a scoop off the grass.

Ley then made a nice throw from the sideline well into the box, the goalie catching the ball before runs arrived.

Sophomore Spencer Anderson made a steal and carried down the left side, his shot batted beyond the end line for a corner kick.

Fernley nearly notched the go-ahead goal with a direct kick from the left wing, junior Robert Whalen’s boot coming close to sneaking inside the opposite upright in the top corner.

Nordstrom launched another direct kick over the frame, and Anderson tagged a screamer that was stopped by Fernley’s goalie.

The Vaqueros crossed a free kick from sophomore Braeden Garrett to the middle, but the header attempt flew over the Spring Creek frame.

Spring Creek sophomore Jace Henseler got into the action but missed one shot wide to the right and came extremely close to giving the Spartans a 1-0 lead, chipping a shot over the goalie but missing the net.

Sophomore Leo Stephenson nearly scored ahead of the pack, but the goalie came forward for a last-second stop.

He then put his head on a throw-in from Ley, but the ball went over the crossbar.

Near the end of the half, Fernley freshman Alex Garcia took a shot but missed wide to the right.

At the break, the 3-4 postseason match was tied at zeros.

Fisher fired a shot that was saved to start the second half.

On the defensive end, junior Paul Castonguay — the lone 11-grader on Spring Creek’s roster — did a good job of clearing the ball away from the Spartans’ box after the Vaqueros challenged the middle on several kicks.

In the 46th minute, Spring Creek turned a defensive save into a scoring opportunity.

Following a save by senior goalie Darryn Spring, he — with the aid of the wind at his back — launched a bomb down the field, Anderson making a run toward the Fernley frame.

The Vaqueros’ keeper was penalized for turning his back to the charging players and not making a play on the ball, giving the Spartans a penalty kick.

On the PK, Fernley’s keeper lined up all the way to his right — leaving Anderson a chance to score to his right.

He did just that, thumping his shot into the lower-right corner for a 1-0 lead.

Spring made consecutive saves for the Spartans, and Whalen hit a long shot from the middle over the Spring Creek frame.

The Spartans nearly scored on a free kick from freshman Connor Knotts, and Spring Creek came close to notching a goal on the follow attempt by fellow freshman Nathan Morrill.

Spring Creek then had a corner kick sail long and over the players in the box.

Fernley had a free kick from the left wing, but the shot was saved by Spring.

Fished had a shot deflected by the chest of a Fernley defender, and his rebound try went over the frame.

For the Vaqueros, junior captain Broderick Garrett took a shot that sailed high.

In the 65th minute, the Spartans — namely Fisher — put Fernley on the ropes with a rope.

He absolutely nailed a line drive into the top-right corner of the net, opening a 2-0 advantage.

The Spartans nearly grabbed a three-goal cushion on a corner kick, the wind helping bend the ball back toward the frame but sending the shot around the far upright.

The Vaqueros almost booked their only goal of the contest on a nice cross from Whalen, the kick by Braedan Garrett being saved by Spring.

Congratulations to assistant coach Forrest Knotts — filling in for head coach Craigh Cornelius — and the Spring Creek Spartans for a successful season and postseason victory with a young roster that can grow and improve for years to come.

Spring Creek boys back to even in league

Spring Creek sophomore Spencer Anderson tries to save a ball from going out of bounds against Fernley on Saturday, April 10, 2021, in Spring Creek. Anderson gave the Spartans a 1-0 lead with a penalty kick in the 46th minute, and No. 3 Spring Creek earned a 2-0 victory over the No. 4 Vaqueros in the postseason round.

Spring Creek's Carson Fisher takes a shot against Fernley on Saturday, April 10, 2021, in Spring Creek. Fisher gave the Spartans a 2-0 lead in the 65th minute with a line drive into the upper-right corner of the net.