ELKO — If you build a rodeo during a pandemic, they will come.

Due to COVID-19 cancelations across the world of rodeo, the talent of the Silver State Stampede has never shown brighter — and may never again.

Kicking off with mutton busting at 6 p.m. Friday, the 2020 edition will get underway.

Get to the Elko County Fairgrounds early, gates opening at 4 p.m. daily through Sunday.

He will be followed by eight-time WNFR qualifier Caleb Bennett and five-time back-number earner Richmond Champion.

Winnemucca’s Trenten Montero — who earned his first trip to the WNFR in 2019 — will ride ahead of one of the best, if not the best, in the history of the sport.

Kaycee Feild — the four-time champion of the world and four-time WNFR average champ from 2011 through 2014 — has shown a reemergence in recent years, currently ranking second in the world after his 2020 win at The American.

Tilden Hooper has made a December trip to Las Vegas for six WNFRs, and he will spur his boots off toward the end the event.

In the middle of the perf, say hello to Nick Guy — who has seen six trips under the bright lights of Sin City.

The stock for the older group bucks like big bulls.

Albeit not in his bread-and-butter event, Shad “Money” Mayfield will head in the team roping for Garret Busby.

Mayfield is No. 1 in the world in the calf roping by nearly a three-time gap over second place — a year after his 2019 dream season in which he won the Texas state high school title, the National High School Finals Rodeo crown and made his first WNFR — coming off a grand slam at The American.

He will rope his calf in the Friday slack following the performance and the Ring of Fear.

Following the conclusion of the steer wrestling, buckle up — grab the rope strap — as one of the fan-favorite events of the Stampede rolls on with the Old West Broncs.

Cowboys will ride saddle bronc horses in everyday-working saddles, the riders allowed to rope-up — ride as, ride can.

Get on the edge of your seats.

Making his at the Stampede since 1998, the years have not knocked off all the antics and death-defying stunts of The Wild Child — so take in the Clown Act.

The classic event of rodeo, resembling a rocking-chair spurring motion when done correctly is loaded up with stars.

Chase Brooks — a two-time WNFR talent — will ride ahead of another man with a pair of trips to Vegas, in Jake Watson.

The young gun — the smiley-faced Dawson Hay — who lit up scoreboards and put the world on notice in December, will lift and scratch for all he’s worth in an attempt match his Round 6 win at his first WNFR.

From youth to experience, four-time WNFR qualifier Chet Johnson will look to prove he still has what it takes to ride with the best.

Three-time qualifier Tyler Corrington is hoping for a resurgence after a healthy drought of appearances at the Super Bowl of rodeo.

Cort Scheer — one of the best riders in the world when he’s healthy and on his game — vies for a Stampede win and his seventh trip to Vegas.

Closing the event, a pair of Paradise Valley talents — Luke Logan and Joe Harper — stare down the road toward making their first WNFRs, Harper currently ranking 22nd in the PRCA standings with the top-15 in the world getting their shots at 10-head apiece in Vegas.

After the tie-down roping, all fans — especially the kids — will love the exhibition of riding skills performed by the EhCapa Riders.

The fans should be thrilled for the barrel racing when 2017 world champion Nellie Miller turns the cans aboard her all-world horse “Sister,” as Miller attempts to replicate the runs necessary to make four WNFRs and claim a new average record at the 2017 WNFR.

The last woman on the day sheet has been there, done that.

Brittany Pozzi-Tonozzi has made the WNFR 13 times, nailed down a pair of world championships (2007, 2009) and claimed two WNFR average races in consecutive seasons (2006, 2007) — currently No. 1 in the 2020 standings of the Women’s Professional Rodeo Association Standings and looking to stay there.

Pump up the jams, lock in the hooks, hang on for eight seconds and get the hell out of the way — bull riding.

It’s not a matter of if a bull rider get hurt during their careers, it’s how bad.

Luckily, there’s a trio of stellar bull stompers out of the chutes during Friday’s perf.

After a 2018 trip to the WNFR, Dustin Boquet missed out on a 2019 qualification — but he’s back — currently ranking No. 2 in the world as he looks for his second trek to Vegas as the first gunner of the night.

Utah’s Josh Frost made his appearance in the WNFR in 2019, and he will ride his bull in the middle of the Friday perf.

Toward the end of the evening, cheer on 2011 world champion and 2016 WNFR average champ Shane Proctor.

Bad enough to get in one of six circles and attempt to avoid a costly hospital trip that may be caused by a fighting bull?

The last person remaining in their circle takes home the prize money, the fans’ reactions and the bragging rights at the Cowboy Bar.

Speaking of the Cowboy Bar, the beverages will be served and a dance will take place during and after the conclusion of Friday’s slack performance of the rodeo — which should be dynamite.

The show isn’t over after the last bull ride of Friday’s perf.

Friday’s slack will without a doubt feature fast runs and some of the best competition in the history of the Stampede — including steer wrestling, team roping, tie-down roping and barrel racing.

In the slack, take in the chance to watch 127 WNFR qualifications, 14 world championships and 13 WNFR average titles. 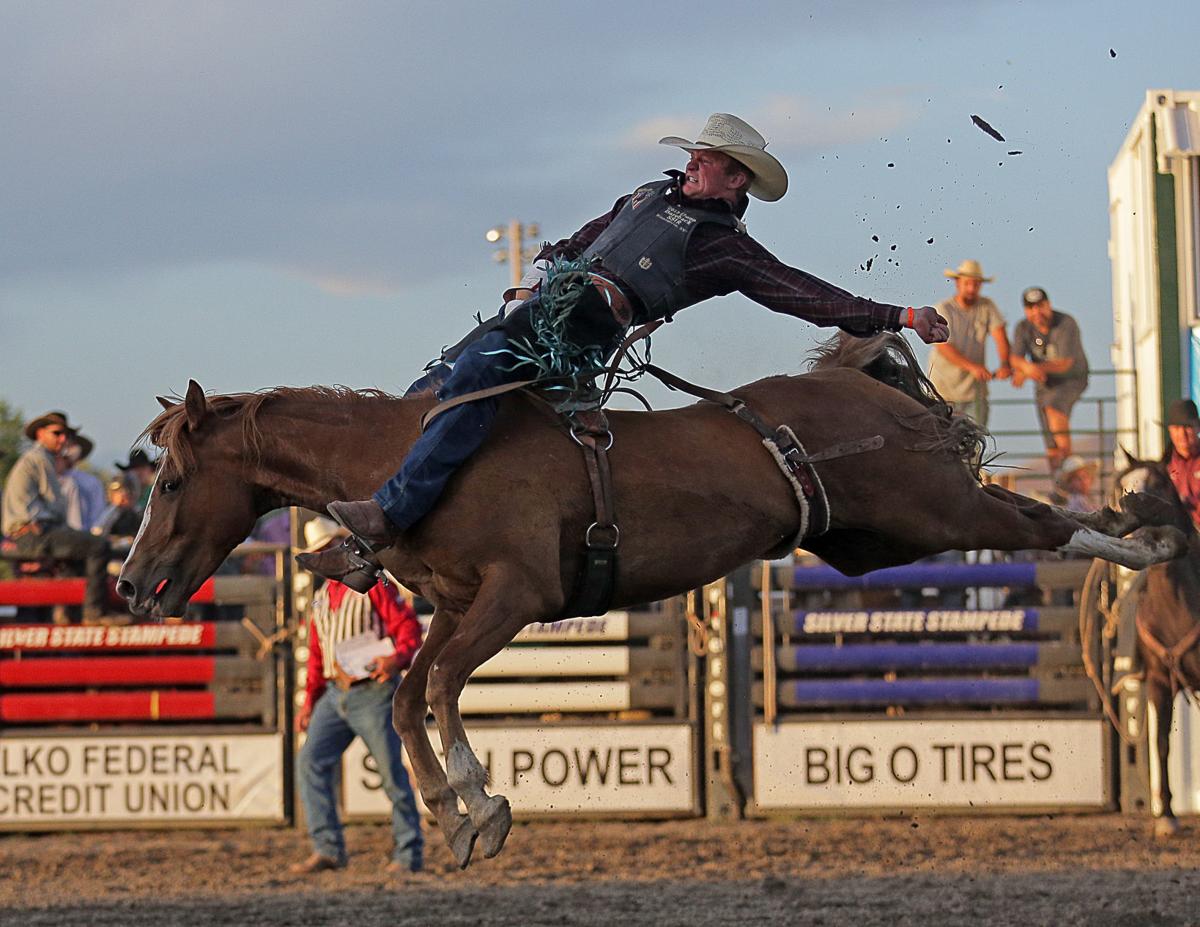 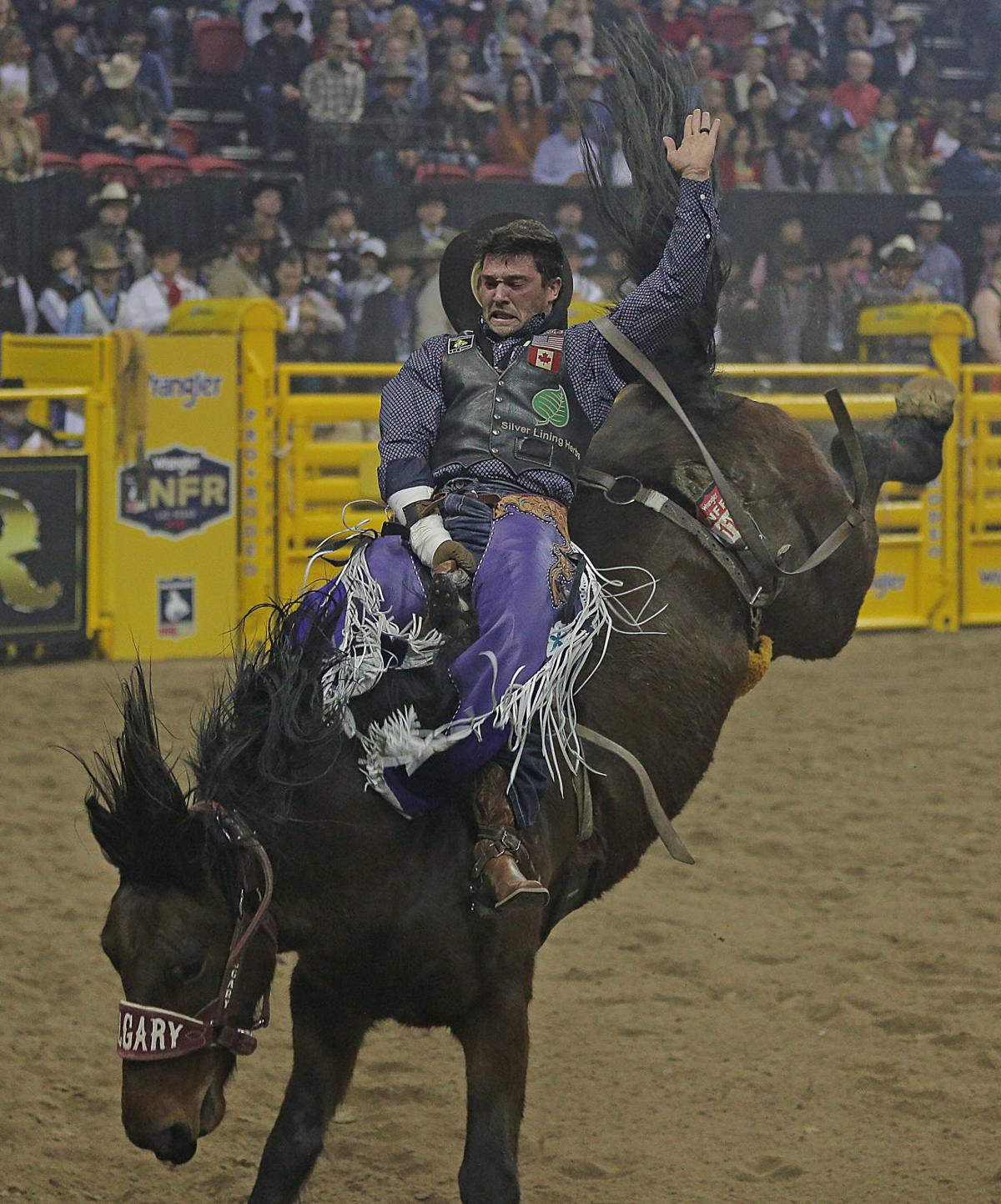 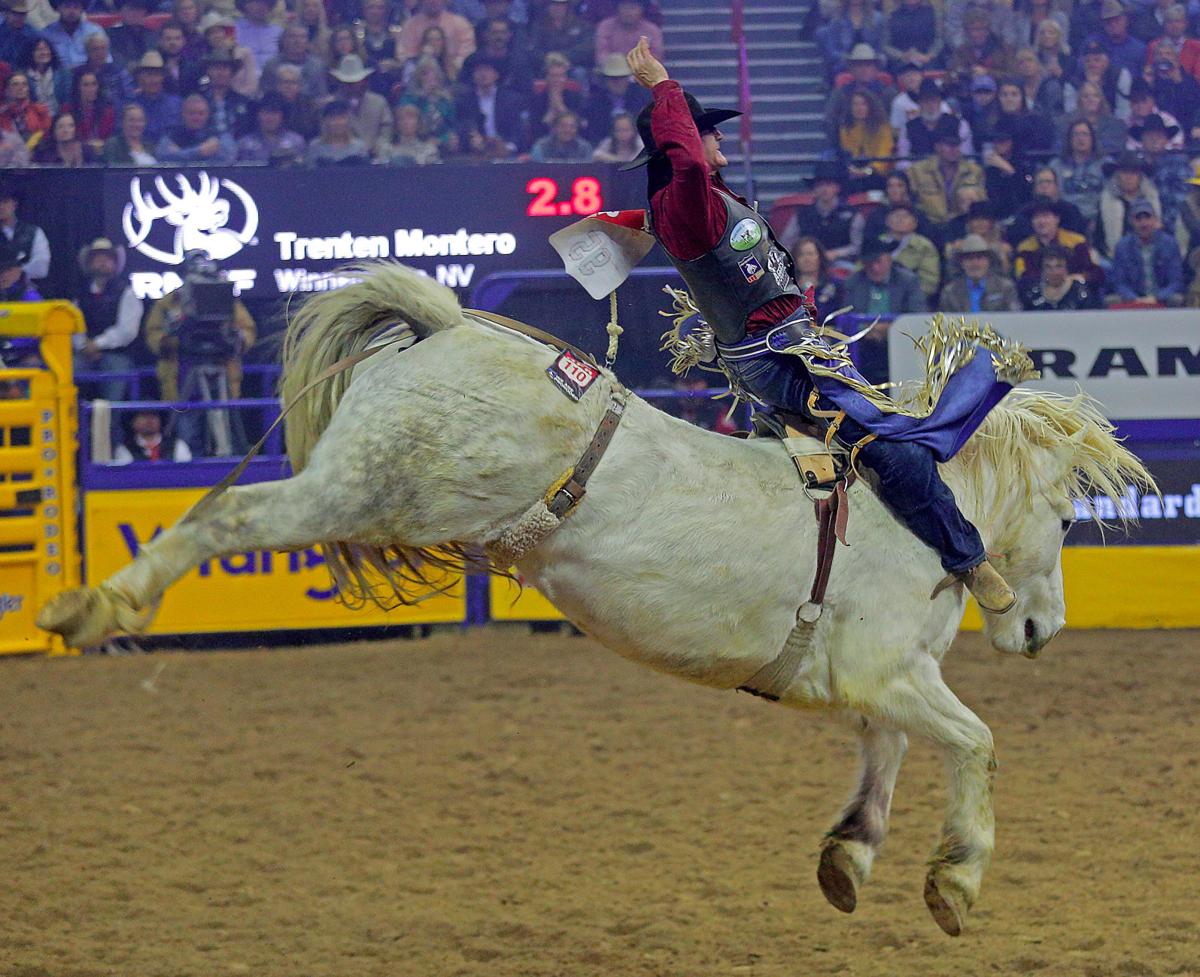 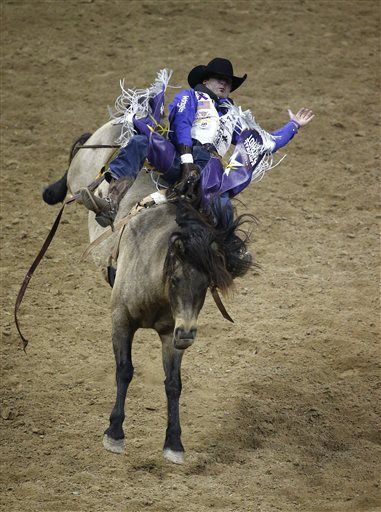 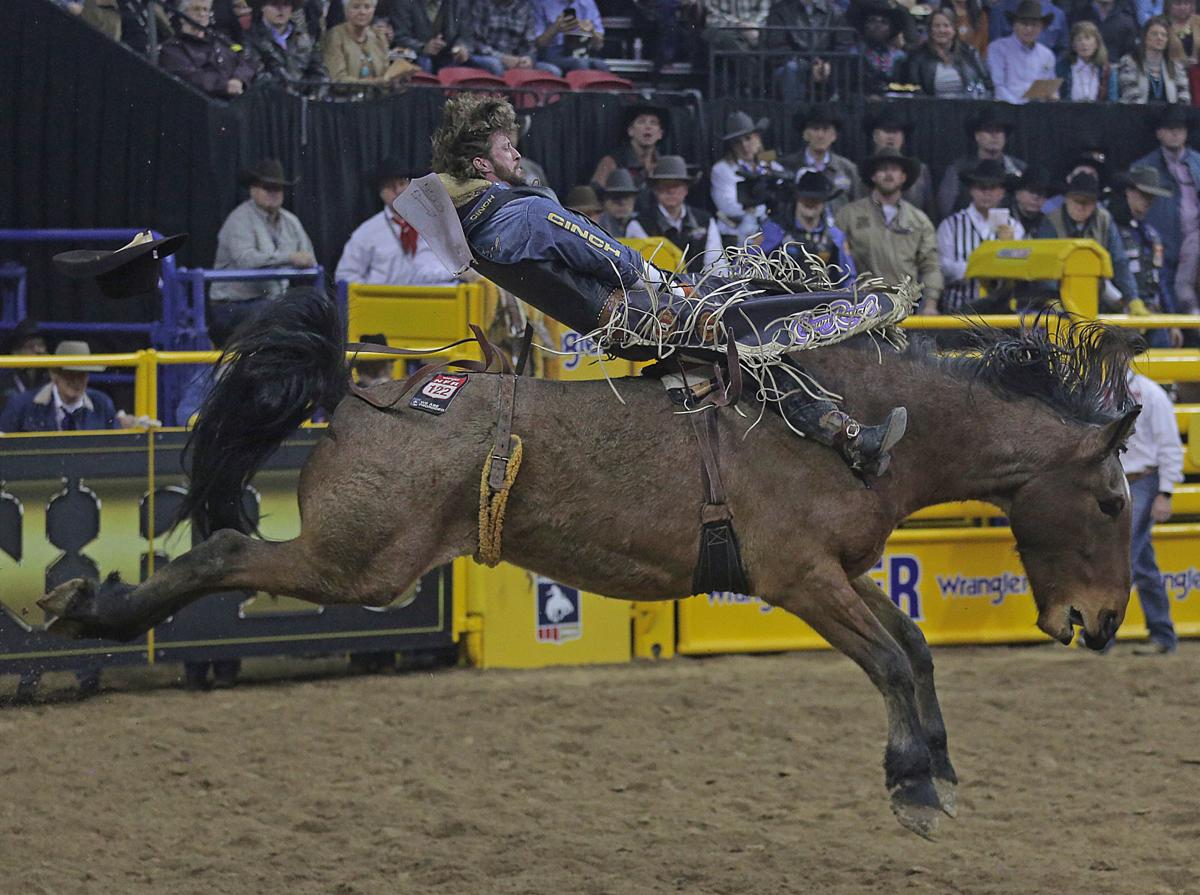 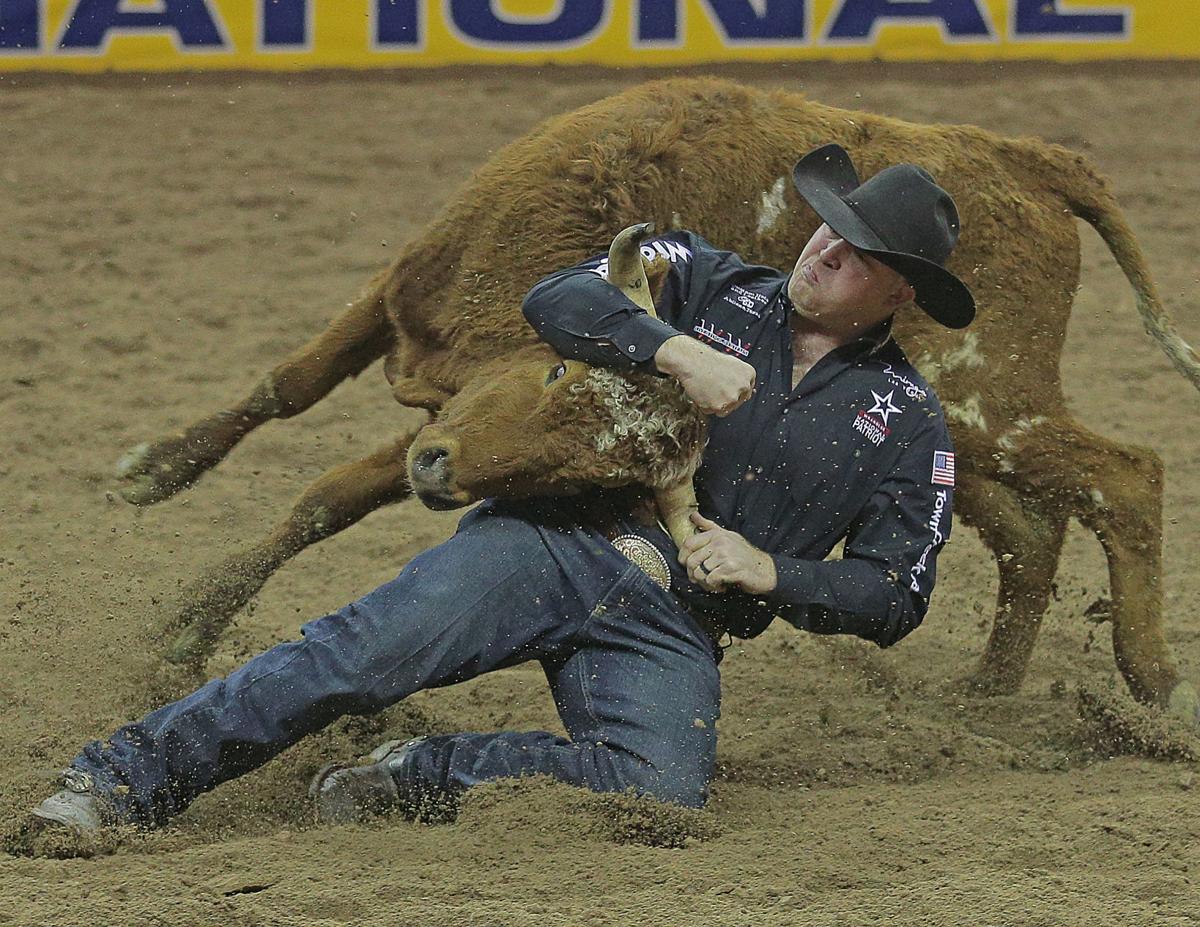 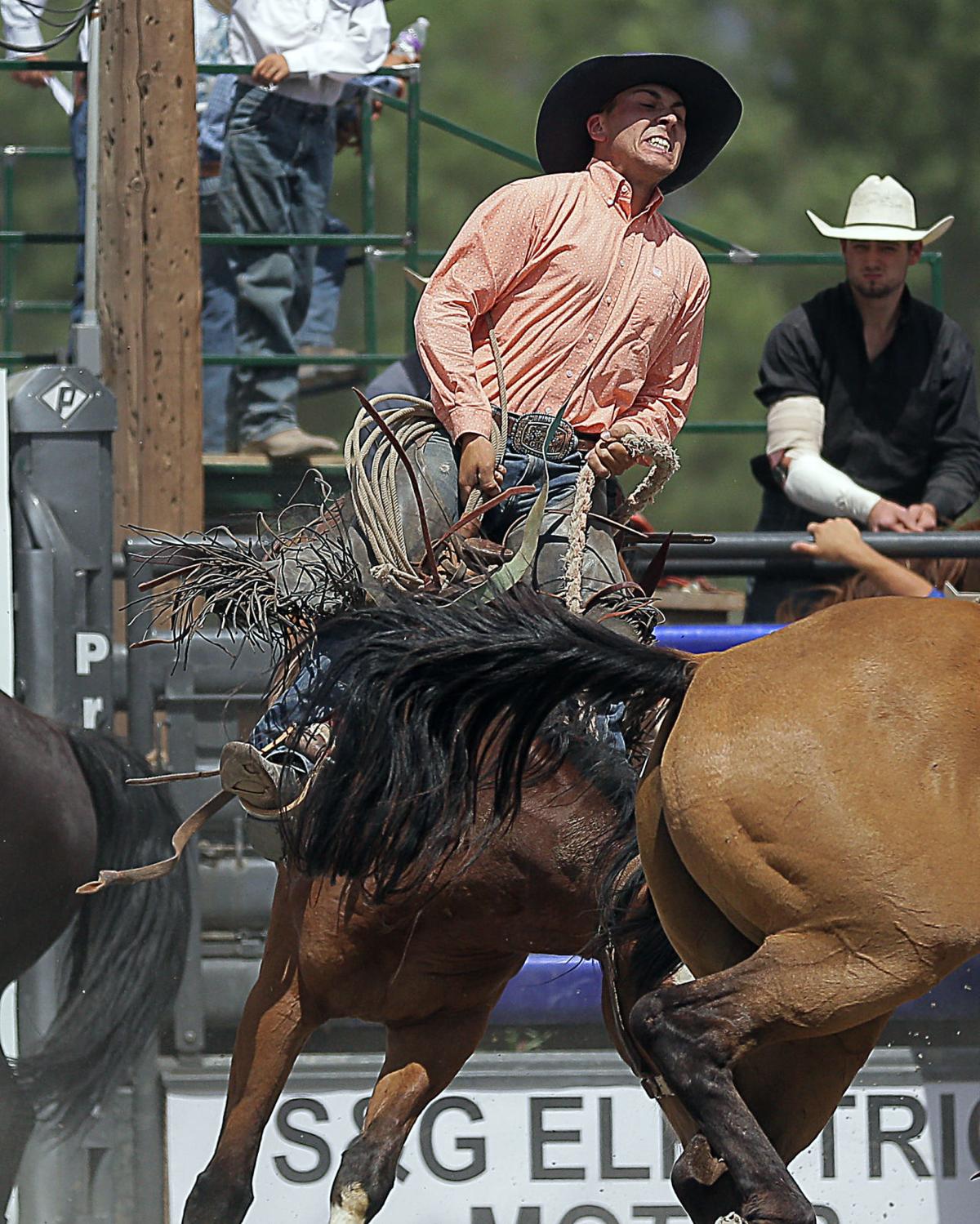 Lane Johnson rides his horse between the pickup men during the short-go of the Old West bronc riding of the 2019 Silver State Stampede, at the the Elko County Fairgrounds. He matched his first-round 78 and won the two-head average with a total score of 156 points. Johnson took home $1,350 for the average win and earned $675 for second place in the first round. 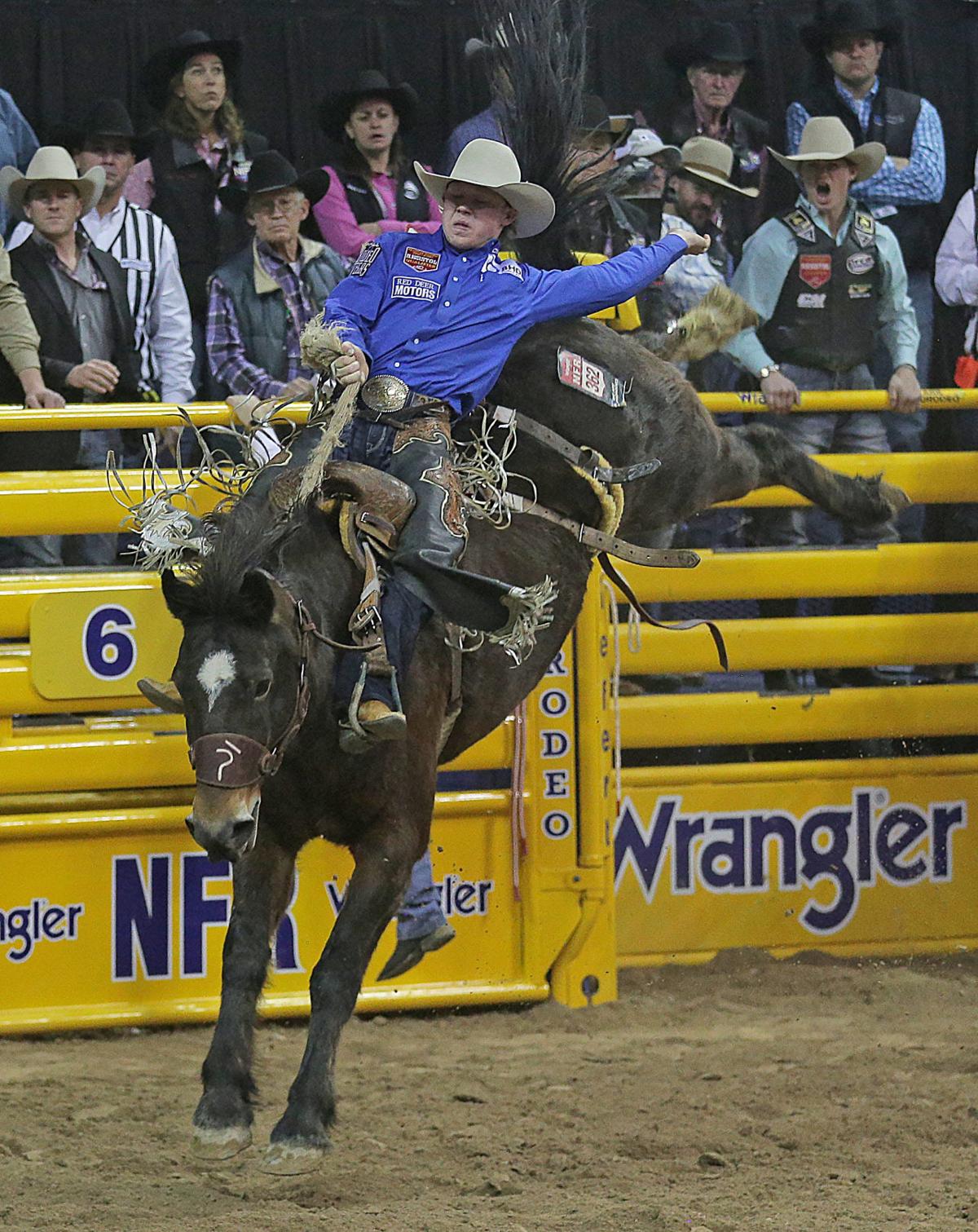 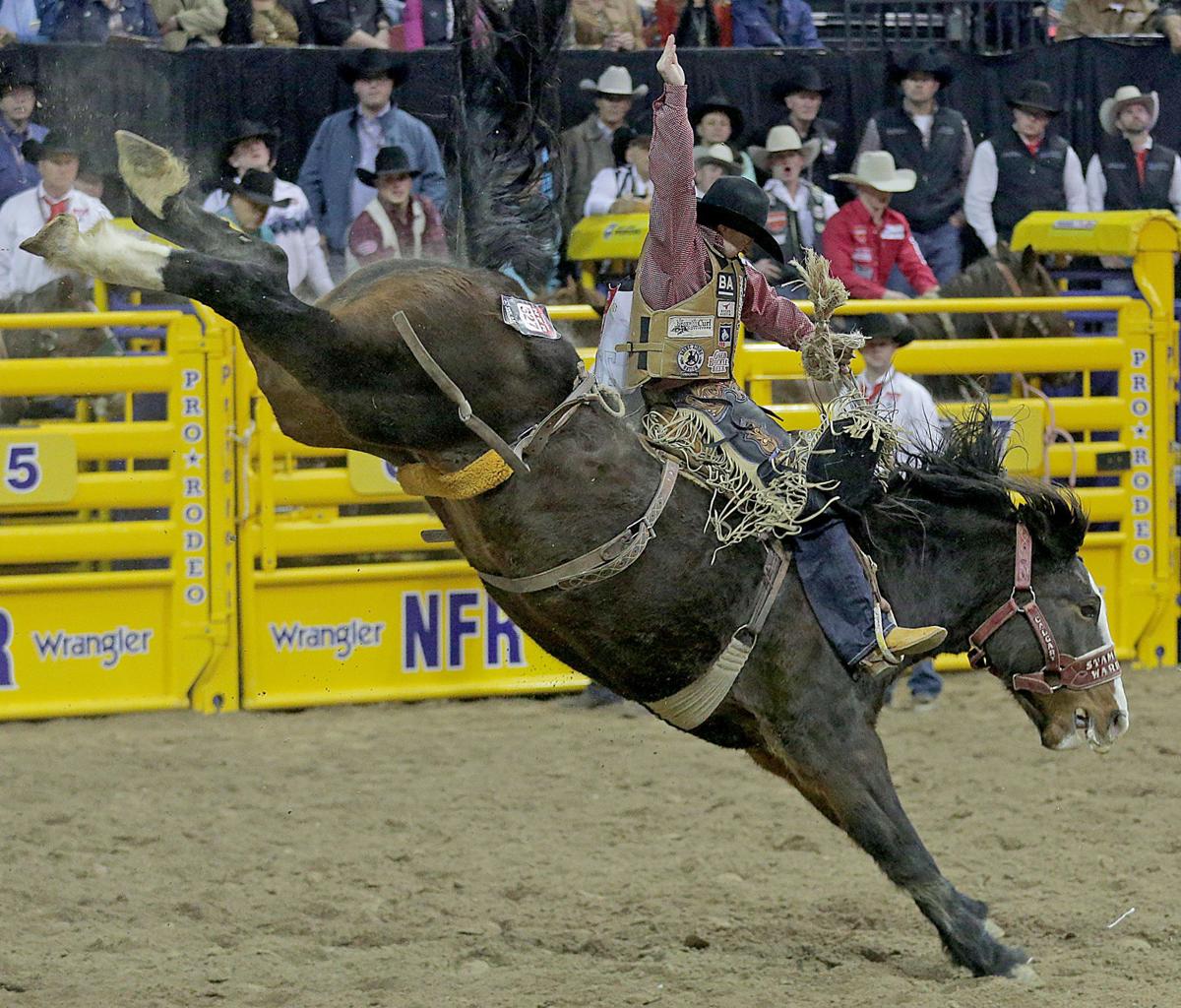 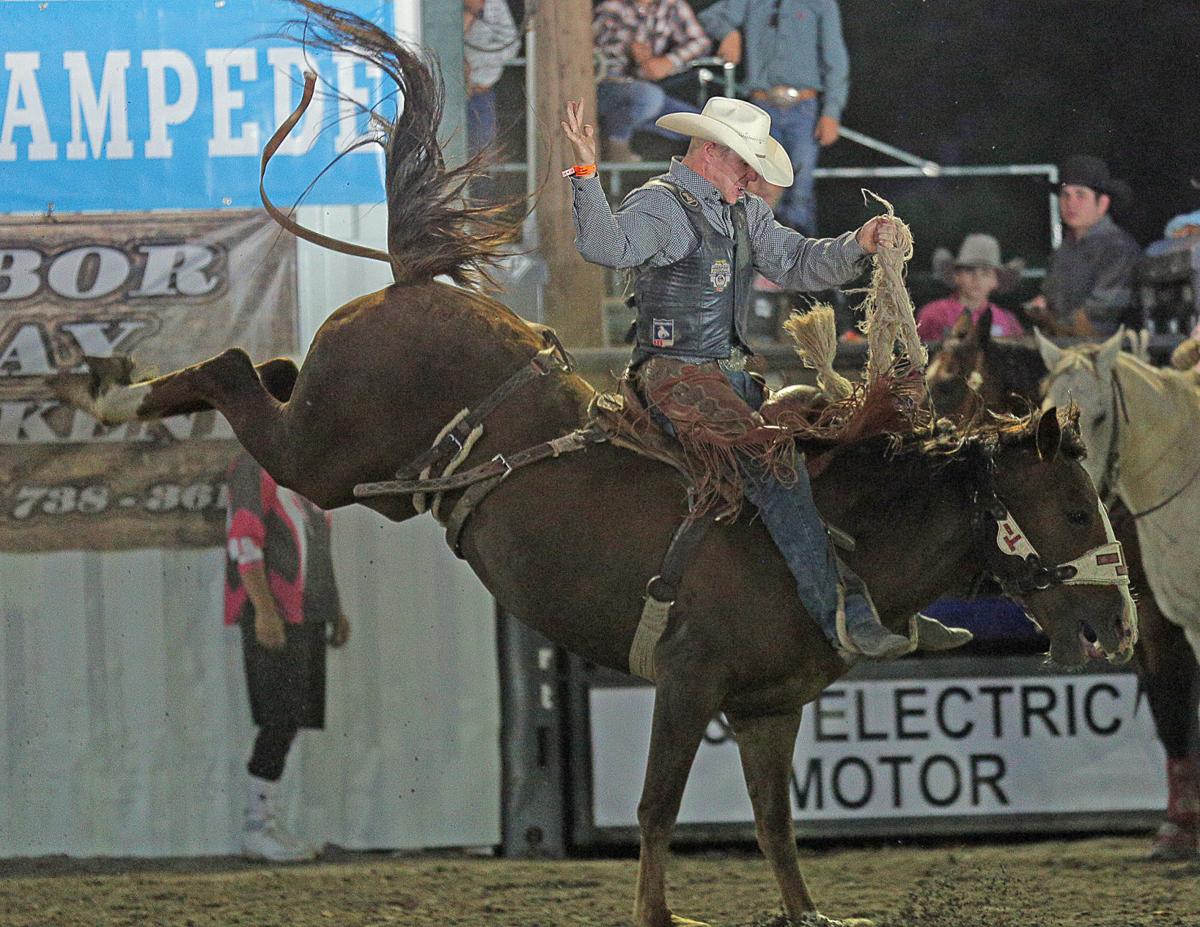 Paradise Valley's Joe Harper ties for fourth with an 80.5-point bronc ride during the 2019 Silver State Stampede, at the Elko County Fairgrounds, earning $733. 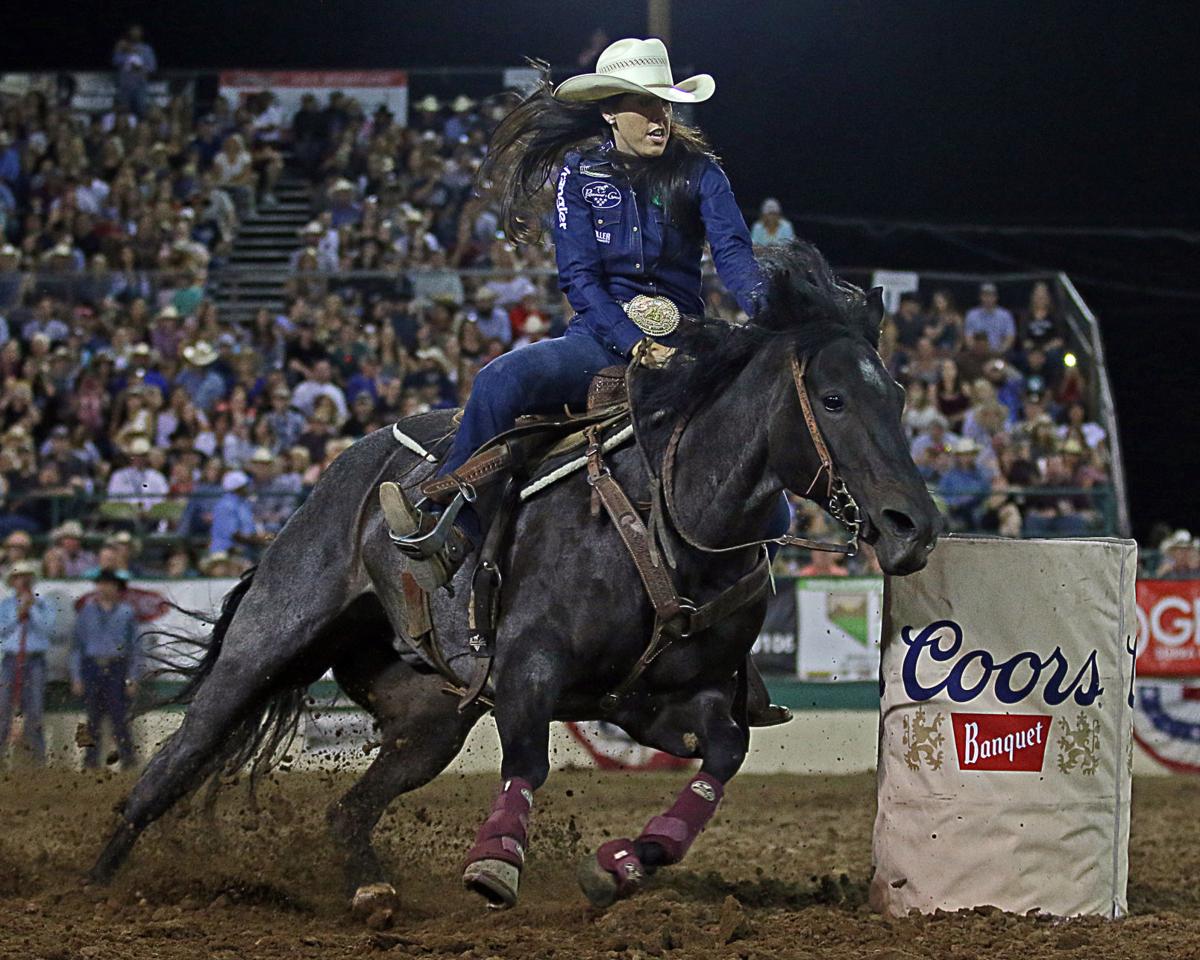 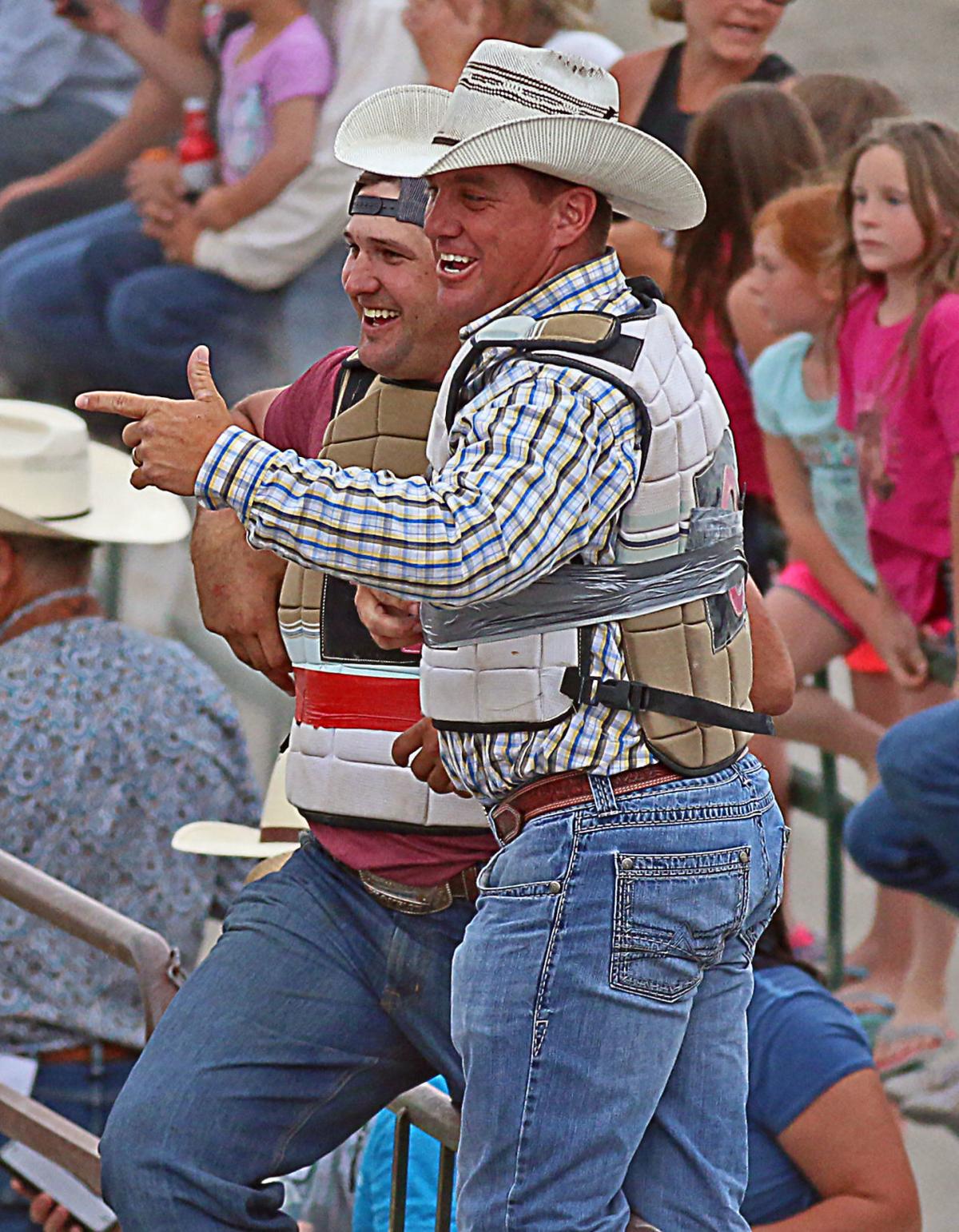 Justin Rockhill, left, and Jason Jones celebrate on July 15, 2018, after the Ring of Fear during the Silver State Stampede at Elko County Fairgrounds.