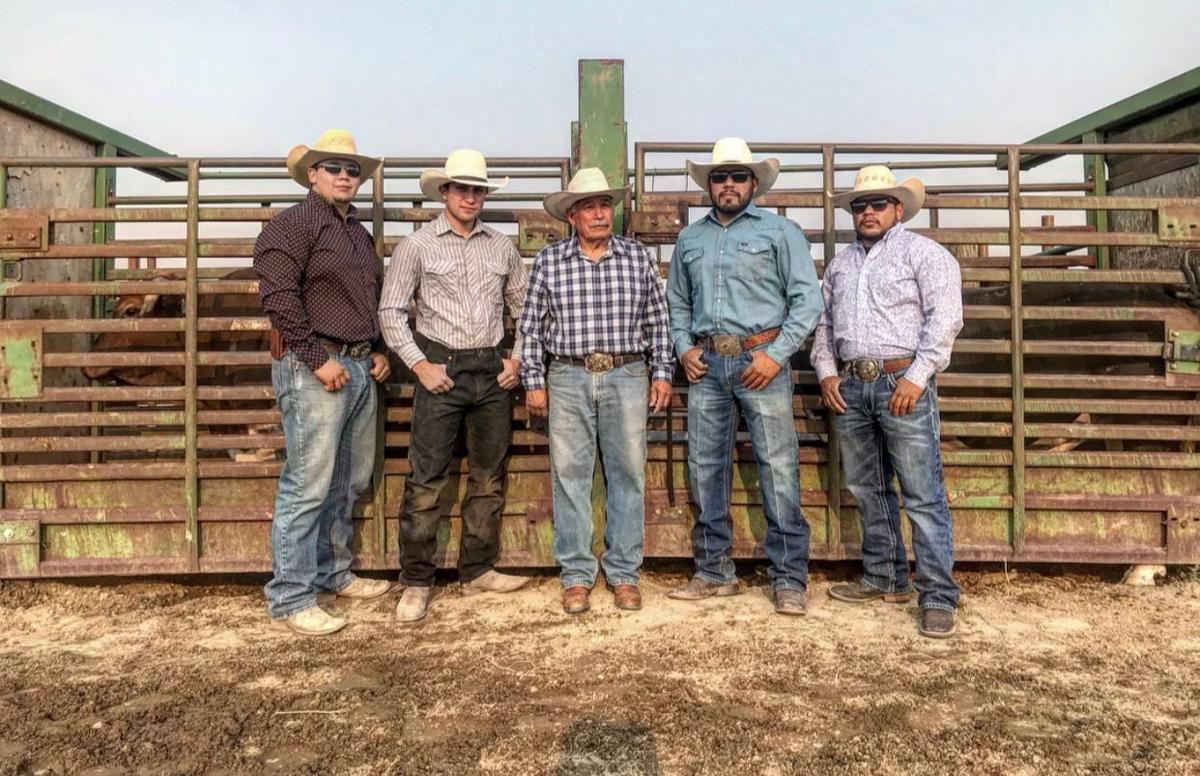 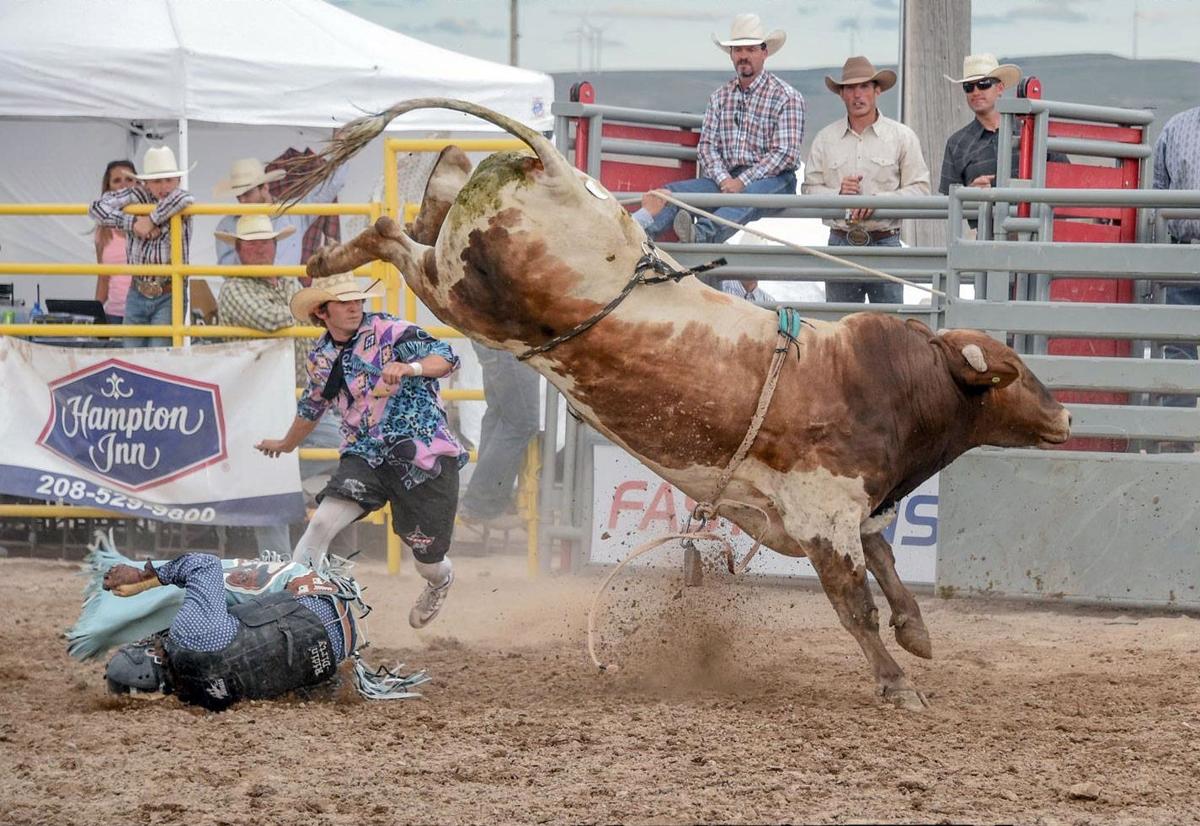 Benavides Bucking Bulls' "Chainsaw" bucks off a rider during the 2016 Rocky Mountain Bull Bash, in Idaho Falls, Idaho. Chainsaw will be featured as the Bounty Bull of the Gold Rush Bull Riding Challenge on Saturday, Sept. 12, 2020, at Elko County Fairgrounds. The winner of the bull riding will have the option to ride Chainsaw for an additional $500.

Originally scheduled for May 22-23, the event was canceled due to COVID-19 — leaving Benavides Bucking Bulls some lingering questions.

Owner Efren Benavides Jr. rode bulls through the ranks and wanted to remain close to the sport after he hung up his chaps and spurs.

“We started the bucking-bull deal in 2010. I stopped riding in 2013, and I wanted to get into the other side more,” he said. “We only keep about 10 bucking bulls right now. We help high school kids and take the bulls to local rodeos like the Jake Eary (Memorial) and Jess’s (Jones) deals (Outlaw Broncs).”

After taking their bull “Chainsaw” to the Professional Bull Riders Sacramento (California) Invitational from Jan. 25-27, 2020, the Gold Rush appeared to be right around the corner — coronavirus rearing its ugly head just a month and a half later.

“We were planning it since November (2019) and then we had to cancel in May. This whole nonsense has really hurt the community. Everybody wants to get back to somewhat normal,” said Efren Benavides Jr. “Right then, I started checking dates and schedules for everything. We had buckles already made with the year on them, so we looked at the Western (States Bucking Bull Association) schedule, the fairgrounds schedule, college and high school rodeos. You need bull riders to put on a bull riding, so I wanted to make sure the weekend we picked worked for everyone.”

“We had to come up with a mitigation plan that we submitted to the city, that was sent to the state and had to be approved by LEAP (Nevada’s Local Empowerment Advisory Council),” Benavides said. “They wanted to know what our plan was and how we are going to enforce it. It’s been a lot of work. We went down to the fairgrounds, checked all the exits and brought in extra bleachers and bathrooms with sanitizers and wash stations.”

Benavides said temperature screens will be performed at the front gate and that masks will be provided for everyone who does not have one.

“We didn’t want to have to get our own liquor license, so Cook’s (Fire Oven & Grill) will run the concessions,” he said. “When someone goes to a rodeo, they want to enjoy it — grab something to eat, get a drink, have a beer.”

As for the arena layout, fans can prepare for an up-close experience similar to those seen at large-scale bull ridings such as the PBR events — despite social-distancing measures in place — and take in some top-notch stock and talented riders.

“We will have a big turn-back area, but the bleachers will actually be in the arena. You’ll be right there, up close. You might even have some dirt thrown on you,” Benavides said. “We have probably about 20 contractors with 64 rider bulls signed up from all over the western states and about 35 riders. That arena is always dark, so we are going to bring in some light plants to brighten it up too.”

Although the May event itself was planned the “exact same,” Benavides said they “had bigger plans.”

“It was tough on sponsors. We had some more businesses on board, but they were hit hard by the virus too. Everybody likes coming to Elko — for the gambling, the food, everything,” he said. “And the people here like to party, they like rodeos and they support outdoor events. With us being able to put this on, everyone benefits — the city, the county, us and the community.”

The Gold Rushing Bull Riding Challenge is the only WSBBA live event of the entire season to feature fans, something Benavides is proud of.

“We teamed up with Jeff Remington, who is putting on his car show (Rides and Rods Elko Classic Car Show). We gave each other ideas and helped each other out with our plans. I’m thankful to the city, the county commissioners and the mayor. They have all been super supportive,” Benavides said. “Everyone wants to qualify their bulls for the PBR Finals, and guys want to ride. It should pay super-good and we have some pretty big names; guys I used to ride with and been around.”

Along with the bull riding, other events will take place as well — one giving fans the option of placing a stake in the game.

“We will have a Calcutta, so people can buy a bull and watch him buck Saturday in the bull riding,” Benavides said.

At 9 a.m. Saturday, they will buck calves with the “dummy box” at the fairgrounds.

“The futurity deal is open to the public, it’s free. It will be low-key and a lot of fun,” he said.

As for Saturday’s Gold Rush events, gates will open at 4:30 p.m. — the action kicking off at 5 p.m. with the mutton busting.

Elko County Sheriff Aitor Narvaiza and his Sheriff’s Posse will take to the arena at 6 p.m. for the national anthem, bull riding following.

During an intermission, youngsters will put their skills to the test against mini bulls brought by Tobie Olson’s Miniature Rodeo Bulls, of Cascade, Idaho, including a tribute to Jake Eary, whose mother, Carrie Eary, sponsored the event.

Following the end of the bull riding, the winner of the event will have the option of riding for an additional $500 on the Bounty Bull — Chainsaw himself.

“We just want to remind everyone to respect the codes and the restrictions, so we can continue to have events like this one,” Benavides said. “We’d like to thank all of our sponsors for making this possible, especially Vexil Cattle Co. They added $1,000.”

Benavides Bucking Bulls' "Chainsaw" bucks off a rider during the 2016 Rocky Mountain Bull Bash, in Idaho Falls, Idaho. Chainsaw will be featured as the Bounty Bull of the Gold Rush Bull Riding Challenge on Saturday, Sept. 12, 2020, at Elko County Fairgrounds. The winner of the bull riding will have the option to ride Chainsaw for an additional $500.