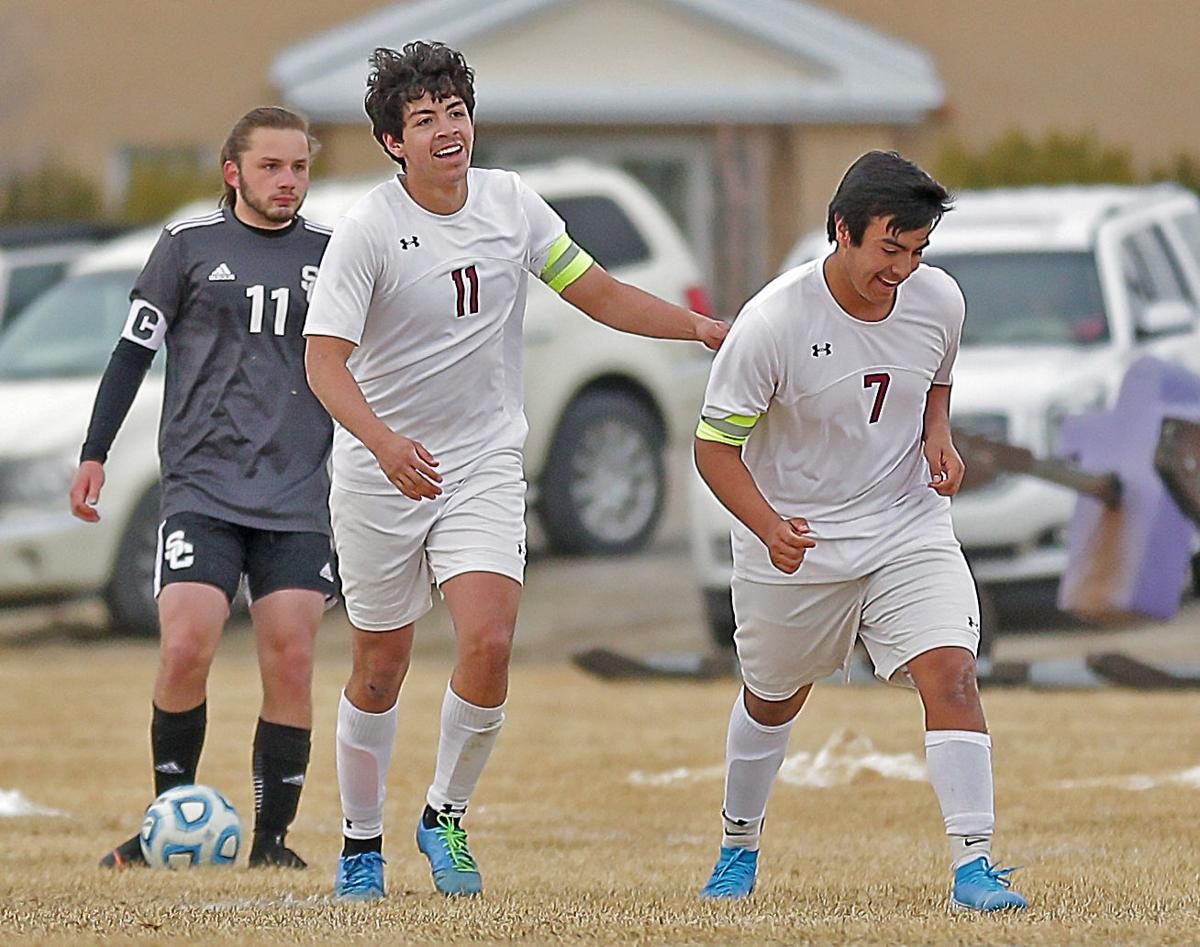 Elko's Jose Ventura (11) celebrates his second goal with teammate Freddy Cervantes (7), who assisted Ventura on the score and notched a goal of his own, on Wednesday, March 24, 2021, in Spring Creek. The Indians improved to 7-0 on the season with a 4-0 victory over the Spartans. 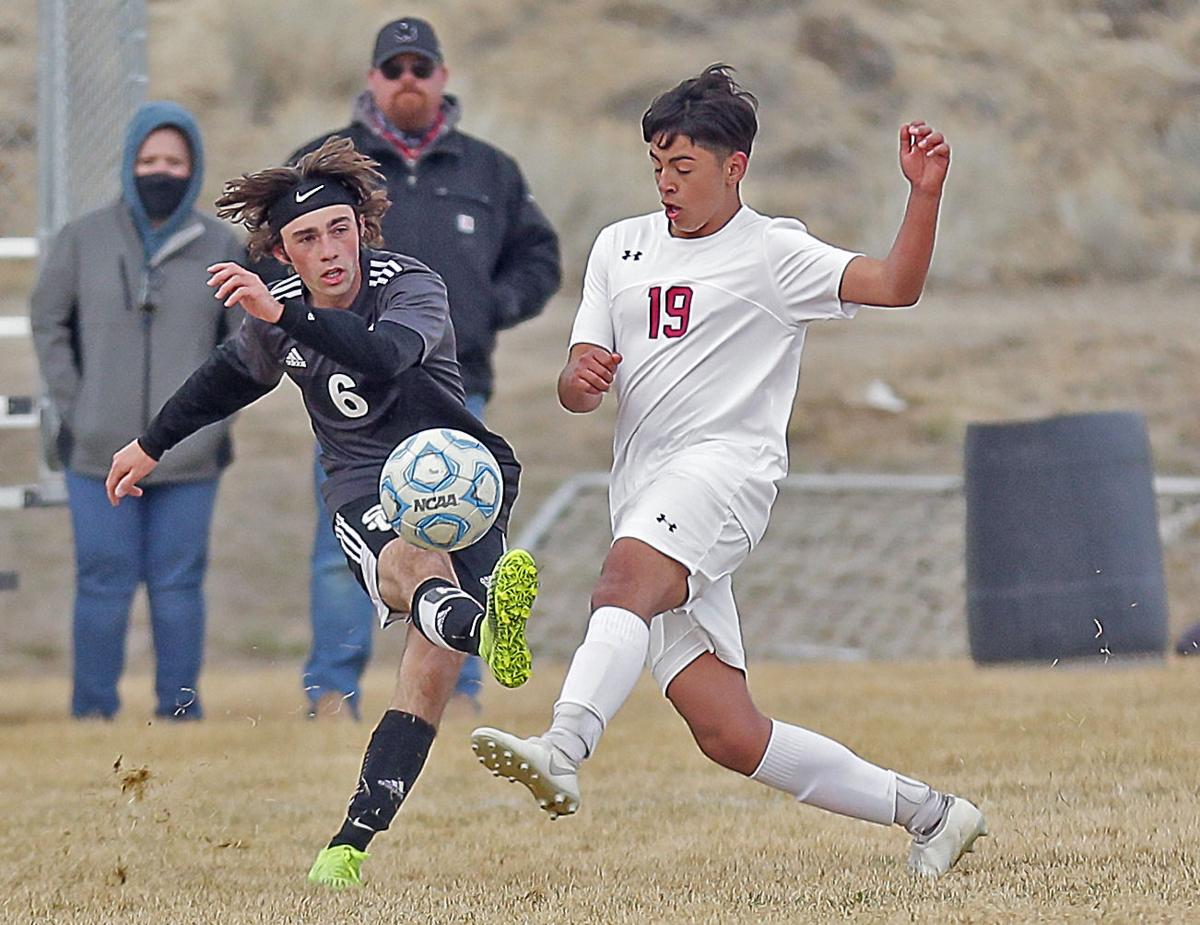 SPRING CREEK — The Elko boys soccer team gradually seized control on Wednesday, pulling away for a 4-0 victory on the road against Spring Creek.

In the early stages of the contest, one thing was clear — the Spartans’ game plan was to fall back and play defense.

Spring Creek kept the Indians at bay for much of the first half, but Elko finally broke through from long distance for a 1-0 halftime lead — the Indians gradually pulling away with three second-half scores for a 4-0 victory.

With the win, Elko remained unbeaten on the year with a 7-0 record — dropping Spring Creek to 3-4.

Elko junior Freddy Cervantes fired the first shot of the contest but missed wide to the right, and a corner kick from Spring Creek was cleared by the Indians’ defense.

The Spartans earned a free kick from the middle of the field, but the ball off the foot of sophomore Spencer Anderson sailed high over the frame.

From a throw-in, Elko junior Manny Cortez took a rip but sent the ball wide-left.

On the other end, Elko junior goalie Eric Azcue made a save from a Spring Creek free kick.

The Indians began to own the time of possession and settled down with short, quick passes — leading to an attempt for sophomore Austin Weight that was collected by Spring.

However — not long before the break — a miscue on a free kick cost Spring Creek dearly.

The Spartans had Spring take the free kick outside of the box, the Indians stealing the ball.

Before Spring could retreat back between the posts, Cervantes launched a kick around defenders from beyond midfield — sending in the go-ahead score.

Elko went on the attack early in the second half, a free kick by Cervantes sailing high and a cross from senior Jose Ventura saved by Spring.

The Indians grabbed a 2-0 lead after switching Ventura from the right to the left side.

Carlos gained possession in the middle and sent a diagonal thru ball to Ventura on the wing, who raced past his defender and won a one-one-one with the goalie in the 43rd minute.

Azcue collected a free kick by Spring Creek, which began to play more offensively down by two scores.

Routinely working the left side of the field, the Spartans often crossed balls into the middle on passes from senior Tyler Ley.

One such pass led to a good look for Anderson, but the ball skipped high and flew over the frame.

Spring Creek could not take advantage of a corner kick, and Cervantes hammered a ball at the other frame — lining the shot straight into the chest of Spring.

Ley sent another pass from the left to the right to sophomore Jase Hensler, whose shot also sailed high.

Ley continued to look for his teammates on dribbles and throw-ins, several balls bouncing in the box before eventually being cleared by Elko’s defense.

After distributing, Ley worked the middle and took a shot from long distance — the ball drifting wide to the right.

For the Indians, Cortez sent a shot that was saved.

Elko grabbed a 3-0 advantage around the 58th minute, as Cervantes connected with Ventura — who wound up with another 1-v-1 with the keeper for his second score and nearly added his third moments later.

Freshman Andres Andrade launched a shot from the middle of the field that was saved.

For the Spartans, Anderson took a free kick that deflected back by Elko’s wall — resulting in a big collision as a player from each team went for the ball.

A free kick by Spring Creek senior Ryan Nordstrom sailed over the crossbar, and Cervantes came close to tacking on his second goal for Elko.

With just minutes remaining in the contest, Cortez — generally a defender — transitioned to offense and benefited from a cross by Ventura.

Cortez one-touch poked his shot to the right side of the net, capping a 4-0 victory for the undefeated Indians.

The game was tied 1-1 at the break, Spring Creek's lone goal coming off he foot of Anderson.

However, the Buckaroos put in three-unanswered goals in the second half and rolled to a 4-1 victory over the Spartans.

The Indians won the first meeting 2-0 on a snow-covered field on March 10, in Fernley.

The Spartans’ next 3A North-East contest will take place versus Fallon (1-5 as of Wednesday) at 2 p.m. Saturday, in Spring Creek.

In the first meeting, the Spartans won a back-and-forth 4-3 ballgame on March 10, in Fallon, as Anderson racked up a four-goal haul for Spring Creek.

ELKO — Through four games, the Elko boys soccer team has yet to taste defeat — although, the Indians received their toughest test to date.

In the Division 3A North-East boys championship soccer game, 80 minutes was not enough time to settle the dispute.

For the upcoming fall campaign, Elko brings back the bulk of its nucleus — including many still-young athletes — but will need to fill the void of one player whose graduation leaves fast shoes to fill.

Elko's Jose Ventura (11) celebrates his second goal with teammate Freddy Cervantes (7), who assisted Ventura on the score and notched a goal of his own, on Wednesday, March 24, 2021, in Spring Creek. The Indians improved to 7-0 on the season with a 4-0 victory over the Spartans.