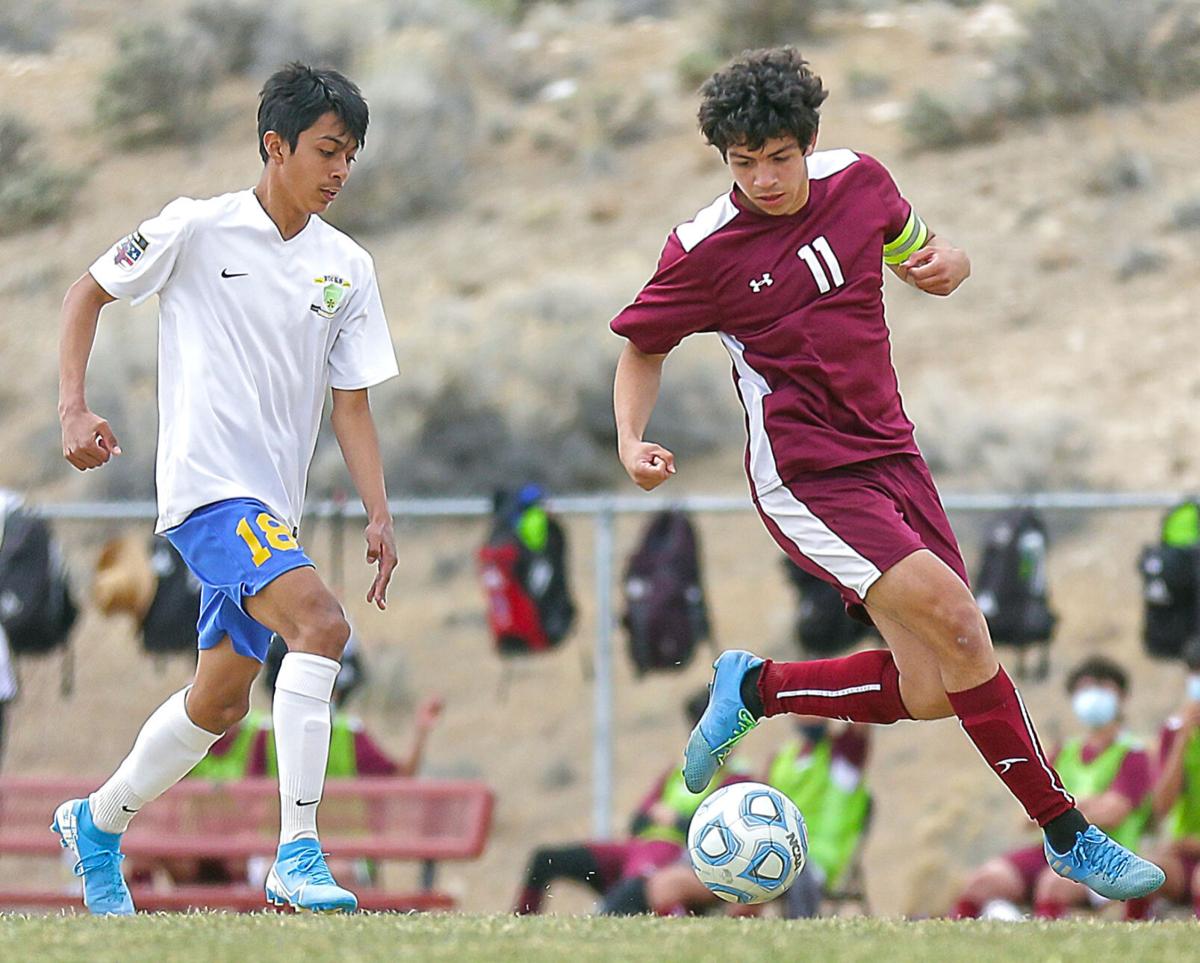 Elko's Jose Ventura (11) handles a thru ball against Lowry on Wednesday, April 7, 2021, at Adobe Middle School. In his final game with the Indians, Ventura tied the Division 3A North-East regional championship with a goal in the 39th minute on an assist from Marcos Carlos. Elko went on to win the league title after a double-overtime battle, scoring on a kick from Marquos Meza in the 109th minute for a 2-1 victory over the Buckaroos. 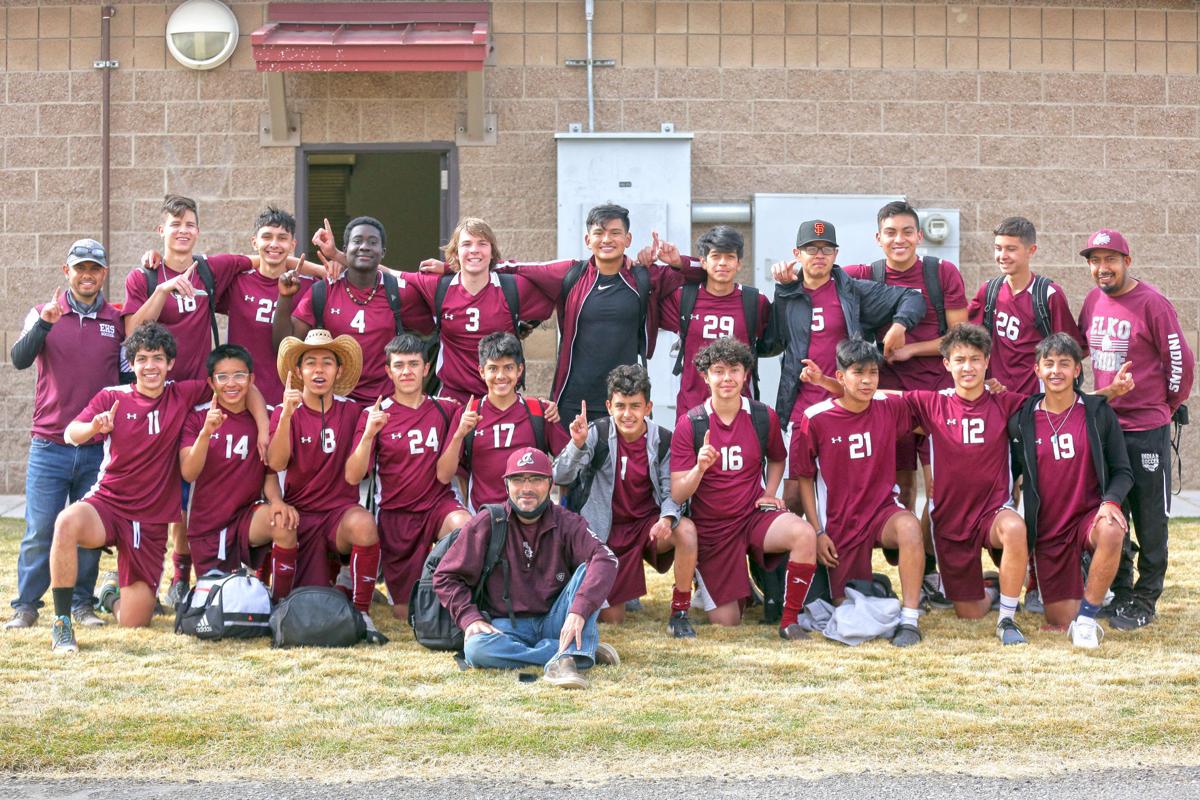 ELKO — In the Division 3A North-East boys championship soccer game, 80 minutes was not enough time to settle the dispute.

For the Elko boys soccer team, everything has come pretty easy this season.

It was only fitting that the biggest win of the year would have to come the hard way.

With just one minute remaining in the second overtime, the Indians prevailed after a Lowry miscue.

One of the Buckaroos’ defenders whiffed while trying to clear the ball out of the box, Elko junior Marquos Meza benefiting from the missed kick — poking the Indians to a 2-1 victory and the league championship.

The game was a far cry from Elko’s 2-0 victory over Lowry on March 13, at Adobe Middle, and definitely different than the Indians’ 6-0 road bashing of the Bucks on March 31, in Winnemucca.

Lowry came ready to play on Wednesday, actually taking it to Elko for the majority of the contest.

Freshman Jesus Guizar missed a chip shot at point-blank range — sending his boot over the frame — and Elko junior goalkeeper Eric Azcue made a big save in a one-on-one against Lowry senior Christian Cuevas.

On the other end, Elko had a chance as junior OC Orozco headed a ball off the crossbar from a corner kick.

Senior Jose Ventura carried the ball down the left side of the pitch and earned a corner kick — which was unsuccessful — and Lowry junior Andrew Bravo had a shot from the corner saved by Azcue.

The Indians played too many long balls — abandoning the short, simple passes — which gave the Bucks many easy steals.

Following a Lowry foul, Ventura sent a free kick over the frame.

Azcue made a huge save in another 1-v-1 situation, but the Bucks struck immediately after.

From the right wing, Cuevas crossed a shot to the opposite post — lifting Lowry to a 1-0 lead in the 23rd minute.

Orozco took a kick that was saved by Lowry sophomore keeper Marco Ruiz, and a free kick drifted wide to the right.

The Bucks were quicker to the ball, looked hungrier and were eager to hand Elko its first loss of the season in the most meaningful game of the year.

Toward the end of the first half, Elko began to apply more offensive pressure in search of the game-tying goal.

A shot by Orozco was stopped by Ruiz, who also turned away an attempt by junior Freddy Cervantes and a pair of kicks from freshman Nico Avila.

Cervantes sent a shot from the middle that missed wide to the left.

In the 39th minute — a minute before the break — the Indians broke through.

From a pass by freshman Marcos Carlos, Ventura beat his defender and wound up with a one-on-one versus the keeper.

He chipped a shot over and around the goalie, tying the contest.

At the half, the regional championship was tied 1-1.

In the second half, a free kick from Carlos to Ventura was deflected.

Lowry found multiple chances at the frame, the ball bouncing around — both off of feet and heads — but the Bucks did not capitalize or cash in on the ensuing corner kick.

Another wild sequence ended with Azcue making a clutch save on a rip from Guizar.

Cuevas found an open look behind Elko’s defense but missed wide-left, and Bravo sent another shot wide to the left as well.

From a free kick, Cuevas received the pass and pushed another shot wide of the frame.

Abarca cleared a ball from the middle with a header on a Lowry free kick, and the Indians earned a direct kick of their own but sent the ball wide to the right.

The Indians found few chances at all, and the Bucks continued to attack — Azcue making a hue save with a dive to the left.

Lowry wasted a free kick and a corner kick in succession, and junior Johan Silva fired a kick to the right of the post.

Near the end of regulation, the Indians made some solid offensive plays but shots from Avila and Carlos missed high and wide to the right.

Junior Manny Cortez and Ventura each took solid rips, both of which were saved by Ruiz.

At the whistle, the second half played out scoreless — the first half going for a 1-1 draw.

Lowry began the first overtime — yes, the first — with some promising chances.

A run by sophomore Jose Avila down the left wing resulted in a good look and a solid kick, but Azcue went down and made a big-time stop at the right side of the frame.

With a cross from the left to the right, the game nearly ended with a header — the ball off the noggin of senior Alex Ruiz bouncing over the crossbar.

Elko created few opportunities in the overtime period, which provided no scores for either team in 15 minutes of play.

The Indians dominated the action in the second overtime, connecting passes on thru balls and creating chances.

In the eight minute — actually the 103rd minute of soccer — Cervantes took a free kick from the left wing, Meza taking a chip shot after the rebound.

The ball bounced on top of the crossbar and came back into play, where it was momentarily grabbed by Ruiz.

On the follow, Abarca darted in and headed the ball into the net.

Elko went crazy — thinking it had just won the regional title — but the goal was taken off the board.

Ventura nearly scored but was stopped by the keeper, heading another attempt on a corner kick from Carlos over the frame.

If the game had gone another minute longer, the two squads would have faced off in a match of penalty kicks.

On a long ball, Ventura’s defender passed to the middle of the box — where another defender missed the ball.

Meza was there for the clean-up, booting the Indians to the 3A North-East regional championship in a 2-1, double-OT thriller.

Elko capped its remarkable season with an undefeated record of 11-0 — beating Lowry for the third time — dropping the Bucks to a mark of 7-4.

“You guys made the commitment, you put in the time. We knew that they were going to be a stronger team this game, but you guys found a way to win when you had to,” Elko coach Alonso Lujan told his team. “For the seniors — Jose and Stephen (Hutnyak) — I’m glad you got to go out with a win. Games like this will make us stronger for next season.”

Congratulations to the Elko Indians and Lujan for overcoming a strange, abbreviated and delayed season with an unblemished record and the 3A North-East league championship.

The White Sox are AL Central Champs, but can they make a run?

Will Lamar Jackson be ready for Detroit (+7.5)

Will Lamar Jackson be ready for Detroit (+7.5)

Which state is better, Kansas State or Oklahoma State (-5.5)?

Which state is better, Kansas State or Oklahoma State (-5.5)?

The Elko boys soccer team is making the most of an abbreviated, delayed season.

ELKO — With two games remaining, the Elko boys soccer team is also two games away from an undefeated regular season.

ELKO — Through four games, the Elko boys soccer team has yet to taste defeat — although, the Indians received their toughest test to date.

For the upcoming fall campaign, Elko brings back the bulk of its nucleus — including many still-young athletes — but will need to fill the void of one player whose graduation leaves fast shoes to fill.

Elko's Jose Ventura (11) handles a thru ball against Lowry on Wednesday, April 7, 2021, at Adobe Middle School. In his final game with the Indians, Ventura tied the Division 3A North-East regional championship with a goal in the 39th minute on an assist from Marcos Carlos. Elko went on to win the league title after a double-overtime battle, scoring on a kick from Marquos Meza in the 109th minute for a 2-1 victory over the Buckaroos.