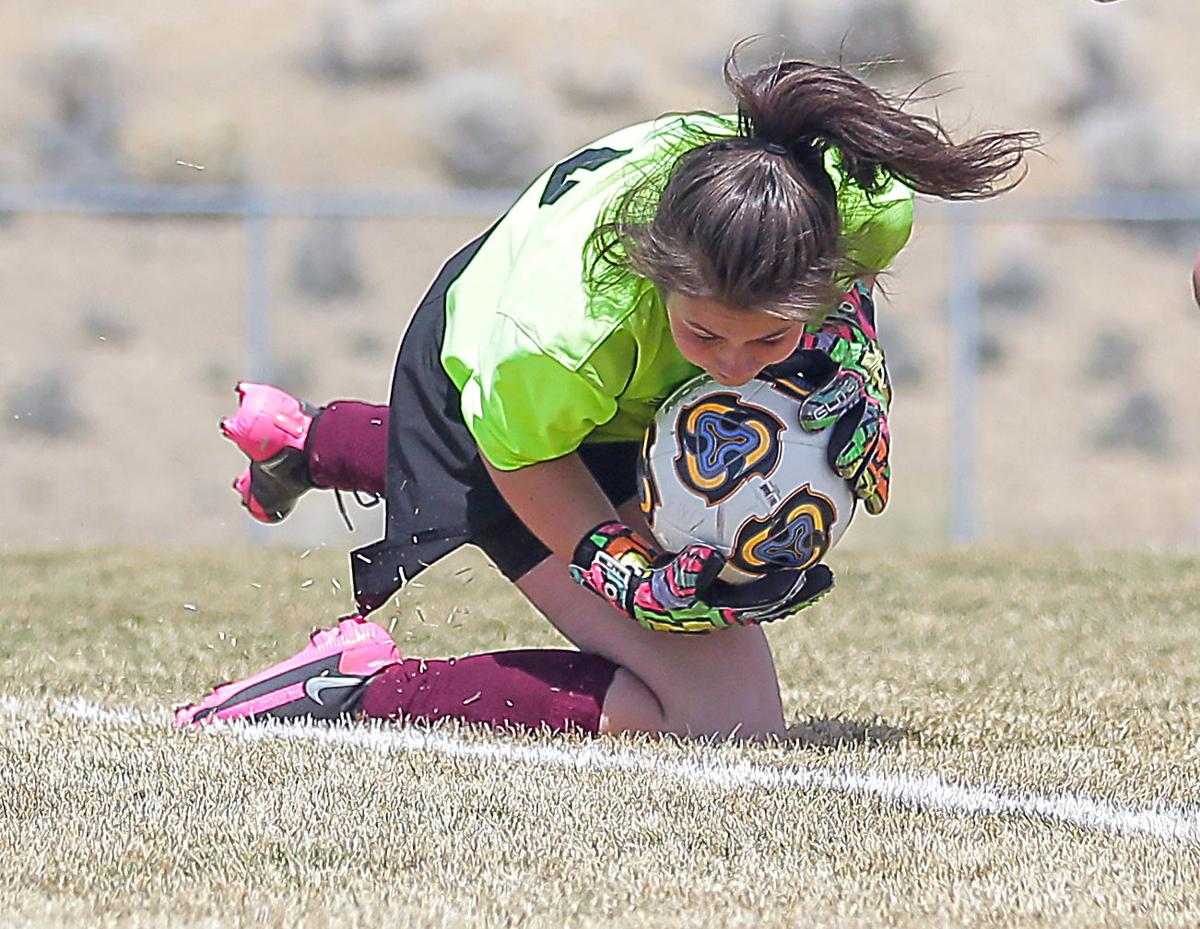 Elko's Elayna Orr made a diving save against Lowry on Wednesday, April 7, 2021, at Adobe Middle School. The No. 3 Lady Indians beat the No. 4 Lady Buckaroos by a score of 4-0 in the Division 3A North-East postseason matchup, Orr and the Elko defense pitching a shutout in the final game of her career, 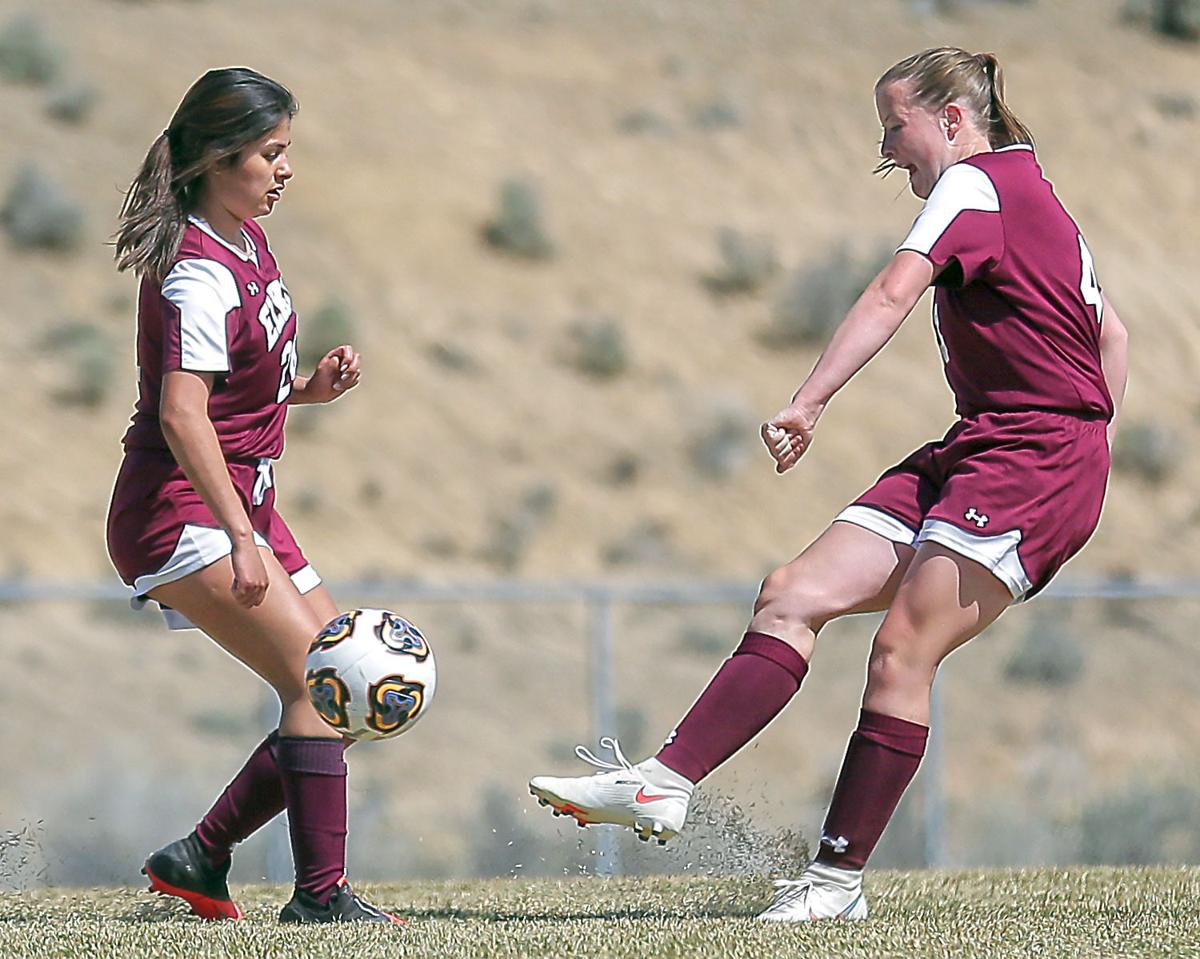 Elko's Ryinn Hatch, right, scores on a long-stance kick against Lowry on Wednesday, April 7, 2021, at Adobe Middle School. Her goal gave the Lady Indians a 2-0 lead, and they went on to win their postseason contest by a final score of 4-0.

For the first time since 2012, the Lady Indians won a playoff match.

On Wednesday, No. 3 Elko scored three goals in the first half and cruised past No. 4 Lowry by a final score of 4-0.

The Lady Indians created numerous opportunities throughout, beginning with a shot from sophomore Peyton Jacaway that was stopped by the Lowry keeper.

Another attempt from freshman Ryinn Hatch missed wide to the right, as did a try by junior Joselin Garcia.

Other kicks from senior Denise Vargas and sophomore Liz Luna were stopped by the goalie.

Garcia sent another good look wide to the right of the target, but she began Elko’s scoring just a moment later.

In the eighth minute, Garcia collected a rebound from an Elko shot that bounced off the crossbar — heading the ball into the net for a 1-0 lead.

Shots by Vargas and Hatch were saved by the keeper, and Luna missed wide to the left after a nice thru ball from Jacaway.

The Lady Indians went up two in the 12th minute, Hatch unleashing a frozen rope from long distance for a 2-0 advantage.

Orr recorded a save on Elko’s defensive end, and a shot by Garcia missed wide-right for the Lady Indians.

Freshman Abi Ramirez had a shot batted out by the keeper, and a shot from senior Jenna Kidwell flew over the frame.

Ramirez sent another ball wide to the left of the upright, and a free kick was saved.

Lowry’s best scoring opportunity went for naught in the 26th minute, Elko’s defense unable to clear the ball from the box.

The ruckus ended with a shot from senior Jordan Hornbarger that sailed wide-right.

Jacaway took a free kick that was deflected back, and sophomore Carly Nielsen’s follow was stopped.

Hatch missed wide to the left after an indirect kick from Jacaway, and Ramirez came so close to booking a goal on a shot that was tipped and a near follow.

Jacaway sent a long shot wide if the frame, and then she was fouled in the box by the keeper — who did not make a play on the ball — but the Lady Indians were only awarded an indirect kick and not a penalty kick.

Elko then earned multiple corner kicks but did not take advantage, and Lowry made a strong push down the right side but missed its shot wide-right.

With just a minute remaining in the half, Ramirez received a pass on the right wing and crossed her shot to the opposite post — scoring on the left side of the net.

Orr made sliding grab in front of Lowry freshman Alia Novi, and the Lady Indians came away unscathed after a tumultuous sequence.

Orr came forward, lost the ball and Aguilar raced toward the frame — Elko sophomore defender Bianca Gonzalez hustling back and helping out with a big deflection,

Jacaway missed a shot wide to the left after dribbling all the way across to the right, and Luna also sent a shot outside the left upright.

Vargas crossed a shot that was saved, Luna nearly following up with a score.

Hornbarger booted a ball wide to the right, and Elko freshman Emely Castaneda’s shot was saved after a nice pass from freshman Miranda Casas.

In the 53rd minute, the Lady Indians poured in the final goal of the contest — and it was a beauty.

Jacaway scorched a line-drive rocket from deep, the ball striking the twine for a 4-0 lead.

Dowd-Smith took a shot that bounced off a defender, and Orr made a save from a Lowry corner kick.

On the other side, Vargas had one her kicks stopped by the keeper and pushed two shots wide to the right.

As the half progressed, the Lady Indians showed great ball movement — toying with the Lady Buckaroos’ defense with short, quick passes.

Ramirez knocked an attempt off a defender, and Jacaway skipped a ball off the crossbar.

A try from Kidwell was saved, and Orr tallied a stuff against Novi on the other end.

Elko had a score taken off the board in the 67th minute, and earned a yellow card in the process after a collision with the goalie.

Orr came away from the frame for a scoop, and Nielsen had a shot saved by Lowry’s keeper — nobody home for the follow.

Ramirez had a shot saved, and Orr laid out for an awesome grab against a ball from Aguilar.

Elko’s passing continued to create looks, Jacaway hitting a shot high and Ramirez missing wide to the left — having another shot saved by the keeper after a steal and pass by Castaneda.

Senior Hailey Mariluch sent a kick over the frame and another ball by Zacchi Barajas-Villegas was stopped by the keeper.

No. 3 Elko’s offense started quickly — scoring three first-half goals — and the defense pitched a shutout in a 4-0 victory over No. 4 Lowry in the Division 3A North-East postseason round.

Job well done by Elko in its first postseason win in nearly nine calendar years, and kudos to the Lady Indians for managing, executing and completing what has proven to be a trying season.

Lady Indians erupt in 1st half for 5-0 win

ELKO — The Elko girls soccer team will host a No. 3 versus No. 4 postseason match.

ELKO — The Elko girls soccer team was under fire all game Saturday, but senior goalkeeper Elayna Orr gave the Lady Indians a chance.

DAYTON — After starting the season 0-2, the Elko girls soccer team has been on a roll.

Lady Indians bust scoreboard in a big way, racking up eight goals Saturday in an 8-1 win over Fernley and improved to 2-2 on the season.

Saturday's game between Spring Creek's and Elko's girls soccer teams was a competitive battle that came down to a foul and a penalty kick, lifting one team to 2-0 and dropping the other to 0-2.

ELKO — The Elko girls soccer team has not qualified for the postseason in any of the last-six season and, unfortunately, due to circumstances …

Elko's Elayna Orr made a diving save against Lowry on Wednesday, April 7, 2021, at Adobe Middle School. The No. 3 Lady Indians beat the No. 4 Lady Buckaroos by a score of 4-0 in the Division 3A North-East postseason matchup, Orr and the Elko defense pitching a shutout in the final game of her career,

Elko's Ryinn Hatch, right, scores on a long-stance kick against Lowry on Wednesday, April 7, 2021, at Adobe Middle School. Her goal gave the Lady Indians a 2-0 lead, and they went on to win their postseason contest by a final score of 4-0.