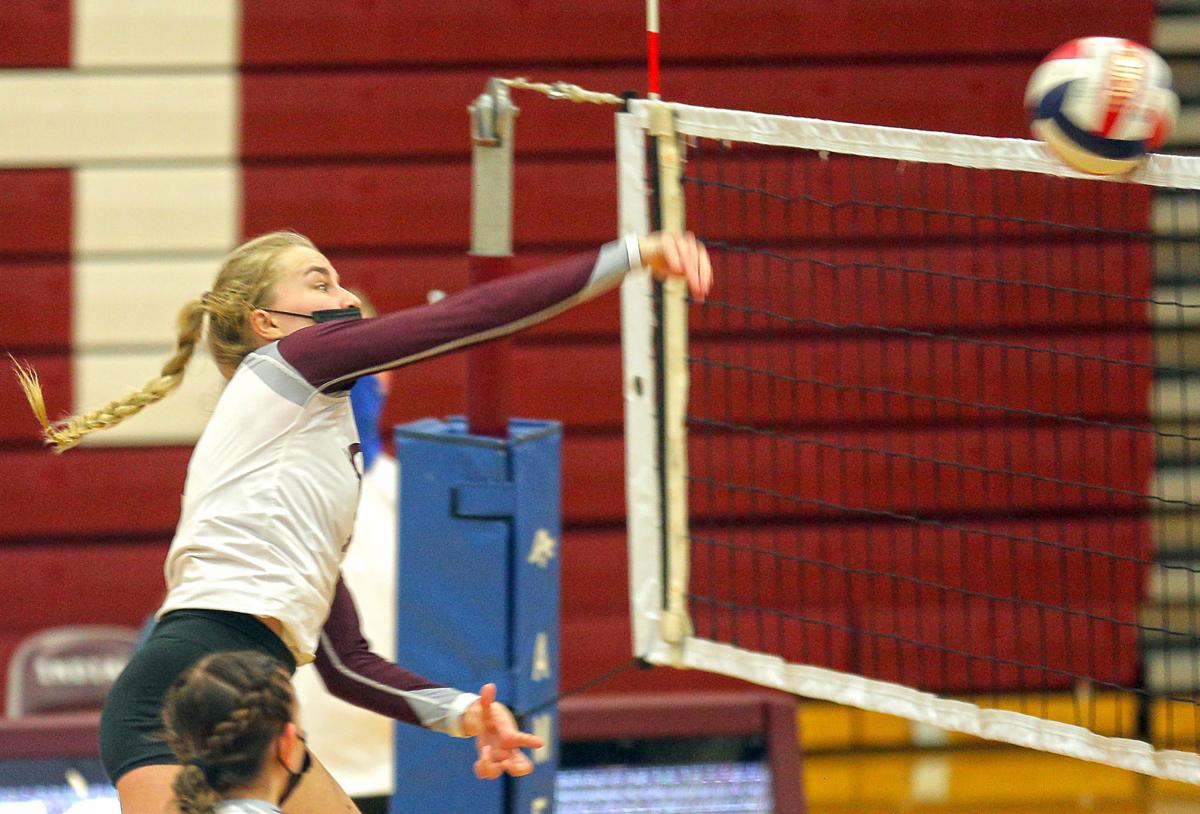 Elko's Hannah McIntosh drive a kill over the tape against Dayton on Saturday, April 3, 2021, at Centennial Gymnasium. 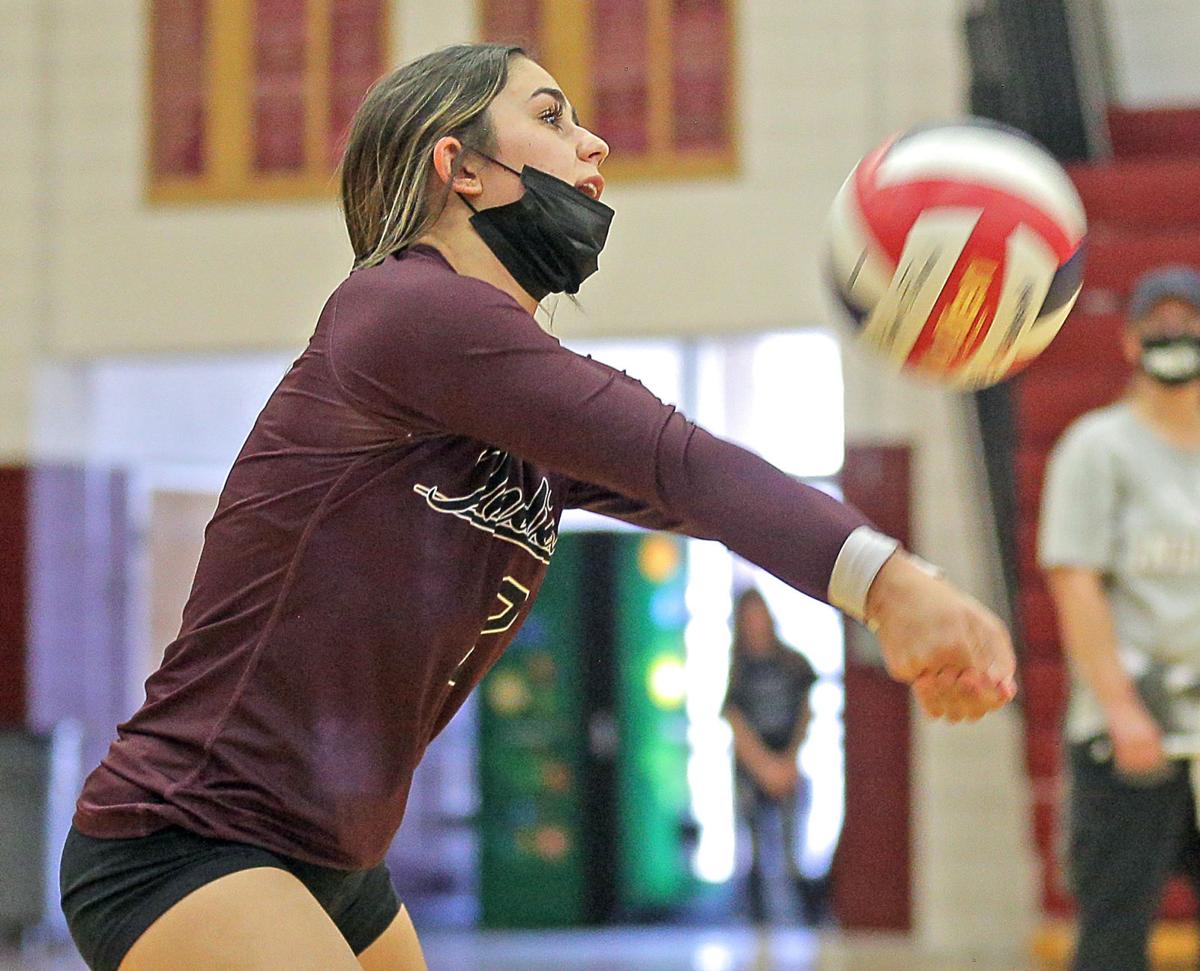 Elko's Shaylynn Ginnings makes a dig versus Dayton on Saturday, April 3, 2021, at Centennial Gymnasium. Ginnings served an ace for a 26-24 victory in the fourth set, the Lady Indians hanging on for a 3-1 win over the Lady Dust Devils.

ELKO — For two sets, the Elko volleyball team appeared poised for a three-set sweep at home against Dayton.

However, the Lady Indians were actually just a few points away from playing a do-or-die race to 15 in a potential fifth frame — hanging for a four-set, 3-1 victory over the Lady Dust Devils.

In the opening game, Elko jumped on top 13-3 — thanks to well-rounded contributions from blocks and kills by junior EmmaJay Larsen, an ace and a quick push from freshman Pacey Harris, a hammered shot from senior Hannah McIntosh and a short putaway and a ball on the sideline by junior Jeannie Anderson.

The advantage reached 21-8, including a kill and an ace by McIntosh, an ace from sophomore Lucy Salyer and a quick tip by Harris.

Dayton made a run — in large part due to Elko errors — but junior Ellen Wickersham put down a shot for a 23-15 lead.

A kill by McIntosh made the score 24-17, and the Lady Dust Devils hit a ball out of bounds to end the set.

The Lady Indians began the second game with another large streak, opening a 9-3 advantage.

Larsen tallied numerous putaways, Harris served an ace, Wickersham served an ac, McIntosh put a ball down off the tape, an ace by Salyer made the score 8-3 and Dayton hit a shot out of bounds.

Anderson booked multiple kills, but Dayton trimmed the deficit to two with kills from freshman Ayisha Agee and sophomore Hallie Peterson — the Lady Dust Devils dropping shots into holes in both the middle and on the back corners.

Wickersham started a three-point run for Elko with a shot on the sideline, Harris following an ace and Larsen scoring on a block.

A block from Peterson brought Dayton to within 16-10, but a kill of the Lady Dust Devils’ block by Salyer opened a 17-12 lead.

After a lift and a shot out of bounds by Dayton, Larsen’s putaway made the score 20-12.

Dayton scored three straight on a kill by senior Hailey Glynn and consecutive Elko miscues, but Salyer put a show down for a 22-14 advantage.

Dayton senior Maile Connor put away a ball, but Harris dropped a quick shot for Elko and a 23-15 lead.

Consecutive hitting errors by the Lady Dust Devils handed the Lady Indians a 25-15 win, placing Dayton on the verge of elimination.

Elko was off throughout the third set, falling behind 5-1 early — Glynn serving consecutive aces to start the frame.

Peterson ripped a kill and senior Makayla Larson chalked up an ace before Elko sophomore Allison Padilla put away a shot, McIntosh following with a crazy stab for a point.

However, Dayton took two in a row on a four-hit call and a net serve.

Anderson dropped a roll shot for the Lady Indians, but Connor notched a kill and a shot off the tape dropped for another point.

The teams traded points — Wickersham and Anderson killing balls for Elko — and a tip from Wickersham brought the Lady Indians to within a point.

Elko tied the game 11-11 with a putaway from Larsen and grabbed a 13-12 advantage on a kill on the line by Wickersham, but bad receptions led to the Lady Indians’ offense running out-of-system.

Peterson found a hole in the middle, and Dayton grabbed a 15-13 lead on an ace by Lawson.

Consecutive hitting errors knotted the tally at 15-all, and Dayton notched a wild slap for a point, Elko hit the antenna, Glynn fired an ace and a net violation gave the Lady Dust Devils a 19-15 lead.

After back-to-back net balls by Dayton, Elko pulled to within on an ace by Larsen but a net serve ended the momentum.

Elko began another streak with some crazy English by Harris on a ball that spun off the net and dropped, a kill by Anderson and an ace by Salyer for a 21-20 lead.

A long-out by Dayton made the score 22-20, but the Lady Indians faltered when the door was open for slamming.

A line violation by Elko was followed by an ace from Dayton sophomore Riley Glynn, an Elko net ball giving the Lady Dust Devils a 23-22 lead.

Miscommunication led to another Dayton point, and Elko lost the set 25-22 — playing extremely tight and panicky down the stretch.

In the fourth set, the Lady Indians showed both their good and bad moments in a seesaw tug-of-war.

The action was back-and-forth throughout.

Elko picked up some steam toward the end of the game — opening a 23-19 lead — but the Lady Indians once again played stiff when trying to land the knockout blow.

However, the Lady Indians gained some big plays with kills from McIntosh, an ace by sophomore Aurora Eklund and a push by Harris to a hole along the sideline between the front and back rows.

Dayton responded and was mere points away from forcing a fifth set — the score gridlocked at 24-all — but Wickersham placed a well-timed tip.

With Elko on top, 25-24, senior libero Shaylynn Ginnings ended the match with an ace.

If the Elko volleyball team wishes to play for the 3A North-East title, the scenario is simple — win.

SPRING CREEK — Experience is key, and when in doubt — unleash the thoroughbred, senior Kylee Dimick.

ELKO — For five matches, the Elko volleyball team posted a perfect record but the streak did not reach six.

Elko's volleyball team opened the season with a pair of four-set victories, the latest over Spring Creek — which splits its first-two matches after a 3-1 victory at Lowry.

Elko's volleyball season will be one of changes, as head coach Jordan King takes over for her first year at the end of the bench. The Lady Indians, through graduation and voluntary departures, will also hit the court with a young, inexperienced unit.

Elko's Hannah McIntosh drive a kill over the tape against Dayton on Saturday, April 3, 2021, at Centennial Gymnasium.

Elko's Shaylynn Ginnings makes a dig versus Dayton on Saturday, April 3, 2021, at Centennial Gymnasium. Ginnings served an ace for a 26-24 victory in the fourth set, the Lady Indians hanging on for a 3-1 win over the Lady Dust Devils.