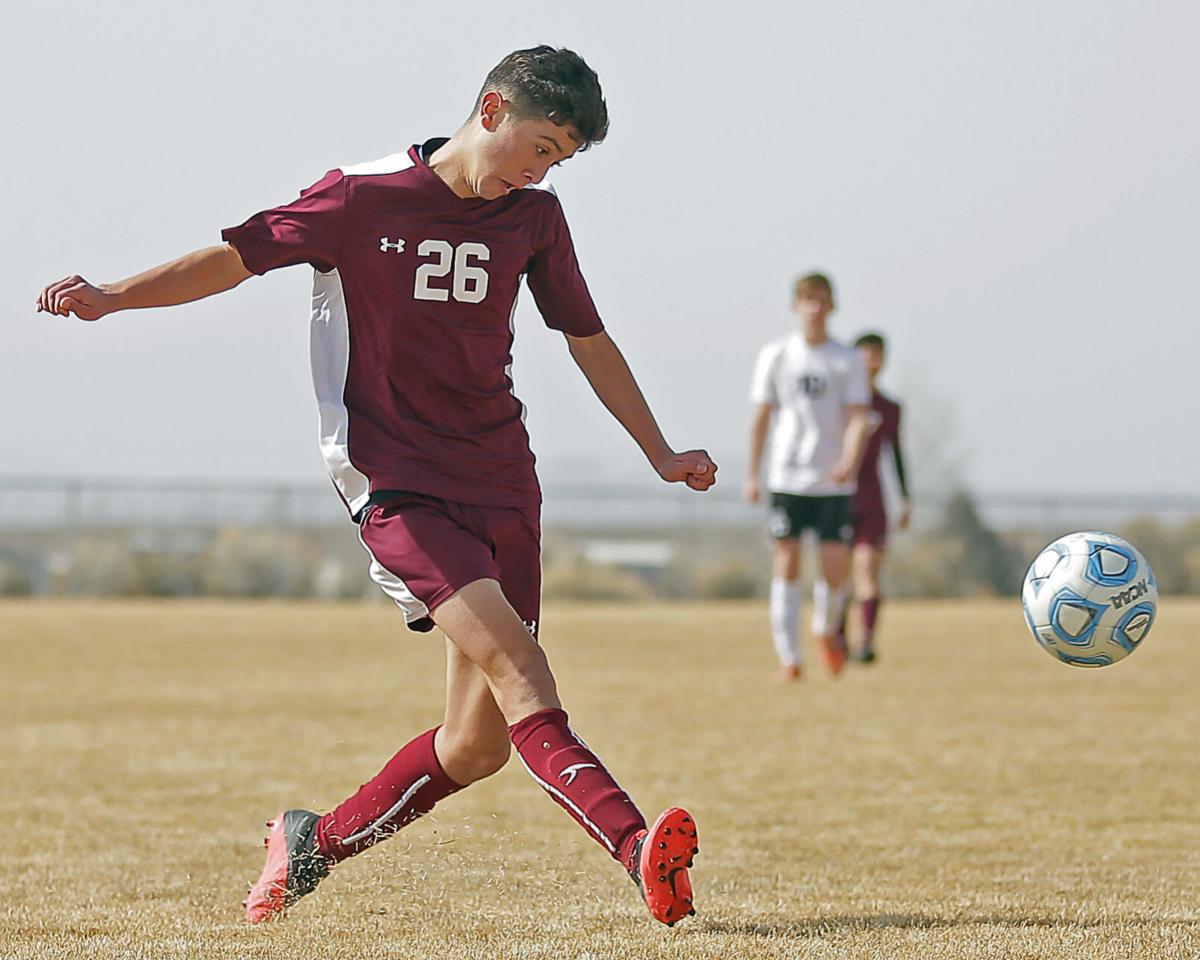 Elko's Nico Avila takes a shot during the first half against Spring Creek, on Saturday, March 6, 2021, at Adobe Middle School. Avila scored a pair of goals in the Indians' 8-1 victory. 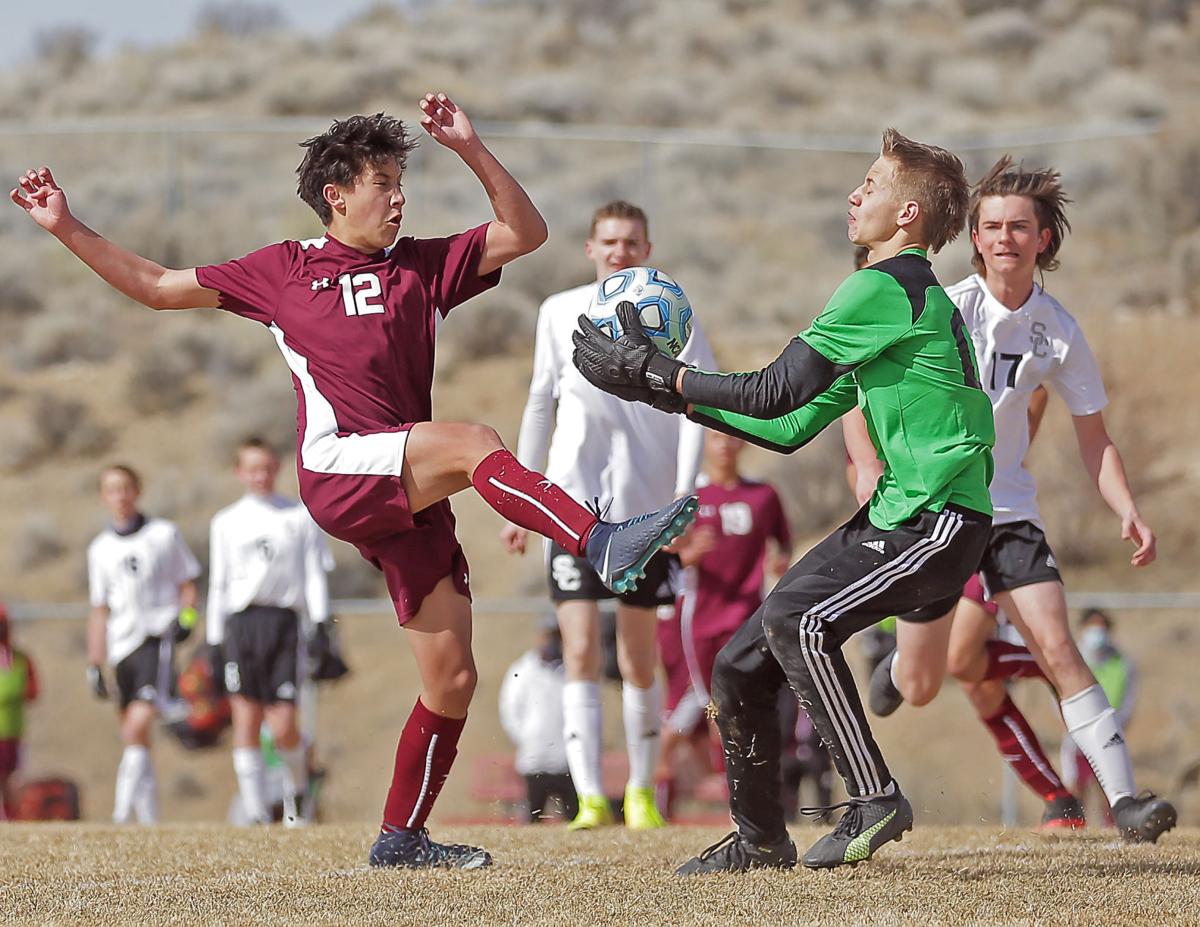 Spring Creek goalkeeper Tarron Metz advances for a save in front of Elko's Austin Weight during the first half Saturday, March 6, 2021, at Adobe Middle School.

ELKO — Through two games, the Elko boys soccer team has been an offensive juggernaut.

Following Friday’s 8-0 mercy-rule win over Fallon, the Indians improved to 2-0 against Spring Creek — dropping the Spartans to 0-2 on the season — with another explosion of scores in an 8-1 victory on Saturday.

The zeros went early in the contest, Elko grabbing a 1-0 lead in the fourth minute on a penalty kick by junior Freddy Cervantes.

Freshman Marcos Carlos nearly added another moments later, his kick trickling wide to left on a shot from the right wing.

Senior Jose Ventura came close to giving the Indians a two-goal lead on a cross pass from freshman Nico Avila, but the open look was missed.

Spring Creek earned a corner kick in the ninth minute but did not manage to net the ball, and Carlos put Elko on 2-0 in the 10th minute — Ventura making a nice drop pass for the assist out toward the 18-yard box.

Cervantes kicked a shot that missed wide to the right, and junior Osvaldo Orozco’s attempt at the frame was saved by the Spartans’ sophomore goalie, Tarron Metz.

In the 15th minute, Spring Creek senior Darryn Spring took a free kick and the Spartans earned another corner kick but were unable to take advantage as the ball bobbled around several times before being cleared by Elko’s defense.

The Spartans nearly cut the deficit in half on a breakaway but missed wide to the left, and the Indians had a miscue of their own as Cervantes was ahead of the pack in a one-on-one with the keeper — his chip shot skipping high.

Carlos also drilled a ball over the crossbar in the 18th minute, and Avila missed with the left in the 25th minute.

However — in the 26th minute — the Indians went up 3-0 on a goal by Orozco as he crossed a shot from the left wing to the right corner of the frame.

Elko earned a free kick in the 29th minute, but Ventura’s shot clanged off the crossbar and back into play.

In the 35th minute, the Indians rolled to a 4-0 advantage on a rocket ball from long distance by Avila — his kick set up by an assist from Ventura.

Elko came close to a 5-0 first-half lead, but Avila’s kick was saved with a great stop by Metz.

Spring Creek missed a shot wide to the left on a throw-in, and Ventura’s ball on the other end was stopped by Metz.

In the 48th minute, Elko went up five with a second-chance score by Avila — who collected a rebound from a corner kick and poked a ball through multiple defenders.

Just four minutes later, Carlos crossed a goal from the right to left for a 6-0 advantage.

In the 62nd minute, Elko was given a foul in the box — giving the Spartans a penalty kick.

The first ball — yes, the first — off the foot of senior Tyler Ley was saved by Elko freshman keeper Hector De La Cruz.

However, it was ruled that he stepped off his line before the ball was struck — Spring Creek earning another chance.

On the second PK, De La Cruz also stamped his hands on Ley’s kick but the ball bounced free and spun into the frame on the left side — making the score 6-1.

Just a minute later, the exclamation mark was added by sophomore Austin Weight — who worked the middle of the field and bent the ball like Beckham.

The shot started toward the right side of the net and careened to the left corner, leaving the keeper no chance.

On Friday, the Spartans lost their home and season opener to Lowry by a final score of 7-1.

Spring Creek’s lone goal of the game was scored by sophomore Spencer Anderson.

Both teams will play on the road Wednesday, the Indians raveling for a 2 p.m. kick at Fernley — the Spartans kicking off with the Greenwave at 2 p.m., in Fallon.

Detroit Lions embrace being underdogs in 2021

What will it take for the Giants to take down the Dodgers?

What will it take for the Giants to take down the Dodgers?

What impacted the line move on the Dodgers?

What impacted the line move on the Dodgers?

In the Division 3A North-East boys championship soccer game, 80 minutes was not enough time to settle the dispute.

Elko's Nico Avila takes a shot during the first half against Spring Creek, on Saturday, March 6, 2021, at Adobe Middle School. Avila scored a pair of goals in the Indians' 8-1 victory.

Spring Creek goalkeeper Tarron Metz advances for a save in front of Elko's Austin Weight during the first half Saturday, March 6, 2021, at Adobe Middle School.