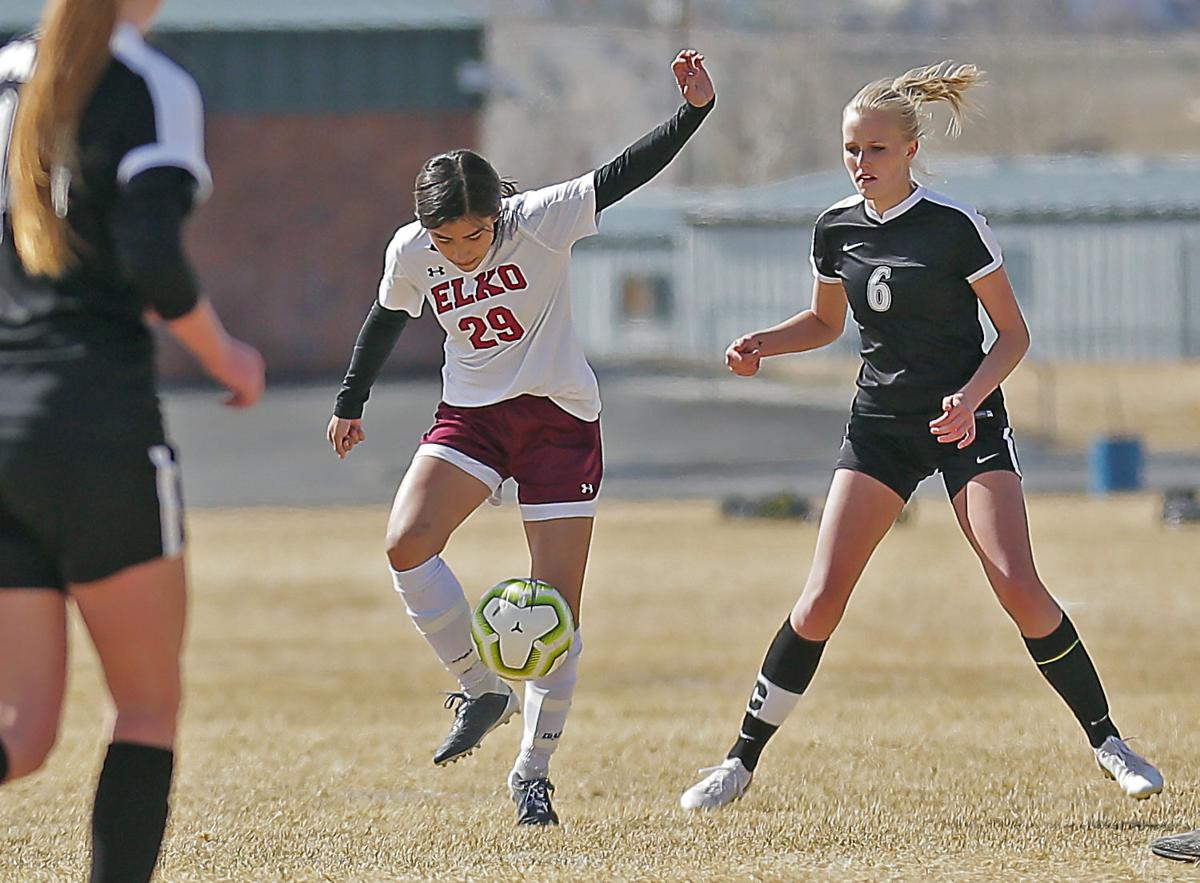 Elko's Joseline Garcia (29) gains possession of the ball near midfield in front of Spring Creek's Lydia Binger (6) on Wednesday, March 24, 2021, in Spring Creek. Garcia scored one of Elko's two goals, and the Lady Indians handed the Lady Spartans their first loss of the season by a score of 2-1. 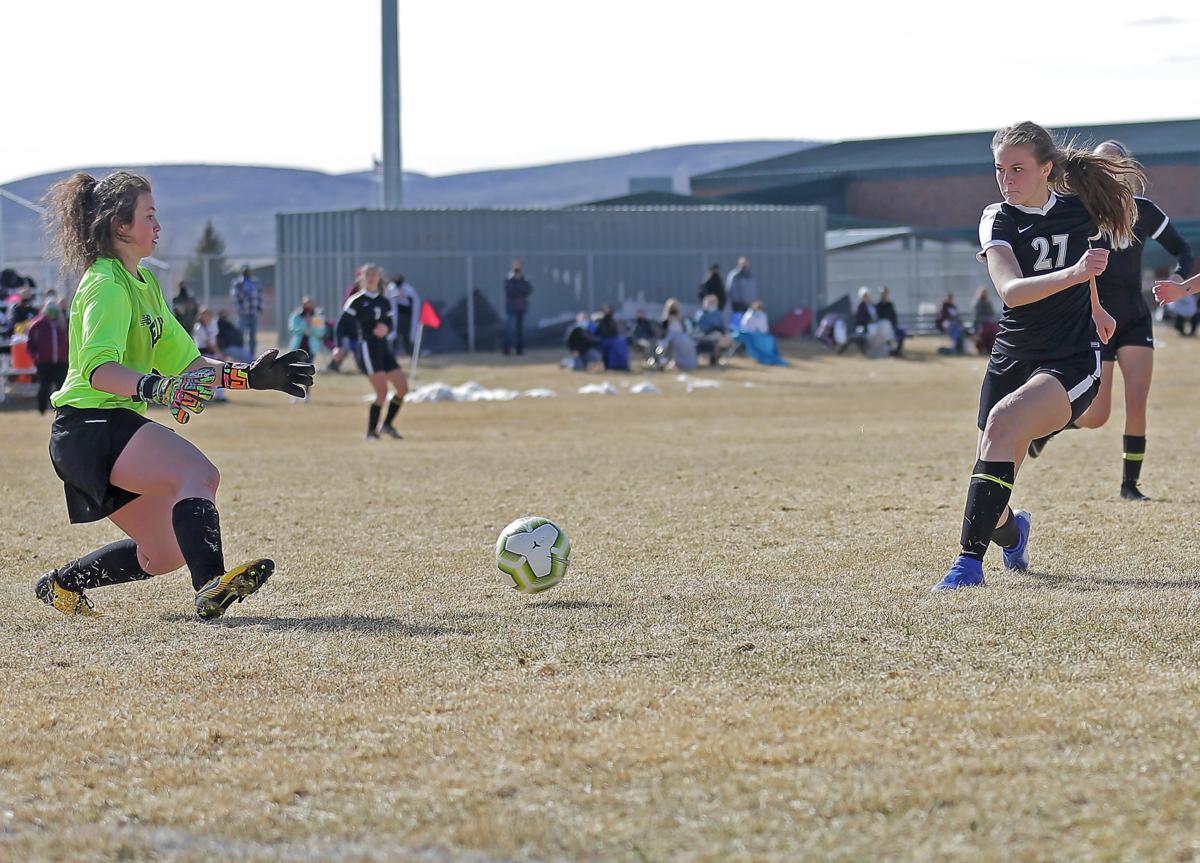 SPRING CREEK — Wednesday’s match between the Elko and Spring Creek girls soccer teams was a defensive struggle of attrition and perseverance.

Neither team managed a goal in the first half, but three goals were posted after the break — two for the visiting squad and one for the hosts.

The Lady Indians took a 2-0 lead and held on late as the Lady Spartans made numerous advances toward the Elko frame — Spring Creek knocking home one ball but finding itself unable to cash the equalizer.

Elko improved to 4-3 on the season with a 2-1 victory, handing Spring Creek (6-1) its first and only loss of the season.

Toward the end of the first half, the Lady Indians found a look — the ball by freshman Emely Castaneda saved by senior keeper Betsy Fellows.

On the other end, just before the break — Spring Creek senior Chloe Zuraff made a break of her own — a fast break.

As she charged toward the ball for what would have been the go-ahead score, Elko senior goalie Elayna Orr came away from the frame and scooped up the ball just before Zuraff could strike.

At the half, it was a game of zeros.

To start the second period, Spring Creek made a throw-in and senior Hailee Dixon struck the ball after a deflection but the shot was saved at the left post by Orr.

Orr made another diving snag in traffic right before junior Payge Walz could stamp her foot on the ball.

The Lady Spartans found another opportunity from a diagonal pass by sophomore Avery Beatty to junior Myah Baisley, whose shot flew high over the frame.

Elko nearly found a go-ahead score as an attempt by Spring Creek inside its own box resulted in a whiff, but senior Lydia Binger cleared the ball from harm.

Walz dribbled the ball freely down the right wing and behind Elko’s defense but her shot was batted away by Orr, as she charged forward and snagged the ball as it approached Baisley for a potential rebound boot.

As the 55th minute approached, a play changed the complexion of the contest.

Elko senior Keyona Gough won possession of the ball on the left sideline and drive down the field, sending a cross pass to the middle of the box — intended for junior Joseline Garcia.

Spring Creek’s defender who was guarding Garcia had the pass bounce off her left leg and ricocheted the ball into the Lady Spartans’ frame for an own-goal.

Just six minutes later, the Lady Indians earned a free kick from the right wing — sophomore Peyton Jacaway sending the ball toward the heart of the box.

The ball deflected off a Lady Spartan toward their own frame, bounced off of Fellows and back out into the crowd — a defender and Garcia going for kicks at the same time.

Garcia’s poke into the frame opened a 2-0 lead in the 61st minute.

Elko would need both of its scores.

Here came Spring Creek, playing with a renewed vigor — knowing it needed to put the pressure on Elko’s defense.

Sophomore defender Arena McDermott made a steal and dribbled down the right sideline and sent a cross into the box, junior Riley Moon taking a shot as Orr stepped forward.

The ball beat Orr to her left but narrowly missed outside the left upright.

In the 71st minute, the Lady Spartans sent a long ball down the field — Elko’s defender beat on the play.

Orr broke away from the frame and laid out for a grab, but she snagged the ball outside the box and drew a yellow card.

The Lady Indians inserted sophomore Aryan Hayes at goalie, but Spring Creek was unable to take advantage as the free kick by Lamb was booted back the other way by Elko freshman Sarah Schwandt.

However — in the 75th minute — an Elko defender headed the ball toward the Lady Indians’ frame and as Hayes attempted to scoop the ball from her knees it bounced free.

Sophomore Kiana Green — a call-up from the junior varsity — gathered the loose ball and lined her shot into the net, knifing the deficit in half.

With less than 10 minutes on the clock, Spring Creek trailed 2-1.

On the other end, Elko freshman Ryinn Hatch found some breathing room and thumped a kick that was saved by Fellows.

As the end of the game neared, Elko’s backrow defense became scattered — allowing for scoring opportunities.

The Lady Spartans earned multiple free kicks from near midfield, but the shots from sailed high and over the crossbar.

Beatty showed some remarkable footwork on the left wing and juked three or four Elko defenders — freeing herself for a clean look — but her ball crossed the box and was sent high over the top-right corner.

Elko took some goal kicks near the end of regulation, Spring Creek unable to seriously threaten to tie the game in the final minute.

The whistle sounded, and Elko hung on for a 2-1 victory and handed Spring Creek its first loss of the year.

“We panicked a little toward the end, but the girls got the win,” said Elko coach Michelle Nicholls.

“Every time we play (Elko) — no matter which team is better or worse — it’s a battle. The games are always going to be close and exciting. There were no dull moments. We had some bounces not go our way today,” said Spring Creek coach Kami Crowe. “The last time we played, we had some things go our way and Elko didn’t have some things go their way. I told the girls that it’s OK. Every team is going to lose at some point. I thought we had the possession — for the most part — and we had some chances, but we didn’t take advantage of those.”

Spring Creek (6-1) will face its most crucial contest of the season, taking on the Lady Greenwave (5-1 as of Wednesday) at 11:45 a.m. Saturday, in Fallon.

In the first meeting, the Lady Spartans scored three second-half goals in a 3-1 victory on March 12, in Spring Creek.

During the first matchup, the Lady Indians lit up the scoreboard in an 8-1 win on March 13, at Adobe Middle School.

Despite getting a late start to the “fall” soccer season — which is currently underway in the springtime — Spring Creek High School senior Mollie Spillman didn’t need a 12th-grade highlight reel to etch out her collegiate future.

Elko's Joseline Garcia (29) gains possession of the ball near midfield in front of Spring Creek's Lydia Binger (6) on Wednesday, March 24, 2021, in Spring Creek. Garcia scored one of Elko's two goals, and the Lady Indians handed the Lady Spartans their first loss of the season by a score of 2-1.