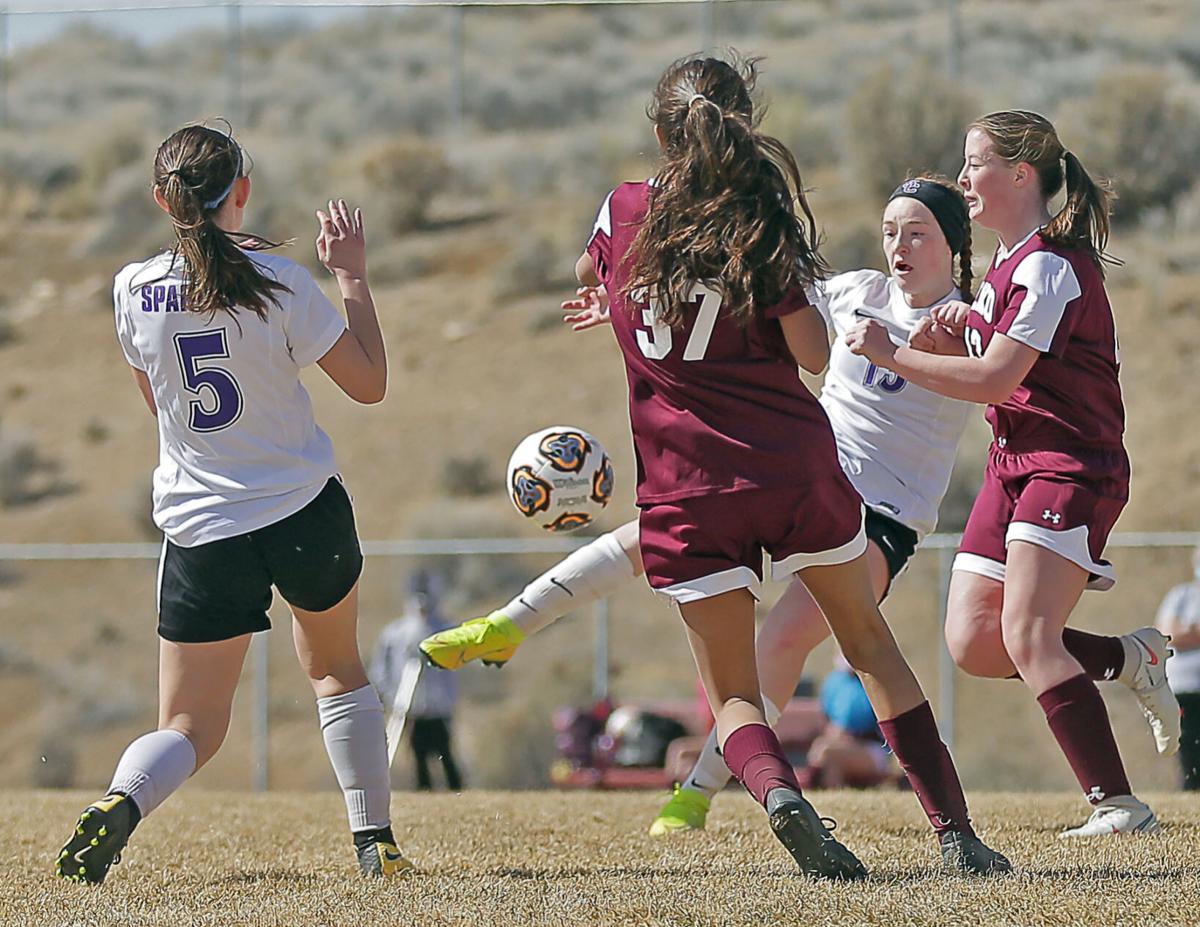 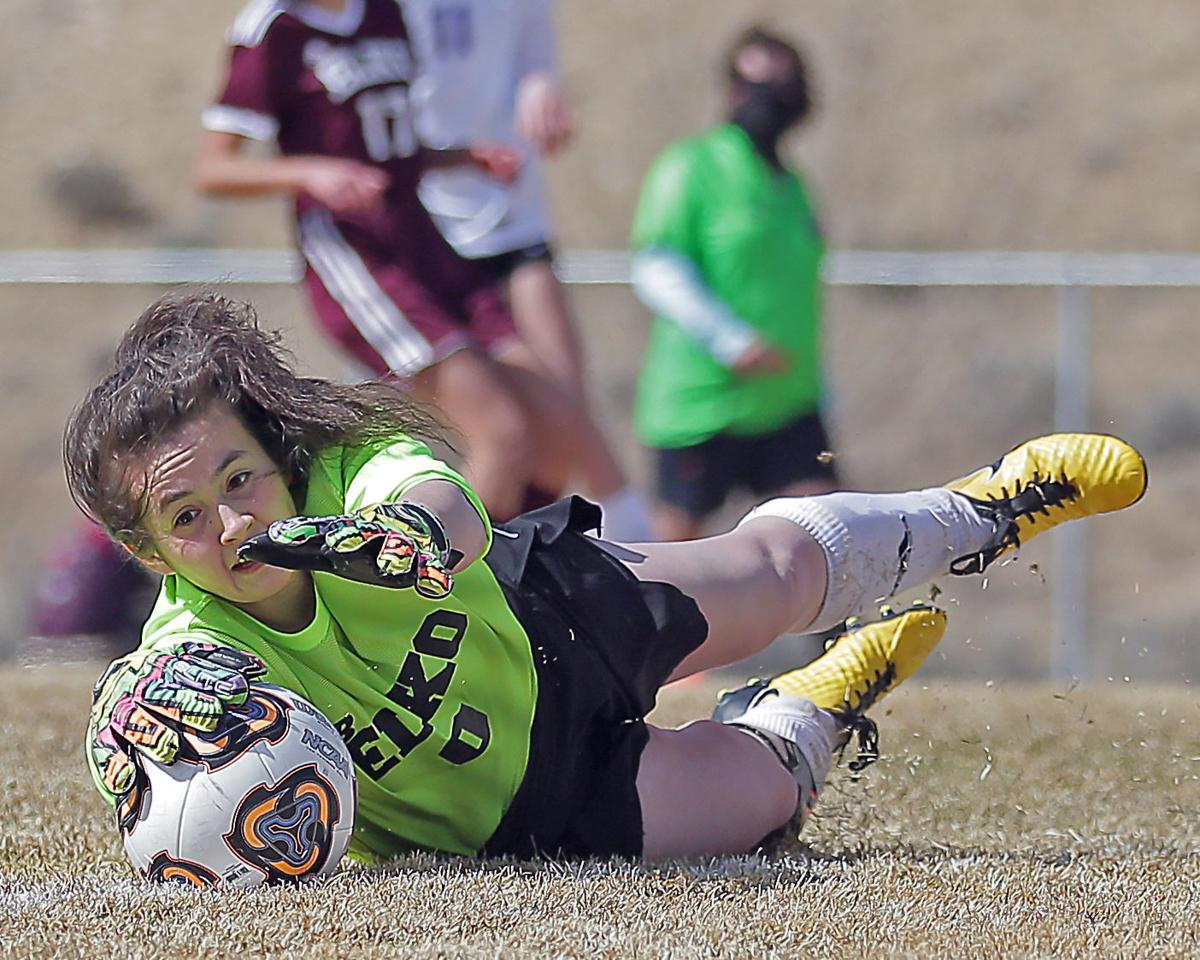 ELKO — For 63 minutes, Saturday’s soccer match between the Elko and Spring Creek girls was a nail-biting defensive struggle.

However, an Elko foul in the box dictated the outcome.

In the 63rd minute, Spring Creek senior Chloe Zuraff was fouled on her way toward the Elko frame — earning a penalty kick after remaining on the grass for a few moments.

Junior teammate Shyann Lamb used the opportunity to give her team the lead and, ultimately, the victory.

On the penalty kick, Lamb worked her kick across her body — beating Elko’s keeper to the goalie’s right — ripping the twine with a slid kick into the left side of the net.

In the early portion of the game, Spring Creek attacked with regularity — the Lady Spartans dominating the time of possession and finding numerous corner kicks, free kicks and shots on-goal.

To the Lady Indians’ credit, they stiffened when challenged and used superb play from senior goalie Elayna Orr to keep the Lady Spartans at bay.

On the other end, Elko’s first chance to either score or set up a teammate for a shot went for naught as a free kick from sophomore Peyton Jacaway was saved — the ball bending around Spring Creek’s wall — senior keeper Betsy Fellows making the snag.

Orr made a great diving stop in the 13th minute, now-sophomore Avery Beatty — who played for the Lady Indians as a freshman — driving an open look for the Lady Spartans into Orr’s gloves.

Spring Creek botched a number of corner kicks, either failing to score once the ball was in play or sending the kicks over intended teammates and out of bounds due to the driving wind.

In the 22nd minute, Orr made another stop on a shot by Spring Creek junior Ashton Moon — duplicating the feat once again just a minute later.

From another Spring Creek corner kick in the 28th minute, Elko survived a furious volley — the bouncing around and off both offenders and defenders in rapid succession — the Lady Indians dodging another bullet moments later on a crazy sequence of kicks, deflections and headers before finally clearing the ball.

From a free kick by Lamb from about three-quarters field, Zuraff found an opportunity but the ball missed wide.

At the break, the game was scoreless.

After swapping sides of the field, Elko found offensive chances more often once it was trying to advance the ball without having to worry about the constant headwind.

However, the Lady Indians did not take advantage of consecutive corner kicks.

Elko sent a solid diagonal pass to sophomore Ashley Jimenez but did not capitalize, and Spring Creek nearly found the net with a clean look on the right side — Orr making another save.

The Lady Indians came close to booking the first score of the contest with a ball to freshman Abigail Ramirez, but Spring Creek senior sweeper Lydia Binger recovered and made a big stop before the goalie had to stop the shot.

Fellows came up with some solid saves on shots by Jacaway and fellow sophomore Dalyla Gaytan.

In the 59th minute, she made another big stop — Ramirez sending a shot that was on-point over the top of the crossbar.

Orr made a nice save on the other end, stopping a near goal by Zuraff just moments before what proved to be the game-changing foul.

Lamb’s PK in the 63rd minute served as the difference, lifting Spring Creek to a 1-0 victory.

According to Crowe’s stats from her bookkeeper, the Lady Spartans took eight shots and limited Elko to six — Fellows finishing with four saves for Spring Creek.

“I don’t know how many shots we took. I think we had more than that,” Crowe said. “In the beginning, we were firing at their goalie and she made some great saves.”

On Friday, the Lady Spartans won their season opener with ease on the road — defeating Lowry 4-0, in Winnemucca.

In the 32nd minute, Beatty dribbled from beyond midfield for the game’s first goal.

“She split three defenders and wound up with a one-on-one with the keeper,” Crowe said. “The goalie dove and she went around her for the goal.”

In the second half, the Lady Spartans wasted no time to add an insure score — junior Myah Baisley scoring on an assist from Zuraff.

Spring Creek grabbed a 3-0 cushion in the 57th minute, Beatty booking her second goal on a Baisley assist.

The capper was a header from Zuraff from a corner kick in the 65th minute, giving the Lady Spartans the eventual final score of 4-0.

“We did the short dribble in from the corner. Lamb dribbled in, and Chloe took a shoot that was deflected and she headed in the rebound,” Crowe said. “Chloe scored another goal that was taken away because of a foul, or we would have won 5-0.”

After Saturday’s loss, the Lady Indians fell to 0-2 on the season — dropping their first game of the year by a final score of 3-0 on Friday, in Fallon.

Elko (0-2) will looks for its first win of the season against Lowry at 2 p.m. Wednesday, in Winnemucca.

The Lady Spartans (2-0) will play their “senior day” game against Fallon at 2 p.m. Friday, in Spring Creek, when they will do a tribute to the late Ethan Lulay — a former classmate and Class of 2020 graduate.

The Lady Spartans are playing for pride with no state championship on the line but a team that would have potentially reached the big tourney.

ELKO — The Elko girls soccer team has not qualified for the postseason in any of the last-six season and, unfortunately, due to circumstances …

The Lady Spartans got back to basics — simplifying the game with fundamentals — and flurried with three second-half goals on their senior day, which they dedicated to the late Ethan Lulay, a Spring Creek High School Class of 2020 graduate.

Lady Indians bust scoreboard in a big way, racking up eight goals Saturday in an 8-1 win over Fernley and improved to 2-2 on the season.

DAYTON — After starting the season 0-2, the Elko girls soccer team has been on a roll.

ELKO — The Elko girls soccer team was under fire all game Saturday, but senior goalkeeper Elayna Orr gave the Lady Indians a chance.

SPRING CREEK — Playing its first game of the second half of the season, the Spring Creek girls soccer team did what it had done through five c…

Despite getting a late start to the “fall” soccer season — which is currently underway in the springtime — Spring Creek High School senior Mollie Spillman didn’t need a 12th-grade highlight reel to etch out her collegiate future.