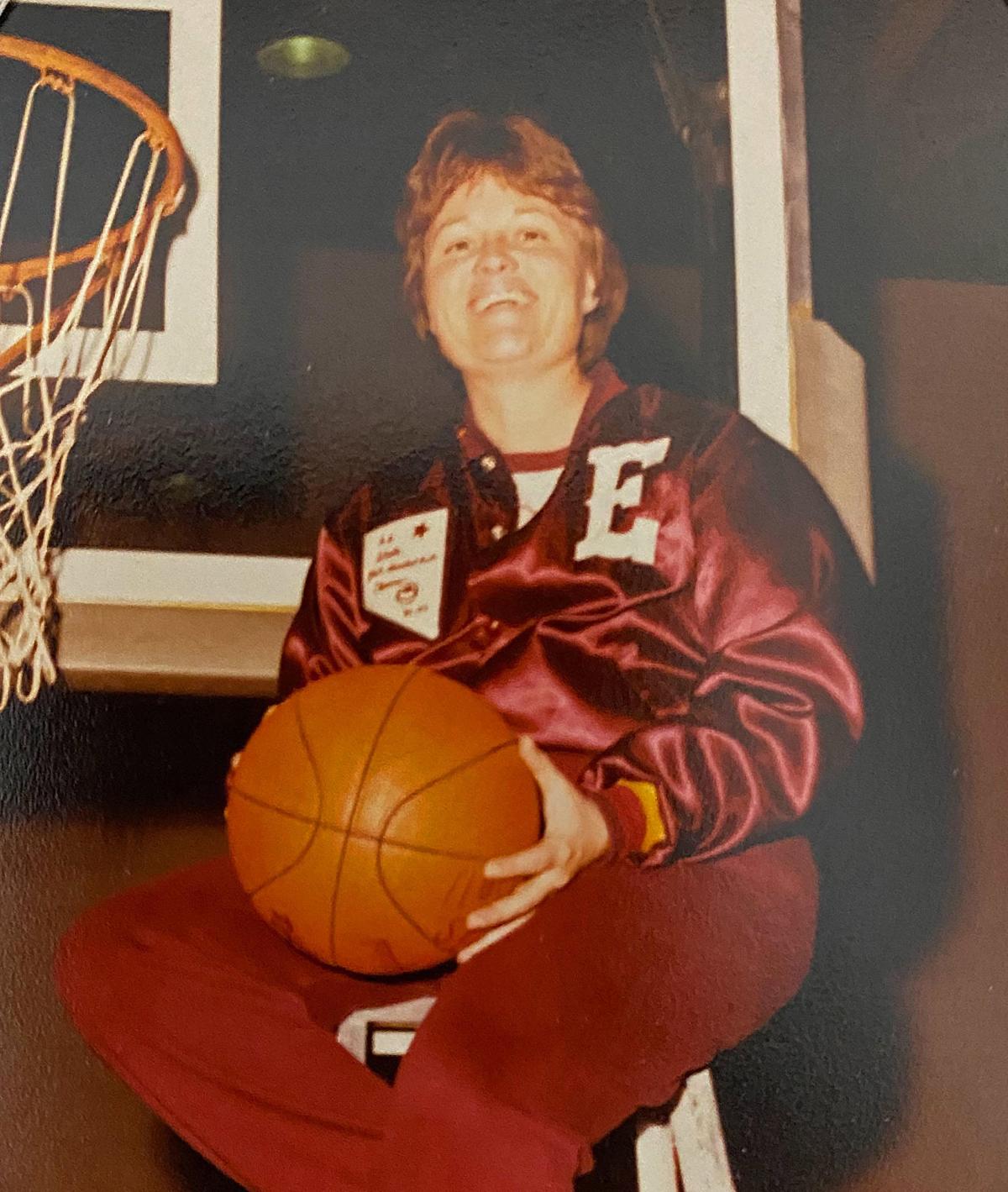 Former Elko head girls basketball coach Lynette Davis is shown on a ladder with a ball near the rim. In her career, she won 563 and claimed eight state championships across the 1A, 2A and 3A divisions. Davis is retiring after a 49-year journey with the Elko County School District as a teacher, coach, administrator and a mentor. 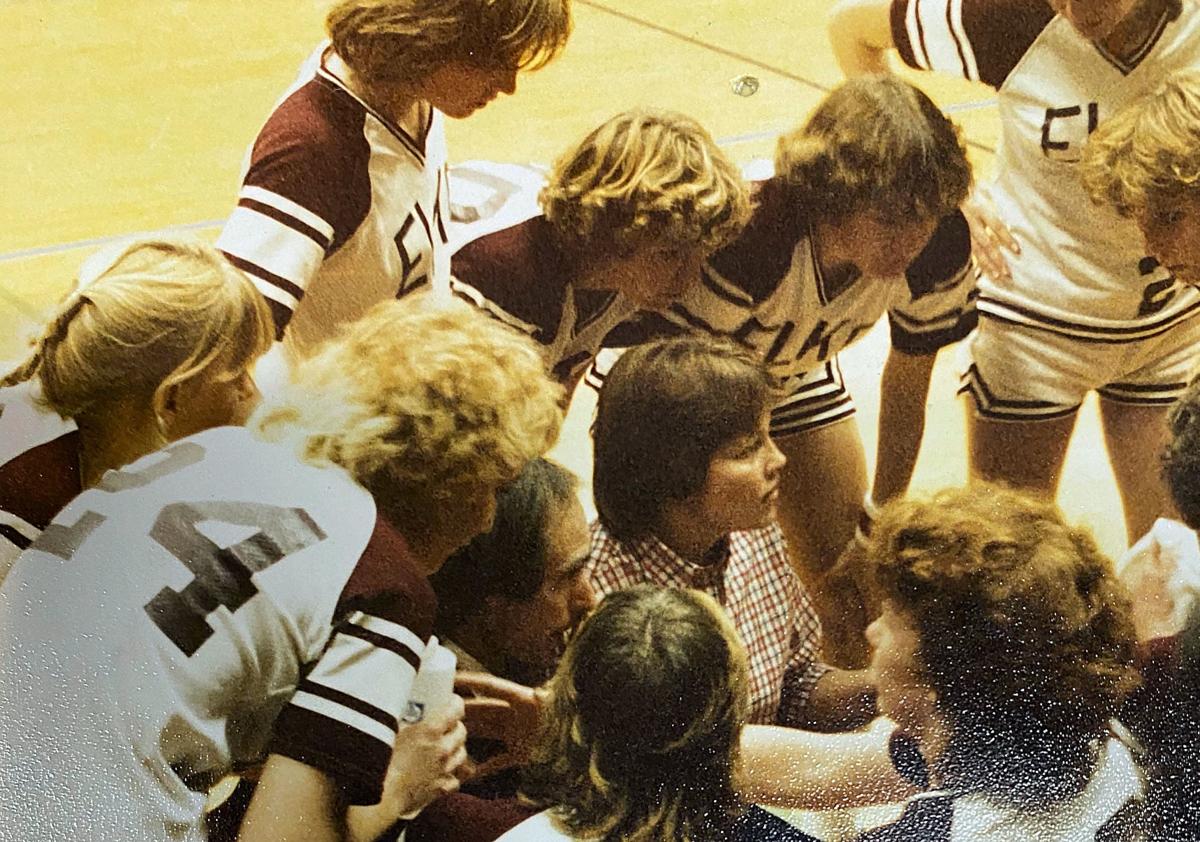 Head coach Lynette Davis, center, talks to a former Elko High School girls basketball team during a timeout. Davis is retiring after 49 years with the Elko County School District, a coaching career marked with 563 wins, eight state championships and lasting memories she leaves as a teacher, coach, administrator and a mentor. 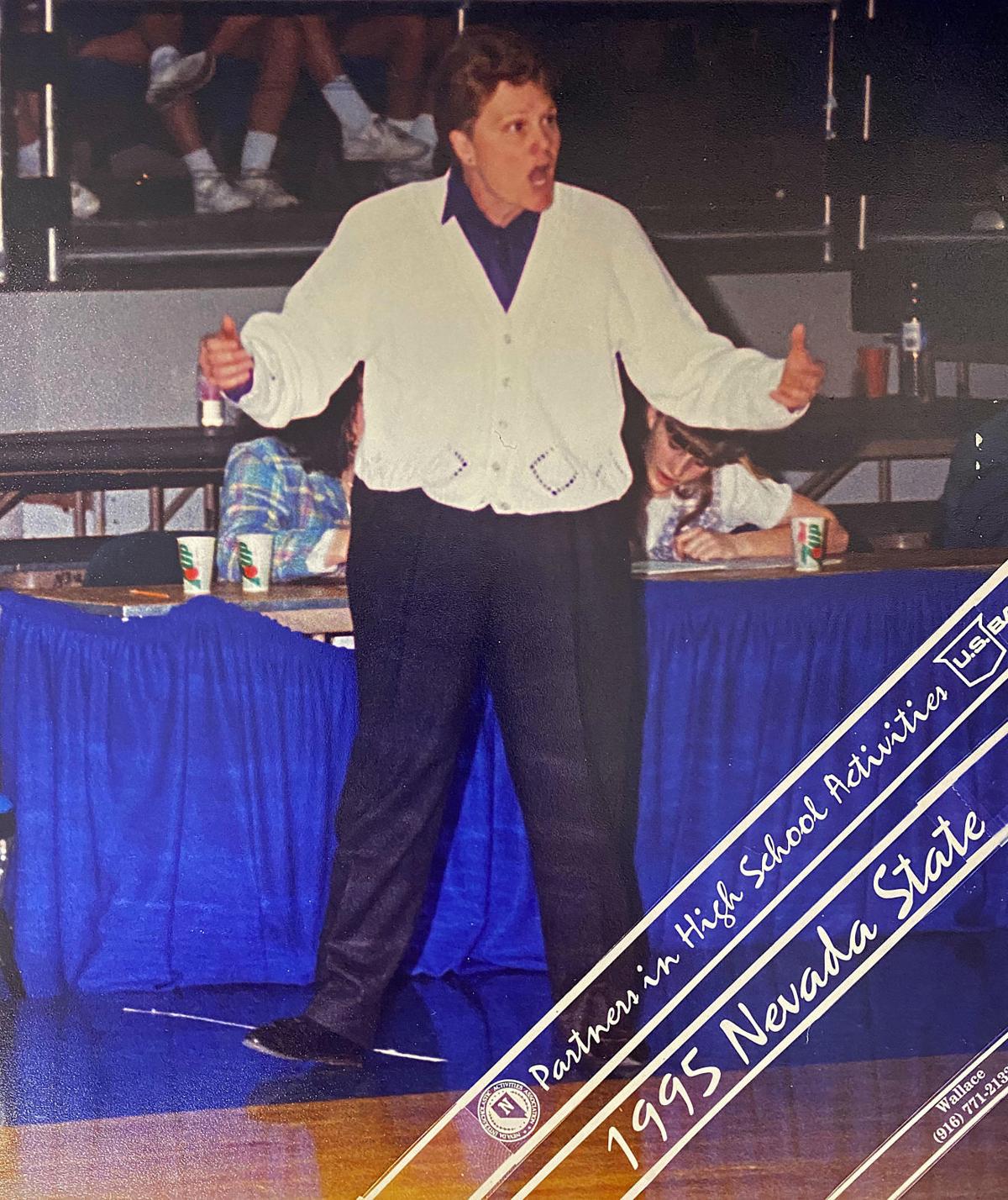 Former Elko girls head basketball coach Lynette Davis gives instructions to her team during the 1995 Division 3A Nevada State Girls Basketball Championships. Davis and the Lady Indians repeated as the 3A state champs, capping her eight-state titles as a coach across three divisions.

ELKO — In life, fortunes come and go, careers forged and forgotten, and records created just to be broken again, but a select few seem to truly etch their mark in the monument of human history that is never to be forgotten or removed because of the impact they made on the lives of others.

Elko High School’s Lynette Davis is one of those people as she ends a remarkable 49-year career with the Elko County School District as not only a teacher, coach and administrator, but more importantly as a mentor, mother-figure, pioneer and hero to hundreds and thousands that had either a moment or a lifetime to learn from this remarkable servant leader. Davis, who started teaching right after graduating from Brigham Young University in Provo, Utah, at Carlin High School in the fall of 1971, said she toyed with the decision to retire for a couple of years. This past fall, she made the decision to retire from her teaching position and as EHS athletic director, a post she has held since 2003.

Davis’ successes as a Nevada’s first great girls basketball coach, and possibly the greatest ever, are well documented with records for career wins (563) and state titles (eight), but those are not the memories she chose to talk about in her most recent interview.

“It’s all about seeing the successes of the kids that came through the programs here and in Carlin, seeing them grow up and so many are so successful,” Davis said. “It’s the only real thing that can come from teaching and coaching is seeing the people that turn out to be successful and make a difference in the world.”

Davis first came to Elko County in early 1971 during her senior year at BYU while in route to a conference in Berkley, Calif. During the bus ride through Elko, she recalled thinking at the time that she couldn’t be paid enough to live in a place like this. Six months later, a job at Carlin High School was the only offer she had after graduation. Fast forward 49 years, thousands of sporting events coached or watched since, thousands of students taught and possibly a million or so miles logged on bus trips, and Davis cannot fathom having been anywhere else.

Neither could her former players, many of whom struggled with emotions when trying to put into words the impact Davis had in their lives.

“She’s definitely the reason I went into education and coaching,” Alice (Campsey) Digenan, who was a freshman on Davis’ first varsity team at EHS in 1980. “I wanted to have the impact on players and young women that she had on me. I wanted to pay it forward.”

As in so many cases, Davis did not limit her impact to a few basketball seasons. Digenan said her former coach has remained in touch with so many of her former players, and Digenan’s own children look at Davis as a grandmother because of the continued role she has played in their family for so many years. Digenan’s family is not alone.

Rogers, like Digenan and many others, returned to Elko to teach and coach. A couple of years ago, when Rogers’ daughter was leaving to play collegiate soccer in Alabama, it was Davis who showed up on her front porch with a card and to talk.

“For us that live in Elko, we all went through a transition from calling her coach to calling her Lynette,” Rogers said. “For her to treat us like a colleague and a friend … we just all have so much respect for her.”

Karen Hoem, who played guard on the 1989 state title team, took over the reins of the EHS girls basketball program after Davis stepped down to assume to the AD role in 2003. She had the opportunity to call Davis her coach, her friend and her boss, but most importantly, Hoem refers to her as her family.

“She’s like family to me,” Hoem said. “When my mother passed, she was the first person I talked to. She’s supported me 100 percent, and she will do whatever it takes to help you be successful.”

Another example of a former Davis disciple who went into education is Tony Peters, who won two state titles in 1994 and 1995. Those final two titles came after Elko moved into the large-school division in Nevada, which was the 3A at the time, and Davis was the first coach to win state titles at all three classifications 1A, 2A and 3A. Peters said her former coach is definitely a reason she too went into teaching, coaching and administration.

“She always had high expectation for us and instilled in us life lessons,” Peters said. “She taught us anything is possible. Being in education myself, I can say I have more respect for her now that I can see how much she had learned and adapted during these past 40-plus years. I also know I can call her anytime and get advice as a friend. It’s just the person she is and there won’t be another one like her.”

Of course, this is a small testimonial of the hundreds of players she coached and thousands of students she taught, but her impact did not stop at the borders of Elko County. Davis is a pioneer in women’s sports in the Silver State.

When she arrived at Carlin in 1971, Title IX was still on the horizon and girls sports were often an afterthought, if they existed at all. She had to fight for her teams to get access and attention. Once she got those, she quickly earned respect. Davis acknowledged that winning was crucial to getting the support the program needed, especially in those early days.

“I told the girls that you have to do things that will make people want to come and watch,” Davis said.

She and her players did that with historic numbers in wins and championships regardless of the competition. Davis was also one of the first girls coaches to push her players as hard as their male counterparts. She said she did that because it was all she knew.

“If you watched basketball on TV or went to a clinic, all the coaches were men back then. There weren’t many female coaches back then,” she said. “When you had someone like me who was trying to build a program and was not just a warm body, I knew I had to do more.”

Davis got her teams involved in summer camps, held rigorous practices and took players to participate in summer all-star teams in Idaho. She always went the extra mile for her players, and they followed the example of their coach.

Rogers said many of the girls basketball players were multi-sport athletes in the 1980s, but they would always devote their spare time to “whatever Lynette wanted us to do” because they knew she was dedicated to their success.

Davis’ successes on the hardwood forced athletic directors throughout the state of Nevada to take notice. They realized if they were going to ever catch Davis, who earned the honor of National Coach of the Year in 1990, and her Lady Indians, they would need to find coaches willing to invest in their players like she did.

“The level of intensity we got from Lynette, we didn’t get from anything else,” Digenan said. “She developed within us the ability to stay focused through adversity, take criticism and never be satisfied with a previous success. She made us play our game no matter what the score.”

It is how Davis has lived her life, and while she knows the clock has hit zero on her teaching career, she is not giving up her competitive edge or her love windshield time. She remains active in the sport of pickleball in Elko and is looking forward to getting out and traveling again. Of course, she has traveled almost everywhere in Nevada.

Martin Harris worked as the Free Press Sports Editor from 2004-2014 and now works in healthcare administration in Texas.

ELKO — Spinning a perfect game for a bowler is the ultimate highlight.

Although his final year of high school has been surrounded by hurdles and question marks, Walund has signed his national letter of intent to run cross country for Montana Tech, in Butte.

After cinching up his seventh berth to the Wrangler National Finals Rodeo in late September, there was still work to be done for Elko’s Dakota Eldridge.

Carson Strong threw his fourth touchdown pass, a nine-yarder to Romeo Doubs in overtime as Nevada beat Wyoming 37-34 on Saturday night in the …

BOISE, Idaho — No fans were on hand to witness Boise State’s 42-13 season-opening win over Utah State on Saturday evening, but if they had, th…

Nevada cowboys Dakota Eldridge and Jade Corkill, along with California saddle bronc rider Lefty Holman — who has deep ties to the Silver State — will chase money, fame and gold buckles at the 2020 Wrangler National Finals Rodeo. The WNFR will take place at Globe Life Field — the home of the Texas Rangers — from Dec. 3-12, 2020, in Arlington, Texas, the first time the iconic rodeo will not be at Thomas & Mack Center, in Las Vegas, since 1985, due to Nevada Gov. Steve Sisolak's COVID-19 directives.

Elquist returns to playing basketball, walks on at the University of Nevada

ELKO — There is no quit in Alexis Elquist; she simply took a break.

RENO — Nevada will appear on national television in at least seven of its eight games this season, and two Wolf Pack games have shifted days a…

Former Elko head girls basketball coach Lynette Davis is shown on a ladder with a ball near the rim. In her career, she won 563 and claimed eight state championships across the 1A, 2A and 3A divisions. Davis is retiring after a 49-year journey with the Elko County School District as a teacher, coach, administrator and a mentor.

Head coach Lynette Davis, center, talks to a former Elko High School girls basketball team during a timeout. Davis is retiring after 49 years with the Elko County School District, a coaching career marked with 563 wins, eight state championships and lasting memories she leaves as a teacher, coach, administrator and a mentor.

Former Elko girls head basketball coach Lynette Davis gives instructions to her team during the 1995 Division 3A Nevada State Girls Basketball Championships. Davis and the Lady Indians repeated as the 3A state champs, capping her eight-state titles as a coach across three divisions.